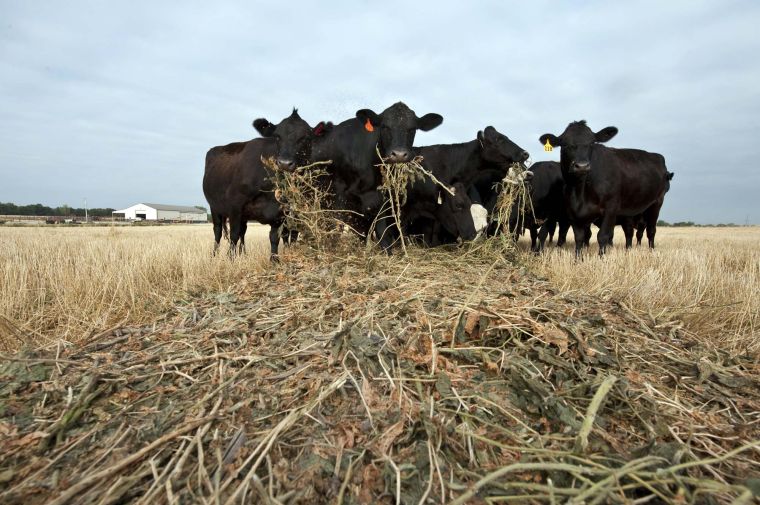 Most summers, the pastures are lush for Brent Gundy's Brangus cows in Walker, Mo., but he has been feeding them hay and now soybean bales to help them get through the high temperatures. 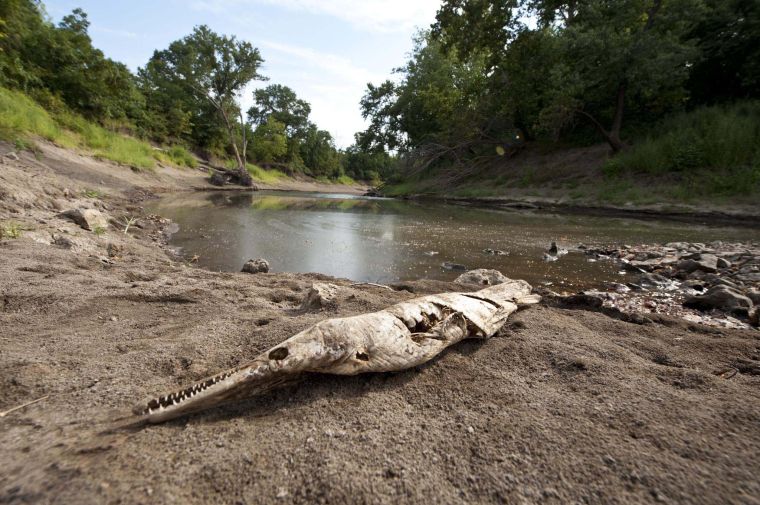 Depleted oxygen levels during prolonged periods of high temperatures kills fish like this gar on the banks of the Osage River at the Four Rivers Conservation Area in Missouri. 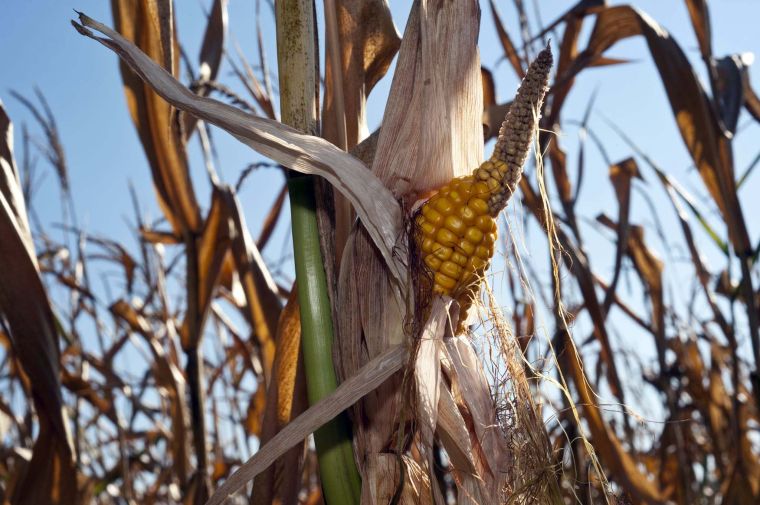 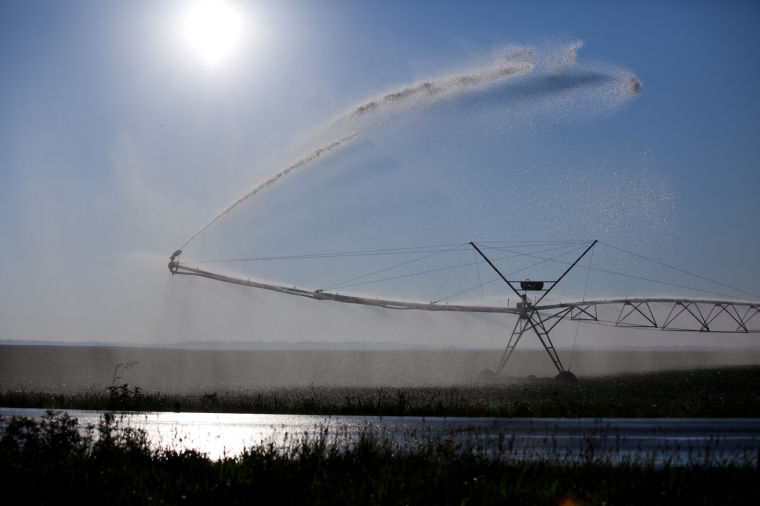 Most summers, the pastures are lush for Brent Gundy's Brangus cows in Walker, Mo., but he has been feeding them hay and now soybean bales to help them get through the high temperatures.

Depleted oxygen levels during prolonged periods of high temperatures kills fish like this gar on the banks of the Osage River at the Four Rivers Conservation Area in Missouri.

Driving by a boat ramp one Saturday morning last month, a local man noticed some white spots on the Des Moines River. He stopped to have a look.

Turns out the spots were fish bellies. The undersides of dead sturgeon formed glistening constellations in the muddy brown water.

In all, about 58,000 dead fish were along a 42-mile stretch, according to state officials, and the cause of death appeared to be heat. Biologists measured the water at 97 degrees in multiple spots.

"I've never seen anything quite like it," Justin Pedretti, who owns a farm near the boat ramp in Bonaparte, Iowa, and first reported the fish kill.

Under the most wide-reaching drought since 1956, and torched by the hottest July on record dating from 1895, the United States has been under the kind of weather stress that climatologists say will be more common if the long-standing trend toward higher U.S. temperatures continues. Most immediately affected are the nation's water sources and the people and crops that rely on them.

The flow of the Mississippi River has slowed — at times rivaling 40-year-lows — allowing saltwater from the Gulf of Mexico to seep far up the river channel, threatening community water supplies at the river mouth. Likewise, across the nation's middle, many communities have invoked water restrictions to protect shrinking supplies. The lack of rain has sizzled the nation's corn crop, too, with agriculture officials reporting last week that the overall yield is expected to drop 16 percent from last year.

Scott Lakin, owner of a family farm in Indiana, was already dealing with the drought harming his corn crop. But his wife recently called with the discovery that the weather woes were striking much closer to home.

"I heard the washing machine making sounds — it wasn't filling," Marcy Lakin said. "Then I checked the faucets and couldn't get even a drip."

The well was dry. The water table in the area had sunk to new lows, and like other homeowners in Parr, Ind., they were without water. When they sought out a well-driller to try to find water, they found that drillers across the state were booked for a week.

The Lakins, with two kids, have gone almost two weeks without water.

"I think you could say it's been a trying summer," she said. "Everybody was looking for water."

In 1895, the first year of such records for the nation, the average July temperature in the contiguous states was 72.1 degrees.

Since then, average temperatures have been rising, if slowly, according to U.S. records, climbing at the rate of 1.24 degrees per century.

This year, average temperatures spiked to 77.6 — even above the long-term trends, the National Oceanic and Atmospheric Administration reported last week.

At the same time that temperatures have spiked, setting records in places as far-flung as Lansing, Mich., and Greenville, S.C., the country has been hit with a spreading drought. In early August, 62 percent of the contiguous United States was under moderate to exceptional drought, according to the U.S. Drought Monitor.

The heat and drought feed on each other, worsening conditions, scientists said. When the ground is wet, the water absorbs the sun's heat and expends it in evaporation; when the earth is dry in a drought, the ground simply warms up.

The rising temperatures and spreading drought this year are consistent with what can be expected with the warming of the climate, said Jake Crouch, a climate scientist with NOAA.

"Any given year in the future could be above or below that rising trend," Crouch said. "But if the current trend continues, the chances of years like this become greater."

The Midwest is particularly vulnerable to large swings, according to federal scientists, in part because it is farther from the oceans, which help to moderate temperatures.

"There is a high degree of confidence in projections that future temperature increases will be greatest in the Arctic and in the middle of continents," according to the U.S. Global Change Research Program.

Maybe the broadest and most easily measured casualty of the weather has been the nation's corn crop, one of its largest. With the losses, corn futures last week rose to all-time highs.

But the extreme weather has also aroused unusual challenges.

The Mississippi River has fallen so low that the American Queen steamboat, which had been on its way from Louisville to Vicksburg, Miss., had to stop this month in Memphis, according to wire reports. That left 240 passengers to finish the trip by bus.

In Plaquemines Parish, La., at the mouth of the Mississippi, government officials are preparing to have fresh water brought in on barges, something they haven't had to do since 1988, during a historic drought, said Guy Laigast, director of the parish's emergency preparedness. The problem is the growing salinity of the Mississippi as it runs by Plaquemines. Some saltwater seeps in from the gulf regularly when the river is low. But this year, the saltwater has seeped about 88 miles up the river, rendering it unusable for some towns.

In Kansas, along Big Creek, which is running dry, the drought has put communities at odds with one another. Upstream, Hays is keeping its wastewater to water a golf course, a park and a soccer complex. This has angered downstream neighbors, who say public wells are running low and there's no water for their cattle.

"Everyone out here is hurting. There is no two ways around it," said Doug Langhofer, water superintendent in Russell, Kan., one of the communities downstream.

Across the country, scientists are beginning to register the stress that higher temperatures have placed on the environment.

On the night of the fish kill that Pedretti reported on the Des Moines River, state biologist Mark Flammang was called to the scene.

"We've had fish kills before but never to that extent," he said.

Often, he said, fish kills come when the oxygen content in the river goes low. But the measurements he took that night suggest to him instead that it was probably the unusually warm water.

Another fish kill in the Des Moines River happened just two weeks ago, and again the water temperature was high. This time, it was about 92 degrees in places, and it claimed about 13,500 fish, mostly river carpsuckers and channel catfish, he said.

Where those temperatures stand in terms of the river's history is difficult to know because there are few, if any, consistent records. But Flammang and locals familiar with the river think those temperatures were well above normal summertime averages.

"The water normally has a chill to it," said A.J. Bower, 26, who runs a local Web site for enthusiasts. But "the heat is killing the fish. You can tell it's not supposed to be that warm."

"Mother Nature," he said, "is kicking our butt."