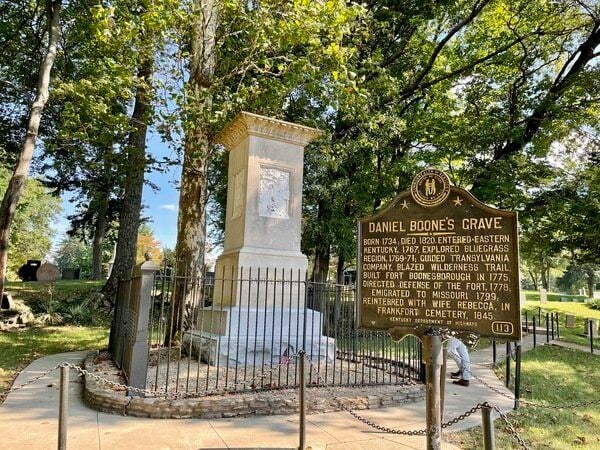 The gravesite of Daniel Boone and his wife Rebecca is located in the Frankfort Cemetery in Frankfort, Kentucky. 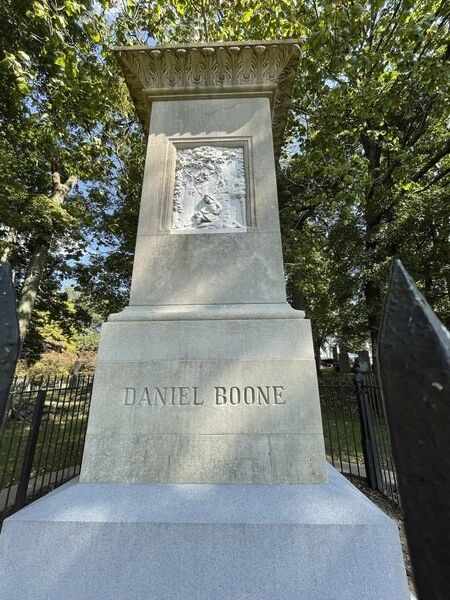 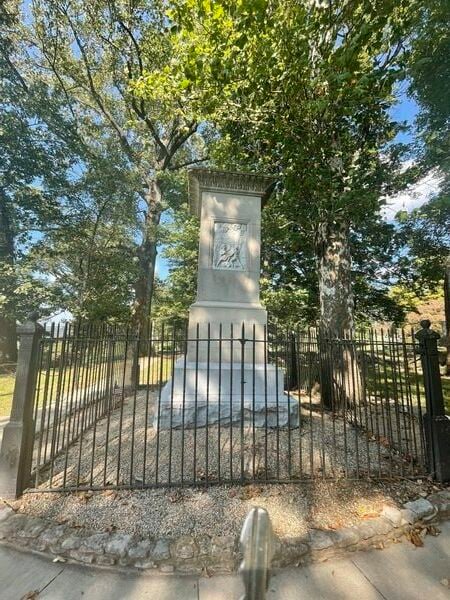 The gravesite of Daniel Boone and his wife Rebecca is located in the Frankfort Cemetery in Frankfort, Kentucky.

"Heaven must be a Kentucky kind of place." - Daniel Boone

This is a fitting quote for the sixth item listed in the Kentucky Bucket List book written by Michael Crisp. The book features 100 experiences in the commonwealth. This task was to visit the gravesite of Daniel and Rebecca Boone at Frankfort Cemetery overlooking the Kentucky Capitol.

I made the trip to Frankfort this Sunday by myself and enjoyed lunch at Bourbon on Main, walked around downtown, and paid my respects at the cemetery.

So must of us in Kentucky, and many outside of the state, know who Daniel Boone is. Boone is a legendary frontiersman and war lieutenant who is most known for his exploits in navigating and settling the bluegrass region.

Born on Nov. 2, 1734, Daniel Boone grew up in Oley Township northwest of Philadelphia, according to the American Battlefield Trust.

As a young man, he spent many hours alone in the forest where he developed and refined the skills which one day would make him famous. At the age of 15, he left Pennsylvania with his family following a break with the Society of Friends (better known as the Quakers). Boone resided for about a year in Virginia’s Shenandoah Valley before he finally settled along the Yadkin River in North Carolina, according to the trust's website.

For many years he yearned to explore Kentucky. Before this happened, Boone married his wife Rebecca Aug. 14, 1756. Their marriage spanned more than half a century and produced 10 children, despite Boone’s long absences. Boone began his explorations in Kentucky in 1769, when he led an expedition which discovered a trail to the west through the Cumberland Gap. In 1775, he settled Fort Boonesborough in Kentucky, where he faced Indian resistance.

This fort is one of the earliest English-speaking settlements in the Appalachian Mountains — and is located right here in Madison County!

Known as a folk hero and famous American pioneer, Boone also wore many hats as a surveyor, tavern keeper, merchant, legislator, and militia officer of the Revolutionary War.

In the summer of 1783, well into middle age, Boone spoke with schoolteacher John Filson who embellished notes turned over by Boone for the book "The Adventures of Col. Daniel Boone," which appeared as an appendix in "The Discovery, Settlement and Present State of Kentucke."

Even after the books publication, which was very popular with readers, Boone struggled to make a living.

He became frustrated with legal land claims and Boone left Kentucky in 1799 and relocated to a Spanish Territory in Missouri. Here he received land grants from officials and was appointed as a syndic. Whatever land Boone was able to sell was used to pay debts back home in Kentucky, according to the trust.

As Boone aged, his eyesight deteriorated and he received many travelers coming by to meet him. The trust website says his wife Rebecca died tragically in March 1813, and Boone died seven years later in September 1820.

Here's where it gets even more interesting.

While his life yields much lore and history of great exploration and discovery, his death and burial is shrouded in mystery and controversy.

It is widely speculated that Daniel Boone is not actually buried at the Frankfort Cemetery alongside his wife.

According to Frankfort Tourism, in the 1840’s Judge Mason Brown and other community leaders decided to create a new cemetery. They thought it would help to promote the new cemetery to have famous people buried there. At that time, Daniel Boone was buried in Missouri, however, representatives of the cemetery convinced Boone’s son to allow them to rebury his parents’ remains in the new cemetery with a big memorial.

The Boones were the first to be laid to rest in the cemetery, which overlooks Frankfort and the Kentucky River, with a great ceremony in September1845 featuring the governor and other dignitaries.

Frankfort Tourism stated, although everyone agrees Rebecca Boone is now buried in the Frankfort Cemetery, there is considerable controversy about where Daniel Boone is buried.

In addition it is stated, Daniel Boone outlived his wife by so many years, that by the time he died, the spot next to Rebecca was occupied, so Daniel was buried at her feet.

If this is true, Daniel Boone could possibly still be buried in Missouri and some unknown person is buried beside Rebecca in Frankfort as the body exhumed long ago was the one resting beside her.

In an article from the New York Times published in 1983, anthropologist David Wolf suggested the body was likely not Boone, but an African American slave.

"Dr. Wolf said today (July 23, 1983) that he had found several clues that a plaster cast of Boone's skull in the Kentucky Historical Society Museum was that of a (slave.) But he said the cast, made by the Rev. Philip Slater Fall the night before Boone's reburial Sept. 13, 1845, did not reveal enough of the person's head for him to make a conclusive judgment," the article stated.

According to a 1921 newspaper article, when Daniel Boone died at the age of 85 in 1820, gravediggers found the remains of a stranger beside Rebecca Boone in the Marthasville (Mo.) Cemetery. The dirt was placed back over the stranger and Daniel Boone was buried at the foot of Rebecca's grave. Because of the confusion, say the Missourians, a monument was placed at the head of the stranger's grave 16 years later, wrongly identifying it as Boone's grave.

Regardless, the site still commemorates the frontiersman and his wife with a monument built by John Haley in 1860, according to Frankfort Tourism. In 1862, Robert E. Launitz added four marble panels depicting scenes from the couple's lives. One showed Daniel fighting two Native Americans. Another showed Rebecca milking a cow. A third showed Daniel speaking to a boy, and the fourth showed him in front of a cabin with deer he had killed.

The panels were vandalized during the Civil War and restored in 1906 and restored again in the 1940’s after a tree fell on them. Only one of the original panels still exists and is on display at Waveland State Historic Site in Lexington.

The cemetery was really peaceful and easy to find. It was large, with several monuments and different dedication areas inside the cemetery, which included Boone's site, a memorial for soldiers, a memorial for the unborn, and several other burial places of notable Kentuckians.

Easy to navigate, there were plenty of signs as well as lines marked on the road to find the monument. The structure sits on the hill which overlooks the entirety of the city of Frankfort with a breathtaking view. The capitol is also in the view which was simply the highlight of my visit.

During my about 30 minutes spent there, there were visitors coming and going from the monument continuously. Frankfort Cemetery welcomes and encourages visitors, school groups, and touring groups to pay their respects to the Boones and countless others. However, it is still a functioning cemetery with available plots.

The management of the Frankfort Cemetery requests all touring groups of any kind please contact their office prior to scheduling an event at 502-227-2403. The office is open Monday through Friday from 8 a.m. to 4 p.m. and is closed at lunch.

In addition, there will be a re-dedication of the Daniel Boone highway marker on 10:30 a.m. on Oc. 22, which all are welcome to attend.