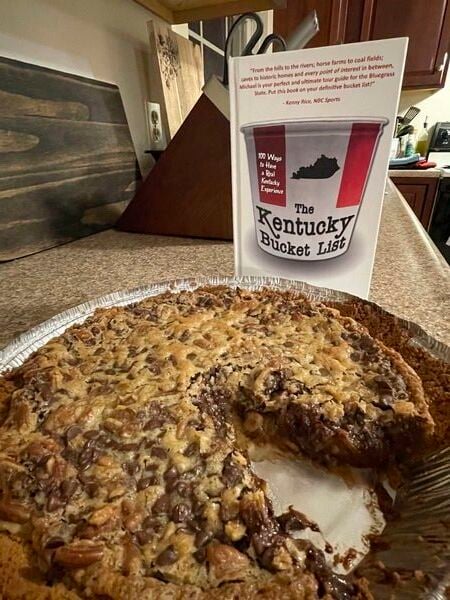 A chocolate and nut pie was made to complete item number 44 on the Kentucky Bucket List. 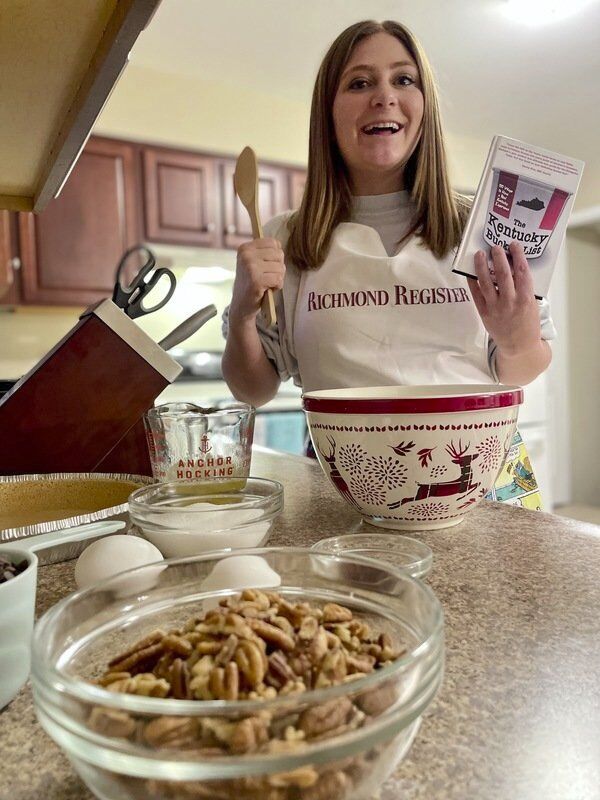 A chocolate and nut pie was made to complete item number 44 on the Kentucky Bucket List.

"I don't want to spend my life not having good food going into my pie hole. That hole was made for pies." — Paula Deen

This is the quote listed below item number 44 on the Kentucky Bucket List written by Michael Crisp, which contains 100 experiences throughout the state of Kentucky.

Item number 44 is to eat a Derby-Pie®, also known as a chocolate and nut pie.

The first Derby-Pie® was created in Prospect, Kentucky in 1954 by Kern’s Kitchen. The infamous family bakery's chocolate nut pie was first made by Leaudra and Walter Kern, along with their son, George at the Melrose Inn which they managed.

Once their secret recipe was perfected, they decided it needed the perfect name along with it. Because each family member had a favorite, the name Derby Pie® was actually pulled from a hat and was later registered with the U.S. Patent & Trademark Office as well as the Commonwealth of Kentucky. The recipe is kept secret, known only to a small group of Kern family members.

However, it is known to include premium chocolate and choice walnuts are folded into a homemade filling, then baked in a delicate crust, crafted daily, and one at a time at Kern's Kitchen.

In 1960, just four years after their first pie sale, they had sold over 1,000 pies to the public. Just one year later, the Kern family left the Melrose Inn as managers, but continued to sell Derby-Pie® to the restaurant until it closed in 2000, according to their website. At that time all pies were made at their home kitchen three at a time in a small mixer.

Around 1973, the family began to receive help from a man named Alan Rupp, who would commute from college to the bakery to assist during Kentucky's Derby season. While customer numbers were around 15 individuals in 1973, several other restaurants began to arise and in 1976, the Kern's doubled production with two Frigidaire kitchen oven ranges baking six pies at a time to one Vulcan gas convection oven baking 24 pies at a time.

The next year in 1974 — just over 20 years after Derby-Pies® creation — 10,000 pies sold. This would be the same year creator and patriarch Walter Kern would pass away, according to the Kern's family timeline. Other notable dates include when the largest ever Derby-Pie® was baked by the Kern's and was 12-feet in diameter and served at the grand-reopening of the Kentucky Derby Museum.

Five years later, Kern's Kitchen partnered with the Kentucky Derby Festival. In 2005, more than 100,000 pies were sold in a year.

As mentioned, Kern's Kitchen trademarked the name Derby-Pie® upon its creation. The advice was first given to do so by Walter Kern's friends, Ed Hasenour & Judge Merhige in 1964. Heading this advice, the Kerns filed for the trademark that same year.

According to the family's historic timeline, on October 7, 1969 – Kern’s Kitchen is granted a Federal Trademark on the Principal Register from the U.S. Patent and Trademark Office for Derby-Pie®.

Kern's Kitchen diligently guards the trademark and has filed more than 25 lawsuits to protect it over the years. In 1982, Federal Judge Charles M. Allen issues the first order enforcing the Derby-Pie® trademark. Kern’s Kitchen has successfully enforced the Derby-Pie® trademark throughout the years against Bon Appetit Magazine, Sweet Streets Desserts and Nestle Foods to name only a few.

In May of 2018, it was reported Kern's Kitchen sued the Courier Journal Newspaper for more than $1 million over claims of trademark infringement, dilution and unfair competition.

According to a story from the Louisville Business Journal, the plaintiff, Alan Rupp, the president of Louisville-based Kern's Kitchen Inc. and claimed in a complaint filed in the U.S. District Court of Western Kentucky that local media outlet the Courier Journal, a Louisville-based USA Today Network affiliate, inappropriately used the phrase Derby-Pie® in multiple publications over the last year or so.

In exhibits attached to the complaint, the Courier Journal published a story about and a recipe for a pie it called "this Derby pie" in the article headline and "Derby chocolate-walnut pie" in a subhead for the recipe in its paper in May 2017; used the phrase "Derby pie" in a caption of a photo of macarons in a June 2017 publication; and has several stories on its website that are recalled using the search term "Derby pie."

In January of 2021, a federal judge dismissed the complaint in its entirety and determined it was implausible to think a consumer would believe the newspaper owned the trademark or manufactured the dessert.

While I merely learned this history of the Kern's Kitchen and their famous Derby-Pie®, I decided to make a copycat recipe I found online instead of traveling to Kern's locations (the book didn't specify I needed to do this either so I spared work the gas milage).

In the recipe I discovered online for a chocolate nut pie, it is really easy to make. There were in total online about seven ingredients which included butter, sugar, eggs, chocolate walnuts or pecans, vanilla, and a crust.

Recently, aside from writing about my experiences in the paper, I have also been posting pictures and videos on social media of what I am doing with the bucket list. This includes Tik Tok, a video-focused social networking site, where I put a few brief short clips and sound bites. I once again enlisted the help of Isaac to help film and make the pie.

He followed me along while I was mixing and making the filing to go into the pie, while helping me with the ingredients. In total, the process of mixing took about 10 to 15 minutes with us filming. However, when it was time to put the filling in the crust (which was store bought), Isaac thought it would be necessary to "get some of the crumbs out of the pie shell" and decided to put the whole graham cracker crust over the mixing bowl where the shell crumbled into the filling mix.

I wish I had on recording the look of sheer horror that he messed up everything on his face, and the absolute perplexity on my face of "Why in the heck did you do that?" To top it off, it was the last pie shell that Kroger had.

However, before any rash decisions were made or comments of annoyance, we decided we would salvage what we could of the crust, break it up and re-form it. This worked out perfectly, and gave us both a really great laugh in the end. The pie was baked and enjoyed with a large glass of milk! Thirty-six adventures down, 64 to go!

Recipes can be found online for similar chocolate-nut pies.

If you would like to visit Kern's Kitchen they are located at 2420 Ampere Dr. in Louisville. For more information, visit, derbypie.com/pages/find-me-the-pie.