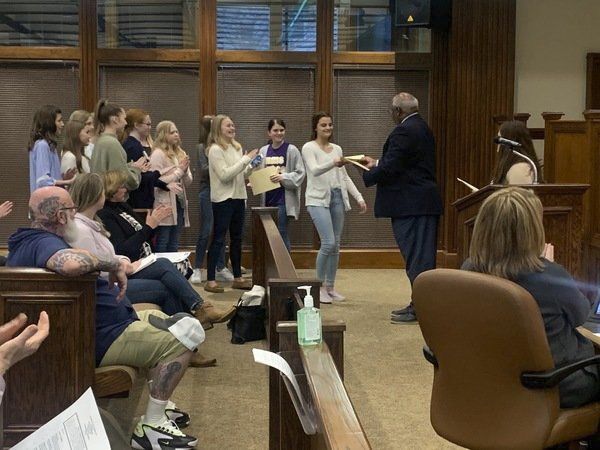 Ella McDaniel receives recognition for becoming a state champion with the Madison Middle Dance Team at the start of Tuesday's meeting. 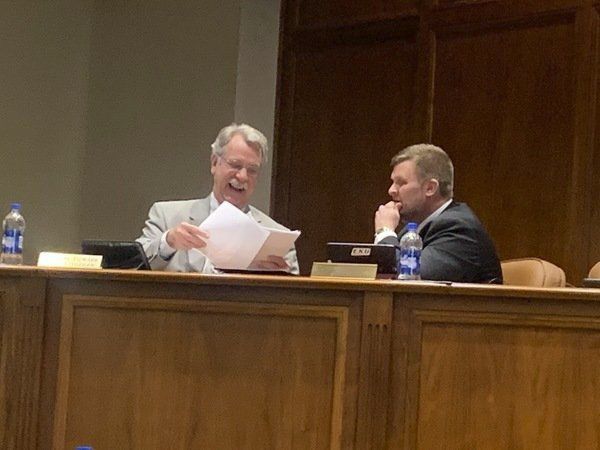 City Attorney Garrett Fowles laughs with Ed McDaniel before announcing his retirement from the city after 19 years.

Ella McDaniel receives recognition for becoming a state champion with the Madison Middle Dance Team at the start of Tuesday's meeting.

City Attorney Garrett Fowles laughs with Ed McDaniel before announcing his retirement from the city after 19 years.

With the announcement of the fiber-optic network MetroNet coming into the city of Richmond, city officials told homeowners to expect repairs and construction to install the technology, which many were initially excited about.

But property owners experiencing the first round of construction near Fieldstone and Hampton subdivisions spoke at Tuesday evening's meeting saying they got more than they bargained for.

A handful of residents spoke of torn-up yards, massive amounts of rocks, raised driveways and lowered sidewalks as a result of the early installation process by MetroNet's subcontractors.

"This is some pretty massive yard damage," said one woman of Fieldstone subdivision who claimed the contractors had broken her sewage pump and did not inform her. "They ended up fixing the pump, but not telling me about damage done to my home is an integrity issue."

City Manager Rob Minerich told members of the audience and the commissioners that MetroNet has a 100% commitment to fixing property and that the city is holding the company accountable through complaint tickets that can be filed at city hall.

"What I am hearing tonight is a lot of frustrated people, and that is not how we want to operate business," said Kris Smith, a representative with MetroNet. "As soon as we know about damage, we have 100% commitment to fixing it, safety and communication. If we put out a great fiber infrastructure, but if we make everyone mad, then we aren't going to get any customers."

Smith said already, with the limited amount of footage installed, the company was not comfortable and concerned with the amount of complaint tickets they have received.

Commissioner Jason Morgan expressed his distaste with the issue at hand, saying he was entertaining conversations with the city attorney to pull out of the contract.

He referenced an earlier conversation at a previous workshop meeting in which he claimed Smith stressed communication, but said he had only seen a lack thereof.

"You promised us communication, communication, communication," Morgan said. "You would notify the neighbors of what you would be doing. It is unfortunate that our city clerk is not here tonight, because she never received notification in her neighborhood. You made a promise, and that is OK 'cause sometimes I make promises and I fail. But we are starting on the back track."

He made notes of calls he had received regarding construction, saying a new mother went without water an entire day with no notification, and in another area, a woman called the contractor to complain about a problem, receiving the response: "At least it wasn't your water."

Commissioner Ed McDaniel said he was receiving complaints of some of the contract workers leaving their takeout Chinese and pizza boxes from their lunches.

"That is not the right answer," McDaniel said.

"Right now, they're mad. They wouldn't buy it if you gave it to them with a $25 bonus," Commissioner Mike Brewer said. "They are upset, and we are too. … We all agreed this was a great project. We voted on it, and I still think it is a great project, but I can't allow damage to these people's property and let it continue."

Minerich reminded audience members that if they have a problem, there is a ticket process to address the issue which must be responded to within 24 hours.

"If there is an issue, and you don't get a response, call city hall. Trust me, call me, I will give you my cell phone, we will chase it down," Minerich said.

• After nearly 19 years with the city of Richmond, City Attorney Garrett Fowles announced his plans to retire after the summer.

• Ordinance 20-04, a document that raises residential, commercial and industrial gas rates by $3, was barely approved and adopted with a vote of 3 to 2, with Commissioners Ed McDaniel and Mike Brewer voting against it. Scott Althauser, the director of Richmond Utilities, said the increase was to generate revenue and help pay for maintenance of gas lines.

• KU Energy LLC was awarded an electric distribution franchise within the city for a duration of 20 years to commence in April 2020.

• Cory Hawk and Kyle Morrison were hired to work full-time for the Public Works Department.

• Walters Concrete LLC was awarded the bid for the Lake Reba basketball courts project in the amount of $49,525.

• Stephan McFerron with the Richmond Police Department was hired as a traffic and parking control attendant.

• Pyrotechnic Display Inc. was awarded the job for the annual firework show at Lake Reba in the amount of $21,000 plus an additional $2,000 for an optional display.