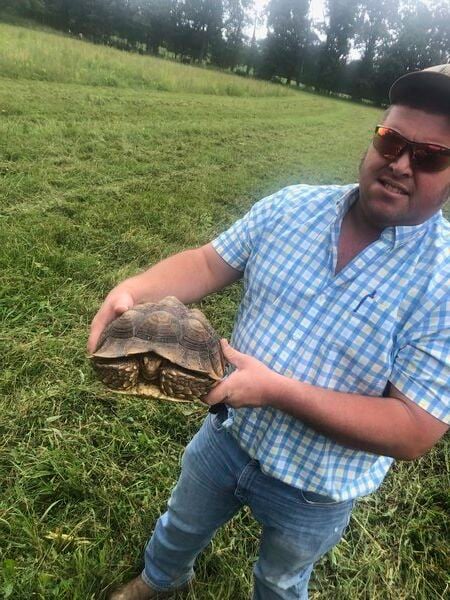 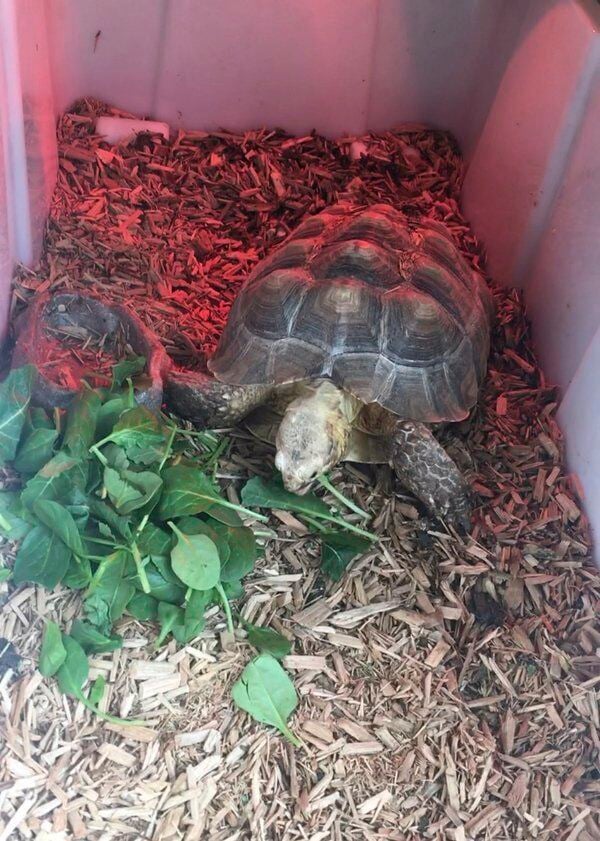 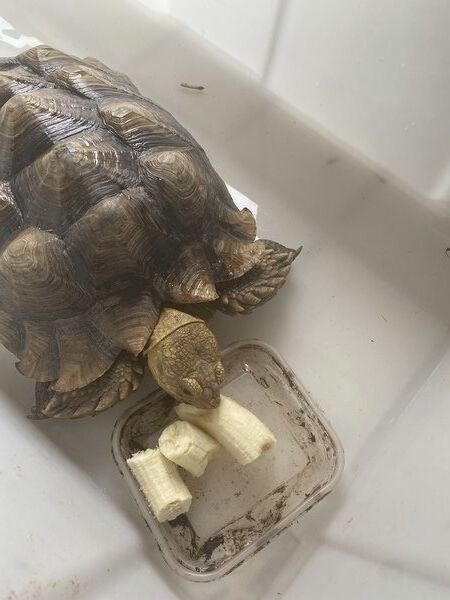 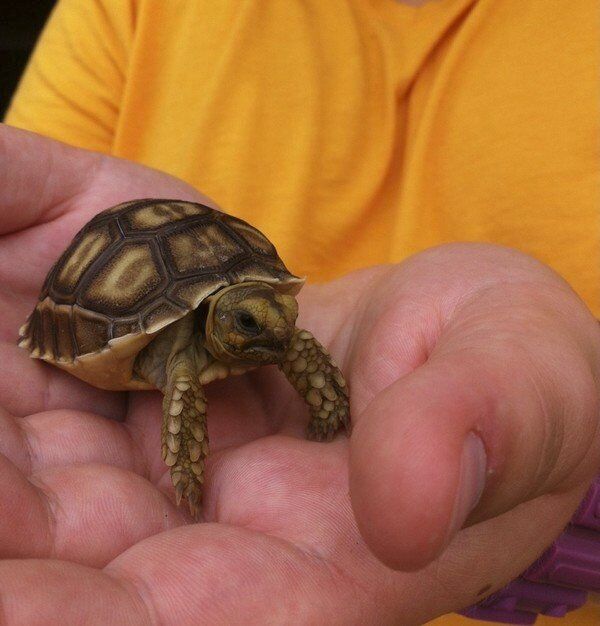 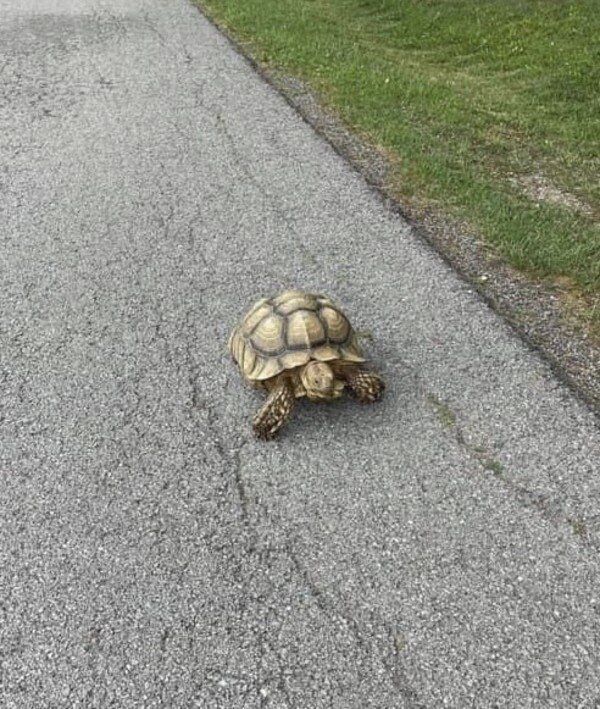 For almost a month, an extensive search and rescue mission has been underway in southern Madison County.

On Monday, that quest ended.

After 29 days and a journey across several miles and at least one cow pasture, Topaz the African Sulcata Tortoise is finally back at home.

Topaz's family said his safe return would not have been possible without the community's help.

"I can't thank the community enough for their concern. I was totally shocked by how much everyone wanted to help and chip in with trying to find him. Everyone knew how important he is to us and for the community to take the time to share his photo and be on the watch for him -- it's just really incredible," Topaz' owner, Ty Allen, said Monday afternoon.

According to family members, the tortoise traveled more than four miles throughout the last month and a half.

"He came home dirty and slightly bigger, but, incredibly, he doesn't have a scratch or mark on him," Toney Allen, Ty's father said. "I told him he was one lucky fellow when I picked him up and brought him home."

Luck was indeed with tortoise, who weighs about 10 pounds and is roughly the size of a dinner plate.

Topaz was literally inches away from death when he was found by Bo and Katie Tate around noon.

According to Bo Tate, he was bush-hogging a pasture on his farm on Crooksville Road when he noticed his wife and sons had arrived home from their vacation.

Bo Tate said he just happened to stop his tractor at that moment and looked back on his progress. That's when he noticed a strange object between the tire tracks.

"I knew it wasn't a snapping turtle and I had seen on Facebook that a tortoise like that one was missing," Bo Tate said.

Katie Tate said her husband motioned her and their two boys over to the tractor to to make sure it was, indeed, the wayward Topaz.

"It was crazy," Katie Tate said when she realized her husband had found the elusive tortoise. "We were so excited. It's kind of miraculous he was found -- it really was like a needle in a haystack situation."

Bo Tate said he is grateful that he was mowing high.

"I just straddled him with the tires and the bush-hog. You could see the tire tracks and he was in the middle of them. I was mowing high and the blades were high enough, they didn't even touch his shell," Bo Tate said.

The Tate's quickly snapped a photo and sent a picture to Jennifer Muncy, Ty's mother, who confirmed the tortoise's identity.

"It couldn't have been two better people that found him," Toney Allen said. "I happened to know Bo. He's a Madison County firefighter and his kids have turtles as well."

While waiting for Toney Allen's arrival to retrieve the lost pet, the Tate's supplied Topaz with three green tomatoes and a carrot from their garden.

"He ate every bit of it," Katie Tate said with a laugh.

Toney Allen, who is a Kentucky State Trooper, said when he got Topaz home, the tortoise also received a banana.

"It was his reward for coming home," he said with a laugh.

Ty Allen, who is a senior at Murray State and is currently taking summer classes while majoring in biology, said Monday he could not wait to see Topaz again.

"I'm just relieved. I've had him since I was 13-years-old," Ty Allen said. "He is very special to me and I plan to have him around a long time. He'll likely outlive me -- sulcatas can live to be around 100-years-old -- I'll probably have to will him to someone when I die."

It was happy ending to a months-long missing tortoise case.

Topaz's slow and steady journey began on June 13 when he escaped his outside enclosure on Toney Allen's farm on Highway 421.

The trooper said he had returned home from a baseball tournament and went to check on Topaz as he does every night during the summer.

"I opened it up and looked, and my heart just sank. It was the worst feeling in the world, I'll never forget that. I was like, 'Oh my gosh, where's Topaz?'" Toney Allen said.

Muncy, who is a principal at Madison Southern, was heartbroken as well when she heard the news.

"I knew Ty would be devastated. We all immediately started looking for him. We called and told Ty and he was so upset. He loves animals and loves Topaz. He's had that tortoise since it was a baby and could fit in the palm of Ty's hand," Muncy said.

Ty Allen said he was shaken up by the news and worried for his pet.

"The first two days after I heard he was gone, I was completely in shambles. I just kept hoping he would find his way back. I was hoping people would just see him and notice him. He looks non-native so hopefully people would know he's someone's pet," Ty Allen said.

Muncy said the family got to work making flyers and posted them in the Bobtown and Kingston area.

She also made Facebook posts asking the community to be on the lookout for Topaz.

To Muncy's surprise, the community responded in a big way.

People started sharing her posts and people in the community were actively looking for Topaz in their backyards, fields and neighborhoods.

After six days of searching, Muncy said she was contacted about a possible sighting of Topaz on Dreyfus Road.

Muncy said Ty Allen was in town for Father's Day and the family continued to search for the tortoise -- knocking on doors and explaining the situation to neighbors.

Then on June 22, the family got their first glimmer of hope.

Someone took a picture and video of Topaz at the end of Cedar Drive.

Unfortunately, the tortoise had disappeared once again when the family arrived to look.

Meanwhile, Ty, Toney, Muncy and her husband Brent, continued to ask people to be on the lookout for Topaz.

"Everyone was so wonderful and helpful. I will always be grateful to the people who have helped us look for Topaz and share his pictures. People have allowed us to search their fields and property and have been just so gracious. We have had complete strangers message us and look for him," Muncy said.

On July 7, Muncy was made aware of another sighting of Topaz when someone snapped a picture of the wandering reptile on Smith Lane.

That night, nearly the entire neighborhood was out walking the roadways looking for the tortoise.

Once again, Topaz slipped by them.

Ty Allen said he wasn't surprised the tortoise could cover so much ground so quickly.

"He is pretty fast when he wants to be. Sulcatas are from Africa and love the heat and sun and that is when they are really active. He had a lot of access to clover, which he loves, so he could just eat and graze and have a lot of energy to keep traveling," he explained.

Summer just also happens to be the mating season for the tortoises.

"That's probably why he got out in the first place," Ty Allen said with a laugh. "He was looking for love in all the wrong places."

Despite the despair of missing his pet, Ty Allen said he enjoyed sharing his love of Topaz with the community.

"We kind of spent a month getting the opportunity to really educate the community about sulcatas and tortoises in general. We were able to explain the difference between a turtle and tortoise, what their habits are, what they like to eat, what they look like. I love animals, always have, and its been amazing to see the interest Topaz has sparked in a lot of people as well," Ty Allen said.

While the tortoise might be the most famous reptile in Bobtown and Kingston at the moment, his family said his traveling days will be over for now.

"I'm definitely going to get a GPS tracker to put on him. So if he ever gets out again, we can find him easier," Ty Allen said.

"I didn't realize how strong he had gotten and that he could push the chicken wire I had up for him," Toney Allen said. "I'm definitely going to rework his cage and make sure its safe and secure for him."

While his family may never know exactly what Topaz was up to during his summer holiday, they are thankful he found his way home.

"We love him. He's the first thing I say hello to in the morning, and the last thing I say goodnight to when I go to bed at night," Allen said. "He's had an adventure, but I sure am glad he's back."