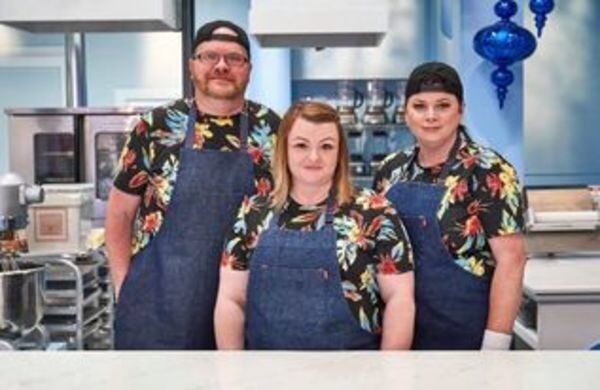 Becky Holman, Chris Holman, and Jan McNeal on the set of the Canadian Food Network show The Big Bake Holiday. 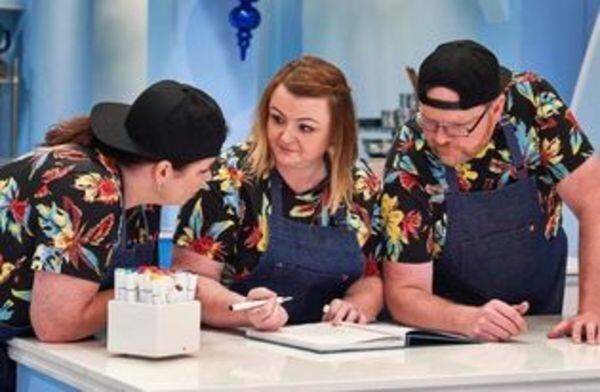 Becky Holman, Chris Holman, and Jan McNeal on the set of the Canadian Food Network show The Big Bake Holiday.

Becky Holman, lead cake artist at Bit of Whimsy Cakes in Richmond, her husband Chris, and her friend Jan McNeal did not have to huddle around a TV set to experience the thrill of a holiday cooking show.

Instead, they lived it.

Last year, in July of 2019, the Holmans and McNeal packed up and flew to Toronto, Canada. They arrived on a Sunday and the following Monday they were immersed in the behind the scenes life of being a Food Network star.

Their journey began when Becky received an email from a casting associate in Toronto.

The agent had apparently found her on Instagram. Upon seeing her posts of cakes she had made at her business Bit of Whimsy Cakes, the agent asked Becky to apply for the first season of The Big Bake Holiday.

This competition would require her, and two other team members, to compete against two other teams to make a cake that was at least five-feet-tall, two and a half-feet wide, and feature a dynamic element such as fire, lights, music, water, or moving parts.

During the application process Becky was tasked with describing her previous experience with baking.

"Baking was always something that I liked," Becky said. "When my kids were little I always wanted to be the mom that had the best parties. I stumbled upon cake making when my kids wanted a Star Wars cake. I ordered one but when it arrived I thought, 'I could do this...' It just snowballed from there."

Now, Becky has been baking for around 11 years. She is self-taught and found that learning how to bake from scratch was incredibly difficult, though she said the decorating part of cake making came easily to her with her artistic background and degree in interior design. After learning to bake, Becky opened her shop Bit of Whimsy and jumped head first into the industry. She explained she does a lot of special occasion cakes and most often they are for weddings.

During her application to compete on the show, Becky also was tasked with choosing her three teammates. The choice of her husband was a no-brainer. She explained Chris is talented at construction and at figuring mechanical things out.

"I help taste test all of my wife's cakes," Chris said. "And anytime there is something that has a really strange structure to it that is when I get involved… If it involves electronics, that is where she leaves me to figure that stuff out. Thank God for YouTube."

Becky also noted Chris is an avid aquarist, someone who enjoys working with aquariums, and so he helped the team immensely when it came to dealing with their dynamic addition to their cake - water. Jan McNeal, Becky's close friend, rounded off the group of three. McNeal, like Becky, had an artistic background but also had a background in mechanical engineering and was able to help both Chris and Becky when they needed it.

After the application process was finished Becky said it only took a few weeks to find out that they had been accepted. The next step was to fly in for the competition. Though the actual competition was only five hours, Becky explained that with the many photoshoots and other things they had to do, their entire competition day lasted about 17 hours.

"It was probably the most exhausting and stressful thing I have ever done," Becky said. Chris seconded. He explained watching the shows on television was not any kind of preparation for the real thing. Chris said baking in the competition is not at all like baking in your own kitchen. The ovens didn't work the same. The ingredients weren't where he thought they would be. Even finding the measuring cups was hard.

"It was chaos," Chris said. "Since I didn't have much of an artistic background I was really just there to follow instructions and help anyway I could... I think it really said something about our team where every other team had three professional bakers… What we were able to accomplish was nothing short of a miracle."

When those five hours were up and the timer called out the end of the competition, the group, who called themselves Team Whimsy, did not take home the winners trophy and $10,000 grand prize. However, they still had the time of their lives.

"When it's all said and done you're genuinely happy for whoever wins. You all feel like you've been through the ringer," Chris said. Becky explained that coming from the show she and her team have dove even deeper into the world of making dynamic cakes and she things that they can compete even better if they ever have the chance to compete again.

"We learned so much. We're ready to get on another show at some point in the future," Chris said. "Once you've done it you've kind of been there done that. You've seen how the full gig works."

"It was really rewarding to compete with the people I am close with," Becky said. "And to see that we were able to pull off something pretty spectacular."