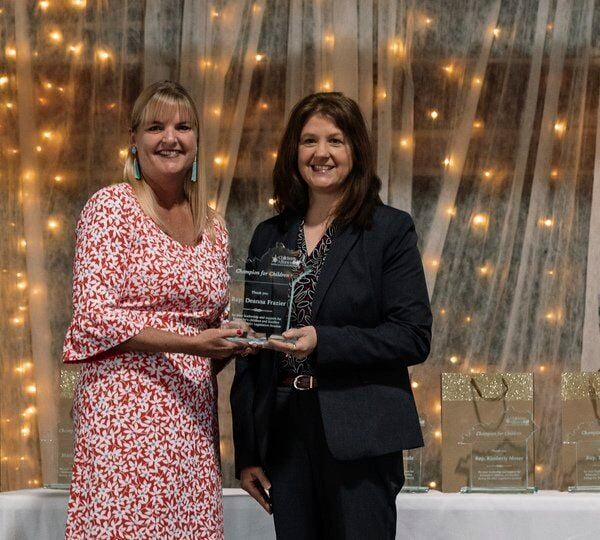 Deanna Frazier, State Representative, receives the Champion for Children Award on May 26, 2021, at the Children's Alliance annual membership meeting. 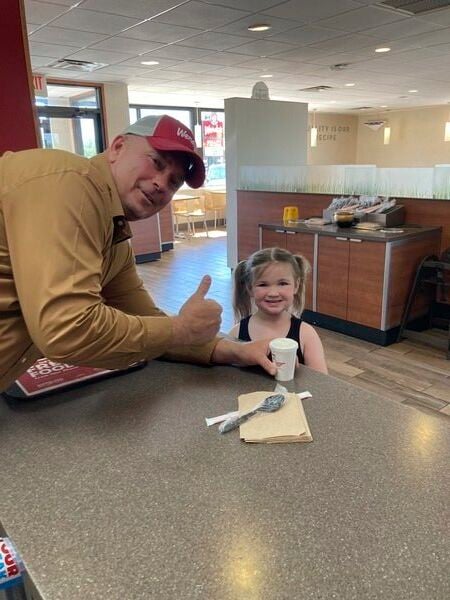 State Representative Bill Wesley volunteered at Wendy's to serve free frostys to children. For each free frosty the proceeds were donated to the Dave Thomas foundation for adoption.

Deanna Frazier, State Representative, receives the Champion for Children Award on May 26, 2021, at the Children's Alliance annual membership meeting.

State Representative Bill Wesley volunteered at Wendy's to serve free frostys to children. For each free frosty the proceeds were donated to the Dave Thomas foundation for adoption.

State representatives for Madison County have been recognized by The Children’s Alliance for their leadership and support for Kentucky's children and families during the 2021 Legislative session.

Rep. Deanna Frazier received the Champion for Children Award on May 26, 2021, at the Children’s Alliance annual membership meeting.

According to a press release, Frazier was the primary sponsor of House Bill 140, which worked to ensure the many gains made in accessing healthcare via telehealth will continue after the pandemic ends. This will include audio-only visits, which is essential due to Kentucky having many places without broadband and many citizens who are not used to live video technology. In addition, the release states the relaxation of telehealth rules has also helped address Kentucky’s healthcare access problems, noting the bill will provide continued access to healthcare for many Kentuckians, especially those with health care disparities.

Frazier told The Register she believes HB140 will allow for greater access to healthcare via the expansion of telemedicine. She said the measure would affect the period during limited in-person visits due to COVID-19 and enable people to access healthcare no matter the demographic status.

“Madison County has seen a dramatic rise, particularly in the incidence of drug abuse and addiction, and unfortunately overdose deaths,” Frazier said. “This impacts the quality of our families and ultimately the quality of our community.”

“It is an honor to present the “Champion for Children Award” to Rep. Frazier, who in her short time in Frankfort has already proven to be a strong advocate for Kentucky’s children and families. Thanks to her extraordinary efforts, the passage of HB 140 provides for an extraordinary telehealth infrastructure that will provide Kentucky citizens with access to more treatment options and help reduce health disparities,” Michelle Sanborn, president of Children’s Alliance, said in a release. “Rep. Frazier has ensured that the many healthcare gains made via telehealth services during the pandemic are maintained and improved upon going forward so that more Kentucky citizens can access the physical and mental health services they need.”

“As a health care provider, I know firsthand the impact telehealth has had on bridging the gap over the past year. However, as a parent, I can recognize how powerful a tool it will be for increasing access to quality care for children and Kentuckians of all ages,” Frazier said in a release. “It is such an incredible honor to receive the Champion for Children’s Award from the Children’s Alliance, particularly because these organizations are on the front lines of protecting our most vulnerable children.”

Frazier was not the only representative who was recognized during the Children’s Alliance annual membership meeting. Rep. Bill Wesley also received the Champion for Children Award.

Wesley was a sponsor of House Bill 448. He told The Register the bill passed, and he felt blessed to be a freshman in his first session and have a bill he sponsored passed. But, what makes it even more important is the fact he feels so strongly about what the bill entails.

Wesley said HB448 opens up a larger group of people to be a witness and give testimony on behalf of a child in a court hearing. In addition, according to the Kentucky General Cabinet, the bill expands the definition of “qualified mental health professional” as it relates to licensed clinical social workers, licensed marriage and family therapists, and credentialed professional counselors.

“In the courtroom, it is oftentimes just attorneys arguing back and forth for their clients,” Victoria Benge, executive director of Court Appointed Special Advocates (CASA) of Madison County, said. “Having other voices in the courtroom is really beneficial for the kids because only certain information gets to the courts. These kids need people speaking out on their behalf and looking out for them.”

Wesley explained this bill became a bit more personal to him when about three weeks ago, a teenager he knows came up to him and told him he wished HB448 was around when he was in foster care because he needed someone to testify on his behalf, but it wasn’t allowed.

“I love kids,” Wesley said when asked why he was a supporter of HB448. “I am a pastor and a missionary. My heart has always went out to children.”

Wesley said growing up, he struggled some, and so he can relate to children in foster care or challenging situations in a lot of ways. He also said one of his campaign promises was to be an advocate for foster children.

Wesley explained Kentucky has one of the highest rates of foster care in the nation, and he wants to be a voice for those children. However, his fight for them does not end here, either. He explained he is working on heading some new house bills. One is currently in the works, which focuses on helping foster care children.

According to the statewide foster care FACTS given by the Kentucky Cabinet for Health and Family Services division of protection and permanency, with the facts based on all children in out-of-home care (OOHC), the total number of children in OOHC with active placements in Kentucky is 9,122.

The County Data Book can be found here – https://kyyouth.org/wp-content/uploads/2020/11/2020_CountyDataBook.pdf.

Wesley told The Register Madison County is in the top ten for child abuse and neglect in the state, and Kentucky is number one in the nation. Benge explained in 2020, there were 443 children in Madison County who were abused and neglected. Those cases were all substantiated cases, which Benge said means the court has enough proof to say the abuse or neglect happened. Unfortunately, due to the pandemic, many people did not have eyes on children, so Benge noted in 2021, there has been “an insane” number of cases coming through the courts.

If you would like more information on helping children in Madison County, Court Appointed Special Advocates (CASA) of Madison and Clark Counties’ website here – https://madisoncasa.org/.