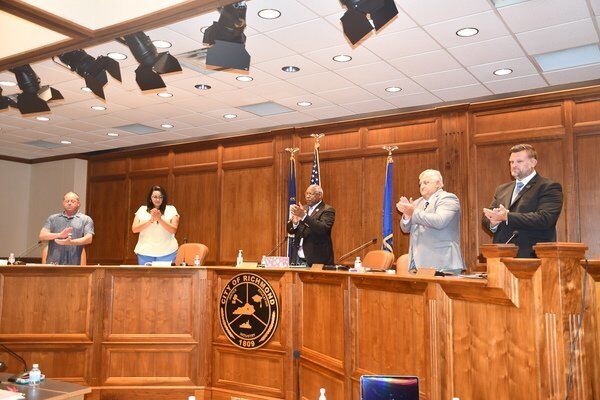 The commission stands and applauds the Boy Scout Troop 401 who presented the American Flag and recited the Pledge of Allegiance. 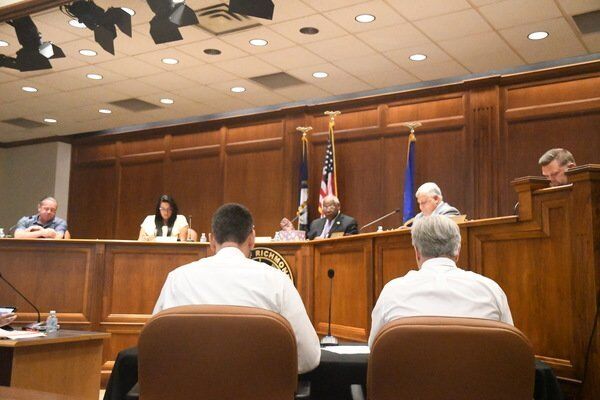 The Richmond City Commission met for the first time in-person at Council Chambers after 18 months. 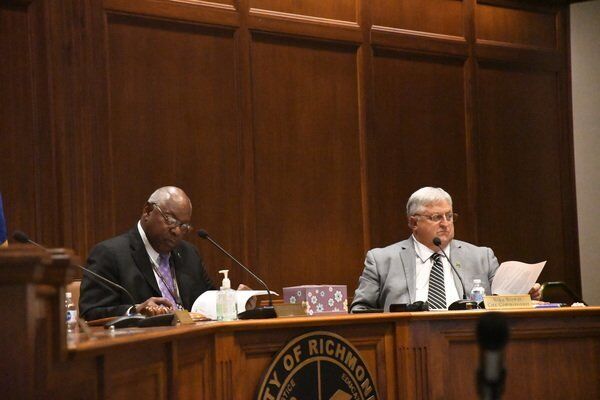 The commission stands and applauds the Boy Scout Troop 401 who presented the American Flag and recited the Pledge of Allegiance.

The Richmond City Commission met for the first time in-person at Council Chambers after 18 months.

The city of Richmond met in-person for the first time in nearly 18 months on Tuesday night.

They kicked off their meeting with a full agenda which contained appointments to boards, resignations in departments, and another zone change.

Their first matter pertained to a zone change request for a property located at the corner of Killarney and Shamrock Lane within the city limits. This proposed zone change would rezone 5.8 acres from B-3 (Highway business) to R-3 (Multi-Family Residential).

Trifecta Blue LLC filed with the Planning and Zoning Commission who conducted a public hearing on the zone change July 14 and ultimately voted to approve the change.

As this was just a first reading of the ordinance, no vote was taken on the measure, but some comments were made in favor of it.

“I know exactly where you are talking about and I am glad that it is happening,” Commissioner Mike Brewer said.

If passed, this approval would put into motion a plan by the developer whose goal is to create 82 units for multi-family residences.

“We really appreciate planning and zoning accommodating us to move forward with a grant with the Kentucky Housing Corporation,” said Preston Worley, the representative of the project.

This zone change follows several others in the city of Richmond in the past several months which will establish more residences, both single and multi-family.

Most recently the city approved changing the zoning classification of 4.3 acres on Goggins Lane and Lexington Road earlier this month.

Boone View, LLC, who is the owner of the property, filed with the Richmond Planning and Zoning Commission for an application for a zoning map amendment for a portion of 4.3 consolidated acres of the 16.88 acres located on 2209 Lexington Road, which is adjacent to 8.82 acres located on 4955 Goggins Lane.

The consolidated tract in question is currently zoned as R-1B (single-family residential), whereas the requested change of zoning is to RE (residential estate).

Even more recently, the city approved a controversial zone change and city annexation at Barnes Mill and Goggins Lane for a new development to be The Farms at Barnes Mill.

On July 13, land formerly owned by the county and zoned as agriculture, is now zoned as planned urban development in 375 acres of the tract, and 46.99 acres are zoned agriculture.

That same public meeting, the city approved a second reading for 153.77 acres at 649 Caleast Road for voluntary annexation into the city limits.

• The board went into an executive session to discuss potential litigation. After the session, the commission voted for the city attorney to send a letter to Professional Pool Management of Lexington addressing their contractual services.

• A proclamation was read aloud regarding the Madison County Sports Hall of Fame and was presented to Eugene Estelle, Glyn Green, and Tony Cox.

• The city commission heard a first reading of an ordinance which would change the city’s open records policy. This amendment would extend the time period for response for the city from three business days, to five business days.

• The city adopted an inter local agreement between Richmond and Madison County which authorized Mayor Blythe to apply for a 2021 Byrne Justice Assistance Grant Application Award. Proceeds of the award will be divided between the two entities.

• Order 21-91 gave authorization to the city’s finance director to close a separate bank account that is no longer needed, which is the alcohol license account held at Central Bank. The remaining funds will be transferred to the city’s general fund.

• James Miller was re-appointed to the city’s Planning and Zoning Commission.

• A bid was awarded for an HVAC unit for Gibson Bay Golf Course to Comfort Systems USA in the amount of $27,500. This was the one bid submitted.

• Approval was granted for the city to purchase a hydraulic excavator for the Richmond Public Works Department. The city will purchase from Boyd Company a 2021 Caterpillar 308-07 Hydraulic Excavator for a price of $123,905.

• Retirement of George Glen Newland from the city's recycling department was approved. Newland has served the city since 2005.

• An updated lease agreement between the city and EKU was approved for the use of the Crabbe Street parking lot.

• Gary Noland Sr. was appointed to serve on the city’s Codes Enforcement Board.

• An order was approved by the city declaring a 1994 firetruck as surplus and providing for its disposal.

• Darrell Little was approved as a full-time laborer for the Golf Maintenance Department.

• Max Dawson, a senior police officer, submitted his resignation from the Richmond Police Department which was approved.

• Cecile Schubert of the Richmond Ethics Board resigned from her position to pursue a move out of the state. She has served on the board since 2004.

• A bid was awarded for repairs to the city hall basement flooring to Saunders and Saunders LLC of Richmond in the amount of $15,046.87. They were the solitary bid received. The currently floor was placed in city hall in 1998 according to Chief of Police, Rodney Richardson.

• A new job description was adopted for the Codes Department to include a permit technician.

• Sondra Walker was appointed to the Parks Board.

• Pat Carter of Brookline Subdivision spoke during public comment saying her and others in the Brookline Subdivision are concerned with the volatility between residents about fireworks. Carter, who has served nearly two decades in law enforcement, said she has seen two altercations in-person and numerous attacks on social media about the problem. Chief Rodney Richardson of RPD said 7.2 hours were spent trying to investigate firework complaint calls on July 4. He said the problem was difficult to address because the ordinance is hard to comply with because it states all fireworks must be 200-ft away from any structure. Richardson said technically any person in the city of Richmond could be considered in violation, which would be hard for manpower. Other than that, Richardson said it was hard to prove who was doing what in terms of fireworks without proof — which was hard to gather. Thomas Proffitt of Brookline also spoke about firework concerns.

• Pastor Jeff Alcorn of a local food ministry said the city needs to do more with helping the homeless in Richmond. City Manager Rob Minerich said for the past three years, he felt the city was doing a lot to help the homeless community. "There are so many in the community who are out there supporting that cause,... but the city by no means is sitting on their hands about this." The commission asked him to present an outline or presentation to come before the board. Alcorn said there were great resources to help, but many did not know of the others in the community.

The next Richmond City Commission meeting is scheduled for August 10 at 6 p.m. at City Hall located at 239 West Main Street.