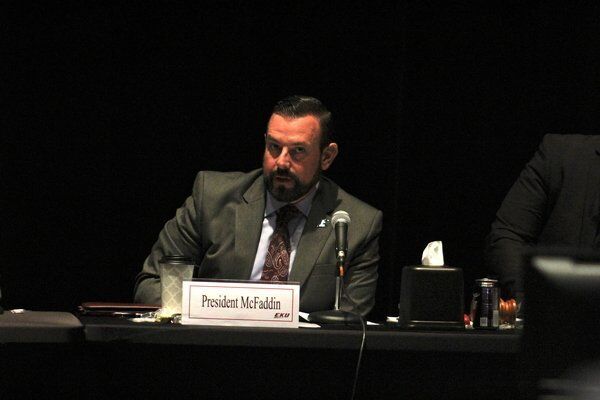 EKU President David McFaddin said he is looking forward to the university opening again at the first in-person meeting of the Board of Regents. 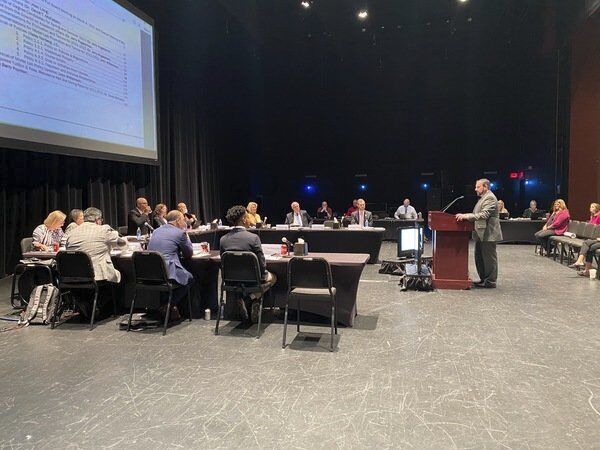 The EKU Board of Regents had their first in-person meeting since the pandemic began in 2020. 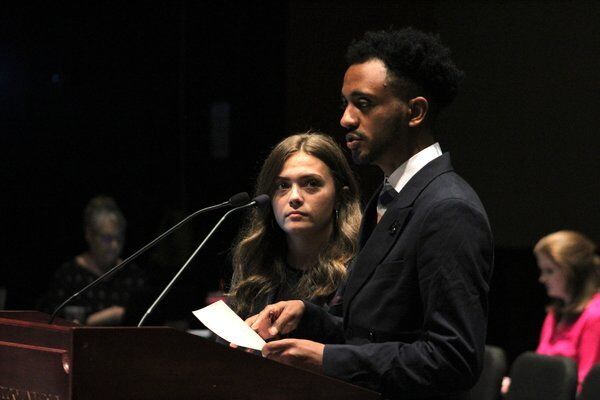 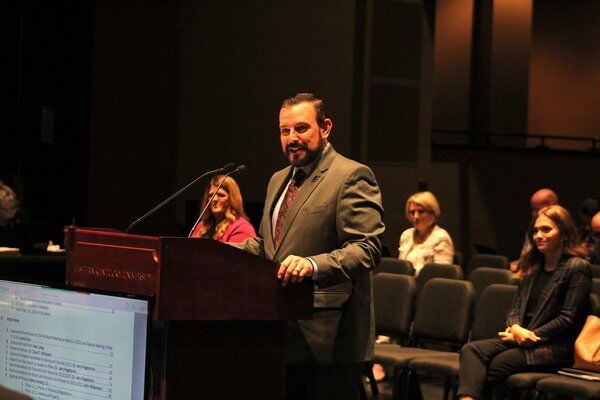 EKU President David McFaddin smiles as he gives an update to the EKU Board of Regents.

EKU President David McFaddin said he is looking forward to the university opening again at the first in-person meeting of the Board of Regents.

The EKU Board of Regents had their first in-person meeting since the pandemic began in 2020.

EKU President David McFaddin smiles as he gives an update to the EKU Board of Regents.

At the return of their first in-person meeting since the pandemic, the Eastern Kentucky University Board of Regents passed a 2% tuition increase for the 2021-22 academic year on Thursday.

In addition, the university's board voted to increase housing and dining rates for students.

President David McFaddin called the increases “responsible, but necessary” during the meeting at the EKU Center for the Arts.

According to the president, EKU has held tuition steady for three of the last four years, with no tuition increases since the 2019-20 academic year. This spring, the Council on Postsecondary Education (CPE) established a 3% undergraduate tuition ceiling for the next two fiscal years.

In an email sent to faculty, McFaddin said the 2% tuition increase will cost an extra $8 per credit hour and $93 per semester for a full-time in-state undergraduate student.

The board also approved a total increase of 2% in-housing rates and 1.2% for dining. A $125 per semester Student Health Fee, already required by many peer institutions, will be assessed beginning in the 2021-22 academic year. The Student Health Fee will support, sustain, and enhance services for both the office of Student Health Services and the Counseling Center.

An Eastern Experience Fee (formerly known as the Campus Recreation Fee) of $75 per semester was also approved and will be implemented this academic year.

McFaddin announced the 2021-22 budget includes a $1.7 million investment in recurring base salary adjustments. All full-time faculty and staff, excluding the President’s Cabinet and individuals with an employment contract, who were on the payroll as of Jan. 1, will receive a $1,000 base salary bonus beginning in July.

“The budget is an expression of our values and I want everyone here to know that it is student focused and it is focused on our core mission,” McFaddin said.

Later in the meeting, Director of Athletics Matt Roan gave an update on the athletics program.

Roan announced for the Spring 2021 semester, the athletics department recorded its 19th straight semester with an average GPA above a 3.00.

The Colonel Caravan, a gathering of fans and alumni, saw attendance increase 24.4% in Cincinnati and 84.1% in Louisville over 2019.

The baseball program had the highest revenue this season since the athletics department began charging for tickets in 2017.

With more than three months until the home football opener against Indiana State, Roan said the athletics department is closing in on the level of football ticket sales reached in 2019. Roan said they expect to exceed their goal of $100,000, which was accomplished once since 2000.

“We’re very optimistic about where our ticket sales are at,” Roan said.

Through June 15, Roan said the athletics department’s expenses account for 96% of their total budget.

According to Roan, EKU will host a ASUN Launch Event on Thursday, July 1 from 6 to 8 p.m. at the Richmond Centre. ASUN Commissioner Ted Gumbart will join EKU athletics in the celebration. In late January 2021, EKU announced after 70 years it would leave the OVC and join the ASUN Conference.

“That’s an opportunity to hear our coaches talk about this transition and move and the excitement that each one of us has,” Roan said about the event.

However, the athletics department is not the only program moving conferences this year with the club hockey team moving to the Southeastern Collegiate Hockey Conference.

Tanlee Wasson, vice president for student success, engagement, and opportunity, said that more than 2,000 students have registered for orientation for Fall 2021. Orientations have been offered in-person and virtual. Wasson said the top feeder counties in Kentucky are Madison, Fayette, Jefferson, Boone and Laurel. The top feeder states included Ohio, Illinois and Indiana.

Wasson said orientation looks a little different this year as they are conducting two orientations a day and have moved the start of orientation to Alumni Coliseum.

“That’s changed the energy… It’s just more of an exciting venue and we think we will continue to do that in the future,” Wasson said.

Gaining more student engagement and bringing back the “Eastern Experience” has been a mission for Wasson and her team.

Loni Yost, director of student life and first year experience, Roan and Wasson previewed “The Exceptional Eastern Experience,” or E3, anchor schedule for the upcoming academic year. Two events are scheduled per semester as large-scale events. These events are in addition to the traditional events already in place.

Yost said in addition to BigE Welcome in August, EKU will host a Powell Palooza with live music and a DJ. In October, there will be a Halloween bash, ghost tour, haunted house, movies in the Ravine, Hoopfest, football game with bonfire and zips & zombies. Finally, a signature concert will be held in October in coordination with the EKU Center for the Arts. In February, a comedy show will be the main event along with an amateur comedian competition and basketball competition, including a dunk and 3-point contest. To round out the spring semester, EKU is planning to put together an outdoor interaction event, music festival, food trucks and beer garden.

As part of the E3 programming, Roan laid out campus-wide events, centered around home athletic events, that are aimed to attract more student and fan engagement.

Leading up to home games, Roan is excited for bonfires and pep rallies. He also previewed post-game events, such as beer gardens and festivals at Powell Plaza. Roan hopes that by incentivizing students participation will lead to higher attendance rates. Some incentives include scholarships and competition prizes. Roan also believes having fan buses for away games will attract more students to cheer on the Colonels in the upcoming athletic seasons.

Student Government Association President Eyouel Mekonnen gave his final update to the regents and stated the spring SGA election had one of the highest voting participation than previous years.

The board recognized Mekonnen for his service and dedication to the board and to the university.

Newly elected SGA president Jenna Grace Smith was sworn in to the board as the student regent.

McFaddin gave the regents an update on the three on-going dean searches on Thursday.

The College of Letters, Arts, and Social Sciences continues to search for a new dean as Sara Zeigler transitions to the position of provost. CLASS has named John Bowes, chair of history, philosophy and religious studies, as the interim dean. Michael Chen, of psychology, will serve as associate dean.

Current provost, Jerry Pogatshnik, is set to retire in two weeks, allowing Zeigler to take over July 1. Pogatshnik was honored by the board with a resolution thanking him for his dedication and work over his time at EKU.

According to McFaddin, the College of Business had about 50 applicants for the dean position. The semi-finalists will visit campus this summer with the hopes of having a dean hired by the start of the fall semester.

The College of Justice and Safety has begun the recruitment process for a new dean. McFaddin said the plan is to have a dean ready to take over as early as Jan. 1, 2022.

Lisa Simpson, 1986 graduate, was recognized by the board for helping thousands of certified public accountants and their small business clients during the COVID-19 pandemic by providing resources and training related to relief programs established by the United States Congress in 2020 and 2021.

“EKU has served as a foundation for my career and I’m just so glad that 30 plus years ago I made the decision to come to Eastern,” Simpson said.

Regent Nancy Collins is at the end of her second term as a regent. Collins received recognition by the board after serving EKU for 12 years. Collins will remain on the board until Governor Andy Beshear appoints her replacement.

“It’s truly been an honor to serve,” Collins said. “We’ve been through a lot together and I do serve at the Governor’s pleasure so I don’t know when I’ll be able to see you again.”

Newly-elected staff regent Jeremiah Duerson was sworn in during the meeting and will begin his term on July 1.

• The board formally confirmed and conferred the degrees for the candidates who have completed degree requirements for Spring 2021 and Summer 2021.

• A university certificate in Banking and Financial Services was approved by the board. This certificate is designed to provide a key understanding of the foundational concepts of personal finance, banking, investments, financial planning, valuation and analysis.

• Two programs were approved to be suspended. The masters in personnel services in higher education and the bachelors of science in geographic information systems program were suspended due to low enrollment numbers.

• The board approved to reinstate the bachelors of science in family and consumer sciences (teaching) program.

• All policies except for the policy on policies and regulations were posted for 14 days for public comment.

• The regents adopted an annual operating budget for fiscal year 2021-22. The total operating budget passed was $379,541,560. A revenue budget of $144,037,554 was set for tuition and class fees. A bond resolution of $25,430,000 was approved by the board. These funds will be used to renovate residence halls. “As we think about the next normal, I don't expect us to just go back to who we were and what we did in 2019. If we’re not improving, if we’re not getting better, then we’re not moving forward,” McFaddin said.

• Bethany Miller, senior director, institutional effectiveness & research, proposed a “One Stop Shop” plan that would be a single location for students to get help with anything from registration, holds, records, financial aid, billing or any other assistance they may need. Miller asked the board for $50,000 to set up a location in Whitlock and lower Powell. Streamlined services and cross trained staff will help address a variety of student needs at the two locations. An enhanced website and kiosks will allow for intuitive self-service and online chats for students to get the assistance they need. The proposal was passed by the board.

• Tim Ross, chair and professor of applied engineering and technology, and Ethan Witt, assistant vice president, government & community relations, were appointed by the board to represent the university on the Madison County Airport Board.

McFaddin and the regents expressed their excitement for the upcoming academic year and returning to full capacity on campus.

“It is going to be the most exciting year on Eastern Kentucky University’s campus since First Street was opened,” McFaddin said with a smile.

The next scheduled board of regents meeting will take place on Sept. 23.