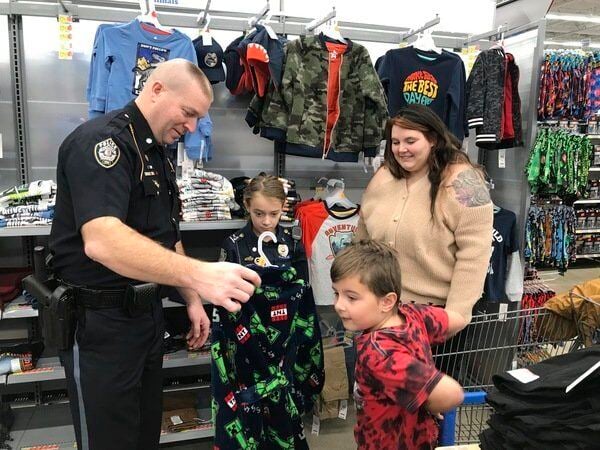 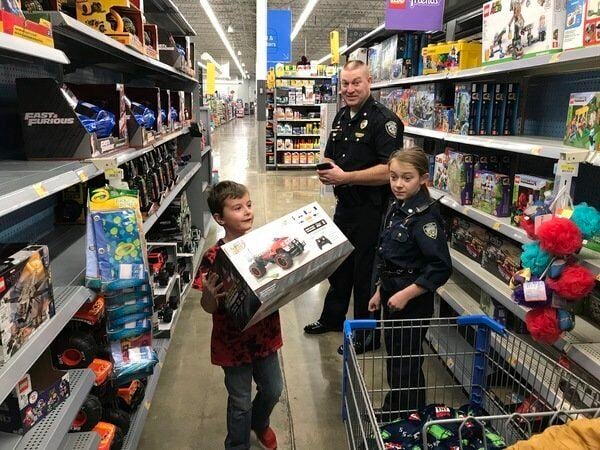 Colton Minton picks out a toy at the Berea Wal-Mart with the help of RPD Assistant Police Chief William O'Donnell and his daughter Laney.

Colton Minton picks out a toy at the Berea Wal-Mart with the help of RPD Assistant Police Chief William O'Donnell and his daughter Laney.

"This is epic," exclaimed Colton Minton, as the young Richmond native filled a shopping cart with several toys.

A Monster Jam play set sat in the cart alongside a Nerf gun, and several pieces of clothing the excited little boy had picked out. The apparel featured images from some of his favorite video games like "Minecraft" and "Pokemon." Among the pile of clothing was a pair of warm gloves, which Colton said he was particularly excited about.

"He's been asking for gloves. He wants to make a lot of snow angels this winter," Mary Jeffers, Colton's mother, explained.

Minton's excitement was just a fraction of the delight shared on Saturday during Madison County's Fraternal Order of Police (FOP) Shop with a Cop event.

Shop with a Cop is the top priority of the year for the FOP, organizers said.

Shop with a Cop was held in three locations in 2021, with visits to the Richmond Kroger, the Richmond Meijer, and the Berea Wal Mart.

The department identifies families in need -- which could include families struggling with financial issues to those suffering from death or illness -- and take them on a shopping spree. They are allotted $100 dollars for each child in the family, who are then paired up with an officer from one of the participating law enforcement organizations. The officer then assists the kids in picking out clothes and toys for Christmas.

"We help those who are less fortunate to kind of ease the burden of Christmas. That's what it's all about. There's not like a set criteria to get in. They fill out applications in the school through the family resource center. It's just to help the families and these kids and it's amazing," FOP President Bryen Tucker said.

"This is super fun. The little helper is so cute. It's been fun. Colton needed this," Jeffers said of her son.

The "little helper" Jeffers was referring to is is Laney O'Donnell, the nine-year-old daughter of RPD Assistant Police Chief William O'Donnell.

Dressed in a police uniform alongside her dad, she has accompanied the assistant chief on Shop with a Cop sessions for the last few years. Laney O'Donnell said she offers a perspective that can be very helpful for the kids that are shopping.

"I do know more about what the people and the kids both want because I have a little brother. He's obsessed with this stuff," she explained.

The younger O'Donnell said she has been thinking about going into law enforcement like her dad. While he is hesitant about that, Assistant Chief O'Donnell enjoys having his daughter come along with him on what is one of his favorite events of the year.

"Well, it's been pretty rewarding. I've participated in this a majority of the 19 years I've been with the police department. It's really fun to meet kids like Colton and interact with them and let them know that we do more than chase bad guys and arrest people," O'Donnell said. "We're here to help and try to grow a partnership with them. Hopefully young people like these will join us in the Richmond Police Department one day. There are several events we do at the police department, but this is right up there at the top as one of my favorites."

Shop with a Cop is an emotional day for the families that participate, and it is just as emotional for the officers paired with the families.

"You know we're not really supposed to show emotion, but you get the officers in here and they all melt like teddy bears," FOP President Tucker said.

Shop with a Cop is funded entirely by donations from the community.

Tucker said planning the event can get complicated.

"This is the most headache-driven Christmas spirit you can have," Tucker said with a laugh.

"I was typing up the list of all the families on Thursday and ended up with A-Fib in the E.R. It's one of those things where you don't wanna miss a kid, you wanna make sure you get everything right. It's crazy. We'll get calls (about signing up for Shop with a Cop) all the way up to the end. This year we put out a newsletter telling everyone when and where it would be," Tucker said.

Tucker said the FOP made some changes this year to the program.

Instead of having all of the families line up at the store at once and wait to get paired up with an officer, the line has been staggered - with families shopping in 30 minute intervals.

Apart from being an opportunity to help out for the holidays, Tucker said Shop with a Cop also gives law enforcement officers a chance to show a different side of themselves to the community.

"Some of these kids may never have a positive interaction with law enforcement. 'You're the cop that took my mom or dad away' because they got arrested," Tucker said. "Here we're trying to show them that we are not the bad guys. I hate it when parents tell their kids 'If you don't stop acting up he's gonna take you to jail' when they see us out in uniform. Don't say that. We're here to help. When things go sideways, look for us, because we're not the bad guys. This shows that."