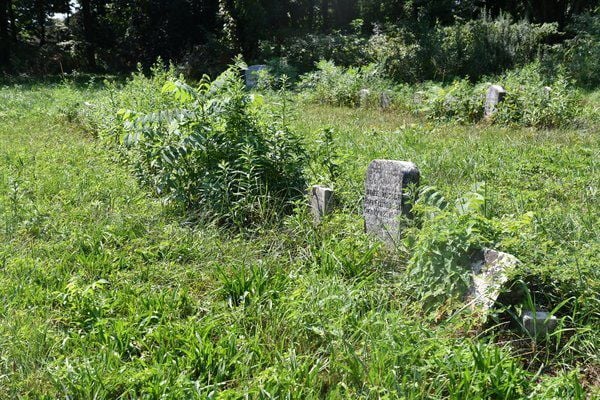 Several tombstones at the Blue Grass Memorial Cemetery which is overgrown and has no known owner. 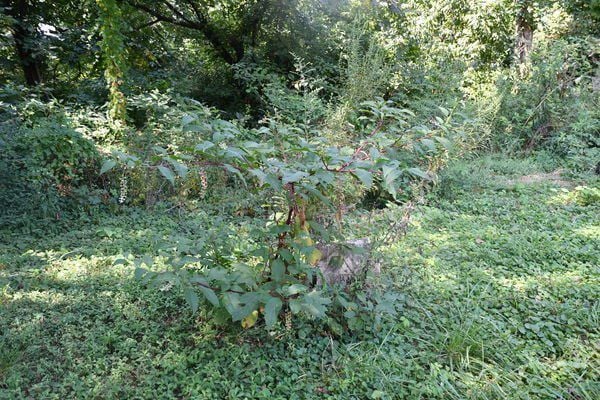 An inconspicuous gravestone, covered in weeds. 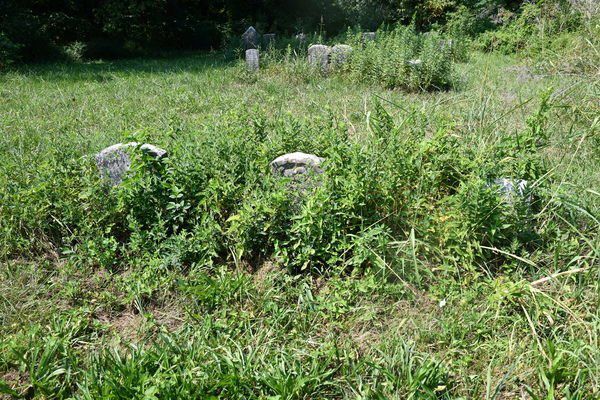 Three headstones completely overgrown with weeds at the burial grounds across from the Blue Grass Army Depot. 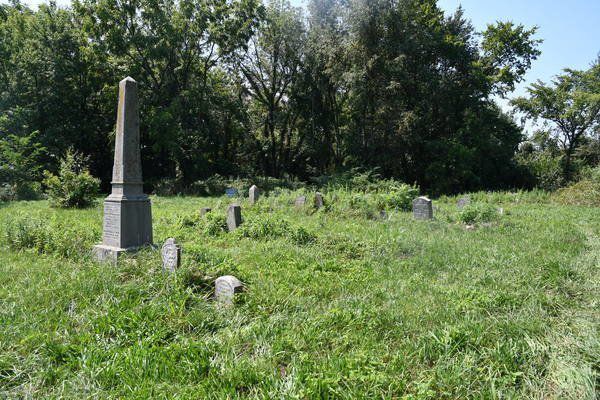 The view of what is recognizable at the Blue Grass Memorial Cemetery, which has no marker to identify its existence.

Several tombstones at the Blue Grass Memorial Cemetery which is overgrown and has no known owner.

An inconspicuous gravestone, covered in weeds.

Three headstones completely overgrown with weeds at the burial grounds across from the Blue Grass Army Depot.

The view of what is recognizable at the Blue Grass Memorial Cemetery, which has no marker to identify its existence.

If anyone were to look at the seemingly abandoned cemetery located across from the Blue Grass Army Depot, one would think that no one cared about the property, much less that the grave site has a name and extensive history.

Upon locating the inconspicuous cemetery, there are two American flags posted on a rundown stone entryway leading to an overgrown field full of tall grass, weeds and broken, sunken and dilapidated headstones.

But several people do care, including Stewart Davidson and the members of the Friends of Blue Grass Memorial Cemetery, who believe it is county residents’ “civic duty” to help restore and maintain the grave sites at not only that site, but also at Speedwell Cemetery, both of which were formerly located in what is now the Blue Grass Army Depot.

“This appalling lack of respect for the dead is beyond disgraceful,” their mission statement reads. “These individuals deserve social justice that only we, the living, can provide. Their stories and struggles should never be forgotten. Nor should their final resting places be abandoned and lost back to nature and the ravages of time.”

Overgrown and in disrepair, the burial grounds at the Blue Grass Memorial Cemetery and Speedwell Cemetery are home to more than 1,600 deceased Madison Countians. Some of the names known from them are Oldham, Taylor, Collins, Todd, Hensley, Gilbert and Jarman.

But now, after much neglect and confusion on who owns each property, Davidson and the group are taking matters into their own hands, joining together to “correct the failure to respect the deceased pioneers, founders and leaders of Madison County” which are buried at both sites.

“This is a community thing to really lift off and get attention and do something for those that can’t help themselves because they are gone,” he said.

Those that have been laid to rest at the two sites were relocated there in 1942 after the U.S. government purchased 15,000 acres of land needed to build facilities that would store chemical and conventional weapons.

In the purchase agreement, the government was responsible for exhuming all the remains and relocating them, and to add tombstones or makers to the individual properties for this purpose.

With the farmlands having been in families for generations, many of them had family cemeteries that also had deceased slaves buried on the properties. But because of segregation, two tracts of land were purchased in order to separate African Americans from Caucasians.

The first was “Cemetery A,” later Blue Grass Memorial Cemetery, which contained 901 Caucasian graves and was relocated to its current home on 421 Battlefield Highway.

The other is “Cemetery B” located on Speedwell Road — coining the name Speedwell Cemetery. Here, there are 769 graves of African Americans.

In terms of maintenance, the government entrusted the property deed and a large amount of cash to a group of local lawyers and attorneys which were responsible for the upkeep of Blue Grass Memorial Cemetery. If a trustee was to leave the board or pass away, another was to be appointed in their absence.

The trustees, however, did not comply with the agreed terms and duties, and after they board had all passed on, the cemetery was overtaken by wilderness.

According to Davidson, the five-acre land plot is not owned by anyone and neither is the seven and a half acres at Speedwell Cemetery, which suffered a similar fate to the Blue Grass Memorial.

Speedwell also had trustees appointed to oversee the maintenance of the grave site, but because of lack of funding, the outcome was random and unpredictable. Mowing is now only done sporadically.

Expenses to maintain the site on Speedwell Road are being paid by relatives of the original trustees and some local donations. The deed was never found, meaning that it is not owned by anyone and all promised government funding ceased in 1973.

One of the biggest problems for the groups is that the ownership of either site remains unknown, making the cemetery unable to be purchased or transferred to acquire legal ownership.

Which is why one of the group’s biggest goals is to determine who holds legal ownership to “assure continued perpetual care and maintenance for future generations.”

“I am just appalled at what is going on with these cemeteries,” Davidson said. “There are permanent citizens of Madison County buried there and little kids in school won’t know, people looking for their roots won’t be able to find them, because of the state of these cemeteries.”

He explained that there was no inventory list for the Speedwell Cemetery meaning that they didn’t know who all was buried at the grounds.

“We can’t honor these people because we don’t know who they are,” Davidson said.

He said the site sees some attention here and there with some groups who help weed eat and mow the site, but with broken headstones and graves consumed by the land, the Friends of Blue Grass Memorial Cemetery is looking for more help.

Davidson said that Bryan Marshall, along with members of the First Baptist Church on Eastern Bypass, will hold a community workday weed eating and mowing on Sept. 7, beginning around 8:30 a.m. at the site across from the depot entrance.

He hopes that on this day, he could invite out Richmond Mayor Robert Blythe, as well as Berea Mayor Bruce Fraley, along with representatives of the county historical society, and members of another restorative cemetery, the Friends of Maple Grove.

To get involved or donate to the Friends of Blue Grass Memorial Cemetery, contact 859-302-1571.