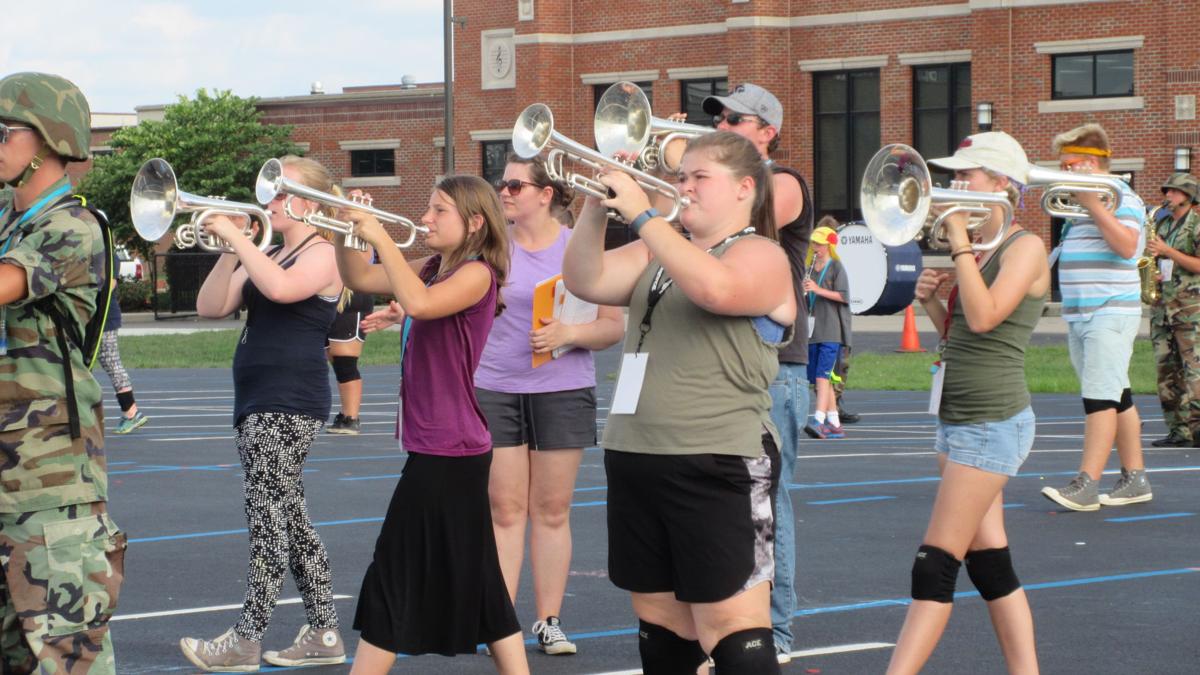 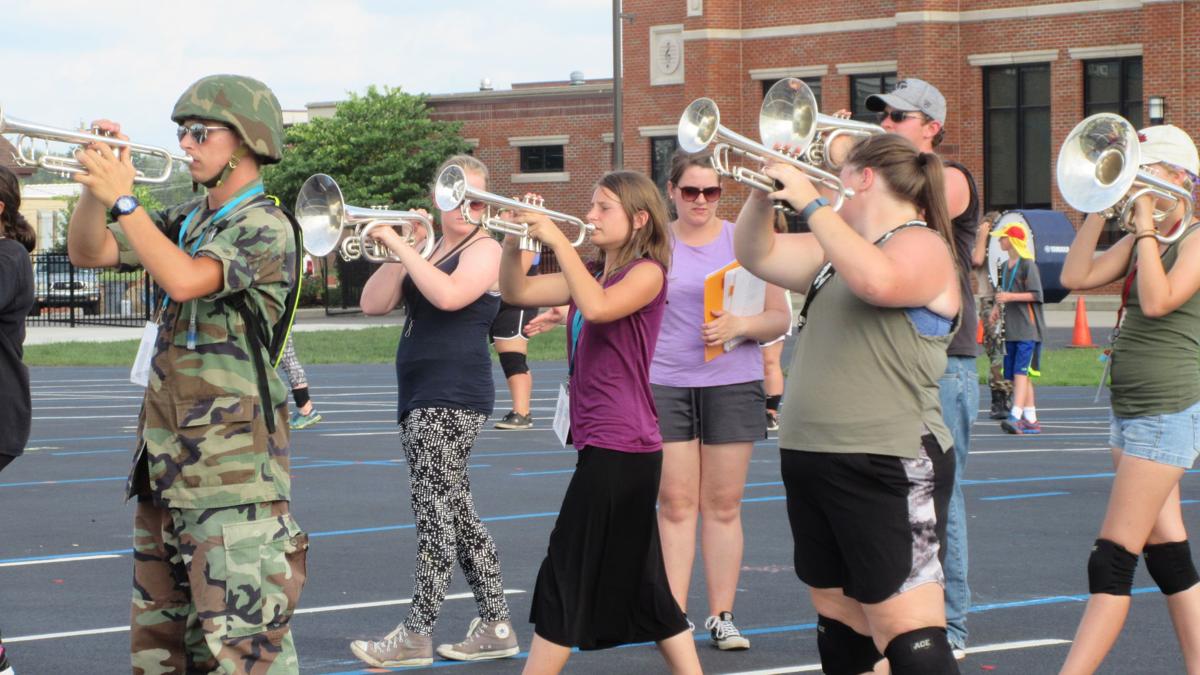 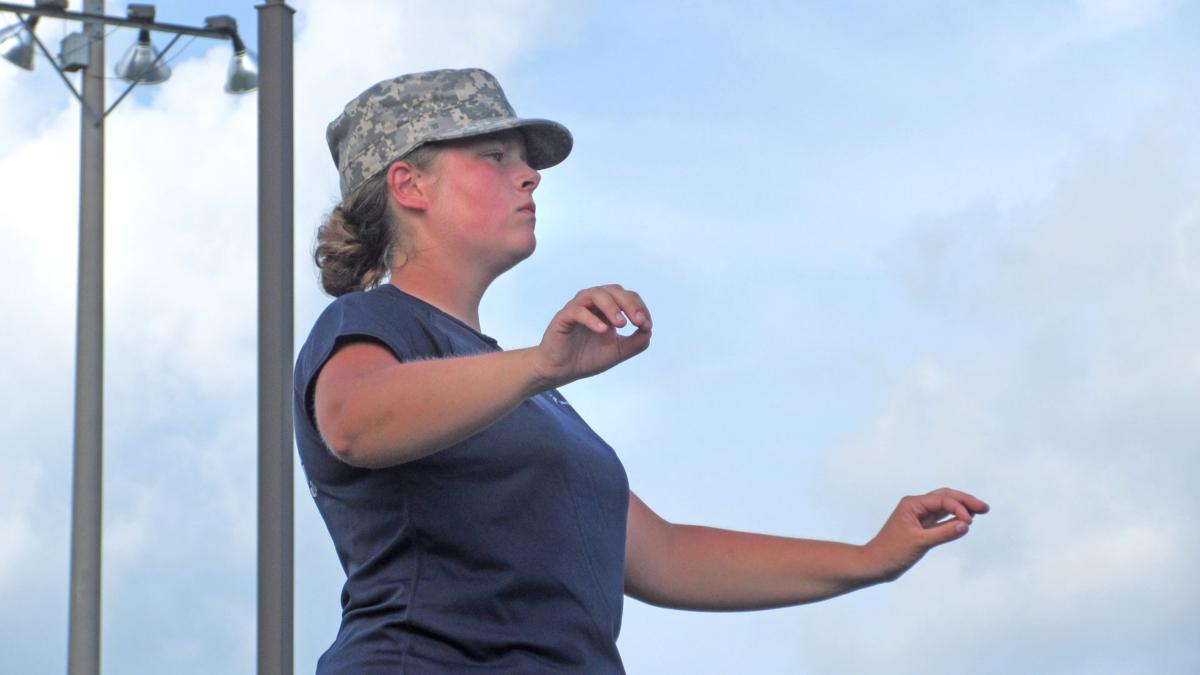 Field commander Mandy Abrams stands at attention ready to conduct her the MSHS band during practice.

Field commander Mandy Abrams stands at attention ready to conduct her the MSHS band during practice.

Even through it’s the last full week of summer break, several Madison Southern High School students are standing outside in formation with instruments in hand learning as much as they can at band camp.

The MSHS marching band began practice two weeks ago, and according to band director David Ratliff, the 2016-2017 school year is predicted to be a good one.

“We have 76 (marching band) members,” said Ratliff. “That is the largest in school history.”

When Ratliff began work at MSHS 11 years ago, there were only 30 band members. But now, along with pep band, symphonic band, jazz band, and percussion ensemble, there are well over 100.

There is no audition to join, according to Ratliff, and the band welcomes all newcomers. This year the band will gain 25 new members.

“(This year’s) kids are very hard working and very pleasant,” said Ratliff. “I’ve not had any issues whatsoever out of them, even though we are putting together a challenging show. There hasn’t been a hint of complaint or fussing.”

Starting the weekend after Labor Day, Ratliff said the band would begin competing every weekend through Halloween. The competitions are each hosted at surrounding high schools. MSHS will host a regular season show competition on Sept. 17. They will also host the Kentucky Music Educators Association quarterfinals for the eighth consecutive year on Oct. 22, according to Ratliff.

Of course, the eye is on the prize, which for marching bands is the state competition to be held at the University of Louisville this year.

Field commander Mandy Abrams says she is especially excited for this year’s competition run because she feels this could be MSHS’s big year.

“I anticipate there is a strong chance we could actually make it to state this year,” said Abrams. “That would be the first time in two decades that our band has made it to state. I feel like if we can keep up this momentum and get all this new next level work right, we can make it.”

And the band is preparing.

According to Ratliff, the band is set to rehearse Mondays, Tuesdays, Thursdays and Fridays during the coming school year. During this week’s band camp, rehearsals have run from noon until 9 p.m.

To get the kids pumped for the school year to begin, Ratliff says he tries to choose music they will enjoy and he will enjoy since he will listen to it all fall.

“They can write to our strengths as opposed to taking a song that might not fit my group,” explained Ratliff. “This way if we have a strong section, we can highlight it. And both (Gevedon) and (Sokolowski) are good friends that understand the game and are really skilled musical composers.”

Despite all the hard work, Ratliff said band is a family. And each year, Ratliff is intrigued to see what students fill the family’s roles.

“Its interesting to see who is the first kid in and the last one out, who helps take care of percussion, and who helps make sure the office is straight,” said Ratliff. “And just when you think (you) have a kid that you don’t think could ever be replaceable, sure enough, another kid steps up and takes their place and responsibilities (after they graduate). It is fun to watch them grow.”

Another important part of the band family is band parents.

“They are the hardest working people I know,” said Ratliff. “It is a thankless job. I try to thank them but I don’t’ think I ever can. There is no way we could do what we do without them and our Booster group.”

This year, Ratliff said the band plans to begin fundraising for new uniforms, which will cost approximately $30,000 to $40,000.

For more information on the MSHS band, visit MadisonSouthernBand.org or find the band on Facebook and Twitter.