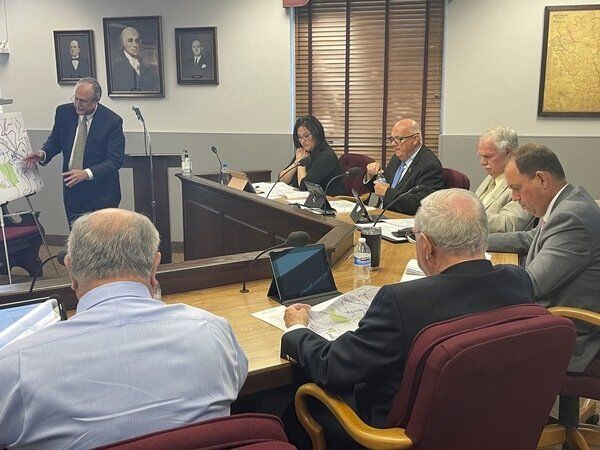 The Fiscal Court magistrates and judge/executive approved a zone change at Moberly Road. 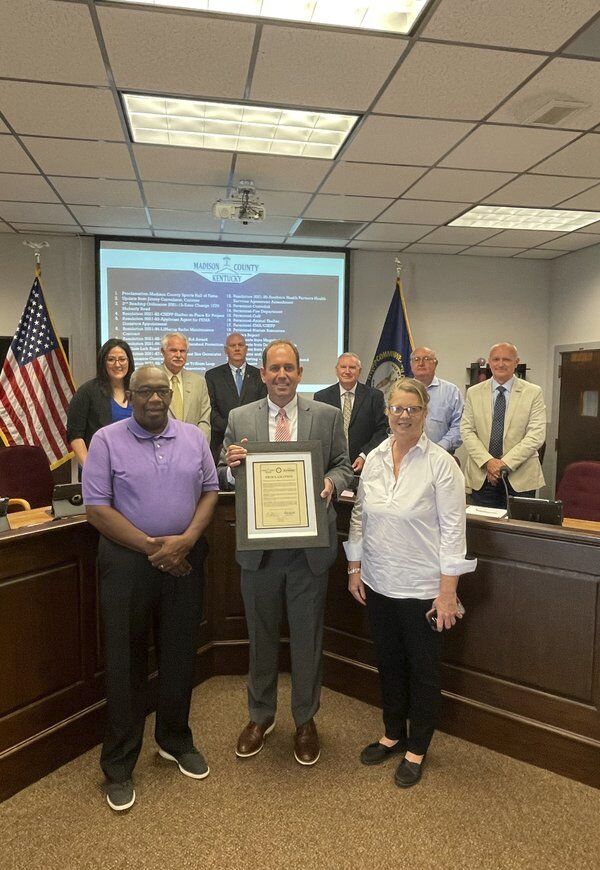 The Fiscal Court magistrates and judge/executive approved a zone change at Moberly Road.

A zone change which was formerly denied on Moberly Road in 2019, was approved Tuesday morning in a narrow vote by the Madison County Fiscal Court.

After nearly an hour of discussion, the 80 acres of land located at the 1270 Moberly Road owned by Jack VanWinkle was approved to be rezoned from R7 (agricultural) to R1 (single-family residential) in the hopes of building a new subdivision.

This same parcel of land was denied just two years ago in an overwhelming vote with four members against, and one in favor. At that time, the majority of magistrates were against the project because of watershed, runoff and traffic concerns.

History almost repeated itself, but narrowly escaped being denied a second time.

Representatives of the development and the applicant spoke about how this land had changed since it was denied two-years-ago. They said because of other newer developments in the same area as the parcel in question, this land was perfect for this project.

Attorney Jerry Gilbert said another property adjacent to this one had been approved in the past year for the same type of zone change they were requesting approval for on Tuesday. In addition, other commercial businesses had been built in the same area, which encouraged more development.

“There is no doubt there is growth in that area,” Gilbert said. “Infrastructure is not only available, but on the property itself. If it is not going to be developed, there is no reason to have this…,” Gilbert said.

Most importantly he said, the pandemic revealed more than ever the need for new, single-family residential homes in Madison County.

Following their final presentation, members of the public made comments.

A resident of Moberly Road, Donnie Gentry, said he was for the project, and figured the area would be developed when he and his wife decided to move in.

“I see nothing but improvement in the development, it is going to help me and benefit the area,” Gentry said of proposed detention ponds included in the project outline. “I have no objection to it.”

Deanna Tyler, a lifelong county resident, realtor, and President of the Homebuilders Association said approving this development would be a great financial move for the county.

If 100 homes were built in the development, the county could earn nearly $28.7 million in local income, from builders, finishers, framers and plumbers.

“That is a huge thing for local and small businesses,” she said.

On the opposite side of the coin, Bobby Jones, another resident of Moberly Road, said he was speaking on behalf of 200 homeowners in the area who were “overwhelmingly against” the zone change.

“Even if the project is passed today, I have concerns with the oversight of the project,” Jones said. “It has gone through planning and zoning unanimously every time and it gets no scrutiny until it gets to (the fiscal court). While we defeated it four-to-one last time, and a two-to-two vote on the other property, when it leaves here you don’t have any oversight. Where do we get our oversight on these proposed proposals?”

Barger and Tudor, who have voted against the project both times, repeated their, and citizens’ concerns about traffic and water.

Barger agreed, and said he was not only concerned about the water, but the traffic and reminded everyone this project had been defeated for the same reasons two years ago.

Despite their arguments, the measure passed three-to-two. From here, a site development plan will be created and overseen by the Madison County Planning and Zoning Commission.

• The Madison County Fiscal Court read aloud a proclamation supporting and recognizing the Madison County Sports Hall of Fame which honors those recognized in the county who have displayed excellent athletic contributions and achievements.

• A bid was approved for CSEPP Shelter-in-Place Kit project to go to Pioneer Vocational Services.

• Resolution 2021-84 was approved for a contract with L3 Harris Radio System.

• A Boring Operation Bid was approved for underground communication systems.

• Hepburn Consultants Inc. were approved for a contract with the county for CSEPP Broadcast Site Generator Maintenance.

• Magistrates and Judge Taylor approved the adoption of Trillium Loop into the county roadways for maintenance.

• Pictometry Agreements were approved for Madison County, Richmond, Berea, EKU and Berea College with all stakeholders for their use of images of every sector of Madison County.

• An amendment was approved between Southern Health Partners Health Services Agreement to reduce the daily inmate count from 375 to 300 inmates. If the number exceeds 300, the county will be charged $1.42 extra a day. Jailer Steve Tussey said this was to help save money while there were fewer numbers of inmates in the jail due to ongoing construction.

• Donna Officer was approved for hire to the county Custodial Department for a position of full-time custodian II.

• Kaitlyn Banks was approved from office assistant I to office administrator II.

• Cole Baker was approved from EOC technician to operations lead.

• Morgan Elliston was promoted within the Human Resource Department.

• As a part of the “Dog Days of Summer,” the Madison County Animal Shelter will host on Saturday an open house from 11 a.m. to 3 p.m. and offer reduced adoption fees for all cats and dogs to $25.