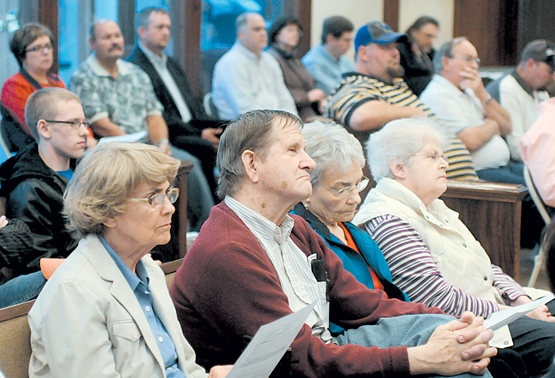 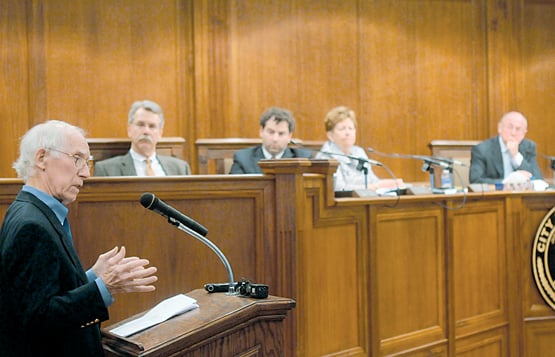 Zone change opponent Sanford Jones speaks Tuesday evening to the Richmond City Commission on behalf of the Barnes Mill Neighborhood Association. Pictured at back are, from left, Richmond City Attorney Garrett Fowles, Commissioners Jason Morgan and Donna Baird and Mayor Jim Barnes. Opponents and proponents were each allowed 30 minutes to address the commission during a public comment period.

Zone change opponent Sanford Jones speaks Tuesday evening to the Richmond City Commission on behalf of the Barnes Mill Neighborhood Association. Pictured at back are, from left, Richmond City Attorney Garrett Fowles, Commissioners Jason Morgan and Donna Baird and Mayor Jim Barnes. Opponents and proponents were each allowed 30 minutes to address the commission during a public comment period.

After the meeting, developer Ed Worley said he believed the unanimous vote reflected the effort he and partner Brent Rice had made to get input from residents of the neighborhood and incorporated their recommendations into their plans.

The zone change was made contingent upon land-use restrictions the developers had proposed, and would remain in effect as long as the new zoning existed, Worley’s attorney Michael Eaves said.

The action was not a simple rezoning to R-3 which would allow the building of apartments, Eaves said. It would allow only the plan presented by the developers.

Opponents of the zone change, led by Ken Bellamy, head of the Barnes Mills Neighborhood Association, said the opponents would decide within 30 days whether they would file suit in circuit court seeking to overturn the zone change.

Bellamy did not address the commission, but his written submission was entered into the record.

Before he left City Hall, Bellamy shook hands with Worley and said, “It’s not personal.”

Worley expressed appreciation for Bellamy’s attitude and told other opponents who live nearby that the developers would do their best to be good neighbors.

Attorney Will Messer spoke for the opponents, several of whom also spoke.

He argued the proposal met none of the three requirements for a zone change:

• The development was consistent with the city’s comprehensive plan

• The existing zoning was inappropriate.

The comprehensive plan, adopted in January 2011, was hardly obsolete, he said, and it identifies areas a mile or more from downtown as most suitable for multi-family residential development.

The plan also calls for gradual transitions from high-density zones, such as R-3, to low-density areas zoned R-1, Messer said. The rezoned property would abut an R-1a zone, he pointed out, and the area “surrounding the property is single-family.”

The developers had presented no evidence the existing zoning was inappropriate or that major changes had taken place in the areas, the opponents’ attorney said.

The desire of an owner not to rebuild a structure after it was damaged by fire, as was the case with John Lackey’s home, was not enough to justify a zone change, Messer said.

“If the (comprehensive) plan is to have any meaning, this zone change should be denied,” Messer said.

Eaves told the commission the property was not surrounded by R-1a zoning. It is bounded on the north by a 600-vehicle Eastern Kentucky University parking lot, and the university’s multi-story buildings sit across Lancaster Avenue from it to the east. A gas station/convenience store is to the south at the corner of Barnes Mill and Lancaster.

The development would concentrate students within walking distance of campus, Eaves said, creating less need for them to use their vehicles.

The planning commission that drafted the comprehensive plan favored the zone change in a 4-2 vote, Eaves pointed out, and the commissioners then voted 6-0 to accept the findings of fact submitted by the developers.

“Did the planning commission get it wrong?” Eaves asked. “If not, the zone change should be approved.”

Another developer would never come to the city with a plan and volunteer to make the improvement Worley and Rice were offering, their attorney asserted.

The plan includes construction of a pedestrian bridge across Lancaster Avenue that had been suggested by residents of the area, Eaves said. Fences had been redesigned and the location and orientation of buildings in the complex had been altered to conform with neighbors’ requests, he said.

Dr. Sanford Jones, a retired EKU professor, was the first of four neighborhood residents to speak against the zone change. No one except Eaves spoke in favor.

“You are asking a lot of people to give up a lot for a few people,” Jones said.

Residents were being asked to accept increased traffic flow, congestion and accidents, he asserted.

The change would be a “significant leap” that would alter the character of the area, Jones said. Previous zone changes farther up Lancaster Avenue had allowed apartments to be built where “stately homes” once sat, Jones said. The zone change at the corner would prompt other developers to eye more changes in the remaining R-1a areas along Barnes Mill.

Instead of revitalizing older R-1a neighborhoods, developers would use a zone change at Lancaster and Barnes Mill to argue for additional zone changes, he said.

With 75 percent of EKU’s students qualifying for financial aid, most could not afford to live in the proposed development, Jones said, and upper income students already have several choices for upscale housing.

“Is this really needed?” Gary Short asked the commission.

The university was not growing rapidly, he said, adding that the developers seemed to be following a “Field of Dreams” strategy, “If we build it, they will come.”

His wife, Sherry Short, said was concerned about the additional traffic the development would bring and the threat it would pose to the remaining R-1a zone. Rather than deteriorating, the neighborhood was attracting young families, she said, and her street is home to 17 children.

Most seats in the City Hall auditorium were filled, but the chamber was not filled to overflowing as it was for the March 1 planning and zoning commission hearing.

While the meeting remained largely civil, it was marked by a couple of outbursts. As Eaves attempted to adjust a projector with a remote control before he spoke, a man called out from the audience, “Is this going to be another dog-and-pony show?” Eaves replied, “It might.”

Eaves and other proponents spoke for more than two hours at the planning-and-zoning hearing before opponents got their chance.

Bill Robinson can be reached at brobinson@richmondregister.com or at 624-6690.