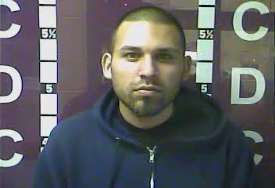 Two felony sex offenders were sentenced Thursday in Madison Circuit Court, including one man who received a 25-year sentence for kidnapping, raping and stabbing his ex-girlfriend.

Madison Circuit Judge Jean C. Logue sentenced Geraldo Ortiz Jr., 29, to 25 years in prison. Because he was convicted of violent crimes, he must serve 85 percent of his sentence before he is parole eligible.

Ortiz pleaded guilty June 21 as part of a plea bargain in two cases against him. The first was a charge of first-degree criminal abuse related to hitting his 10-month-old daughter in 2011.

Ortiz said during his change-of-plea hearing that he went to his ex-girlfriend’s Estill County residence in December 2011 with a deadly weapon, forced her into a vehicle and “had sex with her.” He then drove her around and struck her in the face, Ortiz said.

Ortiz had waited for his ex-girlfriend to leave her house for work at 4 a.m., according to preliminary hearing testimony from Kentucky State Police Detective Roger Short. Ortiz grabbed her from behind, cut her with a knife and forced her into his truck, Short said.

Ortiz drove her to a wooded area near Indian Fort Berea and raped her, according to Short. He drove her back to his Berea apartment, and once he fell asleep, the woman called 911, Short testified.

Smith recommended a sentence of 20 years each on the rape and kidnapping charges, and 10 years for the assault, all to be served concurrently. She said the five years recommended from the abuse case should be added on to the 20-year sentence, for a total of 25 years in prison.

Logue said Ortiz will have to register as a sex offender once he is released from prison, and he must undergo sex-offender treatment while incarcerated. Ortiz also will be subject to a five-year conditional release period under sex-offender statutes.

Man sentenced to five years after

Paul Michael Sword, 45, was sentenced Thursday to five years in prison after he pleaded guilty to being sexually involved with a preteen girl.

“He knows what he’s done. He knows what he did was wrong,” Wes Browne said. He pointed out that Sword’s sex offender evaluation said he was “low-risk” to re-offend.

Assistant Commonwealth’s Attorney Jennifer Smith said even if Sword were eligible for probation, she would argue against it.

“He was a man in his 40s who looked at an 11-year-old as a partner,” Smith said. “... she was victimized in a manner that will affect her the rest of her life,

Logue followed the Commonwealth’s recommendation of a five-year sentence. Sword will have to serve 85 percent of the time before he is eligible for parole, and because his sexual offenses are considered violent by Madison judges, he will not be eligible for shock probation.