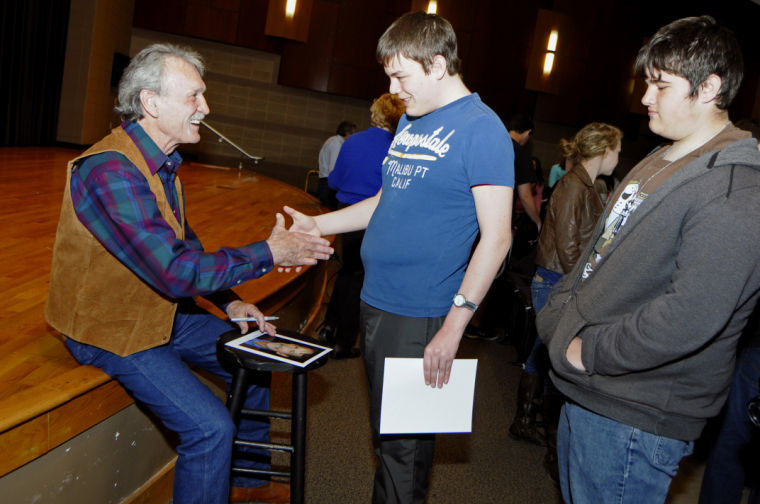 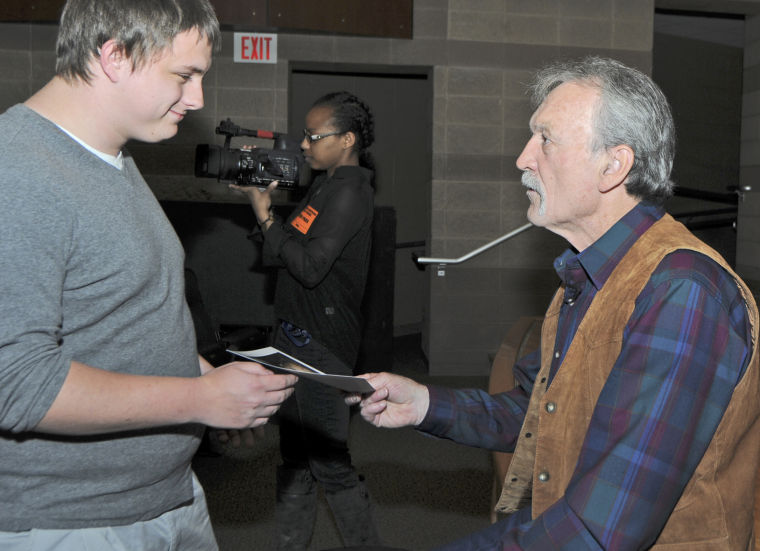 “I killed about eight or nine kids, about your age,” actor Muse Watson joked as a room full of high schoolers erupted in laughter Wednesday at Madison Southern High School.

A 1971 Berea College alumnus, Watson was referring to his role as the revenge-seeking murderer in the late 1990s slasher film “I Know What You Did Last Summer,” and its sequel that followed a year later.

“I’ve made a living killing people,” he added with a mischievous grin. “Now I’m too old to know what you did last summer.”

Drama and theater students from Southern, Berea Community High School and Lynn Camp High School in Knox County gathered in the school’s auditorium to learn about Watson’s journey from Berea to Hollywood and what it takes to succeed in acting.

Watson is most recently known for his portrayal of special agent Mike Franks on the CBS show "NCIS" and for this role as Charles Westmoreland on the Fox television series "Prison Break."

Watson also starred as a special guest on FX’s “Justified,” a drama series set in Kentucky. That episode aired March 11.

In addition to these roles, Watson has a diverse collection of credits on his resume, having appeared in 44 feature-length films, numerous television shows and theater performances. He has shared scenes with actors such as Julia Roberts, Jon Voight, Sylvester Stallone, Richard Gere, Jennifer Love Hewitt, Sara Michelle Gellar and Harvey Kietel (a complete list of his work is at musewatson.com).

But he acted for the first time while a student at Berea College, portraying Petruchio in Shakespeare’s “Taming of the Shrew.” Along with roles in the college’s Summer Arena Theater, Watson also was a part of the 1972 revival of the Wilderness Road Outdoor Drama at Indian Fort Theater in Berea.

“It’s a tough business,” Muse told the students about acting. “If you have any doubt in your mind; don’t do it.”

But, it’s good to be nervous, he added. “Take that nervousness and use it; it makes a person interesting to watch.”

Watson said he knows actors who claim they’re not nervous. “But they’re not good either.”

Developing their own techniques to easily evoke any type of emotion is important, he told the students, encouraging them to practice often in front of a mirror.

These techniques, “combined with emotion that comes from the gut,” are the foundations of becoming a successful actor, he said.

During the presentation, students watched a compilation of Watson’s acting roles and a clip from his guest appearance on Saturday Night Live alongside his “I Know What You Did Last Summer” co-star Jennifer Love Hewitt.

Although Watson’s character tried to kill Hewitt in the movie, the two made amends on SNL with their own rendition of the Elton John and Kiki Dee duet “Don’t Go Breaking My Heart.”

Watson stuck around after the presentation to chat, shake hands and sign autographs for the students.

Wednesday’s visit to Southern was the last stop in Watson’s weeklong stay in Berea. Throughout the week, a student film crew from Berea College led by media relations/video manager Jay Buckner, recorded his appearances for a promotional video highlighting the distinguished alumnus.

On Friday, Watson spoke to Shan Ayers’ theater class at the college’s Jekyll Theatre and was the keynote speaker Saturday at the Family Empowerment Conference sponsored by the college’s Partners for Education.

He also was the featured guest at Saturday’s Madison County Alumni Event hosted by Berea College President Lyle Roelofs and his wife Lauren in their home. More than 170 people attended, said Kristin Dalessio of alumni relations.

On Sunday, he signed copies of the book “Stars in Her Eyes,” for which he wrote the foreword. A book about “navigating the maze of childhood autism,” Watson was asked to write the book’s foreword after a speech he gave about being the parent of a special needs child. He donated the proceeds from the sale to Berea College.

Watson will return Friday, April 25, for the annual SaraCare celebration in Berea. Since her passing in 2005, friends and family of Sara Elizabeth Kennedy have honored the 17-year-old’s memory through the annual celebration. More than $100,000 has been raised at the event over the years to support families of children who are struggling through illnesses.

Dinner with Watson at the Historic Boone Tavern Hotel and Restaurant will be one of the event’s raffle items this year.