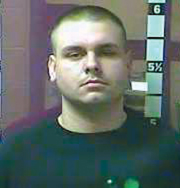 Attorneys for a couple sentenced to five years in prison are seeking shock probation for their clients.

Madison Circuit Judge William Clouse said he would take the possibility of shock probation for Stewart M. and Jennifer A. Shuman under advisement, but did not speak favorably of the couple’s prospects at their June sentencing.

Attorneys Timothy Despotes and Sarah Zuercher are defending Stewart and Jennifer, respectively. Both are 23 years old and former residents of Mt. Rushmore Drive where they admitted to keeping their children locked in a room covered in feces inside the home.

“She was on bond for six months and did really well,” Zuercher said Thursday during the hearing.

Shock probation may be granted only for non-violent, felony offenders with no prior criminal offenses, according to Kentucky law.

During the couple’s June sentencing, Clouse reminded the couple that “Even a snake takes care of its own.”

The two were each sentenced on two charges of second-degree criminal abuse, a Class D felony. Five years is the maximum allowable sentence under state law.

The couple was arrested Sept. 8 after Richmond police officers found their two sons locked in a bedroom, according to their report. The room was “covered from floor to ceiling with feces from both children” and door had been tied closed with a bungee cord, the arresting officer wrote.

Jennifer Shuman reportedly told police the children had been kept in the room for about a week because she and her husband could not control them. The children also had numerous bruises, and the younger child had bite marks on his arms, the police report stated.

At a May court hearing, the Shumans both admitted they had placed the children in an “unsafe and potentially harmful” environment.

During that same hearing, Despotes asked Clouse if probation for Stewart would be possible because of his client’s “clean criminal history.”

“These two boys were kept bungee-corded in a room with nothing but a Styrofoam chair and a television,” she said. “The one boy was biting the other boy while his parents sat in the living room. The parents have got to be held accountable.”

A date for Clouse’s ruling for or against shock probation was not finalized during Thursday’s proceedings.

The two remain lodged in the Madison County Detention Center.

Couple accused of locking up children set to appear in court