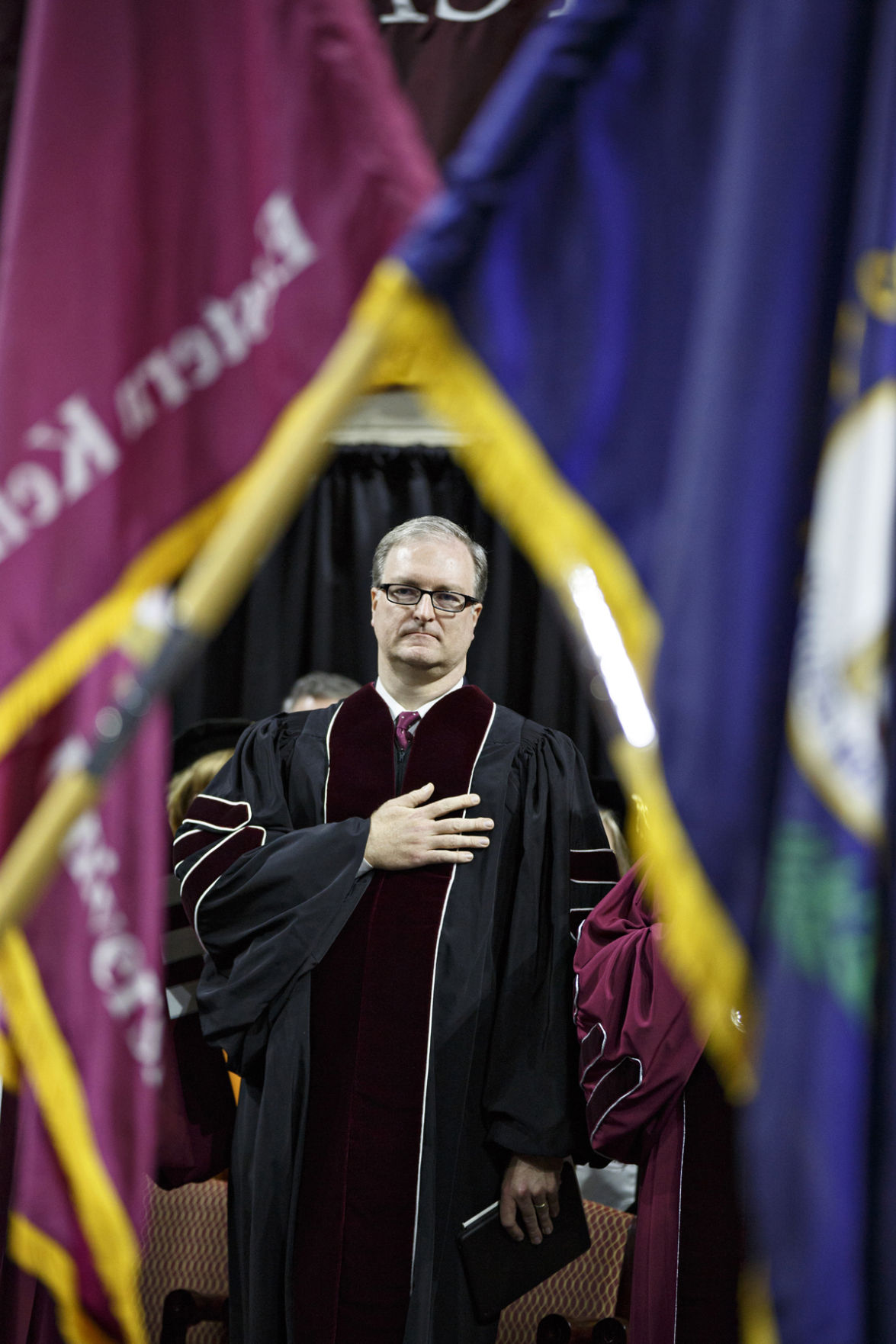 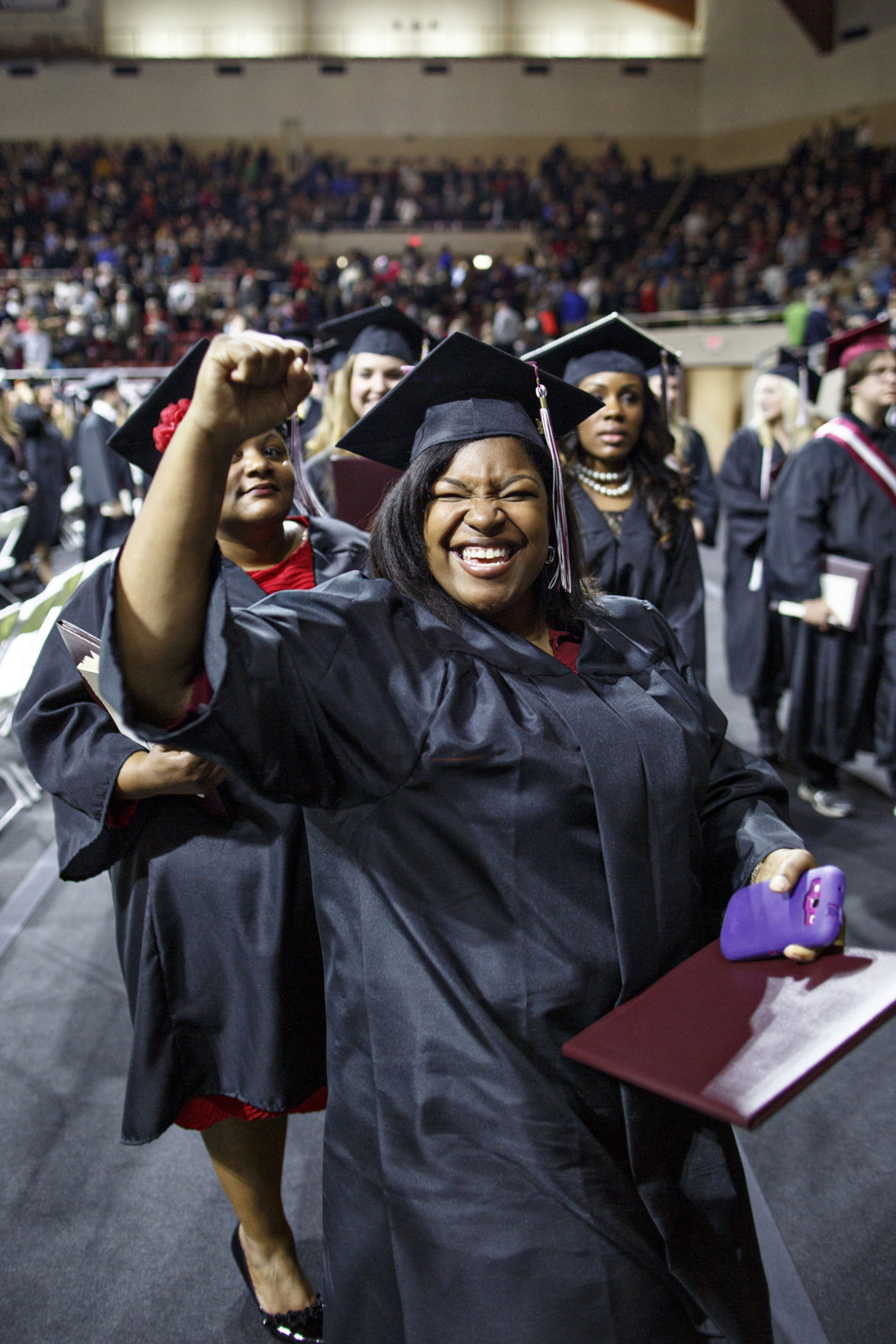 A graduate expresses her excitement about receiving her diploma Saturday at Eastern Kentucky University. 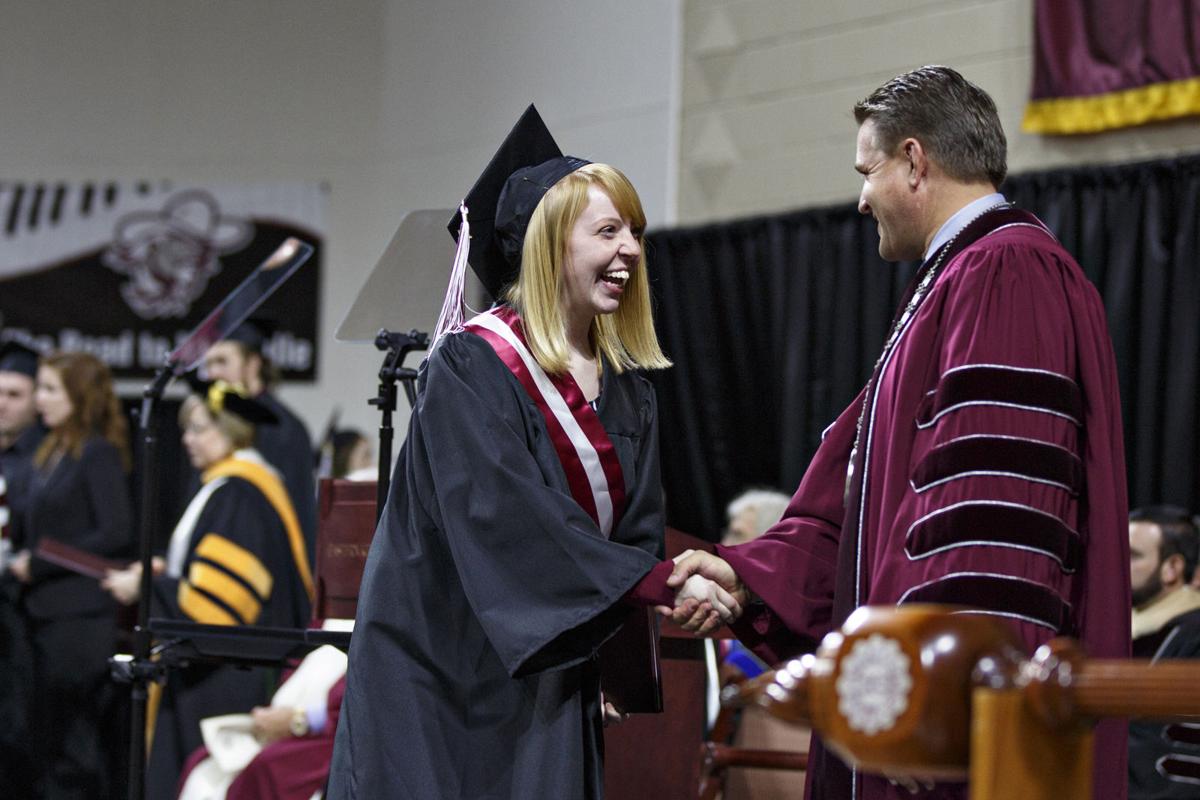 A graduate expresses her excitement about receiving her diploma Saturday at Eastern Kentucky University.

Grayson, who received an honorary doctor of laws degree, addressed the morning ceremony, which honored degree candidates in the College of Arts and Sciences and the College of Health Sciences.

Carloftis, who received an honorary doctor of humanities degree, spoke at the afternoon ceremony, which recognized degree candidates in the College of Business and Technology, the College of Education, and the College of Justice & Safety.

Grayson, former two-term Kentucky Secretary of State and now president and CEO of the Northern Kentucky Chamber of Commerce, employed a “Star Wars” theme, offering three pieces of advice with examples drawn from the film series.

“To thrive in the future,” Grayson said, “you need to invest in yourself by becoming a lifelong learner. As Yoda told Luke, ‘Difficult to see, always in motion is the future.’”

His second piece of advice was to take calculated risks, recalling how Luke and the Rebel Alliance decided to attack the Death Star.

“It is important to be bold and to take risks,” he said. “But by making sure that you are only taking calculated risks, you are much more likely to succeed or survive any failure.”

Lastly, Grayson urged the graduates to make their own destiny. “Luke decided to make his own destiny. He so believed in the good in his father that he puts his father in the position of either watching his own son die at the hands of Palpatine or putting his own life in jeopardy by killing Palpatine to save his own son. And we know what option he chose.”

Carloftis, a nationally acclaimed garden designer who grew up on the banks of Kentucky’s Rockcastle River, gave the graduates a list of seven principles by which to live their lives: work hard, never stop learning, open your minds and hearts to people, treat everyone the same, surround yourself with successful people, give of yourself to charity and always leave a place better than you found it.

Known as “Gardener to the Stars,” Carloftis said he wished he could bottle the enthusiasm he saw among the graduates. “Grade school is one thing, high school is another, but this is the real deal,” he said. “Get ready to make your own place in the world that is you.”

Carloftis’ talents will soon be on display at EKU. He is designing a garden for the former location of the Martin Hall Tennis Courts on Lancaster Avenue – one of many projects underway to enhance the curb appeal of the Richmond campus.

Speaking as representatives of their graduating classes in the morning and afternoon ceremonies, respectively, were Erica Childress, Independence, who graduated with a master’s degree in public administration, and Dr. Doris Crawford, a native of Clarksdale, Miss., who received a doctoral degree in educational leadership and policy studies.

Both ceremonies can be viewed in their entirety at video.eku.edu/commencement.