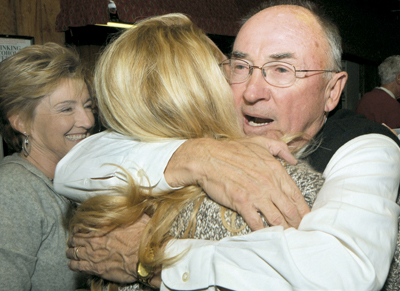 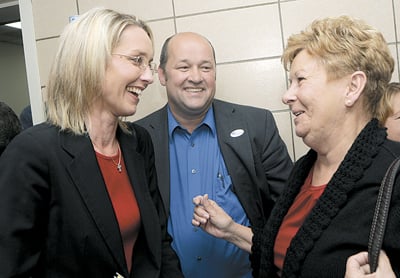 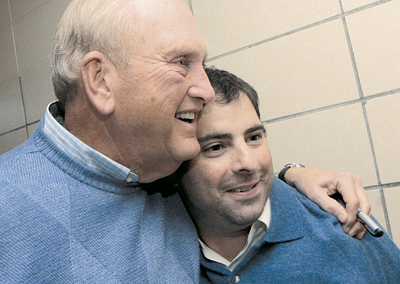 Jason Morgan, right, is congratulated Tuesday night by Ralph Hacker, after being elected to the Richmond City Commission.

Jason Morgan, right, is congratulated Tuesday night by Ralph Hacker, after being elected to the Richmond City Commission.

Richmond has elected a new mayor and three new city commissioners, according to Tuesday’s election results.

“It’s wonderful,” Barnes said. “All during my campaign, everybody kept saying they wanted a change. I think they meant it. I’m excited and I hope they are, too.”

Barnes will be working with a city commission full of new faces except for one incumbent, Robert Blythe.

“We have a lot of work ahead of us,” he said. “We’re going to start as soon as we can to make sure than we’re all on the same page and see what we need to be doing for this community.”

Barnes and the new commission will officially take office Jan. 1, but Barnes said he is not going to wait that long to start working.

“I feel great,” Baird said. “I feel like I’ve really accomplished something and I’ve worked hard to get there.”

Baird said she has not set an agenda when entering into her first term as city commissioner.

“The only thing I care about is helping the people of Richmond,” she said. “I can’t thank them enough. It’s a very humbling experience and I’ve very happy and fortunate. I haven’t really sat down and planned anything out. I’m going to wait until I get there. I just want to do whatever’s necessary for me to do.”

“I’m incredibly grateful for the support,” Morgan said. “I wouldn’t be running if we didn’t have a financial issue. We’re going to balance the budget. It’s going to be difficult, but it can be done. It does not make sense when you look at it. It’s incomparable. You don’t know what you have. It’s impossible to read. We’re going to have to correct our budget layout.”

Blythe, the lone incumbent, will fill the third seat for the city commission, receiving 2,616 total votes.

“I have to say thanks to the people who voted for me, who indicate by that that they still have a reasonable amount of confidence in me to do what I’m elected to do,” Blythe said. “They didn’t have to do that and I appreciate that. The people have spoken in another way — the fact that there are three new faces. I can work with anyone and I look forward to working with them. I would want to know at this point what direction the people would want us to go.”

Being voted back into office is a very humbling experience, he said.

“Folks didn’t have to vote at all, so I appreciate being asked to serve again and I will serve to the best of my ability,” Blythe said.

The final spot on the commission will be held by Richard Thomas, a former CEO at Pattie A. Clay Regional Medical Center, who received 2,520 total votes.

“I’ve been trying for this for quite a while and I want to thank everyone,” Thomas said. “I have a lot to learn in a short time and I’m going to start tomorrow. I look forward to working with the commissioners and the new mayor. I think we’ll work together well and get some things done. I’m very humbled that I have this opportunity.”

Ronica Shannon can be reached at rshannon@richmondregister.com or 624-6608.