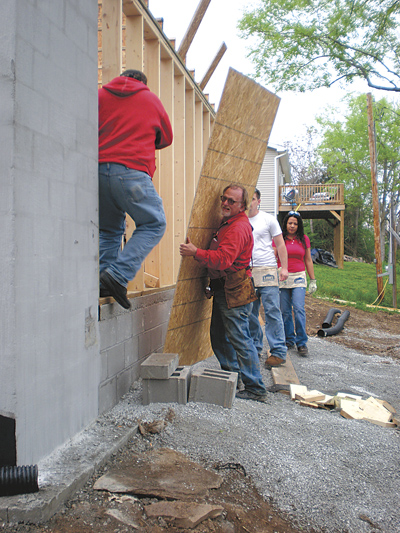 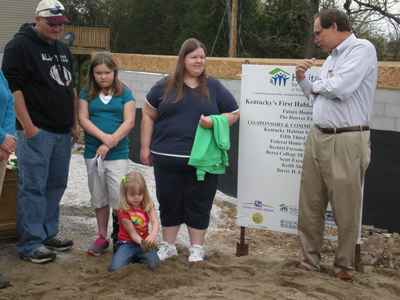 Berea Mayor Steve Connelly speaks Satuday during Saturday's wall-raising ceremony by Habitat for Humanity. Connelly stands next to the Hoover family, J.T. and Marlena Hoover and daughters Jaidyn (playing in sand) and Madison, who will receive the home.

Berea Mayor Steve Connelly speaks Satuday during Saturday's wall-raising ceremony by Habitat for Humanity. Connelly stands next to the Hoover family, J.T. and Marlena Hoover and daughters Jaidyn (playing in sand) and Madison, who will receive the home.

Tears pooled in Marlena Hoover’s eyes Saturday as she talked about becoming a first-time homeowner.

However, her two daughters, Madison and Jaidyn, were much more concerned with the color of their future bedroom walls.

The family, including John “J.T.” Hoover, will be receiving Habitat for Humanity’s first “Passive” home built in Kentucky. This means the home will be more energy efficient, exceeding both federal Energy Star and state building code requirements.

The home, which is being built entirely with renewable materials, includes “super-insulation,” an air-tight shell, three-paned windows and a heat-exchange ventilation system to achieve reductions of 70 to 80 percent in energy use.

Prior to going to the home’s site, 404 Brown Street, Habitat volunteers met at the Appalachian Gallery on Saturday morning to learn more about passive housing from Ginger Watkins, a certified passive-house consultant for Kentucky Habitat for Humanity.

More than 25,000 residences and other buildings have been built to passive house standards in Germany and other European countries.

Students from Berea College, Eastern Kentucky University, the University of Kentucky and local technical colleges were among the group of building volunteers.

Berea Mayor Steve Connelly was given the honor of driving in a ceremonial nail to begin Saturday’s work.

The passive house and “green” dormitories being constructed on Berea College’s campus are just two examples of what is being done on the local level to reduce energy costs and become more environmentally friendly, Connelly said.

The Hoover family learned last summer they had been chosen to receive Habitat’s first passive home.

Based on heating and cooling bills from passive homes elsewhere in this country and Europe, those bills should be dropping to an average of $62 a month, according to Judy Flavell, executive director of Habitat for Humanity of Madison and Clark Counties.

The Hoovers’ current home has only air-conditioning units during the summer months and gas heat in the winter. This method keeps only a couple of rooms comfortable, Marlena Hoover said.

The home also has severe mold and mildew problems, she said.

To be eligible for a Habitat home, a family must put in 350 hours of “sweat equity” work, which the Hoovers already have begun, Flavell said.

Building a passive home costs about $20,000 more than a traditional Habitat for Humanity home, she said. That amount is recovered in 10 years if a family saves $2,000 annually in energy costs.

The cost of the Hoovers’ homes is being met in part by grants and financial support from several local entities, including the state, Berea College and local energy/environment sustainability organizations.

Ronica Shannon can be reached at rshannon@richmondregister.com or 624-6608.