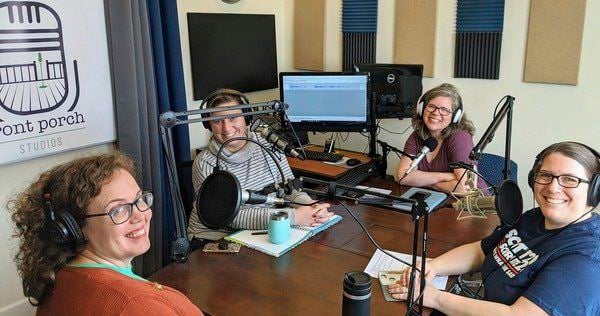 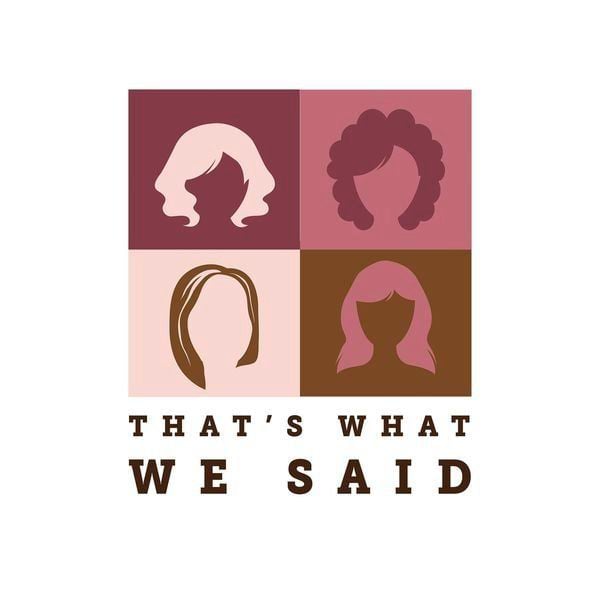 It all started as a joke.

The four friends chronicled the ups and downs of their daily lives in a small town in Kentucky, shared book recommendations, funny stories and aired their grievances about local and national politics.

It was personal, honest and -- more than anything -- hilarious.

"We would talk about the most ridiculous things," Smith said with a laugh.

Then one day, a question formed: "What would happen if we made this public?"

"Jenny, her daughter, Elly Green (who wrote the music for the podcast), and I were coming back from the Women's March in Washington, D.C., in 2016, and we were listening to something on NPR and got the giggles. We started joking about doing a podcast. We were thinking that, at some point, maybe we should really do one," Parrish said.

That off-hand joke soon became a serious discussion among the friends.

There was just one problem.

"I don't know how to actually do this," Smith explained.

Enter Troy Price of Front Porch Studios in Berea and the producer of "That's What She Said: The Podcast."

"He helped us immensely. He's enthusiastic about podcasts in general and helped us set it up. We use the equipment in his studio and upload all of our stuff from there. He is great with all that technical stuff," Smith explained. "We couldn't do it without him."

Smith, as one of the most technical-savvy of the group, was in charge of editing -- something she admits was a challenge at first; removing every errant tsk and umm of the recorded conversations.

"We are all sort of goofy. I like that we leave in those pieces that are us. Just real conversations that we have. It doesn't sound super polished." Parrish said.

"We are not aiming for polished," she added with a laugh. "If we are, someone needs to tell me."

Now, 17 episodes in and bona-fide podcasters, the women have tackled several topics: discussions on the joys of being moms of boys, political activism, various odd jobs they had when they were younger, local black history with special guest Sharyn Mitchell, the art scene in Berea with Jessica Holly (who also did the logo for the podcast) and, of course, the COVID-19 pandemic.

The response to the group's funny-but-sometimes-serious approach has resonated with their audience.

"I've been surprised (at) how many folks listen. We get recognized sometimes, and it's pretty funny. People will see one of us or when we used to go out together, they would say, 'Hey, it's the podcast ladies.' It's happened like twice. Sometimes, we will be out and another person will reference something in an episode that I forgot I said," Basham explained.

Hobson was also taken aback when she realized her coworkers were listening to the podcast during a Zoom meeting for her work.

"I was talking about something that happened, and one of my coworkers said, 'Jenny, is that a #relish?' Which is something we reference in the podcast a lot. I didn't know my work people were listening to us," Hobson said with a laugh.

While it's unusual to have coworkers and complete strangers in on a personal joke, Basham said one of the original goals of the podcast was to share what life is really like in a small town in Appalachia and stories that could bring a community together.

Too often, Basham said, the realities of living in a small southern town are painted over with stereotypes, and the women wanted a place where they could talk about serious real issues with a dose of humor, while also shedding light on factions of society that are under-represented.

"I know that we are four middle-aged white women (who) are privileged. We can't ignore that fact, but we do try to have other voices and views on here … We want people to realize that we are all navigating a world with all sorts of changes. It's OK to be vulnerable. Everyone is navigating some sort of challenge, and no one has it all together. (What we hope to focus on is) how can we support each other and try the best we can. Sometimes, it's hilarious and it fails miserably, but sometimes we get a glimpse of the moment we have it all together," Basham said.

Parrish said she hopes the podcast shows that people are more connected than they think when you start to peel back the layers.

"My biggest focus is to help folks understand that there is not a right way or a wrong way to be a woman right now, not a right way to be a parent. It's OK to be honest about the fun times and also the difficult times. Life isn't perfect, and that's OK, and we don't have to pretend that it's perfect," she explained.

According to Smith, the podcast averages about 180 downloads a week and "Just the facts, Ma'am" is the most popular episode, so far.

"That's on the high side for most podcasts," Smith explained. "'Duck and Cover' where we were talking about Gen X is the second-most popular."

It's also the episode that was interrupted by Madison County's emergency sirens test.

The ladies rolled with it.

It's something they have also had to do a lot lately as the four friends have adjusted to working from home and, now, podcasting from home away from each other.

"I think we have made the most of it," Smith said. "It is hard, and part of it is just trying to be flexible and roll with the punches. We are trying to recreate that feeling of being together and just having regular conversations. It's hard with the delay now that we have to do it remotely from our homes."

The women still record, though -- finding the quiet spaces in their homes away from musician kids and rambunctious pets to record.

However, the pandemic has put everyone in the same boat, Parrish points out.

"I think everyone is trying to figure out how to stay connected in different ways.

"That's what folks are trying to recreate across the country -- the conversations we have on the podcast," Parrish said.

The tone of the most recent episodes has been a hot topic among the podcasters recently.

Smith said they work hard to talk about the pandemic, but are also mindful that people might want a break from the serious news.

"We want to talk about the serious stuff with COVID-19 -- thinking about equity and the community -- but we also want to keep it light and give people a break," Smith said.

Despite the rigors of recording during the pandemic, the podcasters said they are grateful to have a record of their time together.

"I feel really grateful. Doing something like this, it was not something I planned on doing. It feels like 14 years ago when we first started. I feel like we started this exactly at the right time. If we had just recorded a few episodes, I feel like we would not have continued because of COVID-19. But we had enough, and we decided to keep on. It means a lot to me now," Parrish said.

Smith said she feels like it is almost a recorded journal for her during this time.

"A lot of people are journaling now. I don't have to journal … I have thought about it a lot recently, we have this record now of this time together. The podcast has brought us closer together, for sure. It's fun to see and have a record of that," Smith explained.

Basham and Hobson said they are grateful for the ability to share their stories with others.

"In some ways it's helpful. There is so much despair and for all sorts of reasons. To bring someone a new perspective or a really deep belly laugh is a wonderful opportunity. To have just one person relate to what we are saying and know that they aren't alone or struggling -- that's really amazing. We are leaving a little something behind that is making people feel a little better about things. I'm really glad we did this," Basham said.

The ladies of the "That's What We Said: The Podcast" can be reached by email at whatwesaidpod@gmail.com.