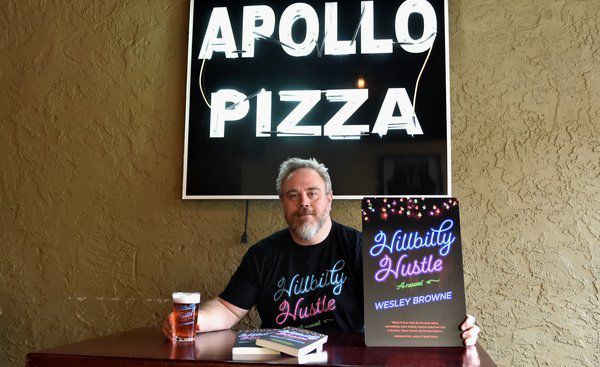 Wes Browne shows off several of his books as well as a t-shirt and metal sign with the design, and the "Hillbilly Hustle" lager glass. 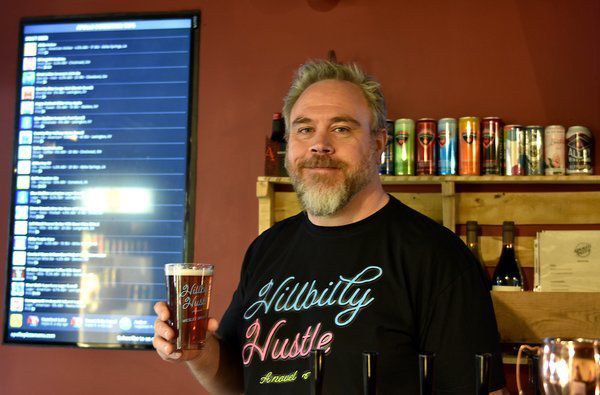 Wes Browne with one of the "Hillbilly Hustle" lager pint glasses that will be available at the book signings and lager tappings. 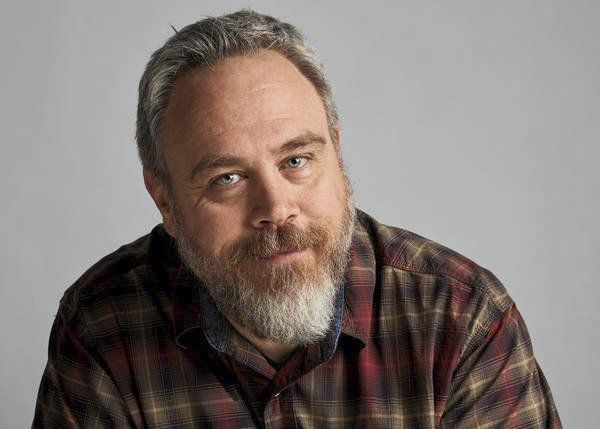 An author photo of Wes Browne.

Wes Browne shows off several of his books as well as a t-shirt and metal sign with the design, and the "Hillbilly Hustle" lager glass.

Wes Browne with one of the "Hillbilly Hustle" lager pint glasses that will be available at the book signings and lager tappings.

An author photo of Wes Browne.

Wes Browne's novel "Hillbilly Hustle" follows a pizza store owner as he decides to change the course of his side hustle to something new and it ultimately goes sour. The novel, which is in the genre of crime novels, is inspired by the "old days" of Apollo Pizza, which Browne currently co-owns, but the story is a work of fiction.

Browne told The Register the story has a few pieces of non-fiction. Such as the fact that back in the day it was known someone could go to Apollo and purchase marijuana. He also said, when someone ordered the spinach special, it meant they wanted a dime bag, and that made it into the story.

Another piece of reality which made it into the story, Browne said, was the inciting incident which happened in a card game in Jackson County above an arcade.

Browne added there are a few local figures from Richmond who pass through scenes and aren't named but can be recognized. He said those people are aware they are in the book and are excited to be a part of the story.

"It is genuinely a piece of fiction based in reality," said Browne, who is also an attorney in Richmond.

In "Hillbilly Hustle", Browne explained the main character is Nox Thompson, a 40-something-year-old man who owns a pizza shop called Porthos Pizza. Browne said the pizza place got this name after the heavy set comical member of the Three Musketeers.

Browne said Thompson acquired the pizza shop when he was in his 20s, and it had its hay day and did really well. However, when the story finds him, he is struggling. Thompson's family is also having a hard time and so he is caught trying to support his family as well as his business.

One way Thompson finds to help make ends meet is by playing poker on the side. Browne said poker was really big in the 2000s through about 2010. However, the book starts in 2011 when poker is beginning to dry up. So, to keep himself afloat, Thompson turns to selling marijuana out of his pizza shop.

"At first, it seems like the answer to his problems but it makes things worse," said Browne.

Browne said "Hillbilly Hustle" is the fourth novel he has written. He said he first started writing a novel when he was between his first and second year of law school in 1997. He noted the first three novels he wrote "weren't publishing material."

"Every single story you write you ask yourself, is it good enough? This one felt like I had something good," Browne said.

He began writing "Hillbilly Hustle" in 2014. Browne said he attended the Appalachian Writers Workshop to take a novel writing class and was told to develop an idea for a novel. It was then he thought the idea of a pizza shop which also sold marijuana could be an interesting idea.

Browne said "Hillbilly Hustle" had been rejected and revised before it was finally accepted. He told the story of how shortly after he signed his contract for the story in 2018, he went to another workshop in Oregon and brought his 100,000 word manuscript six weeks before his turn in deadline. At the time, the story focused on two main characters, one with more of an action focus and one with more of a dramatic focus.

Browne said there was an instructor there who told him he really liked the story but thought he should consider making it a 65,000 to 70,000 word novel and eliminate the more dramatic character. Browne went back to his editor who agreed taking out the second character could make the story more streamlined.

Browne started off by cutting the second character completely, which left him with about 50,000 words. He then began to rewrite the story. Browne brought back some scenes from the pieces he had cut, however, he changed characters around. He noted one male character became a main female character. By his deadline, Browne had 72,000 words of a complete manuscript.

"I sent it to my editor and she said 'you did it. This is it. This is what we want,'" Browne said.

However, that wasn't the end. He explained the University Press has peer reviewers who helped to refine the story. Browne also had friends help him work on the piece to finalize it. He said he had a couple of local guys who had worked with the Berea Police Department work with him on some of the law enforcement scenes, specifically the scenes where firearms were used.

Browne said Rob Gilkey looked over the scenes of one of the key characters who was a female tattoo artist. He said he wanted to be sure he had the scenes and background of tattooing correct.

"In the end, one person's name is on the cover, but there are literally dozens of people who helped me with the book," Browne said.

Browne said he has been practicing law in Richmond since 1999. He came to Madison County as a prosecutor and, in 2000, he opened a private law practice.

"I make my living by practicing law everyday," Browne said. He noted he and his family have been deeply involved in Madison County since they moved here.

Browne said he and the previous owner of Apollo, who passed away, were very close.

They had planned to just fix up the apartments above Apollo and rent out the pizza shop to people who had worked there before. However, it never worked out. After a couple of months, Browne said his partner approached him and asked if he thought they could run the restaurant.

But, the pair decided to give it a go and re-opened the restaurant. Browne said he remembers an old Topix forum asked the question of how long Apollo would stay open. He said the most optimistic person said six months.

"Now, we're eight years in," Browne said. The restaurant has expanded to four restaurants under the name of Apollo -- two in Richmond, one in Lexington and one in Berea. There is another called the Steam Engine Pizza Pub in Irvine. Apollo is also the official pizza of the Lexington Legends baseball team.

"It's been amazing to see what our staff and everyone has been able to do with it (Apollo)," Browne said. He said when they started the journey of running Apollo they had just wanted to save the one downtown venue. We said maybe we can break even, maybe we can pay ourselves rent."

He noted the main factor in keeping Apollo alive and active is the loyal customer base.

Browne explained "Hillbilly Hustle" will be available starting March 1 in stores. He said there will be about 24 stops on his book tour. There are stops in Kentucky, Tennessee, North Carolina, South Carolina, Michigan and New York.

Going along with his book, Browne has teamed up with Country Boy Brewery to create a "Hillbilly Hustle" lager. Browne said he worked with one of the brewers to create a distinct lager to go with his book. They picked traditional regional and Appalachian flavors and ended up with a blackberry and lemon lager.

"It's as they say, crushable," Browne said. He explained you can sit and have two or three without being overwhelmed. Browne said those who consider themselves serious beer drinkers will enjoy the lager as well as those who do not think of themselves as such.

Every sit-down Apollo will also have copies available for purchase. Browne said the Hometown Launch of the "Hillbilly Hustle" Lager will be held Friday, March 6, at the downtown Richmond Apollo.