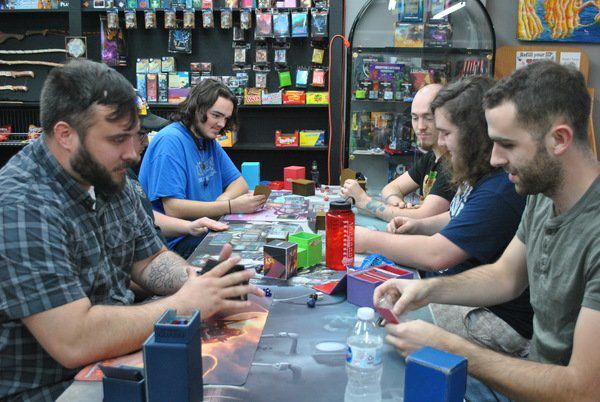 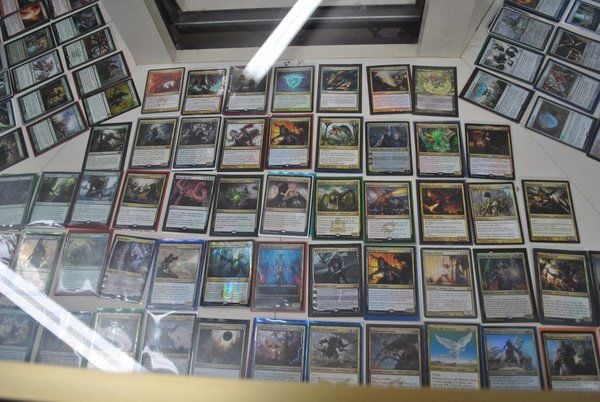 Dozens of Magic: The Gathering cards are on display inside a case at Knight's Lounge. 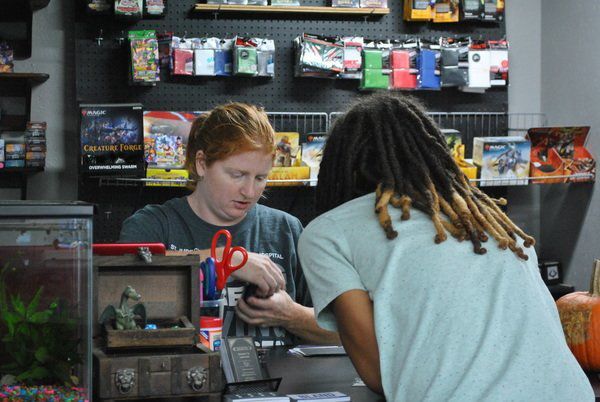 Keena Sparks, co-owner of Knight's Lounge in Berea with her husband Dennis, helps a customer at the store. 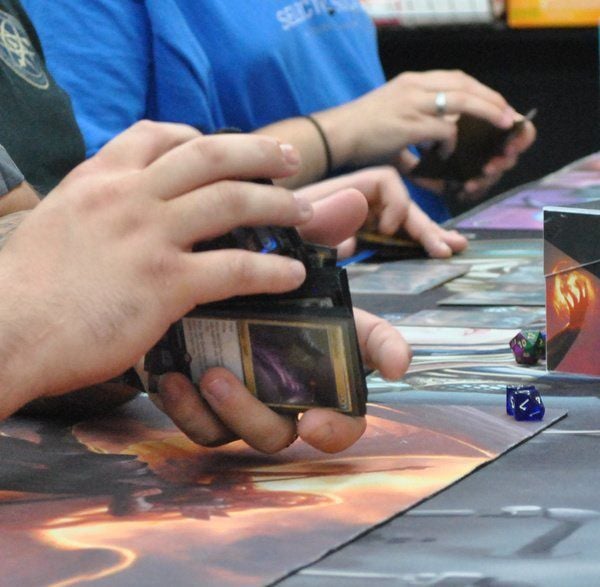 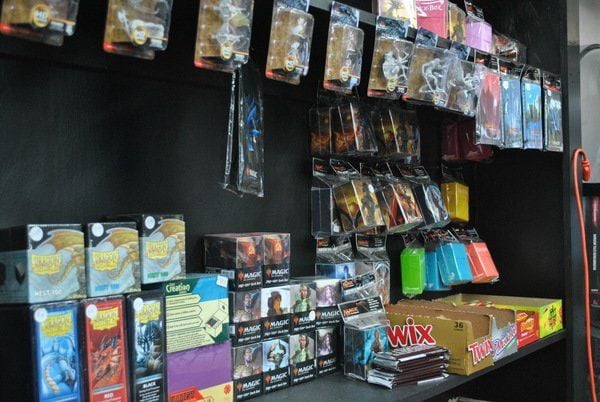 Knight's Lounge sells figurines, cards, dice and many other items for tabletop gaming.

Dozens of Magic: The Gathering cards are on display inside a case at Knight's Lounge.

Keena Sparks, co-owner of Knight's Lounge in Berea with her husband Dennis, helps a customer at the store.

Knight's Lounge sells figurines, cards, dice and many other items for tabletop gaming.

From board games to Dungeons & Dragons, tabletop gaming is a way of life all of its own for a large portion of Madison Countians.

"I think it takes a particular mindset to play these types of games, especially sit-down D&D games, and when you find like-minded people, it's nice to get together with like-minded people," said Maralee Carlson. "You all share common interests that other people you know in your life may not share with you, so instead of being the odd duck in the room, you've got a room of odd ducks."

She's one of several who belong to a gaming group in Madison County. Maralee, specifically, is with a group that meets at the Richmond branch of the Madison County Library. However, there are several other groups, too.

For instance, Eastern Kentucky University has its own, and maybe the largest, group of tabletop gamers, Cynder's Inn, but there are also groups that meet at Meeples, Legendary and Knight's Lounge in Berea.

That doesn't even begin to cover how many people meet at friends' homes to roll dice or who venture online to play with those who live farther away.

Plus, with the edition of people playing tabletop games online, it's possible that games such as D&D are more popular now than ever before, said Neil Carlson, Maralee's husband who also helps her with the group that meets at the library.

Neil and Maralee, of Richmond, came into tabletop gaming in different ways.

"I always wanted to play D&D, but as a kid, my parents wouldn't let me, because it was against our religion. So when we moved here, and I was disabled, and now I have all kinds of time, there was a D&D group that met at the cafe Oasis, which is now Meeples, so I joined that group," Maralee said. Then once she joined, she was hooked.

"There was puzzle solving. There was adventuring. There was whacking and killing and pitting yourself against a foe who's bigger and badder than you, and can you kill them by finding their weakness and exploiting that," she explained.

Neil, on the other hand, grew up gaming, starting with when he was 7 or 8. D&D just happened to come out as he was growing up, and he started playing that, as well. But he didn't join the Meeples group when she did (roughly four years ago), because he was a truck driver at the time and couldn't make it work with his schedule.

But with time, Maralee and Neil learned they wanted something different out of their gaming experience than what was happening at Meeples, so Maralee had the idea to move to the library, Neil said, and they have a Facebook page.

"So it all started 30-plus years ago with wanting to play, and now I get to play, and we moved to the library for the hours and being more inclusive at the library, because this way, everybody can come," Maralee said. "The parents I guess are more comfortable with the younger kids coming to the library."

The library's gaming group ranges from players who are 10 years old to 53 years old, the two explained.

"For a while, there was just three or four of us playing, and now we've grown to quite a respectable group where there's eight or nine of us every week," Maralee said.

And the Facebook group, Role Playing at Richmond Library, has almost 30 players in it, and it's always accepting new members, Neil explained.

"Not everyone comes every week, but we're always looking for more players," he said. And the group will play any game that players want to play.

"We're very open to anyone who wants to run something," Neil explained.

As long as the dungeon master knows the rules of the game they're introducing, the group will play whatever it is that people want to play. Additionally, they don't punish players if they can't make it every week to play as their character, Maralee said.

"Or if we know attendance is going to be off one week, then we'll play board games," she said. "We're not wedded to any one thing. It's whatever the group enjoys doing together."

The group is simply about having fun and meeting people with similar interests, Maralee said. And once gamers make friends, they can have more serious campaigns at their houses, for example.

"Some people may be thinking of doing it, but have no other way of getting in touch with other people," she explained, calling the group an entryway into tabletop gaming.

Plus, Neil said, the group does things together, such as going to comic con.

Similarly, in Berea, the Knight's Lounge offers a safe space for gamers of all kinds to get together and play.

The shop, owned by Keena and Dennis Sparks, opened in 2014, Keena said.

"It's my husband's thing more than mine," she said. "I like D&D, but he started it because of Magic."

When he first got the idea for it, he knew enough people who played Magic: The Gathering to have a solid player base.

"He knew there wasn't anything in this town for people to hang out" she said, explaining that some people would hang out at the skating rink, but there wasn't a dedicated space for gaming in Berea.

"He wanted something for people to come to and have fun, and he wanted to be able to have fun himself," she said.

Keena said she didn't think it would work out well, but she said whenever Dennis wants to do something, it's more of a bucket list kind of thing, and he at least wanted to try.

"It's worked better than I thought it would," she admitted.

Then, the grand opening went well, and now there are people in the shop on a daily basis to play games together.

"There's always somebody coming in," she said, adding that there are about 40 regulars who have loyalty cards for the store.

It's mostly a younger crowd in their late teens and college-age students, Keena said, and the most frequent games played are Yu-Gi-Oh, D&D and Magic.

And working at the store full-time is also a job that Keena enjoys.

"Here's what I like best. I can spend time with my kids. I can bring them here. I don't have to get a babysitter, and I can hang out with them all the time. And also, I really like D&D. It's fun. I don't think I'd be able to play it elsewhere," she said.

Keena explained what she likes most about D&D is that it isn't preset.

"Video games are preset. You make the decisions in D&D, and it may not be what anyone thought of," she said.

And the store is the reason she plays D&D. Before Dennis opened the store, she hadn't really played it, and it wasn't until she was working full-time at the store about a year ago that she got into it.

"The reason this place exists is because of Dennis," she explained. "I'm kind of an introvert. I've always been that way, but I can run the shop. … I take care of the things that need to be done, but I've never been much of a people person, and he's the one everyone hangs out with the most.

"I do have a small D&D community I hang out with and talk to a lot. But I try to be as outgoing as I can, but I'm not used to it. … I know I've got friends that I never would've had before. People that I would not have hung out with."

All-in-all, Keena said she knows the store -- and the D&D group she met because of the store -- is good for her.

"Sometimes you have to step out of your comfort zone," she said.