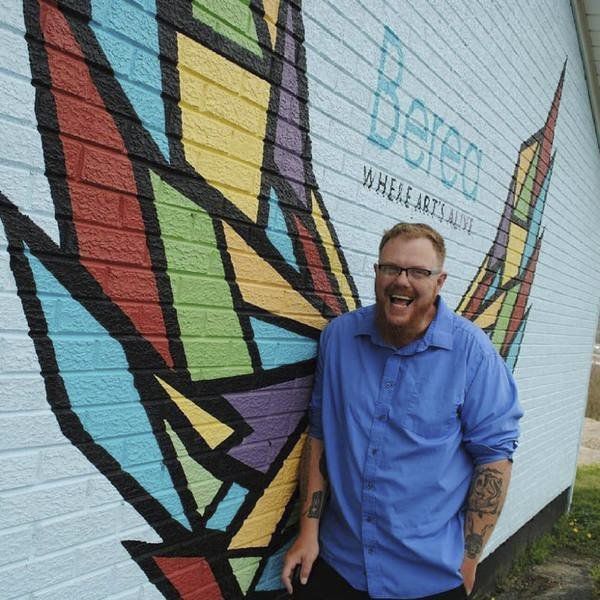 Jesse Albert Glenn stands with his first mural in the city of Berea, Wings of Berea, outside of the Knight's Inn. 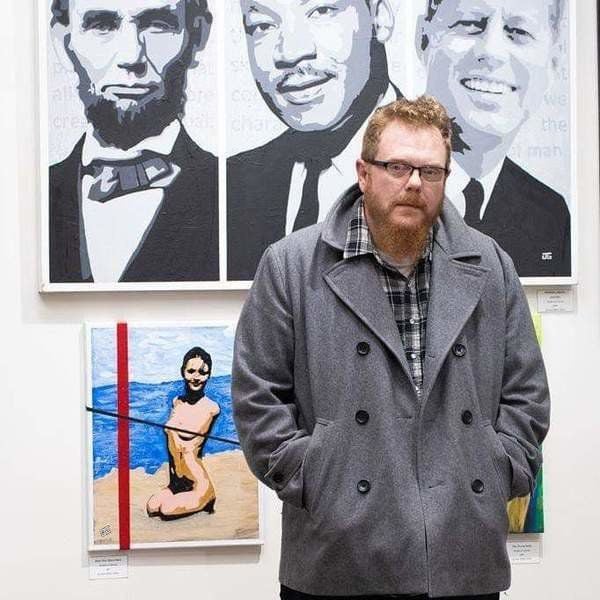 Glenn stands by some of his paintings in a gallery. 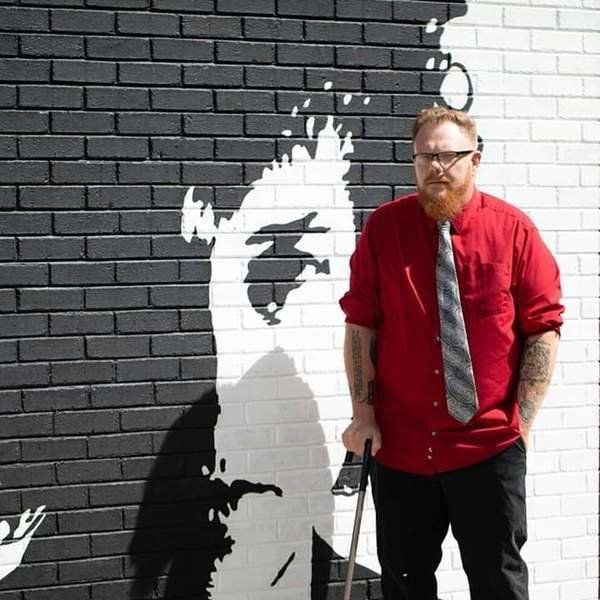 Glenn poses with his second mural to be done in Berea of one of his favorite musicians, Bob Dylan. 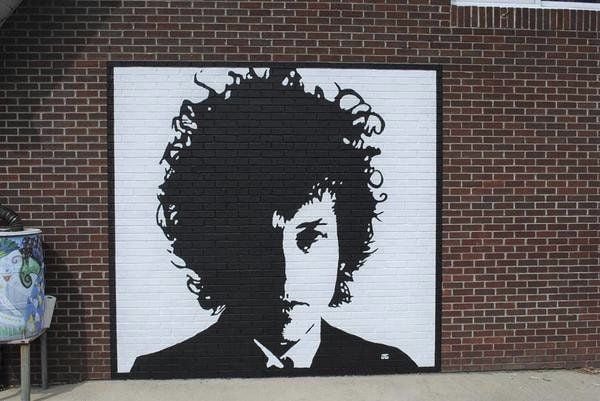 Glenn's Bob Dylan mural, which he did for free, outside of the Old Town Fudge Factory in Berea.

Jesse Albert Glenn stands with his first mural in the city of Berea, Wings of Berea, outside of the Knight's Inn.

Glenn stands by some of his paintings in a gallery.

Glenn poses with his second mural to be done in Berea of one of his favorite musicians, Bob Dylan.

Glenn's Bob Dylan mural, which he did for free, outside of the Old Town Fudge Factory in Berea.

For local artist Jesse Albert Glenn, his main focuses are his two kids, music and art with ambitions to “litter Berea in murals,” an effort he’s already begun with three completed murals, one in progress and one in the design phase.

Bereans have seen his work conspicuously around town with his “Wings of Berea” located at the Knight’s Inn and his Bob Dylan mural at the Old Town Fudge Factory.

Glenn says that his passion for art began early on, recalling family members buying him art supplies for Christmas and birthdays and always having a pencil and sketchbook in hand.

But being an artist wasn’t always something Glenn actively pursued.

Graduating from Madison Southern High School, he later attended Syrian College for computer graphic design with an aspiration to design album covers, but, as much as he loved to draw, “he loved the undo button a lot,” he claimed.

After working at what Glenn described as “normal jobs” for more than 10 years, he decided it was time to make his dreams a priority and pursue becoming a “successful artist.”

Glenn said he began by teaching himself to paint, as he had drawn with pencil and paper as a child, and designed art electronically on the computer as an adult. He explained after starting to paint, he developed a method that worked for him, which included both his skills in graphic design and painting.

Shortly after he started honing his craft of painting, Pinot’s Palette, a “paint and sip studio,” opened in Lexington asking for artist applicants, to which Glenn applied and got the job.

With the paint and sip organization, Glenn explained that most of his job was entertainment, while only 30% of it was actually painting.

During his two or so years with the organization, Glenn said that he was still submitting art everywhere, trying to get his name out there. And with his art continuing to sell, he kept at it, seemingly closer to his dream of being a successful artist.

After being a part of several art shows, Glenn heard of an art fellowship program in Berea, the Art Accelerator Program at Gallery 123, which he applied for and got into.

The program provides three to five upcoming artists the opportunity to showcase their art to the Berea community, earning a stipend while also learning from veteran artists in the area for up to 16 months. Artists have the potential to gain access to a dynamic studio space and collaboratively stock and manage the Gallery 123, in Berea’s Artisan Village.

“It is a really awesome organization,” he said. “It is getting paid to be an artist without having to sell any of your work.”

It was in his time with the accelerator program that Glenn started the ball rolling on murals for downtown Berea.

With the help of Jeffrey Carpenter, Glenn’s boss at the gallery, Glenn linked together with Ollie Drezek, a Berea resident and creator behind the now movement Murals of Berea.

“She was always wondering why there aren’t more murals in Berea,” he recalled. “And at the time she started researching to see if she could get some done, I got the fellowship, and so she got in touch with Sammi Rashid at Knight’s Inn and was the facilitator — and has been the facilitator for two of my four murals so far.”

With a desire to combine his love of music with his passion to paint, Glenn went to Drezek and said that if she could find a business or property owner who would let him paint musician Bob Dylan, one of his favorites, he would do it for free.

Once he completed that piece at the fudge shop in Berea, he made a decision that if a business or homeowner wants a mural — he will do it for free — at the expense of only the materials required and having complete creative control.

“I made a business decision — with murals especially — if you are going to get mural work and get paid for it, by the person who commissions it, they are obviously going to want what they want on that wall,” he said. “If I want to do murals of what I want to do on walls, I have to do them for almost free, and I am trying to get Berea littered with murals.”

Right now he is working on a “traveling mural” painting for the Glades Community Garden Wagon as well as designing a historical mural to honor former Berea mayor Steven Connelly, which has been discussed since his fellowship began.

On average, Glenn says that the murals take him about two weeks to complete depending on weather and specifics of the mural. He said that while it takes a physical toll working in the sun and on gravel for hours a day, when he steps back and sees the client’s reaction and feels his accomplishment, it’s all worth it.

“Anything I think people love to do, the process of doing what you love is sometimes tedious and sometimes not fun, but once you get that finished and you look back you are like, ‘I have just worked really hard to get something that I love finished,’ so it feels good, even though the process to get it finished may not be that amazing, it’s still a labor of love,” he said. “I mean the number one motivator in life is to accomplish something, right?”

So far, he has received nothing but a positive response from the community about his artwork and hopes to paint more.

Glenn said that If anyone wants a free mural, he has a lot of ideas — wanting to do a mural of Paul Simon, or a nature scene.

But in the long term, Glenn truly aspires to open a studio and gallery in Berea where he plans to sell contemporary fine art and host family paint parties or what he calls, “adventure paint parties.”

Similar to the plan of paint and sip, Glenn’s idea is what he calls, “paint and juicebox” appealing more towards families and kids and instead of just the painting to take home, you get to see the art come to life by experiencing the subject in the painting as well.

“The subject of paint class comes to life, so for example, if we do a painting of Spiderman, my son or friend will dress up as him and come in and visit the class,” he explained.

During his fellowship, he hosted painting classes at the gallery and conducted a survey asking how much participants would be willing to pay for his “adventure paint parties” and if they would participate.

He received good feedback from surveys, with people noting they would pay to be a part of his experience.

The parties will not include alcohol, according to Glenn, who says that he doesn’t want to cater his business to that.

“It is geared towards family and kids,” he explained. “Adults by themselves need alcoholic encouragement to paint, but with kids, you don’t have to have any incentive and be creative right off the bat.”

Now doing what he loves and sharing it with his community, Glenn has no plans to slow down with mural paintings and hopes to have his studio, Edge of August Studios, open within the next two years.

“I will be doing this until I am physically unable to do so or make enough money that I want to stop,” he laughed.