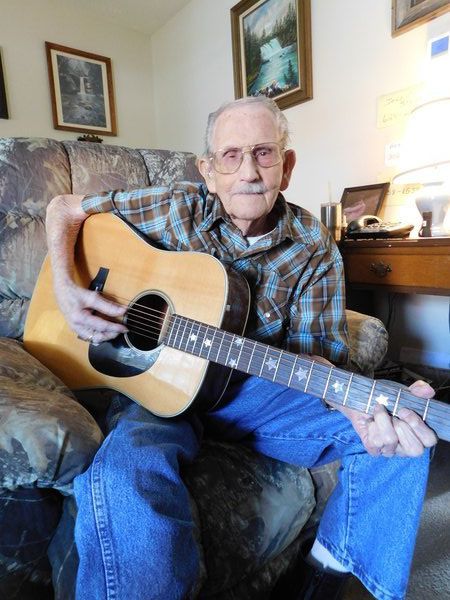 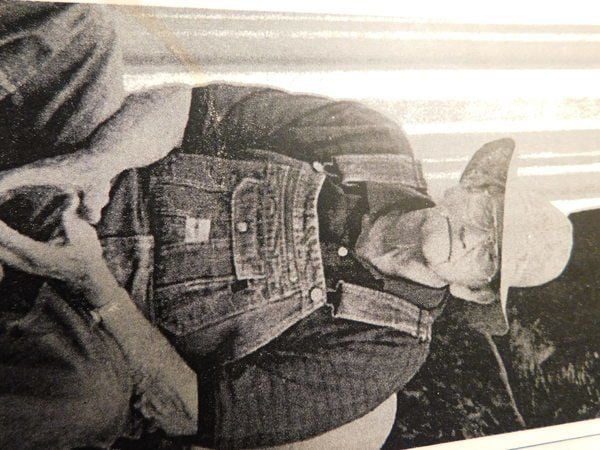 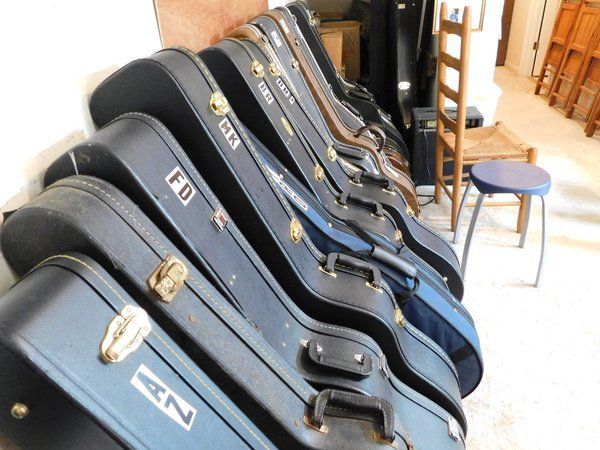 Barnes' large collection of guitars and banjos lines one wall of his music room. The cases are labeled in large letters to help him find a particular instrument. 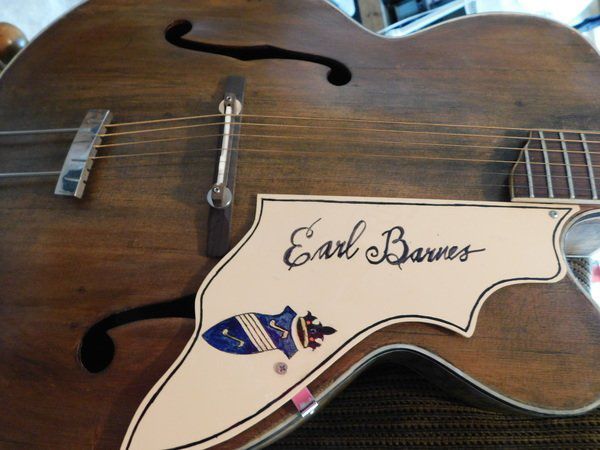 A guitar specially made for Earl Barnes. 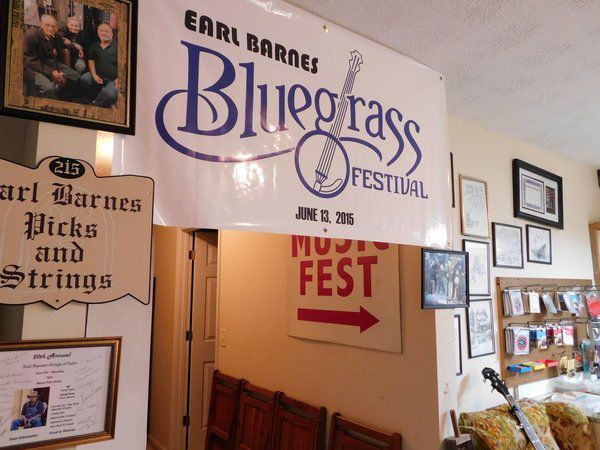 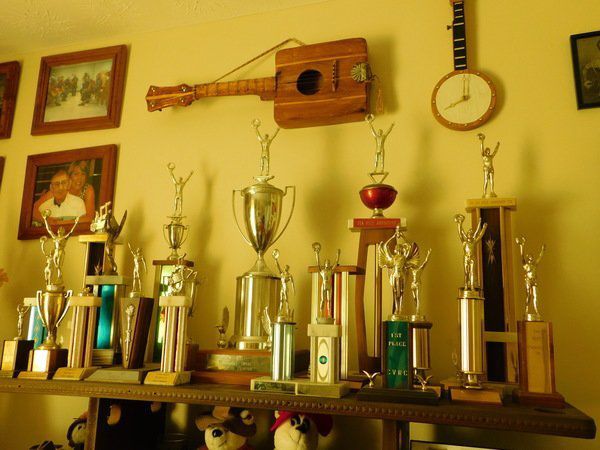 A cake-box banjo created by Barnes hangs above multiple awards for his musical accomplishments in his memorabilia room. 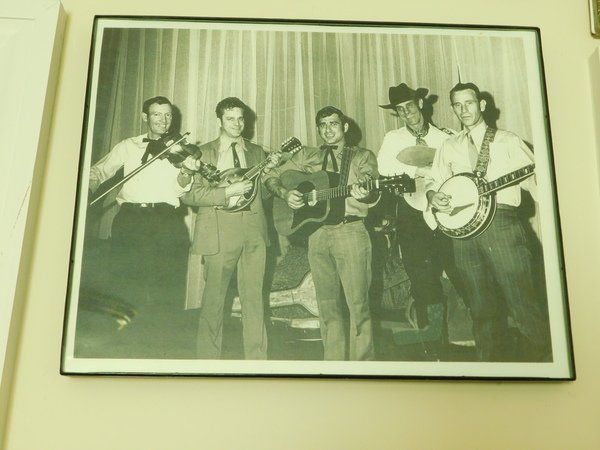 Earl Barnes, far right, performing with the band he started, The Bluegrass Travelers.

Barnes' large collection of guitars and banjos lines one wall of his music room. The cases are labeled in large letters to help him find a particular instrument.

A guitar specially made for Earl Barnes.

A cake-box banjo created by Barnes hangs above multiple awards for his musical accomplishments in his memorabilia room.

Earl Barnes, far right, performing with the band he started, The Bluegrass Travelers.

Earl Barnes lives the quiet life of a man just over the 91-year mark -- going to doctor's appointments, whittling wood, seeing his kids and grandkids and great-grandkids, enjoying a good meal, and oh yeah, hosting jam sessions in his basement twice a week while touring locally.

The nonagenarian is a bluegrass and country music legend. Legitimately, a legend. He's played at Renfro Valley since 1945 -- that's 73 years -- and he's their oldest living member. Barnes has opened for Bill Monroe, played with Lester Flatt, Earl Scruggs, Helen and Anita Carter of the Carter Family, Roy Acuff, and the McLain Family Band, to name a few.

"Flatt tried to hire me. I backed him up many times, and he was one of my favorite musicians and an alright guy," Barnes said. "He's done more for bluegrass than anyone else."

Barnes recalls Flatt inviting him and his friend, a bass player, to join him on tour. He said, "I want you boys to come and play with me -- I'll pay you $350 a week and furnish your clothes, and we'll be gone six weeks."

Barnes didn't take the job. "That killed it right there, being away from home and my family," he said.

He toured with The Bluegrass Travelers, which he started, The Richmond Ramblers, and The Cumberland Rangers, led by his Uncle Asa Martin, who would book some swanky gigs.

"I would get as nervous as a torn cat in a room full of rocking chairs, but we were always well-received wherever we went," Barnes said.

But his favorite people to perform with have always been his family. His earliest musical influence was his mother, who would sing to him and his brother for hours, rocking them gently to soothe and distract their minds from their empty bellies.

"I started singing old ballad mountain style with my mother in 1936, there was no radio or nothing but me and her entertaining the family on Saturday nights," he said.

He grew up poor, born on Jackson Branch in Madison County, later relocating to Barnes Mountain, where his Irish ancestors settled, in Estill County. He was born the year before The Great Depression and remembers going three or more days without any food and barely enough clothes to cover his body.

"I didn't have a pair of shoes until I was nine," he recalls. "My parents gave us their love when they had very little else to give, though."

His father was a farmer, and Barnes worked to learn the trade until a crop went south and he had to borrow $60 from his father to pay for groceries.

When he was introduced to radio early on, he would pretend to play guitar on an old broom and sing. Three years later, his dad traded guns for a D28 Martin guitar and could play "Wild Wood Flower."

"From watching him, I learned the chords," Barnes said.

It wasn't long before he started performing gospel music in tent meetings. "I learned to play clawhammer banjo from Grandpa Jones," he said.

"Later on, I developed my own style, where I play notes instead of chords. According to good guitar players and banjo pickers, I'm doing it wrong, but I've been doing it 81 years and they're all gone," he quips. "I don't copy anybody else; I do my own thing."

In the 1940s, he developed a taste for country music after watching some brothers play bluegrass at Woodland Auditorium in Lexington.

Barnes went to Renfro Valley in 1945, performing on weekends. He worked days at Bluegrass Hardware for 25 years before going into business for himself as a plumber and electrician. He and wife Jane shared four children and 63 years together. She passed away a decade ago.

Barnes taught clawhammer banjo, guitar, fiddle, mandolin and dobro for 55 years, instructing a new generation of bluegrass musicians, including two of his children, Randall and Danny, who toured with him as The Barnes Family Band at festivals like the Bob Evans Farm Festival. His sons now perform with bands that tour nationwide; Randy's with Joe Mullins & The Radio Ramblers, and Danny's with Blind Ricky.

He's accomplished much in his years of touring nationwide, recording multiple albums, writing over 200 songs, performing on radio and in movies likes KET's This Other Eden, 50 Years of Country Music, Virginia's Bicentennial, and Renfro Valley's Jubilee. He authored the book "A Voice from The Hills: Reminiscences of William Barnes," as well. His music is featured in the Smithsonian Institution.

He worked to bring bluegrass music to the community by starting the bluegrass festivals in Lexington and Louisville. This week, he opened the "21st Annual Songs of Faith" event at the Russell Folk Acton Center in Berea, performing with other musicians. He's slated to return to Renfro Valley in August to perform in their annual reunion concert.

These days, Barnes plays locally with a couple of bands and will travel up to 100 miles to perform, but his declining vision, hearing issues, heart condition and bladder cancer, which he's battled for six years, make long-term touring impossible.

Instead, he stays close to home and hosts jam sessions for his musician friends every Tuesday and Friday night in the music room of his Richmond home. Lining one wall of the room are cases of guitars and banjos, marked with large letters so he can identify them. He favors his Alvarez banjo and his Blue Ridge guitar these days.

It's a far cry from the $30 he scraped together for his first guitar in 1945. But the humble, hardworking and gracious man doesn't take one moment or opportunity for granted.

"I came from a log cabin in Estill to a stage in Renfro Valley to Woodland Auditorium in Lexington to the Grand Ole Opry," he says with a smile.

Some information has been changed or corrected since this story was originally published. The names of Bill Monroe and the McLain Family Band were spelled incorrectly.