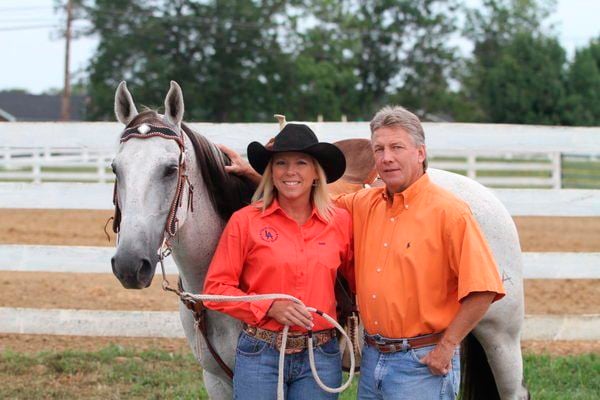 When he first moved to Madison County, Givens attended Eastern Kentucky University and graduated with a degree in animal science and a minor in business. While attending college, and after, he worked many different jobs at horse farms as he worked to make his way up the ladder in the industry. Givens said he started out mucking stalls and working as a nightwatchman until he was able to start consigning horses to sales.

At the start of his equine career, Givens worked primarily with thoroughbreds as Richmond is fairly close to one of the main thoroughbred centers of the world, Lexington. However, after a few years, he branched out into the realm of quarter horses.

"The thoroughbred market is up and down. You can loose a lot and gain a lot, but the losses are big in the thoroughbred industry. Quarter horses are more steady," Givens said.

Since the 1980s, Givens has been focusing on the quarter horse industry. Breeding, showing and selling horses and specializing in those that barrel race.

Givens told The Register that before the internet took hold of the equine market and people could browse and buy horses online, he focused on beating people in shows and winning championships to promote the horses he raised and sold. He would go out and show everywhere just to try to get his name out there.

"Truthfully, you don't have to brag. What you've done will speak for itself," Givens said. In 1985, at the World Championship for barrel racing, he met his wife Lauri. She is from Georgetown, and the two hit it off right from the start.

"She loves to ride and show horses, and I like to breed and raise them. So we just worked," he said. "We married and have raised horses and children together."

When Givens first began his ventures with quarter horses, a good barrel racing horse would be worth about $500.

"Now," Givens said, "they could be worth $50,000." He told The Register his style for breeding top quality barrel racing quarter horses has changed in the 30 years he has been in the business.

Givens used to pick quarter horse stallions that had a racehorse-type look and would breed them to his cutting-type mares. But, he said, over the years, quarter horse stallions have become really good for creating barrel racing stock, so he tends to use those. Givens said, with shipped semen, he can breed to any stallion he wants.

Every year, Givens said, he picks two or three stallions from across the world to breed his mares to. He then chooses some of his own stallions, which he called the best stallions in Kentucky, and breeds them as well.

"We keep all our good fillies," Givens said.

Over the past 30 years, he has kept all of the good mares who have come from his breeding program. He looks for the mares who are quality in the show arena.

"We pull them out early from their showing career if they're really good," Givens said.

When the mares that have shown great potential reach the ages of 6, 7 or 8, he will pull them away from the show ring and bring them into his breeding program. At those ages, Givens said, the mares have about 15 years of breeding potential. At the age of 23, he retires the mares and allows them to enjoy the rest of their lives.

His business of selling and breeding horses relies heavily on word of mouth. He said he has sold horses in Italy, Brazil, China, Mexico and Panama, as well as all over the U.S. Givens told The Register one of his best pairings came from when those in the horse industry in China reached out to Frankfort because they wanted to get into the barrel racing industry. But those in Frankfort were unsure of where to get the requested horses. So they came to Givens.

Givens said the business he built was somewhat pushed to the wayside with the growth of online equine sales.

"People think it's great because they can sit in their living room and shop -- sit at a computer and do their business," Givens said. However, he said his business comes from people finding their way to his driveway. Part of the draw to Givens' word of mouth business style is it is well-known he is truthful about the stock he sells.

Givens said if he has a horse he doesn't like, he will be sure to be open about it while selling it.

"I don't want people to take any of the bad ones on a false pretense. So people know it's not about the money. It's about the facts," Givens said.

But, Givens explained, most of his stock is good. He said the majority of the horses they sell are ones they have spent time and money on raising.

Givens has been off the show circuit for the past five years. Instead, he is focusing on the selling aspect of his business.

One of the biggest sales he participates in is a sale scheduled for September at the Kentucky Horse Park in Lexington. Typically, at the sale, Givens sells around 100 horses, including 40 of his own. Givens called the sale a tremendous avenue for people to shop for just the right kind of horse.

"It's like a candy store of barrel racing horses," Givens said.