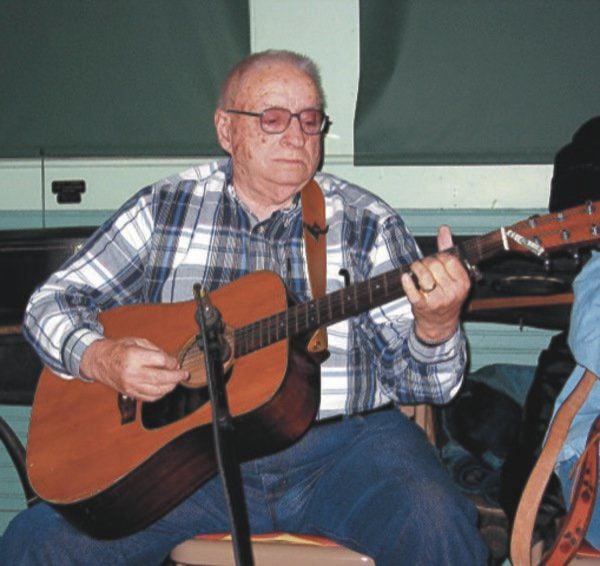 George Reese (pictured) played -- or "picked" -- his 1942 Gibson Southern Jumbo with a number of notable musicians over the years, including the bluegrass innovator Don Reno. 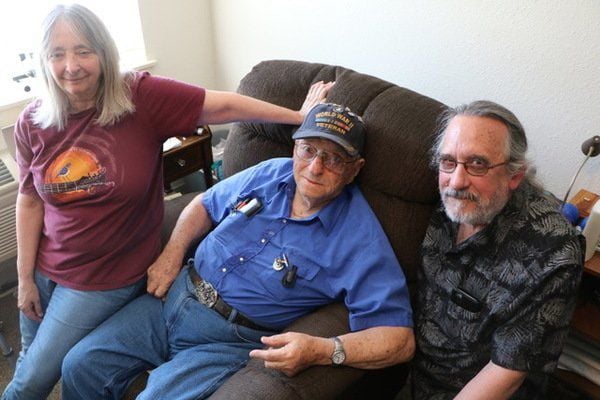 George Reese (pictured) played -- or "picked" -- his 1942 Gibson Southern Jumbo with a number of notable musicians over the years, including the bluegrass innovator Don Reno.

SOMERSET -- George Reese and his guitars have experienced many adventures together.

Including travels across the globe in World War II.

Reese, 93, is the father of Sherri Reese, known for her musical partnership with Joe LaMay. The latter two native New Yorkers have made a home for themselves in Pulaski County over the years, playing numerous gigs and creating the 3rd Friday Folk coffeehouse events every month at the Carnegie Community Arts Center.

That life of music was thanks in part to the example of Reese -- but Joe and Sherri weren't the only ones to feel that way.

And that's all thanks to a very special guitar -- a 1942 Gibson Southern Jumbo.

"It's a damn wonder," said Reese of keeping the guitar throughout his long life. "If I hadn't had some good buddies, it would have been long gone."

Reese, originally of Fulton, NY, acquired the guitar at a music store in nearby Syracuse in 1943. It cost $96.50. His mother gave him the money he needed to buy it, cashing in war bonds to do so.

"I got it just before I left for boot camp," he said.

Reese entered the fray of World War II and joined the Navy, becoming a SeaBee -- that is, part of the Naval Construction Battalion (or "CB"). The guitar was a little piece of home that he got to take with him into the changing, unsettling world landscape at that time, but it proved a little too popular with Petty Officer Second Class Reese's fellow servicemen.

"I damn near lost it," he said. "(Someone could) pick that sucker up and take off with it and go pickin' some place. I had my work cut out for me to keep my hands on it."

It wasn't a matter of a mean sergeant figure like one might imagine trying to spoil Reese's fun, though. "My commanding officers were all great guys," he said. "They were all construction men too."

Reese didn't write music, but he enjoyed playing his instrument and "picking" on it as much as he could. His musical selection is "strictly bluegrass."

He added, "We did pretty good. A bunch of guys in the service picked."

But life in wartime was not easy. Not only did the guitar very nearly get stolen, but it even survived a devastating explosion.

"I hauled it all across the Mediterranean, all across Africa, and all those places," said Reese, who noted that his unit traveled from one end of northern Africa to the other via World War I-style boxcar transportation, went up to Italy, and waiting there for the invasion of southern France.

That's where Reese very nearly lost his beloved Gibson -- and his life.

In 1944, Reese's unit was camped out in an abandoned house in southern France, guarding an ammo dump. While asleep on a cot in the basement, the ammo was set off, resulting in an explosion. Reese was injured in the incident, as the thick plaster ceiling collapsed on him, and he was taken to a hospital ship and transported to another hospital in Italy, where he stayed six weeks.

"While he was in the hospital, his unit shipped back to North Africa," said LaMay. "He lost everything, but one of his buddies grabbed his guitar and saved it."

When it wasn't dangerous, life during the war could be less than glamorous. Reese recalled staying in a "beat-up old town" in Italy, "nothing glamorous," with military accommodations on an old coal yard.

"A cloud of coal dust had been there for a year," he said, noting that when you stepped outside, your legs "would be black up to the knees."

Eventually, the war ended and Reese came home. Instead of going places like Italy and Libya, however, the native New Yorker headed south to more familiar names like Missouri, and towns like Nashville, where he pursued his passion for pickin', finding like-minded Appalachian musicians and gathering to share their music outside places such as the famed Ryman Auditorium.

"There were some pretty good pickers," he said, noting that he was proud to play with them. "It's something you did when you had the time to do it. We didn't always have a lot of time to do it, but we got at it every chance we got."

His greatest memory was playing with his musical hero Don Reno, one of the great banjo players of the 20th century and an innovator in his musical field.

"Don Reno was one of the seminal artists when bluegrass started," said LaMay. "He played guitar and banjo and had his own style and influenced many people. People heard him playing that style and just loved it."

Reese also played with member of Reno's family, Mac Wiseman and Charlie Chushman of Earles of Leister fame. Reese faithfully attended bluegrass festivals in New York and in other states, and taught himself to play the mandolin as well as the banjo.

"(Reese was) a much-sought-after addition to anyone's jam," said LaMay. "His style was unique and all his own."

Though he could hang with the best of them, Reese never wanted to "go pro" as a picker, noted LaMay; "he was content to jam with like-minded individuals. He much preferred to encourage young kids and pass on his knowledge."

As time passed, Reese needed to be near his family, so he came here to Somerset in 2005, where he became a fixture of Tuesday night jam sessions at the Carnegie Community Arts Center. He now resides at the Highlands Place assisted living facility. The guitar, meanwhile, is with his daughter Sherri and LaMay. But it's not far from its longtime owner -- and always near and dear to his heart.