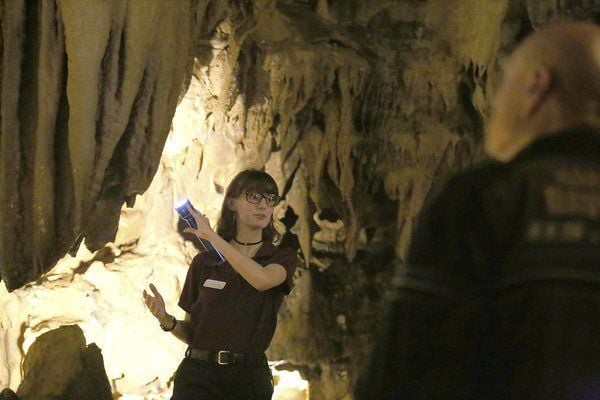 Kaylin Anderson, a tour guide at Diamond Caverns, talks about the formations inside the cave during a tour in August. 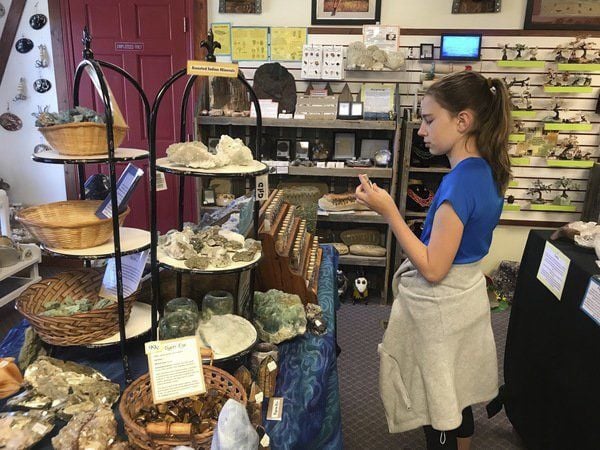 Marion Moore, 14, of Minneapolis, Minnesota browses in the gift shop at Diamond Caverns near Park City on Aug. 19, which was the 160th anniversary of the start of cave tours at the attraction. 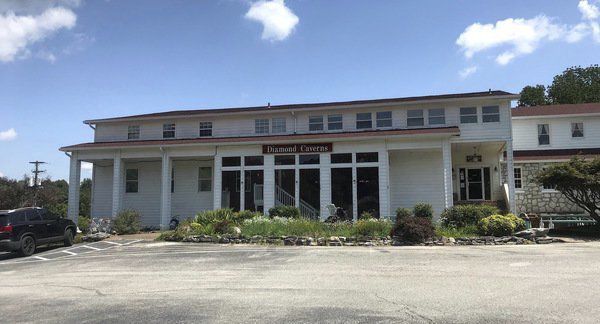 Diamond Caverns near Park City celebrated the 160th anniversary of the start of cave tours on Aug. 19, 2019.

Kaylin Anderson, a tour guide at Diamond Caverns, talks about the formations inside the cave during a tour in August.

Marion Moore, 14, of Minneapolis, Minnesota browses in the gift shop at Diamond Caverns near Park City on Aug. 19, which was the 160th anniversary of the start of cave tours at the attraction.

Diamond Caverns near Park City celebrated the 160th anniversary of the start of cave tours on Aug. 19, 2019.

PARK CITY, Ky. -- August marked the 160th anniversary of the start of cave tours at Diamond Caverns, which can be found along Ky. 255 inside the boundaries of Mammoth Cave National Park.

The attraction was discovered in July 1859, and one month later, on Aug. 14, to be exact, tours of the cave started, making it the second-oldest, continuously operated show cave in Kentucky and the fourth-oldest in the nation.

The discovery of Diamond Caverns and the start of cave tours there precede a lot of what Eric Helton, general manager, refers to as "staples of Americana."

"We predate the Pony Express (and) Mark Twain hadn't started writing yet," he said, adding that the Transcontinental Railroad and the Kentucky Derby also had not yet started.

In the 35 days from when Diamond Caverns was discovered to when tours first began, a lot took place.

"They built a building over the entrance. They built wooden stairs going into the cave. They had built wooden platforms in the cave, so that visitors weren't walking in the dirt and the mud," Helton said.

He referenced an article published in a Louisville newspaper at the time by a man who had said Diamond Caverns was "the best cave to go and see because folks traveling didn't have to change out of their travel ware to come and see the cave."

The cave tour is about ¼ of a mile in length and features two levels, but back then it wasn't quite as long.

"They were only able to get halfway into the cave at that time," he said.

The historic moment was not recognized with a formal celebration on Monday, but the staff did make a point to inform visitors about it.

"One-hundred and sixty is kind of an odd year. It's not 150. It's not 175, but it is a nice even number. It is better than 159, so we are just doing some give-aways today and making an emphasis for all of our visitors what an auspicious day it is," Helton said.

Julie DeGiovanni, manager of the gift shop at Diamond Caverns, wore a period correct dress, complete with a hooped skirt to celebrate the anniversary.

With temperatures outside soaring into the high 90s, being in a period correct dress on such a hot day made it very warm for DeGiovanni when she was outside.

"It's no so bad in the air conditioning in here," she said.

DeGiovanni even walked down the steep steps in the dress to the first level of the cave to peek in on visitors taking the tour. It was a bit tricky, she said.

"You've got to grab the hooped skirt in a certain way to get down the stairs," she said.

Her costume sparked a lot of comments from visitors.

One woman told her: "'Honey, by the end of the day you are going to be very hot.'"

She also got a lot of smiles and several people told her they liked her dress.

As an employee at Diamond Caverns, DeGiovanni said: "I'm honored to be here on our 160th."

Diamond Caverns is just one among several show caves in south central Kentucky and because it is located within the national park's boundaries some tourists expect visiting Mammoth Cave and Diamond Caverns to be similar in experience, but they are not.

"We are so decorated. Every foot you look in the cave, you're looking at formations literally the whole time you're underground," Helton said. "Being inside the national park like we are, we always get the question: 'What's the difference between you and Mammoth Cave?' We say: 'Mammoth is big and historic and we are little and pretty.' That's what really sets us a part."

Before Helton became general manager, he worked as a tour guide at Diamond Caverns.

"I used to tell people, 'You could spend hours underground at Mammoth Cave and never see a single formation,'" he said. "I would hear from people who had taken Mammoth's tour and then taken our tour and they would come up and say, 'This is what we thought we were going to see over there. When we think of a cave, this is what we think of.' We love the national park and we're good friends with them, but we certainly have the formations."

Craig and Michele Cooper of Owasso, Oklahoma, took a tour of Diamond Caverns on Monday.

Craig Cooper said he couldn't imagine what it must of have been like to take the cave tour 160 years ago and guessed that it was not as easy as it was on Monday.

"Formations are the same everywhere. They are formed the same way," he said. "It's still interesting."

Eric Moore of Minneapolis, Minnesota; his wife, Kelly; and their children, Louis, 12; and Marion, 14, were part of the same tour.

His son said the tour was "very cool."

"There was a lot of water-formed stuff that had a unique design," he said.

His sister also described the experience as being "really cool."

"I liked seeing all the formations and I learned a lot. I like the history and stuff," she said.

As for it being the 160th anniversary of cave tours at Diamond Caverns, she said: "That's been a long time and that's kind of crazy to think about."