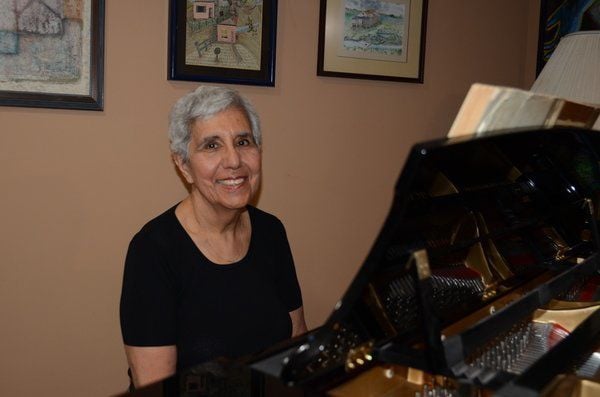 Pauline House has been named this year's lifetime achievement award winner by the Master Musicians Festival.

Step into Pauline House’s piano studio, and framed on the wall, you’ll immediately see this mouthful of a word: misodoctakleidist.

It means someone who hates practicing the piano or, alternatively, someone who isn’t very good at playing the instrument.

It serves as a small glimpse into House’s personality, hinting at her dry sense of humor, her love of language and the mission to which she has dedicated her life: to create an army of anti-misodoctakleidists.

Fittingly, House has been named this year’s lifetime achievement award winner by the Master Musicians Festival, which is held in Somerset. She is thrilled by the honor and a longtime fan of the festival.

“I go every year,” she said. “In 2010, I had open-heart surgery. Robert Randolph and the Family Band was playing, and I couldn’t go because I was recuperating. The next time they brought them in, I had just had chemo, but I wasn’t missing them again. I didn’t stay long, but I went, and I danced.”

Likely, few would be surprised by House’s grit, not least the nearly 300 students to whom she has taught piano over the past 43 years at her little Keyboard Klassics studio.

“When the MMF Board was choosing who has made a significant impact on our musical arts community, Pauline House’s name quickly came to mind,” said MMF President Tiffany Finley. “Not only has she guided many in our community with her love and knowledge of piano, her work with Watershed Arts Alliance has made a permanent impact on Pulaski County. We are so proud to honor Pauline this year.”

CHILDHOOD AT THE PIANO

House was born in 1939 in Providence, R.I., to Armenian immigrants who escaped genocide in Turkey. Boghos and Azniv Melikian were supportive parents who prized the arts and instilled this ethic in House and her three older sisters.

When House was 5, she played the piano for the first time — “I touched the piano and I knew” — and soon thereafter started taking lessons. Though she did not have an excellent teacher, she fell deeply in love with playing and, by the time she reached junior high, had befriended the school’s choral teacher, who “would pick me up and take me to concerts.” In the meantime, she accompanied the school choir on the piano, something she continued to do through high school.

By the time she was in the ninth grade, she had mastered Chopin’s “Fantaisie Impromptu,” an extremely challenging piece, and was regularly winning competitions. She also played the piano for the choir at the Armenian church she and her family attended.

“In about 10th grade, a visiting conductor came to our church and asked if he could speak to my parents,” she said. “He told them I needed a better teacher.”

She began taking lessons with Louis Moeldner in Boston, a 1.5-hour train ride each way, and quickly excelled under his tutelage.

“He had studied under great pianists and taught at the Boston Conservatory of Music,” she said. “He worked on my hand position and introduced me to more of the standard repertoire.”

At this point, she practiced the piano about four hours a day with one razor-sharp goal in mind: to be accepted at Juilliard School of Music.

For the first time, House felt nervous to play on the day of her audition. She had prepared a 1.5-hour concert, which featured pieces from every period: baroque, classical, romantic and contemporary.

“There were four people on the jury,” she remembered. “No one else was in the room. No parents. It was scary.”

But, as was her way, House excelled under pressure. A few weeks later, she got the news she’d been waiting for: she would start Juilliard in the fall.

House started Juilliard in September of 1959. At the time, just 200 students comprised the whole of the student body. William Schuman — composer of several symphonies, winner of the Pulitzer Prize and the National Medal of Arts — was president of the school, and Vincent Persichetti — who composed 10 famous sonatas and taught Philip Glass — was one of House’s professors. There was a Steinway piano in every practice room.

But there were no rules. Students could attend classes or not, just as long as they could do the work in the end. The only rule House remembers was posted on a bulletin board suddenly one morning. It said, “Please do not throw piano benches out the window.”

“Someone had gotten so frustrated practicing, he threw the bench off of the fourth floor,” House laughed.

She lived in a raucous apartment building close to Juilliard on Claremont Avenue filled with musicians: “If you entered the building and weren’t a musician, you’d almost get a headache,” she said. “Everyone was practicing. It was like being in a music school right there.”

She had two roommates — Elizabeth Orens, now an Episcopal priest, and Dianne Rahbee, a composer whose music has been performed in more than 20 countries — with whom she is still in touch.

House dove into her work, ramping up her practicing to six to eight hours a day, and diligently studying for her classes. For the first time, she realized she was not the most talented musician in the room, a reality she readily accepted.

“You should always go somewhere where you are not the best one necessarily,” she said. “You learn to work harder.”

She attended every concert she could, which wasn’t difficult given the number of artists who wanted to perform at Juilliard and the nearby Union Theological Seminary and Columbia University. At one point, her friends, who had stood in line for more than 24 hours, gave her a ticket to see Vladimir Horowitz perform at Carnegie Hall.

House graduated with a bachelor of science in piano performance and found a job at a little book store/coffee house across from Columbia.

Bill House had just come back to the States after serving in Germany when he walked into the coffee shop. He and the young barista from Juilliard started talking and, soon, he’d asked her on a date.

“I hadn’t dated a lot at Juilliard, because, truthfully, you didn’t have a lot of time; it was very rigorous,” Pauline House said.

But she made an exception for the young soldier, who was from Laurel County, Kentucky. On their first date, he took her to a Muddy Waters concert. On their second, the New York Philharmonic.

House said she knew she was in love on the day Bill came to pick her up at her apartment. She had a different roommate that year “who had graduated from Pratt Institute and was very attractive and very buxom.”

When Bill knocked on the door, her roommate opened it wearing a sheer slip and holding a guitar. Bill’s eyes widened at the sight of her and he leaned in.

“Is that a 12-string guitar?” he said in disbelief.

“That’s when I thought, ‘Oh, I like this guy,’” Pauline House laughed.

After 10 days of dating, Bill proposed to Pauline, a request she responded with, “Oh, you must be crazy.”

Bill returned to Kentucky, but wrote Pauline long letters, again asking her to marry him. Finally, she said yes, with the stipulation that she would never have to leave New York City.

A LIFE IN KENTUCKY

Bill returned to NYC so they could marry, but, quickly, Pauline knew he was unhappy with the pace and tenor of the city. She agreed to move to Richmond, Kentucky, so he could finish his degree at Eastern Kentucky University, though had a difficult time adjusting to the local culture.

Meanwhile, Pauline battled bouts of depression, which had started when she was 16. Instead of hiding it though, she decided to be open about her struggle, despite the stigma that is often associated with mental illness.

“Wherever we lived, I liked to take a class,” she said. “I remember I was taking a psychology class and we watched a film about suicide. Even though I told myself to keep my mouth shut, I found myself telling the class afterward that I had also considered suicide. Nobody said anything afterward, and I hated that I’d shared. Later, I went out and was looking at the bulletin board and this girl said, ‘Thank you very much.’ From that point on, I decided to share. There’s nothing wrong with, nothing to be ashamed of, being an emotional person. Sometimes, we actually grow through the process.”

After Bill graduated, they moved to upstate New York so Bill could attend graduate school. There, they had two daughters, Marta and Karen, and Pauline started giving piano lessons.

In 1976, they moved back to Kentucky, this time to Somerset, where Bill had gotten a job at Somerset Community College.

Though her move south was again difficult, she found togetherness in the Christian Church, where she began to play piano to accompany the choir. She also started teaching music at SCC and then opened her own studio, where she taught children as young as age 4. While at Juilliard, Schnichi Suzuki had taught students his now-renowned method, and she used his books. She also encouraged sight reading, enjoyment over perfection, and, of course, dedicated practice.

“I liked their openness,” she said of her students. “They would become excited about something that we all take for granted. Kids just have all of these wonderful things that as adults we repress in ourselves. They will get up and dance. And we don’t. Even though we feel like it.”

Her first student, Krista Wallace-Boaz, studied with House until she went to college, eventually pursuing a master’s degree in music at Northwestern University. She now teaches at University of Louisville.

Other students went on to become doctors, lawyers, and attend ivy league schools and students still come back to visit her.

“Josh Bentley came by one day and told me, ‘Mrs. House, I’m playing some jazz,’ and wanted a Bach book and I said, ‘Yay!’”

Meanwhile, she became deeply involved in Watershed Arts Alliance, whose goal is to bring artists to Pulaski County, as well as provide art mentorship to youth. She started as a board member and was then executive director for 15 years.

Collaborating with others, she helped execute performances of Beethoven’s Symphony No. 5, Gershwin’s “Rhapsody in Blue,” and Handle’s “Messiah.”

With House’s encouragement, Kentucky poet James Baker Hall likewise came to town and was greeted by a crowd of more than 100 people.

“I remember he said, ‘This many people to hear a poem?’”

The most memorable part of her tenure was when poet Wendell Berry came to Somerset.

Along the way, she found her place and formed a deep appreciation of the area.

“There is a natural beauty here and the kindness of many people is incredible,” she said. “They will open their doors to you and invite you in.”