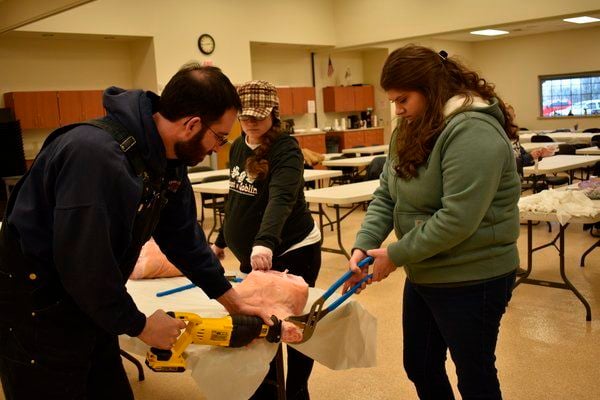 Brandon Spears and Julia Reid help to saw off the hock of a ham. 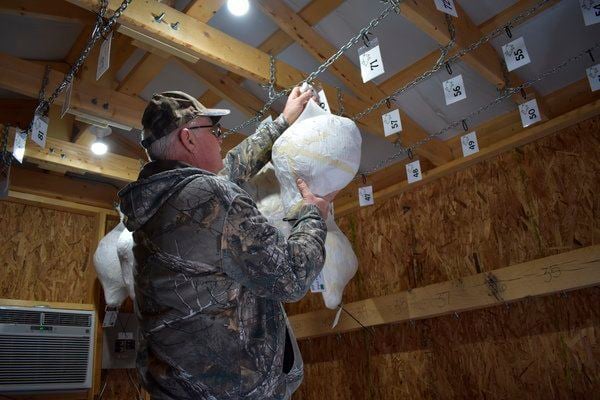 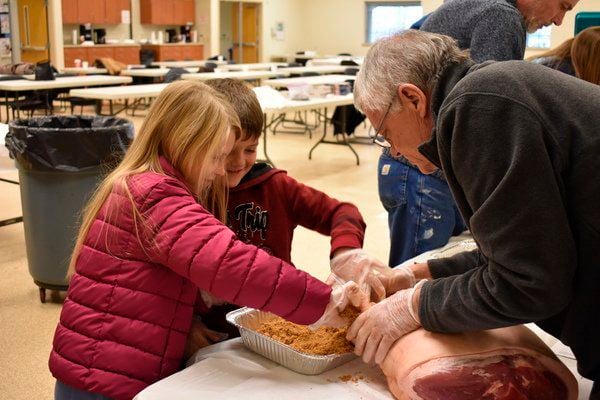 Skylar Reams (left) and Brody Cruse are shown how to put the curing rub on a ham by Brody's grandfather Ken Bellamy.

Brandon Spears and Julia Reid help to saw off the hock of a ham.

Skylar Reams (left) and Brody Cruse are shown how to put the curing rub on a ham by Brody's grandfather Ken Bellamy.

Brandon Spears, Madison County agriculture extension agent, told The Register that the hams used came from the University of Kentucky's animal science department's deal with a packer in Indiana. He said they went early in the morning to pick them up from Finchville Farms, located in Finchville Kentucky.

Julia Reid, a Madison County 4-H assistant, said the number of 4-H students has doubled from last year to this year with 21 kids participating. Twenty of them, with one being a Clover Bud (younger than 9), will be curing two hams. Spears explained there are also adults who participate, and with them included there will be 85 hams cured this year.

Spears said the ham barn, which was built three years ago at the start of the project in Madison County, has concrete floors and insulation. He added that the building has an air conditioner to keep the hams below 40 degrees.

In May, Spears said, they will come back again and shuck the ham, which means they will clean off the old cure and put a fresh "sock" over the ham. Then, they rehang the ham and it will go through the "summer sweat," which dries it. In mid July, the ham will be ready for the participants to take home. He explained, though, that the adults have an option to keep their ham hanging longer. Reid said that she knew of one man who had been curing a ham for 50 years.

"I'm thankful to get to carry on the tradition that meant so much to my family," Reid said. She cured her first ham when she was 9 years old with her 4-H group. Reid explained that about half of the kids from the Country Ham Club last year are returning again this year.

Reid explained that most of the youth who are involved in the ham curing will keep one of their two hams for themselves and will sell the other at the ham auction in September. She said that last year, they averaged about $550 dollars for the hams. The youth got to keep all of their earnings and use it for whatever they wanted.

Reid explained that as a part of the Country Ham Club, the 4-H youth learn how to introduce themselves, shake hands, make business phone calls and more. So as a part of the ham auction, the youth will call people over the phone to invite them to the auction and will greet all of those in attendance at the door and shake their hands.

"Communication and business skills are an important part of the club," explained Reid. She also said that learning about where the ham that they are curing came from is also an important part of the group. She said that before the year is over, the youth will dissect a fetal pig as well as go to the UK meat lab where they harvest animals. Reid said they are also hoping to take the students to a hog auction at the Richmond Stock Yards.