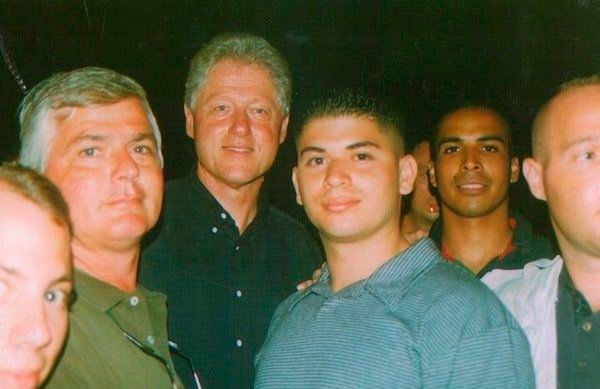 Ramon Romero meets President Bill Clinton as the president thanks him for his service in presidential security. 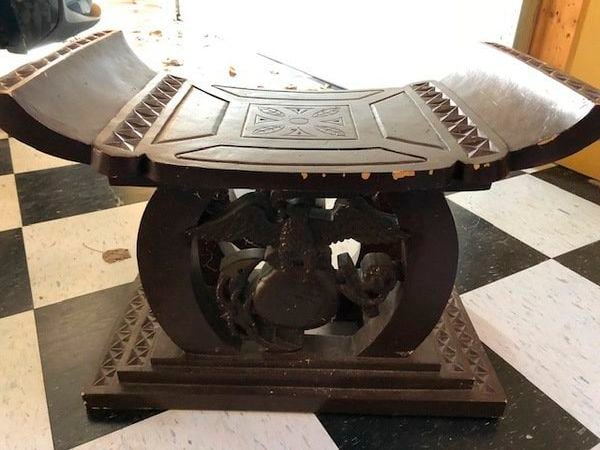 Pictured is the Ashanti bench given to Ramon Romero by an Ashanti king, during his time of military service in Ghana. Out of many accolades received for his military achievements, this one stands out to Romero as one of his greatest honors. 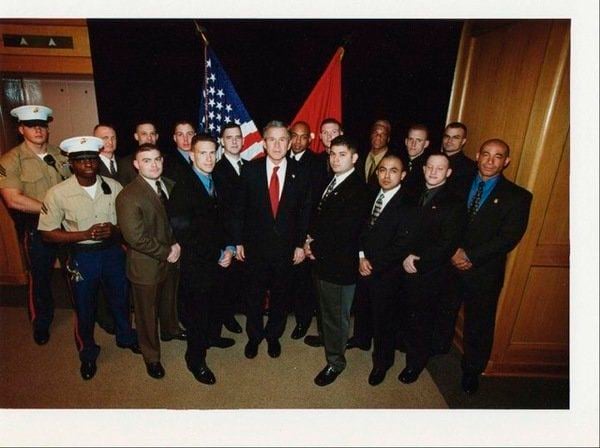 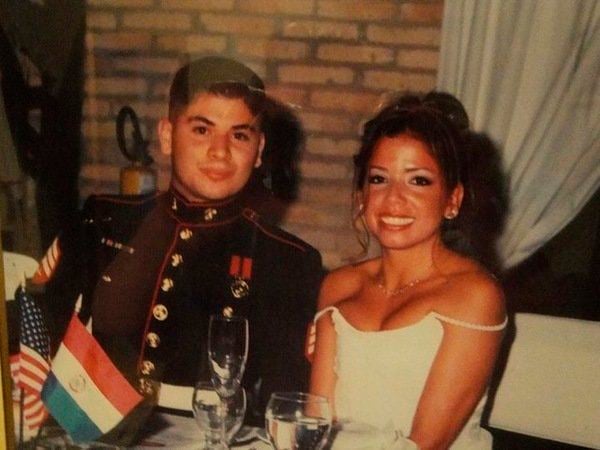 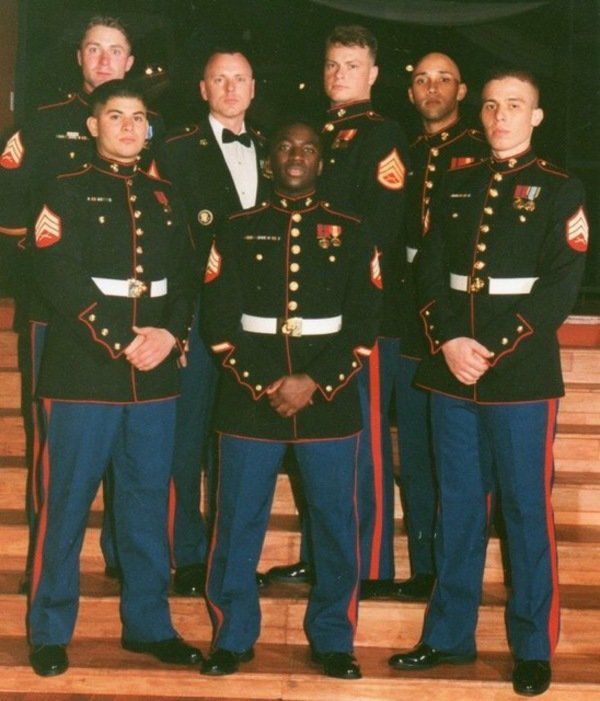 Ramon Romero meets President Bill Clinton as the president thanks him for his service in presidential security.

Pictured is the Ashanti bench given to Ramon Romero by an Ashanti king, during his time of military service in Ghana. Out of many accolades received for his military achievements, this one stands out to Romero as one of his greatest honors.

"Military life is a life of service," said Sergeant Ramon Romero of the U.S. Marine Corps. "If you want to give something to a veteran, then make them feel needed by offering opportunities to give."

The military has been woven into Romero's life for many years. He served actively from 1997-2007, including multiple overseas posts such as Paraguay, Colombia, Ghana, South Korea, El Salvador and Iraq. Today, as plant manager for Novelis in Berea, he continues to utilize the skills and character attributes built through his years in the Marine Corps.

Boot camp recruits don't always make it through boot camp, with about a 15% attrition rate, according to Romero. His training in Quantico, Virginia was an even more rigorous program with a 45% attrition rate, meaning nearly half of new recruits would quit the program.

"MSG (Marine Security Guard School) is considered the second most difficult in the Marine Corps due to its unique trait requirements," Romero explained.

While in high school, Romero's father, a former Marine, provided valuable guidance through the enlistment process. "Since my ASVAB scores were high enough for any MOS (Military Occupational Specialty), I took his advice and signed up for a trade (Electrician & Maintenance)," he said.

After a couple of years, Romero decided to join Security Forces.

"My father traveled to Quantico to see me graduate from one of the toughest schools the Marine Corps had to offer." Romero recalled.

"On Thanksgiving Day of 1999, I arrived to my first post (U.S. Embassy) in Asuncion, Paraguay," Romero related. He was notified that tanks were on their way to attack their post, and he needed to act quickly. "It was not a drill. I was 21, just notified that we were going to be attacked, and had to react a highly elite team of Marines to respond."

More details emerged quickly as Romero and his team mobilized, and they recognized that Paraguay was a young democracy, and some loyalists to the former dictator were heading their way to attack. The U.S. Embassy represented democracy and was a threat to these loyalists.

"We coordinated an evacuation for U.S. personnel and took the necessary actions after the appropriate level of force was authorized," he said.

Romero's assignment in Paraguay left a lifelong impact on him in a personal way as well: he met his wife Sandra while stationed in Asuncion.

"I knew the very instant I laid eyes on her that we were going to spend the rest of our lives together," Romero said. They were married in 2003. "My wife has sacrificed much, leaving everything and everyone she knew behind to start a life with me."

After his leadership in Paraguay, Romero was recognized by the Embassy and assigned to increasingly important roles.

"I served on two POTUS teams for U.S. Presidents, heads of state and others," he said. He also shouldered heavy responsibilities while stationed in Fallujah, Iraq in 2006.

Romero said that in all of the major military events he was a part of, he witnessed impressive courage from his fellow Marines. At U.S. Embassies, sometimes only five Marines are responsible for all American citizens in a foreign country, putting an enormous amount of pressure on those Marines to follow evacuation or internal defense protocols.

"Seeing America from abroad makes her that much more special," he said. "It's difficult to put into words what we as Americans take for granted. In many of the countries I served in, we saw hunger, difficult and unsafe living conditions. Yet, everyone had a smile on their face and was content in the daily struggles."

"I've received several formal awards for actions under pressure while in service, but one of the honors that stayed with me came from an Ashanti King in Ghana, West Africa," Romero said.

Romero and some other Marines presented a gift of Puerto Rican rum and the king welcomed them warmly. Children ran around them curiously poking at their "white" skin, and the king gave them a handcrafted Ashanti wooden stool. Romero said it was such a beautiful experience.

Transitioning From Military to Civilian Life

"The military provides a world within the outer world that is safe," Romero explained. "The Marine Corps felt like a brotherhood. The Marine Corps trains unpolished young civilians in leadership, how to build teams and exposed me to the concepts of honor, courage and commitment."

After so many years of success within the Marine Corps, Romero was unsure of what it was like to be a civilian in the private sector. His military concept of teamwork was vastly different from that of many employment situations in the U.S.

"It was difficult to understand why civilians feared losing their jobs, or would undermine each other for an opportunity," he said.

"In the Marine Corps, 'Troop Welfare' means that your team's needs come before yours," Romero added. The transition to civilian work was a challenge: supervisors were not trusted by those under their authority, nor were they well-versed in how to manage a team.

"I quickly knew that I had to earn trust under pressure and try to re-create the safe atmosphere Marines operate under to help build high-performing teams," he said. "What I thought were universal traits seemed to be lacking in the private sector and is what has propelled my civilian career."

Romero is now one of the youngest plant managers in Novelis North America.

Honoring the Military and Their Sacrifices

For civilians unsure of how to honor military members, Romero advises people to ask questions and show interest.

"Some veterans don't mind sharing their experiences," he said, "and if they don't feel like talking about it they'll let you know."

One key way to support veterans, Romero emphasized, is by hiring them. He said companies get much more than they realize when they hire veterans.

Romero's life of service serves as an inspiration to many in Madison County and beyond.

"Very few things will make a veteran as happy as having the opportunity to give, help, support, in a continued life of service," he said.

EDITOR'S NOTE: This story is part of The Register's annual Salute to Veterans. Stories also appeared in Friday's edition in the paper and a special section. Copies are available at The Register during normal business hours Monday through Friday.