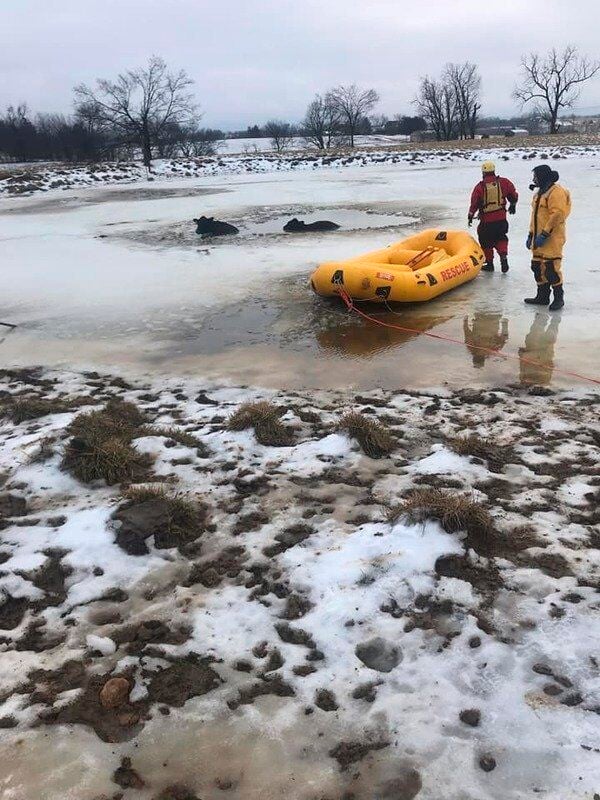 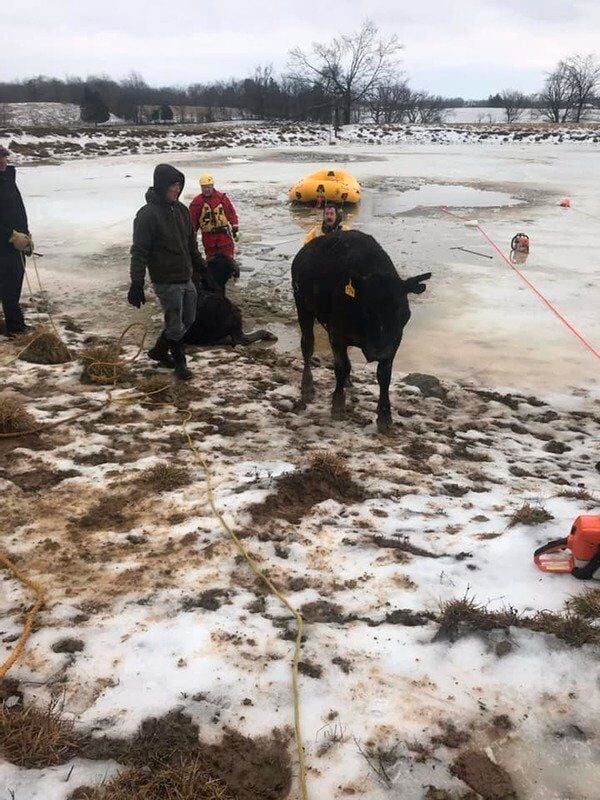 A cow that was trapped in an icy pond on Monday is freed. 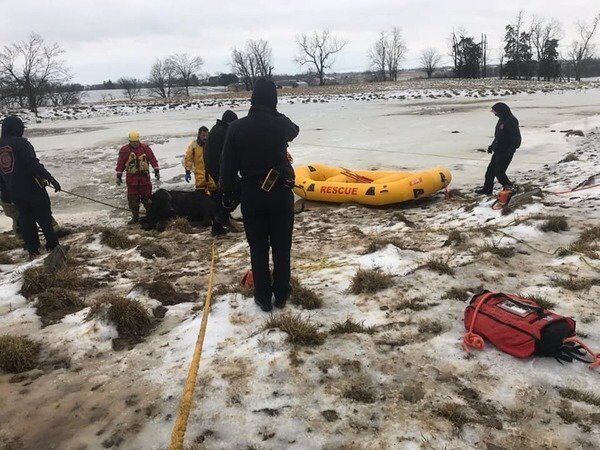 A cow that was trapped in an icy pond on Monday is freed.

There’s the old cliché about firefighters rescuing cats from trees, but on Tuesday local fire departments were not called upon to throw up their ladders and coax a timid feline — it was bovines in danger.

Cows instead of cats.

According to Merwyn Rhodus, a firefighter with the Madison County Fire Department, the station received a call around 8 a.m. on Monday regarding two cows trapped in an icy pond on Hunter Lane.

Once Rhodus and other firefighters were on the scene, they quickly realized they would need some further assistance.

“They were stuck in the pond, deep in the mud about 50 feet out from the edge of the pond,” Rhodus explained. “They must have tried to walk across the ice to find some water and busted through and got stuck.”

The firefighter said the ice was so thick the cows could not break through it to get back to the shore and were stuck in the frigid waters.

That’s when Chief Sam Kirby and the Richmond Fire Department received a call.

“They asked for our assistance because we have a boat and the wet suits to go in and try and save the cows,” Kirby explained.

Pretty soon about six firefighters from both departments were on scene to assist with the rescue operation.

Kirby said firefighters went to work using axes to try and break a path in the ice to deploy the boat and get closer to the trapped animals.

Rhodus said the firefighters tried to move as quickly as possibly due to the cold temperature that morning.

“Where it was so cold, you could tell the cows were possibly experiencing some hypothermia. They were exhausted and were not moving much. We knew we needed to get them out of the water,” he explained.

After a path was cleared, firefighters used the boat and some ropes to pull the cows towards dry land.

“We were prepared to do what we had to do to get them out safely,” he said.

After about two hours, the cows were out of the pond and safe.

Kirby said the fire department usually responds to calls for animal rescues once or twice every few years.

A year ago, the Madison County Fire Department rescued a horse who was trapped in deep mud, Rhodus said.

“We do it all,” Kirby said with a laugh. “We pretty much have to be prepared for about anything.”

While it wasn’t the cliché animal rescue fire departments have been characterized with, both local departments said they were glad to be able to assist.

“I called the landowner about two hours after we left and he said the cows were back to normal. They were up and walking around and were eating. So, I was glad to hear that,” Rhodus said.

While it might have been easier to rescue an 8-pound cat, instead of wrangling two 2,400 pound cows — both fire departments said it is all part of the job.

“We’re known as the multi-tool department for a reason. I haven’t seen a limit to what the fire department has been called to help with,” Kirby said. “That includes cow rescues.”