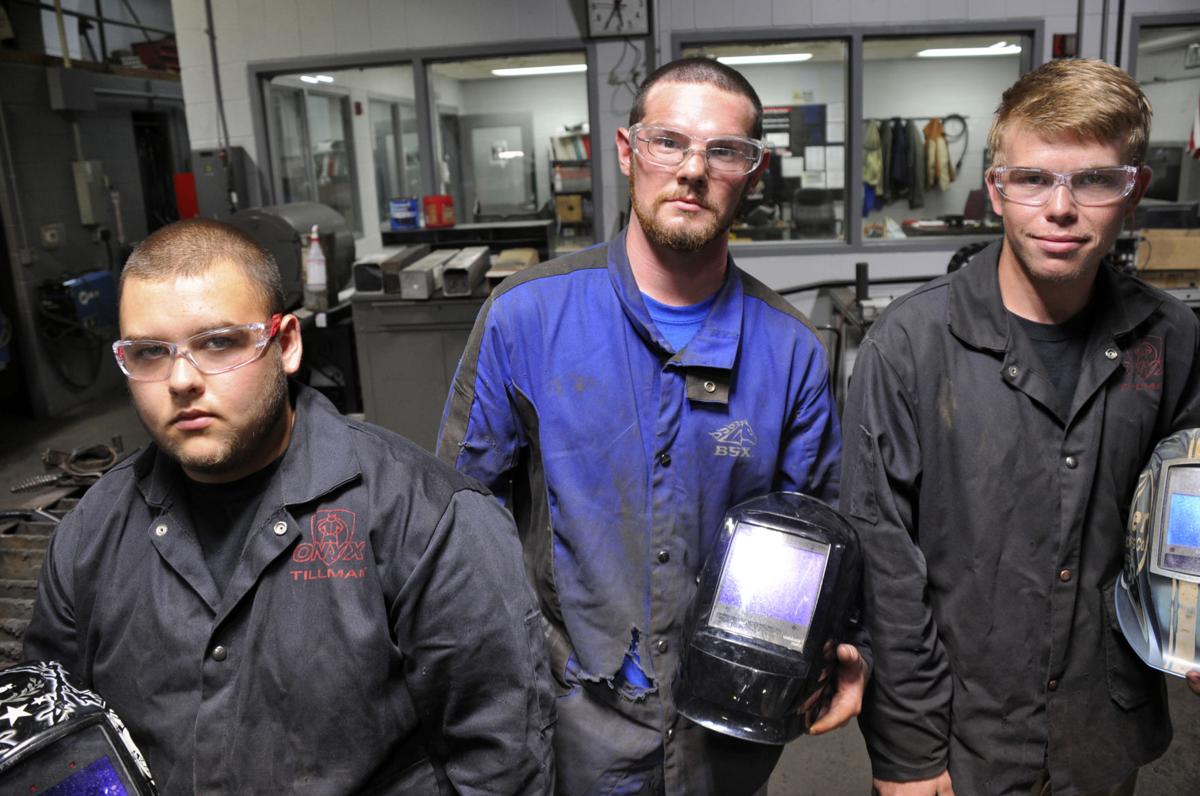 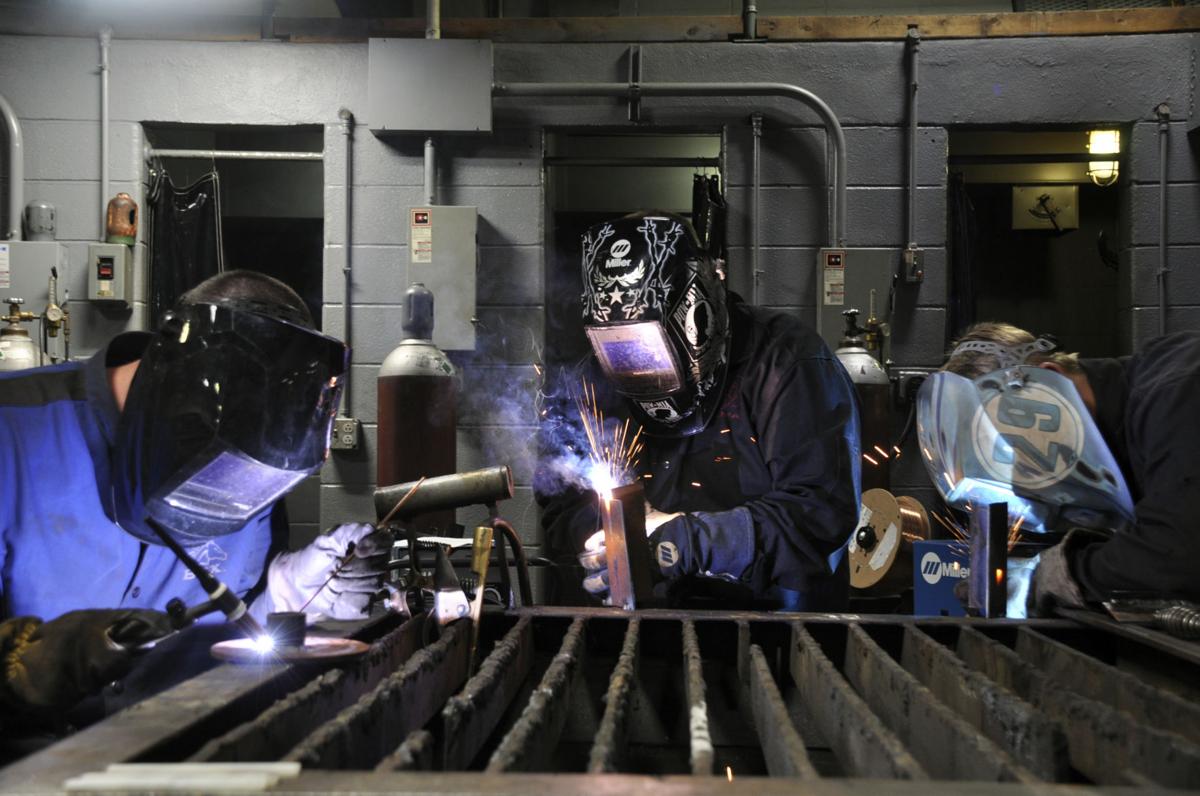 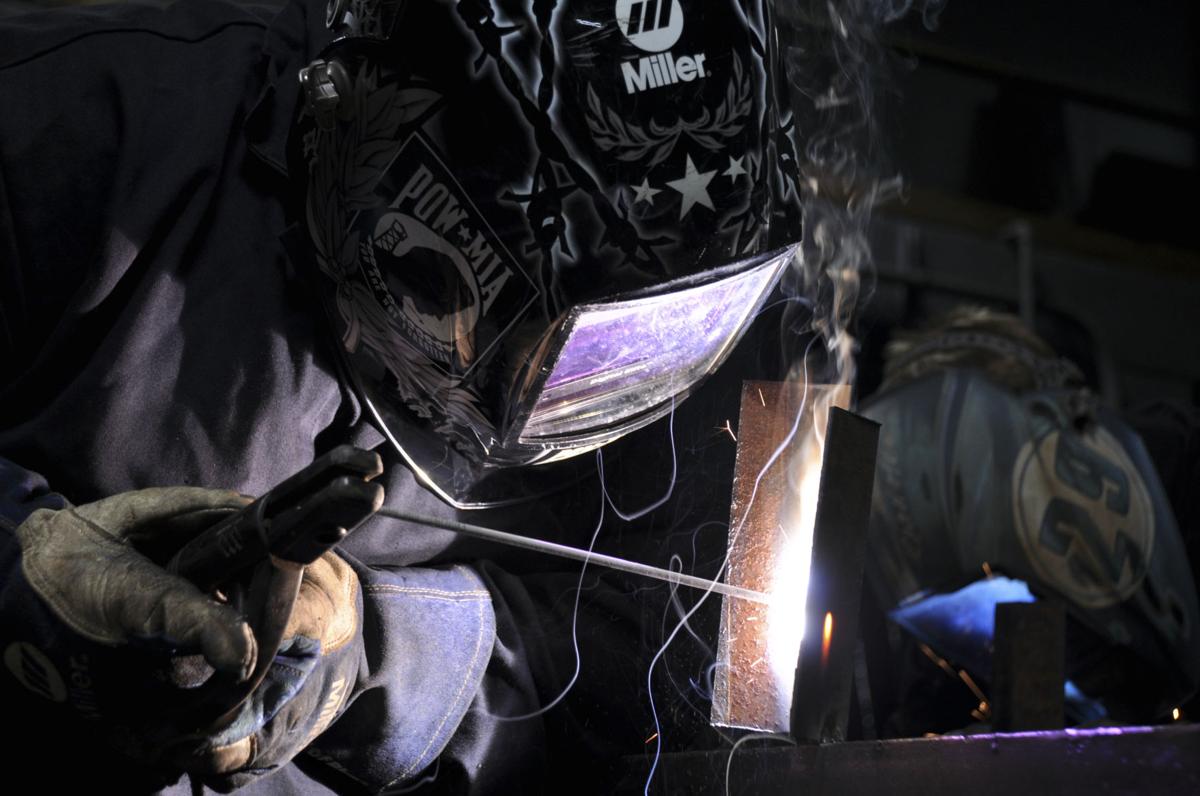 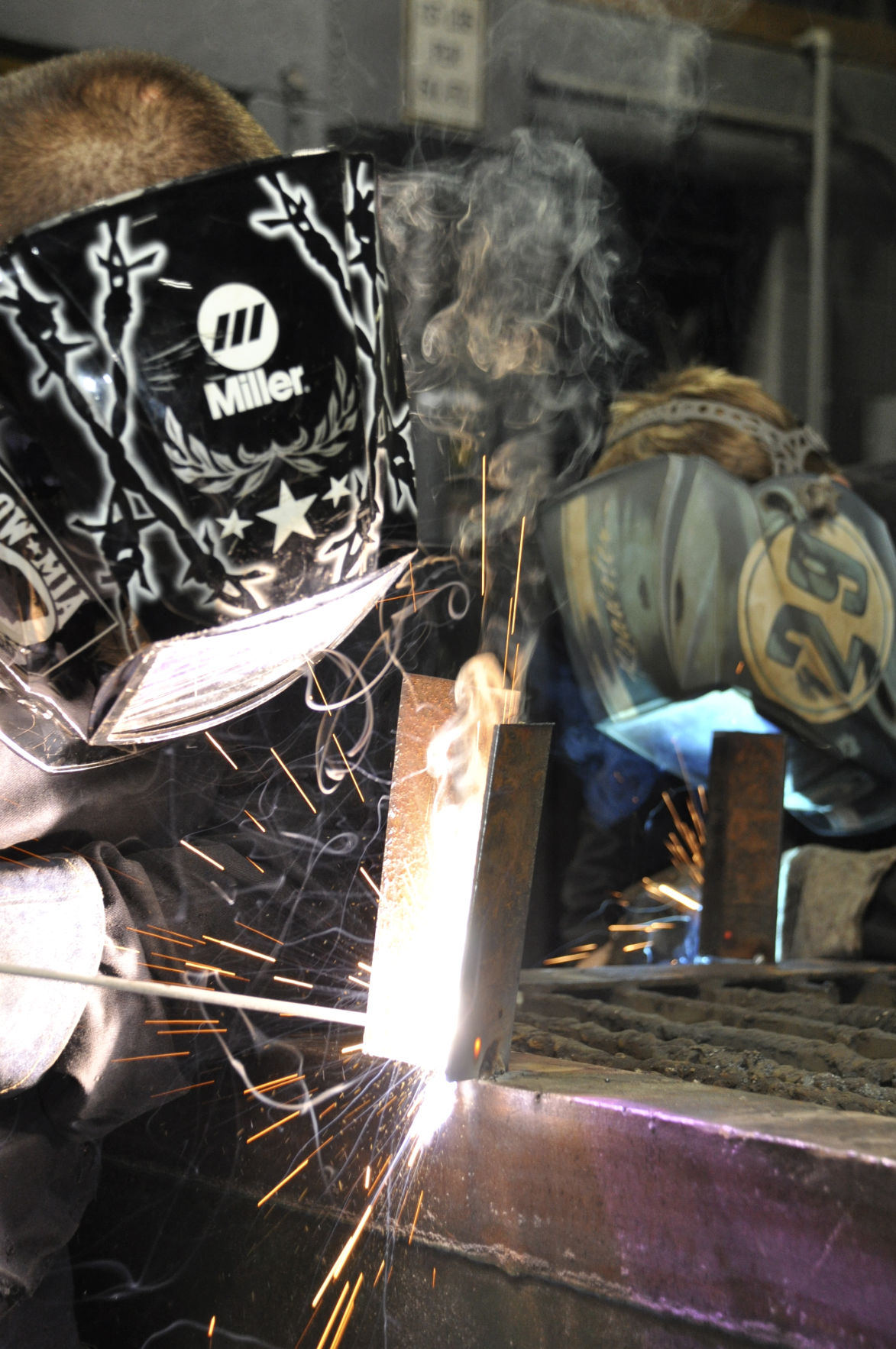 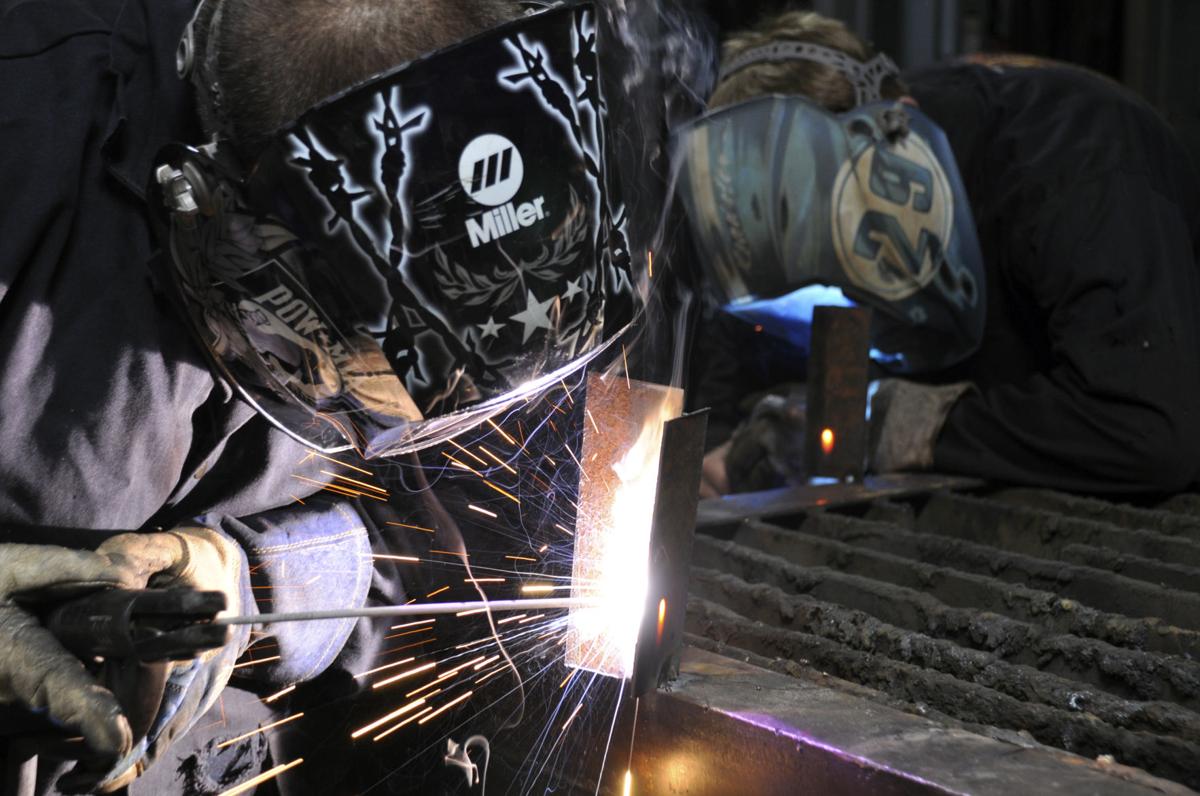 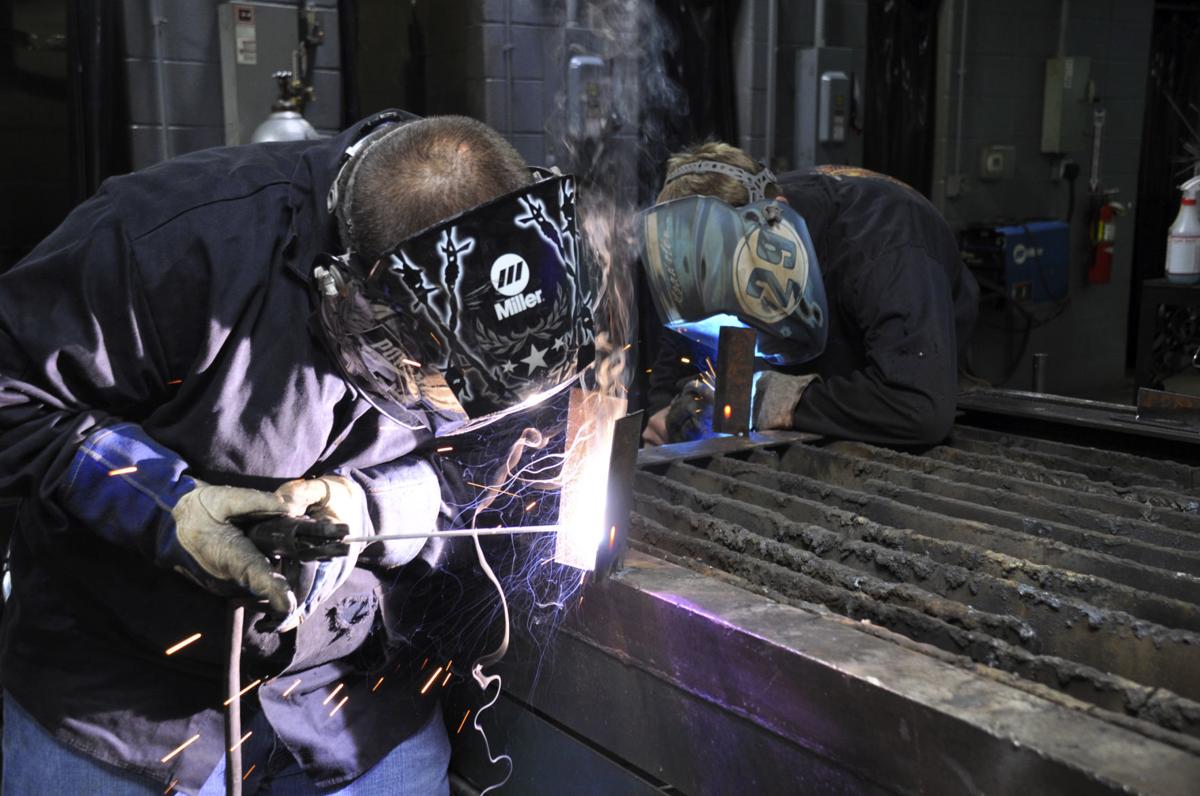 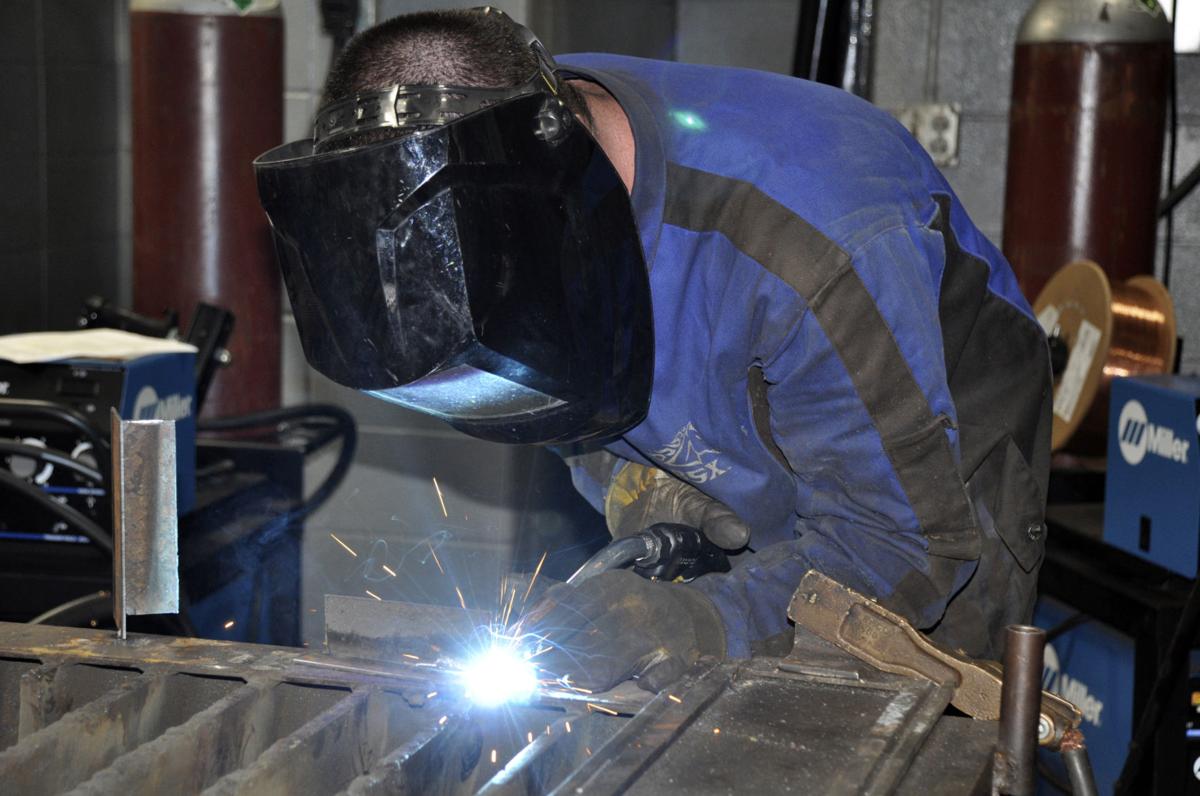 RICHMOND — Even though school is out for summer and they have already received their diploma and handshake that signal the end of high school, three graduates continue to show up each day at Kentucky Tech-Madison County Area Technology Center.

While most of its hallways and classrooms were dark and empty, the center's welding lab on Tuesday afternoon was alive with sparks, smoke and noise as three young men hustled to and fro with helmets on and heads down.

Their schooling days may be behind them, but Korey Cohran, G.T. Embry and Kimball Foley aren't practicing their welding techniques for any class project.

They are working towards a national championship.

The young men recently bested 14 other high school welding teams in the SkillsUSA state championships in the category of fabrication, taking home a win for their clean fabrication of a cargo carrier.

According to Embry, the team was not informed ahead of the competition what they would be fabricating and just had four hours to transform a heap of metal into something useful.

"There's no stopping once you start," Foley said of the stress of competitions. "You just get to it and get to work."

For nationals, Cochran said the team would have just six and a half hours to construct a welding and cutting table.

Even with a heads up on what they are supposed to fabricate, Cochran said the six-hour stretch of competition time will test the team's endurance.

"It's definitely going to be different," he said. "I think we will do fine though. That's why we are practicing everyday."

Even while working summer jobs as welders, the trio commit their evenings to practicing their welds and fabricating the table they designed with help from their fellow Madison County ATC students studying CAD design.

Now, they just have less than two weeks to prepare for nationals, which will be held in Louisville June 19-20.

Tim Pinson, welding instructor for Kentucky Tech-Madison County ATC, said the dedication of the young men to their work and the competition is admirable.

"They are done with school," Pinson said. "They don't have to be here. They won state and that was great and we are proud of them, but they are committed to trying to win nationals. They are here everyday and I think that speaks to their character, work ethic and how much this means to them."

The three young men weren't always so enthusiastic about competing in SkillsUSA.

"He twisted our arms," Cochran said with a grin as he recalled how Pinson approached each of the three to be part of a welding team.

"I knew they were talented and would work hard," Pinson said. "I kindly nudged them towards the competition at first."

Foley said the three guys were strangers at first, but as time went on, they grew into a team and close friends.

"The only thing we had in common was the welding class, at first," Foley said. "Then we became closer once we started working together."

"I don't think we would've known each other otherwise," Embry acknowledged.

Pinson said, as students, the three young men would often talk about ideas for the competition over breakfast at Cracker Barrel each morning before school.

That camaraderie helps in competition, the three men said Tuesday, as each team member has to pull their weight.

"We all do a little bit of everything in the competitions," Embry said.

"We have to trust each other that everything is being measured and cut right," Foley added.

Precision, they said, is especially important in welding.

"It's not something you can just watch a video and do. You can't really learn to do it in a classroom. Welding is something you have to learn by doing it over and over. You have to practice to be a decent welder," Cochran explained.

Which is why the team is practicing every day before nationals.

According to Pinson, the team will build and then rebuild their table according to their blueprints at least three times.

To complicate matters, the team is also required to show judges their skills by including specific welds on their finished table.

The team has been brushing up on those welds this week, Pinson said.

"They like their work to look pretty," Pinson said. "They don't want to present a sloppy weld to the judges so they are practicing."

As the young men moved about the lab Tuesday, they spoke about their love of the craft.

"It's something you have got to want to do," Embry said of welding. "It isn't for everyone. It's dirty and hot and can be difficult."

However, all three men agree that learning the trade has brought them many opportunities and are grateful for the training they received at ATC.

"I'm glad I won't be paying student loan debt off until I'm 45," said Cochran, who landed a full-time job right after graduation. "Welding gave me a pathway to a good career."

Both Embry and Foley also have full-time work lined up as soon as they are done with nationals.

"Like Korey said, we don't have to worry about student loans. The skills we learned here have already paid off for us in a way," Foley said.

Pinson said, they young men will be able to pursue more extensive training through their employers.

For winning the state competition, the three young men were also awarded each a $5,000 scholarship to further pursue their education in welding.

The team said they are excited to face the stiff competition at nationals and are confident in their design.

"I think we stand a good chance because we are willing to work for it and are putting the time in," Cochran said. "I think that makes all the difference."

For now, the team will continue to squeeze time in from their work schedules to devote to their project — hoping their efforts will yield a somewhat different kind of fabricated metal — a national championship trophy.