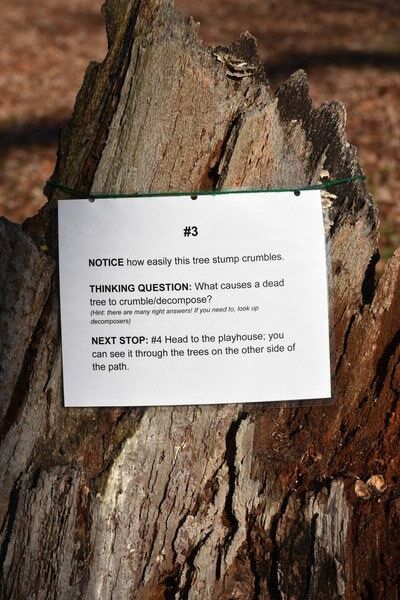 One of the signs along the Thinking Trail at the base of the trail head at the Pinnacles. 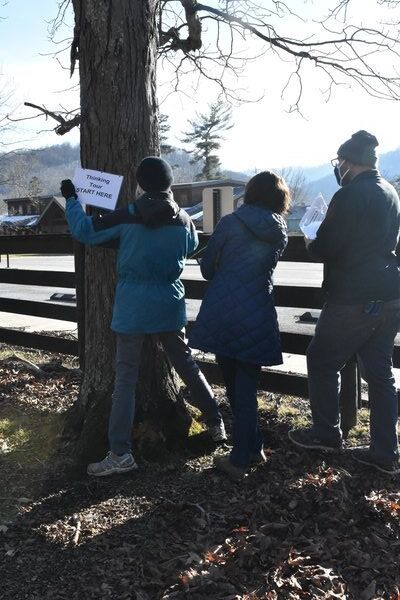 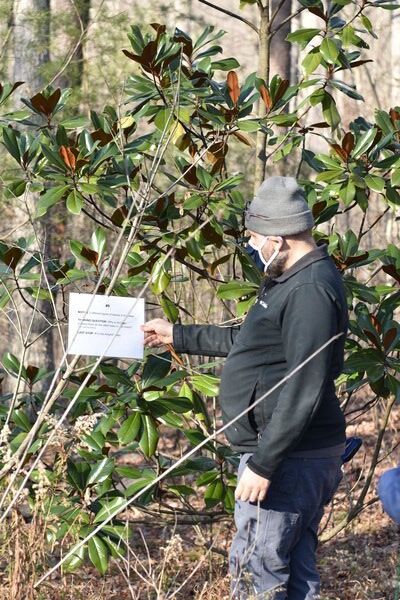 John Abrams hangs a sign on a Magnolia Tree, which had been planted as a memorial for a dog who used to hike with people in the Pinnacles. 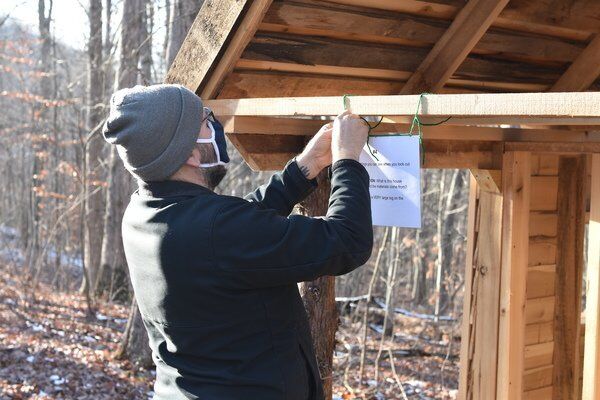 Photos by Destinee Ott / The Register

John Abrams hangs a sign for a stopping point along the Thinking Trail.

One of the signs along the Thinking Trail at the base of the trail head at the Pinnacles.

John Abrams hangs a sign on a Magnolia Tree, which had been planted as a memorial for a dog who used to hike with people in the Pinnacles.

Photos by Destinee Ott / The Register

John Abrams hangs a sign for a stopping point along the Thinking Trail.

BEREA — While the winter chill may seem like a reason to stay indoors, the Berea College Forestry Outreach Center is hoping to get families and individuals out and about this holiday season through a new interactive walk at the Pinnacles.

Creators said Thinking Trail combines mental and physical exercise which lead hikers up to the trail head of the main Pinnacles path.

Wendy Warren, director of the Berea College Forestry Outreach Center, said the new trail will have laminated signs at designated points which contain an interesting fact or point of interest about the area in addition to a question to get visitors thinking.

A clue is also included on the signs which leads visitors to the next stop.

One sign on Thinking Trail asks visitors to notice how easily a tree stump crumbles. The thinking question expounds on the topic by asking participants to think about what causes a dead tree to crumble or decompose.

"Too many people go through the world without noticing what's around them," John Abrams, a naturalist and researcher, said about the signs installed along the path.

Warren said the Thinking Trail is a great way to get families outdoors with an engaging activity during the winter months.

Though the trail is at the Pinnacles, Warren said it is not just for people who hike.

"The benefits of being outdoors is the same whether you are hiking or not," Warren said.

Warren said the trail is designed to be enjoyed by all visitors, even if they don't like to hike. The trail will offer the same mental and physical health benefits from being outdoors.

"If this gets people out who don't hike, perfect," Warren added.

However, Roberts said it is important to get outdoors even when the temperatures dip, which is why the outreach center is trying to encourage families to get outside when they don't have anything else to do during the holidays.

"We hope that while they're at each spot they're noticing a lot more than what's on the paper," Warren said. "(We hope it) gets them looking at things with new eyes. Things that maybe they've looked at before."

Warren said the Thinking Trail was an offshoot from a previous activity hosted by the center.

In October, the center held a scavenger hunt for Tree Week, which was a great success, and the center thought about doing another one for December.

However, as they started planning the questions, the center decided it wasn't quite a scavenger hunt.

Thus, the Thinking Trail was born.

The center was determined to host another outdoor activity for visitors as they were not having much success with their online programs, Roberts explained.

The environmental educator said she believes this is because children had already been online all day with Zoom classes and were fatigued.

Warren said the center used to work with after-school groups quite a bit, but now with COVID-19 restrictions they are unable to do so.

"We're an outreach center, and we're closed, so we're really having to imagine what outreach means and what it looks like," Warren said.