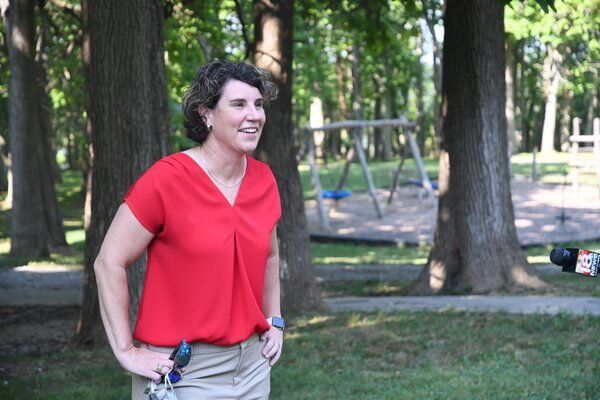 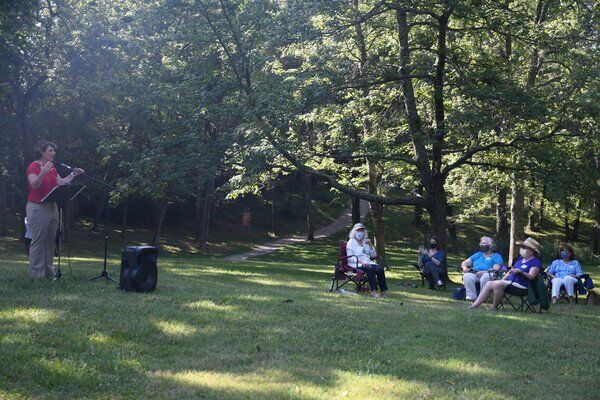 Amy McGrath talks to the Madison County Women's Democratic Club Monday morning as members social distance from each other. 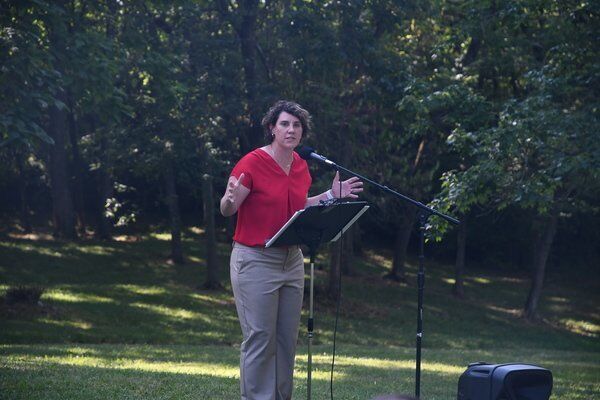 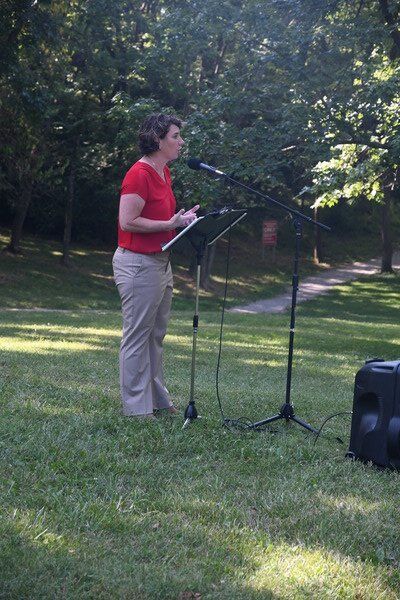 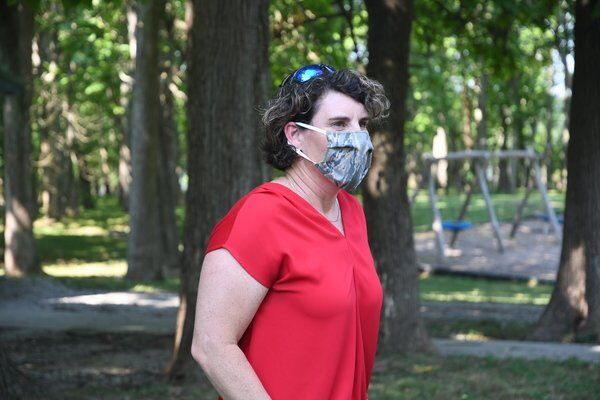 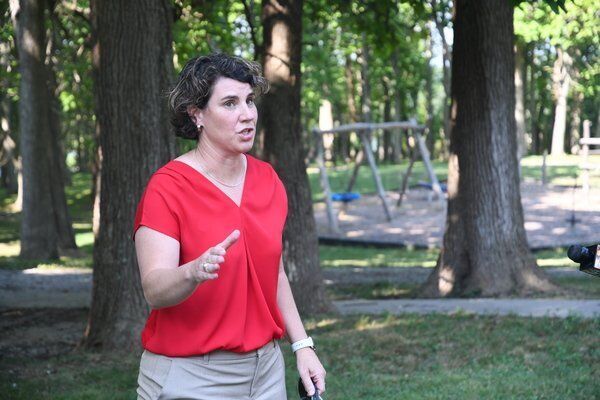 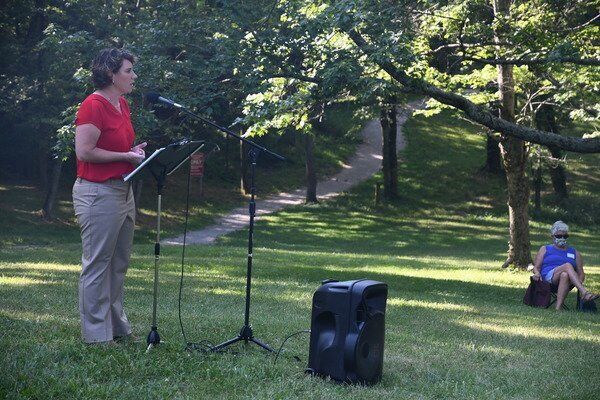 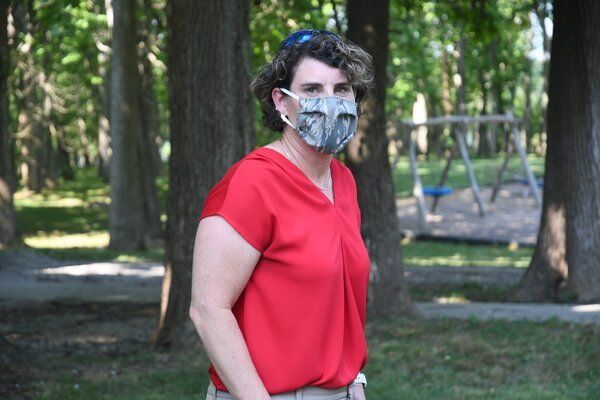 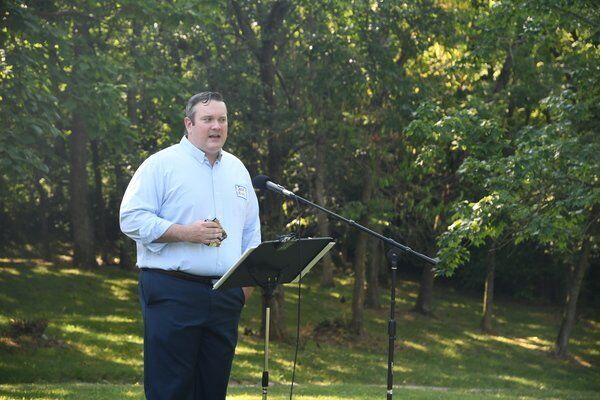 Amy McGrath talks to the Madison County Women's Democratic Club Monday morning as members social distance from each other.

Amy McGrath on Monday told the Madison County Democratic Women’s Club that national politics is a swamp, and it was built by Senate Majority Leader Mitch McConnell.

"I'll just remind you that he's a man who has broken the Senate. What was once the most deliberative body in our country, he has destroyed it, and it's so important right now, because we are literally in crisis in our country," McGrath, who is running against McConnell on the Nov. 3 ballot, said.

She said he hasn't done anything to benefit things such as health care, racial justice or creating good quality jobs for people.

"All these things that we need, and we know we need to work on, he hasn't done anything on," she explained as she addressed the club in Richmond Monday.

She said instead of focusing on helping people with the coronavirus, he's just the "same old Mitch."

"If you look at the fact that he has the highest levels of intelligence of any member of Congress, and when was the first time he even said a word about the potential of a pandemic? I'll tell you when. It wasn't until the stock market crash. Think about that: Same old Mitch," McGrath said.

She called him a colossal failure of leadership.

"And then as we move on to the fact that we have to have a federal government that helps people, OK, and that's what they did in the CARES Act, or what they tried to do, he was the champion of what? … The champion of, 'Hey let the state and local governments go bankrupt.' … Firefighters, police officers, people who worked for pension their whole life as public servants, you all just ought to go bankrupt, according to (him) … and at the same time, championing what? $500 billion slush funds for corporations and Wall Street," she said.

McGrath said people like McConnell are who former Secretary of Defense Robert Gates warned everyone about during his final testimony in 2011.

She was assigned to work with then House Rep. Susan Davis of San Diego, California, as a Congressional Fellow with the Marine Corps, and she spent the night prior to his final testimony preparing questions for Davis to ask him.

"I'm thinking about, well what policy questions should I ask (the) secretary of defense, and the thing that stood out was I really wanted to ask him a very basic question: 'What keeps you up at night? What do you worry about? You're the secretary of defense, you see lots of different things, we're in a war in Afghanistan, which I just came from, but what keeps you up at night?'" McGrath said.

It was the only question Davis asked Gates during his testimony.

McGrath explained he was talking about threats such as a biological pandemic and climate change, which are issues she said members of Congress couldn't even think about.

She said Gates was also referring to "the general inability for our democracy to work, and folks, it does come down to this: It is a swamp, OK, and Mitch McConnell built it. He is the architect of having a government that is dysfunctional, and how are we doing right now?"

Instead, she said the country needs to come together, and the United States needs national bills to focus on other things that "prioritize taking care of this pandemic."

"… We don't have a national testing and tracing plan, that's something that we needed back in March and April," McGrath said. "We need resources for it. I think that's vital. We need to have resources for state and local governments. The state of Kentucky has a, I think it's almost $500 million shortfall for this year, perhaps a billion dollars for next year. We need help, and it's unacceptable to just dole out billions, $500 billion to corporations, to bail out Wall Street, and then turn around and say the state and local governments — parks, schools, firefighters, teachers, social workers, the very fabric of our society, just, 'Well, you ought to go bankrupt."

She stressed the federal government can run up a deficit, whereas state governments can't, and that's what needs to happen in order prevent the economy from crashing.

She also said the country needs to take care of regular people.

"As you know, the aid to help folks who are unemployed right now ends at the end of July, we need to extend that," she said. "We need to help people so that they can pay the rent. … I think that's really important. Throughout this pandemic, we need to get through this together, and the federal government has a large role in that."

She added that it's "unfortunate that the attorney general (Daniel Cameron) is spending time suing the governor when he's trying to keep Kentucky safe."

"I think our governor has done a really good job. I mean, look at the states surrounding us," she said. "In my mind, as the attorney general, that's not something that he should be focused on in the middle of a pandemic. He should be focused on helping keep Kentuckians safe. … Come on guys, what are we doing here?

"Let's just all wear a mask and get (through) this pandemic and do what public health officials say we should be doing," she added.

In order to beat McConnell and make changes at the federal level, McGrath said we all need to come together.

"To defeat Mitch McConnell, it's not going to be Amy McGrath doing it, it's going to be all of us. It's going to be all of Kentucky: Democrats, Independents and Republicans coming together and saying, 'We need better leaders,'" she said. "And look, here's my final thought: 140,000 Americans have died due to coronavirus. … That's twice the number of the Vietnam War, and this has happened in four or five months. That on top of an economy that is in shambles, 40% of Kentuckians have in some way, shape or form in the last three or four months applied for unemployment, this is devastating.

"Anybody who says, 'Oh we have to keep the same leaders' after all that, I mean, we got to wake up. We should not be keeping the same leaders that literally allowed this to happen … ."