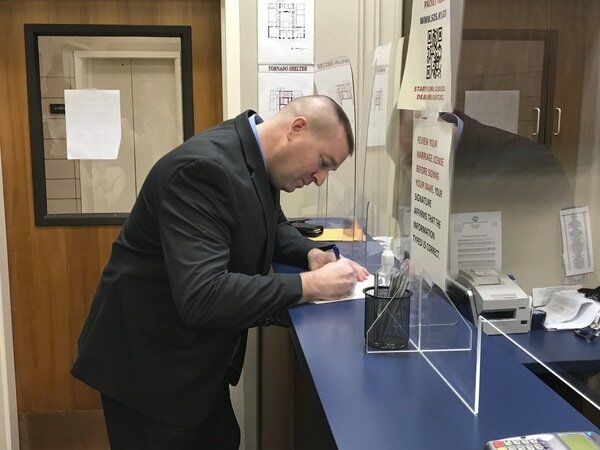 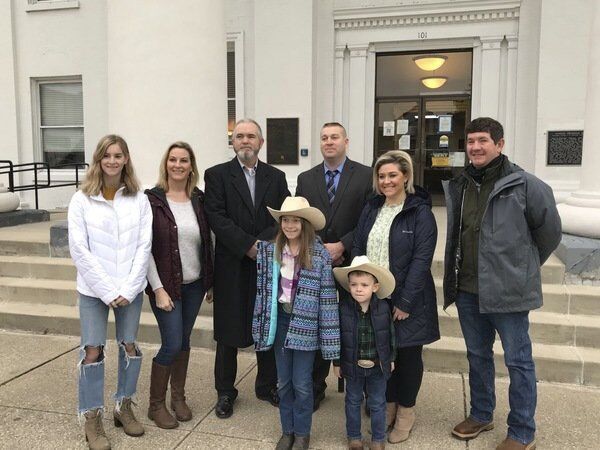 (From left to right in the second row) Laney O'Donnell and Will O'Donnell.

(From left to right in the second row) Laney O'Donnell and Will O'Donnell.

O'Donnell is a 19 year veteran of the Richmond Police Department. He was joined by a group of family and friends at the Madison County Courthouse Thursday morning as he began his campaign officially submitting his documents. Longtime friends Danny Castle and Joshua Long served as witnesses for his signing.

O'Donnell gave a statement to the Register about his decision to run for office.

"I came here this morning to file as candidate for Madison County Sheriff. I've been excited to enter the race for over a year now. I'm looking forward to hearing topics and concerns to people of the county," he began.

He stated Madison County, in his opinion, is one of the best places to live. During his work here in law enforcement he said he has witnessed the sincerity and "awesomeness of the people" of this community.

"I truly mean that. It's amazing the support we get for law enforcement here by the people of Madison County. That's one of the reasons I've decided to enter the election and this race in particular. I enjoy serving people and I'm looking forward to giving back more to the community that I live. I think that's important," O'Donnell said.

The current assistant chief of police said there is no dispute that the county is seeing a huge rise in crime. Not only in the state and county, but the nation as a whole. This is something he hopes to address.

"The FBI reports that the 2020 saw a 30% rise in murder rates. Having that is a huge issue, O'Donnell said. "We've seen it here locally, but it's not just the murders. It's a variety of other crimes that we see here in the county. And those are the ones that largely impact us. As we move in the next few months I plan on submitting a number of ideas on how we can improve our fight against crime and increase our response in public safety," he added.

The RPD's assistant police chief has been on the force long enough to retire. He praised the leadership of the department and said that his experience there has been a wonderful one. However, O'Donnell said he is not ready to end his career in law enforcement – feeling that he has more to give to the community and also just enjoying the life of a public servant. He made the decision to run over a year ago.

Retired Kentucky State Police Trooper Danny Castle – one of O'Donnell's two witnesses to his signing – said that he has known the law enforcement official his entire life.

"I've known B.J. (O'Donnell) my entire life. I'm here to show support of his goal of being the Madison County Sheriff. I'm here to support him any way that I can. I worked with his father in the state police. I've known him since he was knee high. He's a good man and he's doing a good job as a policeman. He loves what he does," Castle said.

O'Donnell said he has nothing but respect for his competitor in the race, Sheriff Mike Coyle. He reflected on a long career collaborating with the current sheriff.

"I've known Mike (Coyle) pretty much my entire life. I have nothing bad to say about him. He's been good with me. We have worked together with my work at the police department and him at the Sheriff's Department. I have no issues with Mike. I just think I can progress the department more," O'Donnell said. "We should never be satisfied with how we're doing performance wise. We should always be looking at rooms and ways to improve in our departments and our communities. I think I bring that to the table as I enter into the race and hopefully enter into the office."