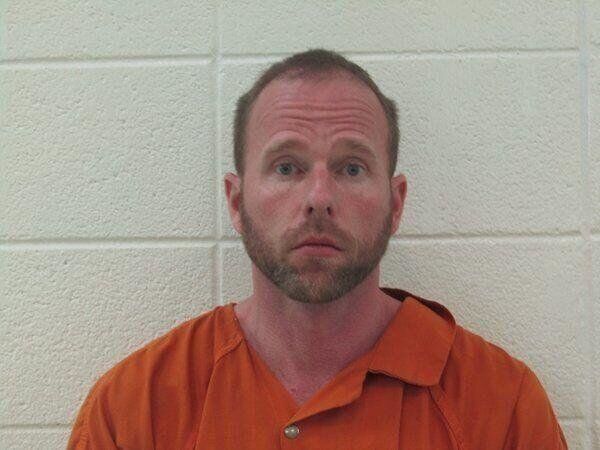 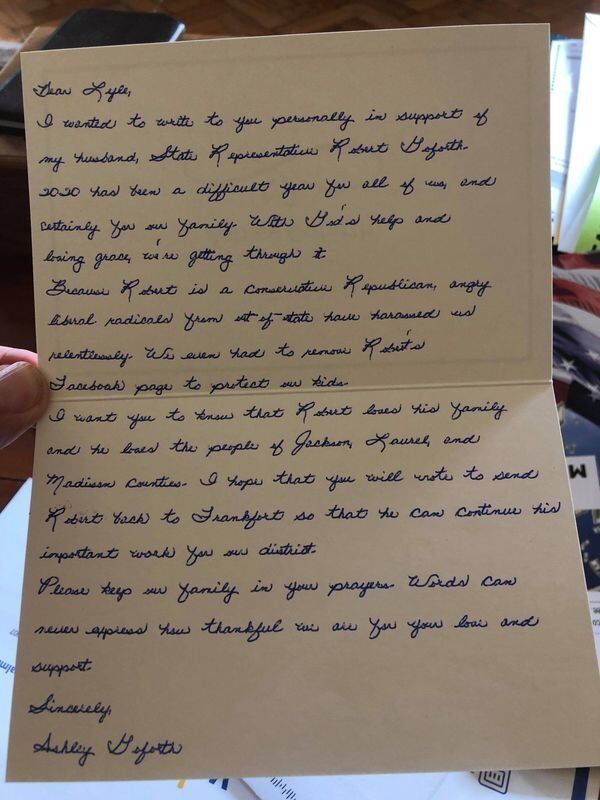 A letter from Rep. Robert Goforth's wife, Ashley, endorsing him for re-election.

A letter from Rep. Robert Goforth's wife, Ashley, endorsing him for re-election.

When Berea resident Becca Parrish read a letter she received in her mail last week, she felt a slew of emotions ranging from sadness, disgust, and concern.

In her mailbox was a mass-produced letter, written in auto-penned cursive, from Ashley Goforth, wife of Rep. Robert S. Goforth (R-KY) of the 89th District, who was indicted on charges for her abuse.

Goforth, who represents a small portion of Berea and Madison County, was indicted in September on strangulation and assault charges stemming from an incident which took place in April 2020 at his home. Goforth is attempting to stave off a challenge from Berea Democrat Mike VanWinkle in the Nov. 3 General Election and hold onto his seat in Frankfort.

“My concern really is that I feel like if someone had a domestic violence situation and was really truly concerned with their family, their focus would be on getting anger management and therapy and trying to make sure their family was in a good place,” she stated. “It feels like to me, the focus is trying to get re-elected.”

According to police citations, Goforth threatened the victim, his wife, and choked her with an ethernet cable until she nearly passed out.

But in the letter that some voters received from Ashley Goforth, she asked for residents’ support of her husband, and noted that 2020 was a hard year for all families — as well as her own.

“2020 has been a difficult year for all of us, and certainly for our family,” she wrote. “With God’s help and loving grace, we’re getting through it.”

She then stated in the letter that because her husband was a conservative Republican, “angry liberal radicals from out-of-state have harassed us relentlessly.”

“I want you to know that Robert loves his family and he loves the people of Jackson, Laurel, and Madison Counties. I hope that you will vote to send Robert back to Frankfort so that he can continue important work for the district,” she penned. “Please keep my family in your prayers…”

But from Parrish’s perspective, this tactic just seemed like further emotional abuse.

“You abused your spouse and now you ask her to tell other people that things are okay and good so you can get elected... it feels like an awfully bad situation,” she said.

Another Berea resident, Rebecca Blankenship, said while she did not receive her own copy of the letter, she read her neighbor’s and called it “despicable.”

“I think it is despicable that he would ask her to make herself vulnerable and stand up for his re-election after he treated her that way,” Blankenship said. “He should resign. The people of eastern Kentucky know what it is to be a good husband and father and he is neither.”

Blankenship is a part of a group, Kentucky for Strong Families, which she explains supports local candidates based on their family values.

“Our goal is to educate people about the type of crimes that he is accused of,” Blankenship said. “My main goal is not to make a Democrat win, I don't care about that. I care that people vote with their conscience and and are educated about what he has done...We do not want a wife-beater representing us in Frankfort.”

The endorsement letter from Ashley Goforth is not the first time she has spoken out since her husband’s charges.

Weeks following his September indictment, Goforth’s wife claimed both she and the representatives “regret” the incident which occurred in April, and she did not want to pursue charges.

“We were reconciled within days after it happened, and we have lived together at our home with our children since that time," Ashley Goforth said in a statement emailed to the media. "It was my strong desire that my husband not be charged with any offenses, and I formally communicated that to the Commonwealth’s Attorney and grand jury in Laurel County.

"Robert is a loving husband and father who goes above and beyond for his family. We have both sought spiritual and family counseling as we continue to work on our personal issues as a married couple," Ashley Goforth said in the statement. "It has been a difficult year, but we are thankful for the grace and compassion of a loving God. It has sustained us."

And no matter the circumstances, it is always heartbreaking.

Lainhart described battered women’s syndrome as the abuser being powerful, while the victim is not.

“An abuser can act like they know everything and the victim is probably intimidated,” she stated. “A victim can also probably idealize their abuser when things are calm in their relationship because of [the abuser's] position in the community.”

At press deadline, e-mails seeking comment from Goforth have not been returned.