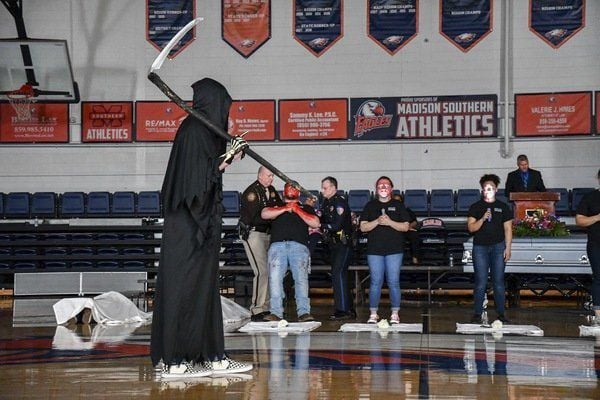 Madison County Deputy Michael Stotts and Berea Police Officer Jake Reed lay a student to rest after being picked my the Grim Reaper on Thursday. 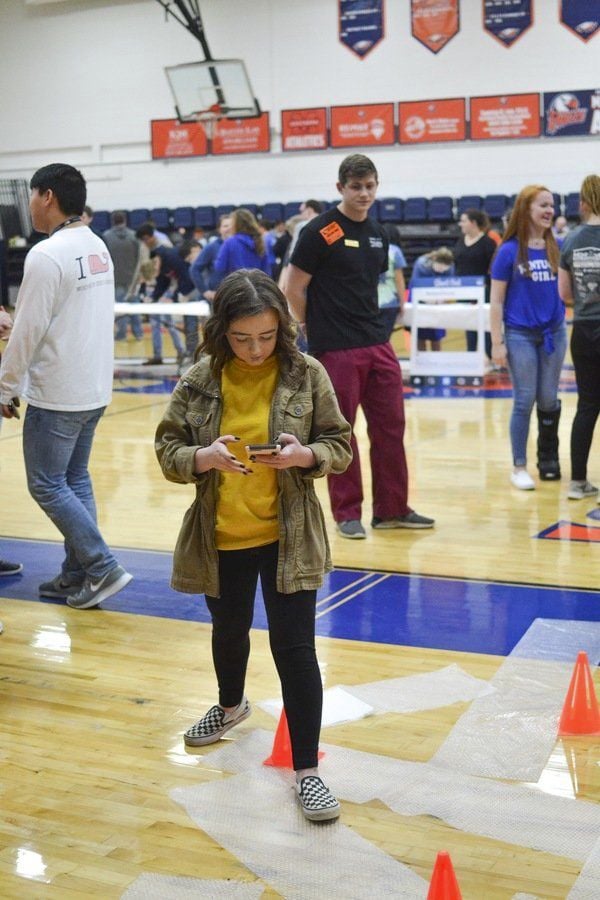 Kenzie Walters tries to text while avoiding the bubble wrap, which is meant to represent the rubble strip along a road. 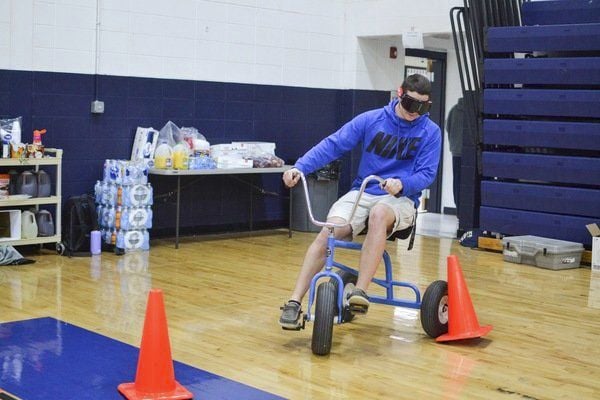 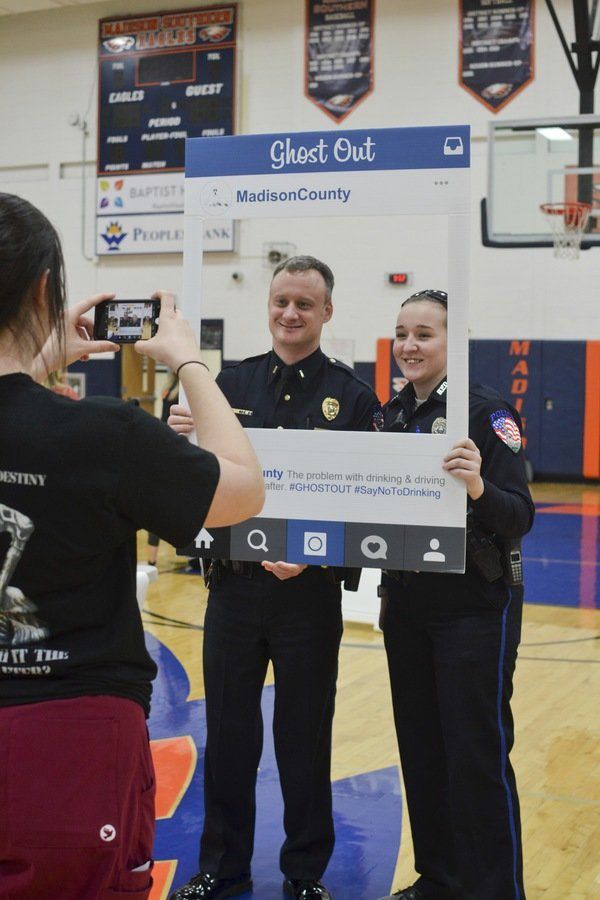 Jake Reed, Berea Police Officer, poses with a fellow officer during the Ghost Out event. 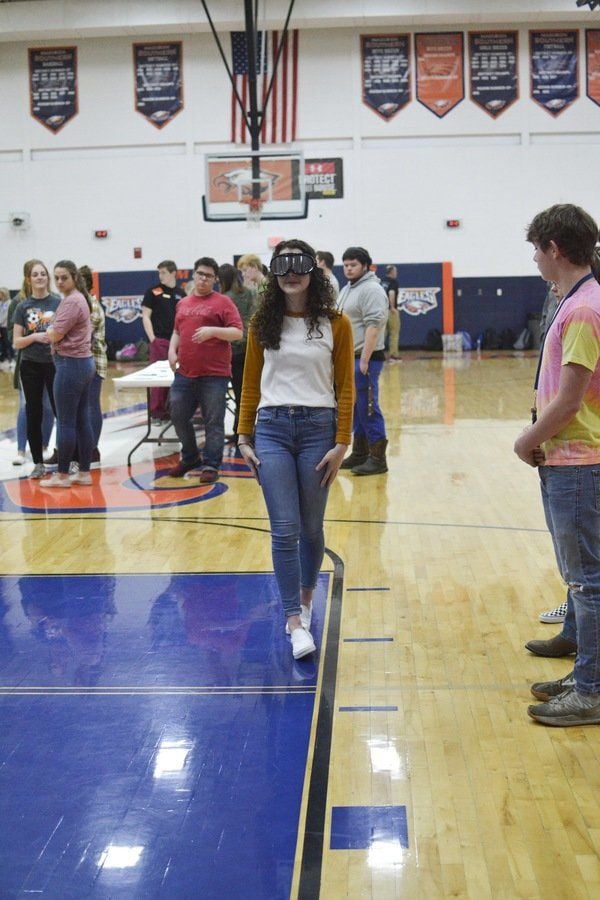 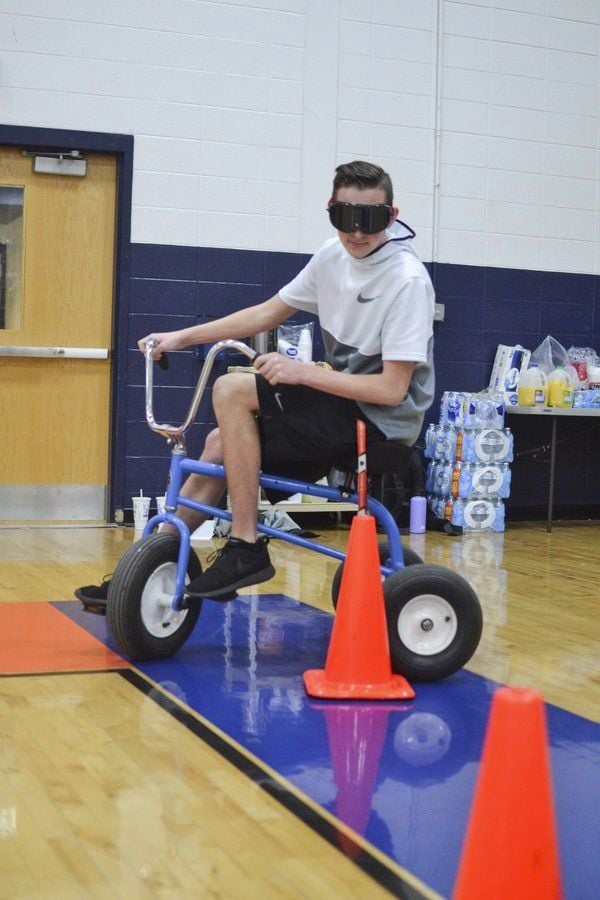 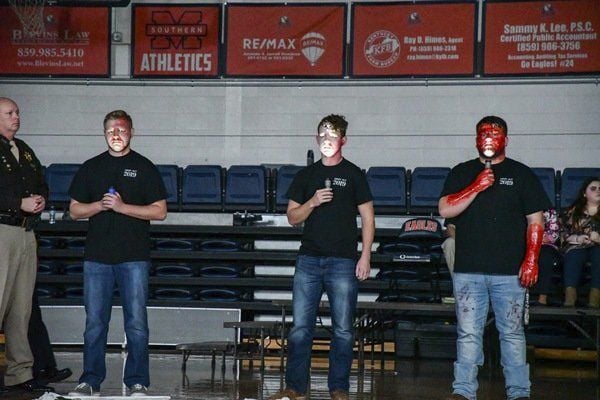 Madison County Deputy Michael Stotts and Berea Police Officer Jake Reed lay a student to rest after being picked my the Grim Reaper on Thursday.

Kenzie Walters tries to text while avoiding the bubble wrap, which is meant to represent the rubble strip along a road.

Jake Reed, Berea Police Officer, poses with a fellow officer during the Ghost Out event.

The Grim Reaper made his rounds Thursday at Madison Southern High School, taking a victim every 30 minutes. In total, eight victims were "taken" from their activities.

It was a reminder to students and staff that every 30 minutes in the United States someone is killed in an impaired driving collision.

And the reminders didn’t end there.

The Southern students participated in activities all day Thursday, which concluded with special guest speakers who shared their experiences with students about their first-hand accounts of drunk or impaired driving.

For Thursday’s program, students gathered in the gym where they participated in activities such as wearing impaired simulation goggles, also known as drunk googles, and maneuvering a tricycle. Other activities included wearing drunk goggles and operating remote control car through an obstacle course, a station where the students were on their phones and had to avoid stepping on bubble wrap, which symbolized rumble strips on the road.

Among the guest speakers at the assembly were Berea Police Officer Jake Reed, Madison County Coroner Jimmy Cornelison, and Theresa Martinez, a volunteer for Mother's Against Drunk Driving, who was emotional recalling her experience with a drunk driver who claimed the life of her 23-year-old daughter, Ashley.

Martinez recalled the memories of Ashley, who was a bright and warm individual. She died on April 29, 2012, because of a drunk driver who hit her head on, snapping her brain stem. The man walked away with only a broken leg.

Martinez took students on an emotional rollercoaster as she recalled the night the coroner came to her house, placing Ashely’s ring and necklace in her hand, and the moment she saw her body lying in the morgue.

“Mom’s are always supposed to make things right, but that was one thing I couldn’t make right,” Martinez said tearfully.

The driver who took Ashely’s life was living in Kentucky illegally, did not have a driver’s license, registration or insurance. He was also found to have cocaine in his system, as well as being intoxicated, Martinez said.

She remembers the first day in court where she came face-to-face with the man who killed her daughter, and to now, where she told them how she lives everyday with the loss of Ashley, with only her memories and a voicemail to remember her by.

“I hope that, after today, they will make the right choices to not drink and drive because of the impact it leaves their loved ones when they are no longer here,” Martinez said.

With vehicular crashes being a leading cause of teen mortality and morbidity, a significant number of these crashes are the result of an impaired driver. Many of these accidents can be avoided, it's just about making the right decisions, speakers said.

Cornelison told students the process he has to go through when he is called to the scene of an accident. He said he finds out about the joint left in your back pocket and how much alcohol one consumed, but most importantly, he told the students about the painful job he has of telling a family their loved one has died.

In Reed's 15 years of policing, he told students he has seen some awful things, including young people who have been killed by drunk drivers. Reed recounted a story about a young boy driving to church, when he was hit and killed by a drunk driver, something that could have been avoided if the man hadn't decided to get behind the wheel that morning.

"The most selfish thing you can do is drink and drive," Reed said to students. "Please make good decisions, make smart decisions."

The event concluded as Madison County Sheriff's Deputy Michael Stotts and Reed helped perform a mock funeral of the eight students that had been taken by the Grim Reaper earlier in the day, with Pastor Achee Eades giving each student's eulogy. When they got to the last student, he proclaimed, "NOT ME!" and made a phone call to get picked up, instead of driving impaired and ending up like his fellow classmates.