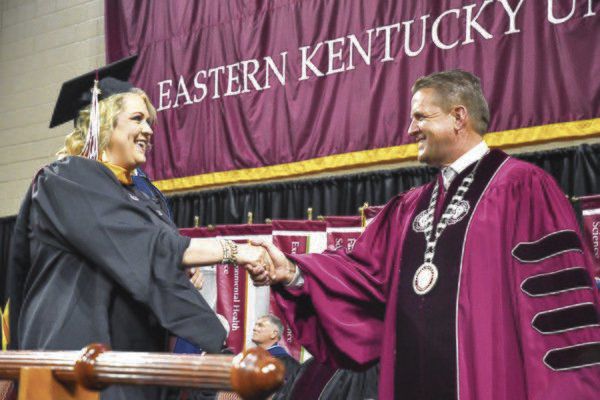 Katy Marcum shakes hands with Eastern Kentucky University President Michael Benson after receiving her diploma during a May 2019 commencement ceremony. 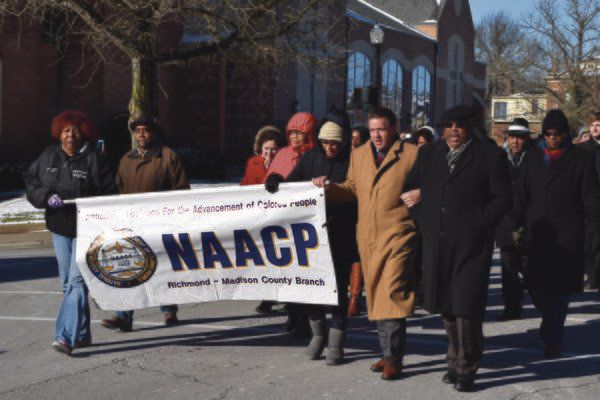 After Richmond's annual Unity Breakfast in 2019, many attendees took part in a march through downtown to commemorate the many marches Dr. Martin Luther King Jr. led to advance civil rights. Michael Benson walks next to Richmond Mayor Robert Blythe. 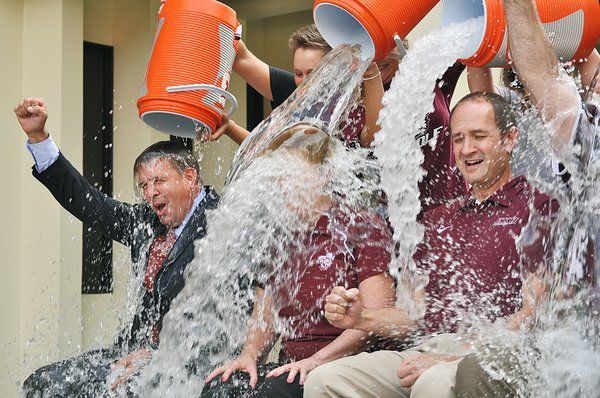 Eastern Kentucky University President Michael Benson and members of the President's Council are doused in ice water in August 2018 in response to the ALS Ice Bucket Challenge. 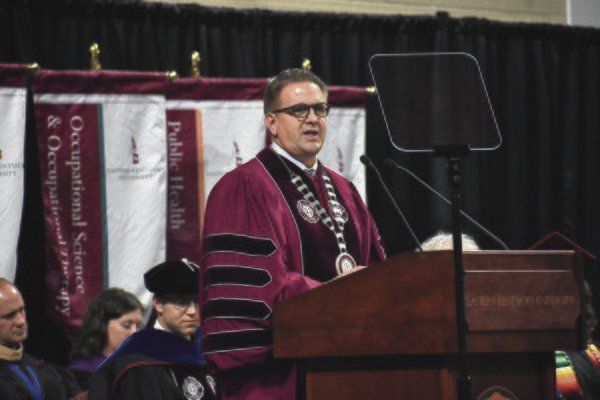 Michael Benson addresses the graduates for one of his last commencement speeches as EKU's president in December.

Katy Marcum shakes hands with Eastern Kentucky University President Michael Benson after receiving her diploma during a May 2019 commencement ceremony.

After Richmond's annual Unity Breakfast in 2019, many attendees took part in a march through downtown to commemorate the many marches Dr. Martin Luther King Jr. led to advance civil rights. Michael Benson walks next to Richmond Mayor Robert Blythe.

Eastern Kentucky University President Michael Benson and members of the President's Council are doused in ice water in August 2018 in response to the ALS Ice Bucket Challenge.

Michael Benson addresses the graduates for one of his last commencement speeches as EKU's president in December.

After his resignation as President of Eastern Kentucky University, President Emeritus Michael Benson has found himself in, what he calls "the heart of campus," Eastern's library. Benson is staying on campus in order to help to with the transition to a new president as well as continuing to write his book focusing on Daniel Coit Gilman.

When asked about a few of his favorite memories of EKU, Benson said he came to Eastern sight unseen in February of 2013. The day was dark with low clouds in the sky but he called his wife, who was on a cruise, and told her they should look into moving to Richmond. She had never been to Richmond before, but Benson had grown up in the south and was used to the pace of life and the mannerisms here. He recalled, when his family initially visited Richmond, it was in a driving rainstorm.

"Everywhere we went that day it rained," Benson told The Register in a recent interview.

That was on a Sunday and he remembered the following Monday it snowed and, by the time they left, the weather was nice. He chalked this up to getting prepared for the Kentucky weather that "can change as rapidly as anything." The weather might have been as crazy as ever when he and his family first visited Richmond for his interview at EKU, but Benson said he most remembered the people here were incredibly warm.

One of his first memorable experiences as president was when Charles Hay, who was an archivist at EKU at the time, came to him about how he felt that Mary Roark had suffered a great injustice. Mary Roark "served ably" from 1909 to 1910 after her husband and first EKU president, Ruric Nevel Roark, passed away but the board had never removed the tag of interim to her title, said Benson. Hay's take on the story was corroborated by Damir Siahkoohi, a senior at the time who was doing his honor's thesis on Mary Roark, and so Benson took the issue to the board. Benson explained that taking the interim tag from her title would make Mary Roark EKU's first female president, ten years before she had the right to vote.

"I was proud of the fact that everyone worked together to right a wrong," Benson said.

Benson also remembered the first drive he made around the entirety of Eastern's campus. He said the bones of the campus were solid but he realized that it needed a refresh. Benson, ever ready to quote figures from the past, quoted Winston Churchill in saying "We shape our buildings and thereafter they shape us." And that was the beginning of Benson's Make No Little Plans movement on campus.

Benson admits, if he had everything to do over again, he might choose to be an architect because of his love of buildings. He explained you design the buildings and then they "impact the environment." Benson wanted to revitalize EKU's campus to change the image and perception people had of it.

"I wanted people to see that we're not just a sleepy little university tucked away in Richmond," he said.

Benson wanted to show EKU could go head to head with other universities in Kentucky. He explained one of his jobs, as he saw it, was that if students hang their diplomas on their wall that, in two, five, 10 or more years, it means even more to them because EKU's reputation has improved. He said bolstering how employers, recruiters, graduate schools and others view the school is important. Benson called this, "improving the brand."

With these highlights, Benson understands there have also been challenges. He remembered back to the intense media coverage EKU received when they had to cut programs. Benson said they were still trying to recover from that, but he said higher education is going through changes and challenges everywhere right now.

Benson explained, when looking at the states that have made investments in public higher education, each are also the 10 best economies in terms of state economies. He said this shows a correlation between the investment the states make in higher education and their ability, as a state economy, to attract business, employers and more. He hopes EKU is beginning to turn this corner and trend positively.

Benson explained it is fun for him to be doing his scholarship work towards the latter part of his career when so many prefer to do it at the front of their careers. He said that the way he has chosen to do it has given him a new perspective.

Benson is still helping EKU with various things. One example he had was the trip that he will be taking to China in February with an EKU professor in the business school. They are visiting Chairman Chunbo Li, who has given the EKU honor's program a million dollars in gifts, and asking for another donation in order to further bolster the program.

Benson explained he has been asked to chime in on a few things and, if the school calls upon him, he will answer. But he also said that he plans to let them do their own thing and try and stay out of their way.

While assisting EKU, Benson is also working on his book which spotlights Daniel Coit Gilman, a man that he called "arguably one of the most important figures of higher education in the 19th century." Benson explained Gilman was the first president of Johns Hopkins University and the model that he put in place in 1876 had never been tried before.

Gilman's model for the school melded the German academic footprint, which focused on research, with the English model that put emphasis on the one-on-one relationship between a teacher and a student, Benson said. He explained, since then, every reputable facility, even schools such as EKU which is a teaching school but also has faculty doing cutting edge research, has tried to replicate Gilman's model. Benson said Harvard's own president has said it wasn't until Gilman's model that Harvard was spurred to "get with it."

"In the din of political discourse I worry that lost in all of the noise is the irreplaceable role of the university," Benson said.

He explained that universities not only provide a place where debates can happen with civil give and take, but they also give opportunities to many people who otherwise would not have them.

Benson, quoting Robert Baden-Powell this time, said "leave a place better than how you found it. I hope we've done that."