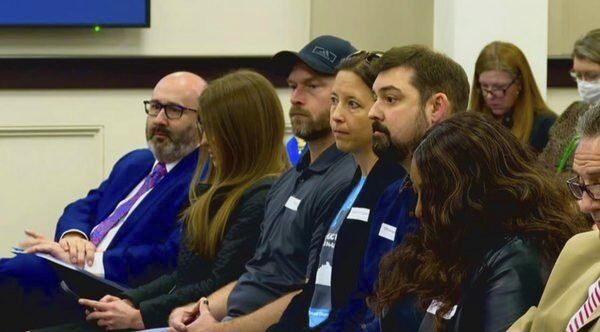 Members of #kyinsulin4all T1International sit together at the Capitol to show support for Alec's Law. 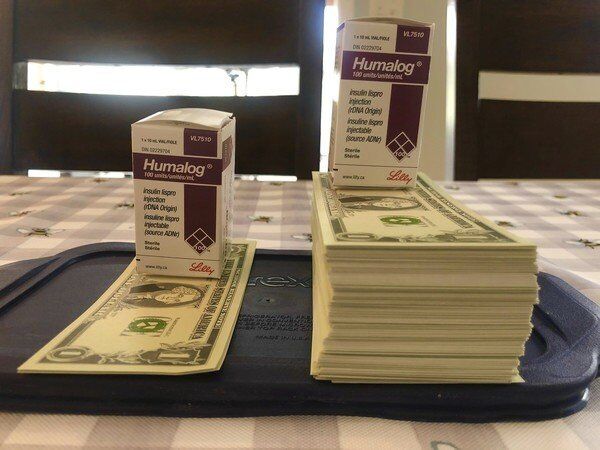 On the left is the $6 amount it costs to manufacture insulin. The right demonstrates the $300+ cost associated with purchasing insulin. 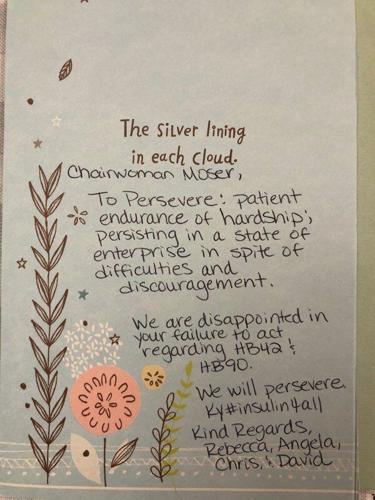 The photo of a card sent to Chairwoman Moser from Rebecca Kelly after Moser did not move Alec's Bill to be heard by the committee she chairs.

Members of #kyinsulin4all T1International sit together at the Capitol to show support for Alec's Law.

On the left is the $6 amount it costs to manufacture insulin. The right demonstrates the $300+ cost associated with purchasing insulin.

The photo of a card sent to Chairwoman Moser from Rebecca Kelly after Moser did not move Alec's Bill to be heard by the committee she chairs.

"To persevere: patient endurance of hardship; persisting in a state of enterprise in spite of difficulties and discouragement."

This is the quote that was included inside an "encouragement" card sent to State Representative Kimberly Moser right after she blocked two bills in the 2022 Legislative session which would have helped 474,456 Kentuckians living with diagnosed diabetes.

Many of those same individuals are struggling daily, to be able to afford their insulin. In fact, one-in-four individuals living with diabetes ration their insulin, which costs manufacturers $6 to produce. This same medicine can cost upwards of $300 at a pharmacy counter, per vial.

The bills blocked by Moser were House Bill 42 and House Bill 90 --Kentucky's version of Alec's Bill -- which would have established a new insulin urgent-need program allowing many Kentuckians to purchase a 30-day supply of insulin for $25, long-term protections under the continuing need insulin program to extend access for 12 months, and a plan to fine insulin manufacturers that refuse to participate in the insulin safety net program.

HB 42 and HB 90 were sponsored by Rep. Danny Bentley, and Rep. Patti Minter, and backed by the T1International's KY #insulin4all chapter.

Despite upwards of 65 legislative sponsors' support, the bills were blocked in the Health and Family Services Committee, which is chaired by Moser. This was the second time the bill was introduced, and failed.

Representative Patti Minter said she expected the bill to pass, and with so many co-sponsors, it should have passed unanimously.

"I originally introduced Alec's Law in 2021 and in the 2021 session it was my house bill at that time. I was so excited to work with KY #insulin4all and I am happy that we were able to build so much support for it and House Bill 42 during this last session," Rep. Minter said. "Again 64 co-sponsors makes House Bill 42 one of the most-supported bills. If you go through the record, there are very few bills that have that many co-sponsors; very very few. I mean there is support in the Kentucky House of Representatives, bi-partisan support from every walk of life, in every corner of this state. There is no reason that these two bills -- House Bill 42 in particular -- should not have had a hearing, because it would have passed unanimously and it would have passed on the floor."

This decision left a lot of the bills' supporters wondering why it did not go up for a vote.

Rebecca Kelly, a Madison County resident who receives her insulin at $25 a vial with a limited-time Eli Lilly manufacturer coupon, said she was very disappointed in the outcome of the bills. Without a coupon, Kelly's 90-day supply of insulin would cost her a total of $1,200.

Kelly, who was in close contact with Moser before her decision to block the bill, said a change needs to be made.

"I think Kentuckians should take a long, hard look at their representatives," Kelly said. "Politicians that were voted in to take a stand and fight for Kentuckians are opting for higher political ladder status, or siding with an agenda that is not the best for the people of Kentucky. People need to go online, see who voted in the best interest of Kentuckians living with diabetes, and note those who did not. When it comes time to vote, we need to remember the decisions made that were not on our behalf."

In an interview with WKRC's Christian Hauser in Frankfort, Moser told the reporter she did not place HB42 and HB90 on the agenda because other bills had "higher priority."

Diabetes advocates as well as many other Kentuckians living with diabetes ask, "What is higher priority than human life?"

According to Kelly, in another interaction she had with Moser, the representative did not seem to understand a previous bill that had passed and why Kelly was not covered in that legislation.

Last year, Governor Andy Beshear signed HB95 which capped insulin at $30 per prescription for those on state-regulated plans only. According to Kelly, this law benefits approximately 20,000 Kentuckians living with diabetes -- but not herself and others she knows.

In an email response to Kelly, Chairwoman Moser stated she was "confused" as to "why the cost of your meds has not been reflected in this change."

"Legislators who represent us should, at a minimum, understand the legislation policy they are voting on and know it inside and out, correct?" Kelly asked.

According to Kelly, she emailed Moser back promptly and addressed her confusion as to why she, and many other Kentuckians are not covered under the HB95 copay cap, and expressed the need for HB42 and HB90.

However, Kelly and other members of the T1 International KY #insulin4all chapter did not hear back from Moser after several email attempts.

Kelly said the lack of education amongst bills, and even diabetes as a disease was alarming, not only at the state level, but at the federal level as well.

On March 31, the federal House passed the Affordable Insulin Now Act (HB6833) which will now head to the Senate. This bill is a co-pay cap, not a price cap, which still excludes thousands of insured persons living with diabetes.

Before its passage in the House, USA Today reported last Wednesday that Matt Gaetz, who voted 'no' on the insurance copay cap bill, claimed diabetics should "lose weight" if they needed insulin.

Kelly argued diabetes education is needed at the forefront of policy decisions as she and others feel that decisions are being made without a comprehensive understanding.

"This is an obvious statement of ignorance. To take it a step further, why do we even have to go through politicians for our medical health? How can we bring about change when our own elected officials know very little about the disease or current legislation? Our affordable care and medications are entrusted to our physicians and should thus reflect their decisions on our healthcare, not politicians," Kelly said.

The T1International KY #insulin4all chapter is hoping the third time will be the charm with plans to reintroduce the bill in next year's session along with the support of Rep. Minter and other sponsors of the bill.

Minter said she is absolutely ready to go at this again in the next session.

"I am deeply committed to sponsoring this bill again and working as hard as I can with our coalition partners to make sure this bill gets a hearing and that it gets a floor vote this year because people who live with Type 1 Diabetes need access to life saving insulin and no one should lose a limb, their kidney function, their vision, their lives because they don't have access to a life saving medication that only cost $6 a bottle to manufacture," Minter said.

With the year ahead, T1International KY #insulin4all is ready to gain more support and momentum.

"We plan to regroup, reach out to more organizations to develop partnerships in improving the healthcare of all Kentuckians," said Kelly. "We had support from organizations such as the American Diabetes Association, the AARP, and Foundation for a Healthy Kentucky. We will continue to push for #insulin4all."

The Register sent several emails and made multiple phone calls in an attempt to contact Chairwoman Moser for this article. All attempts went unanswered prior to going to press.