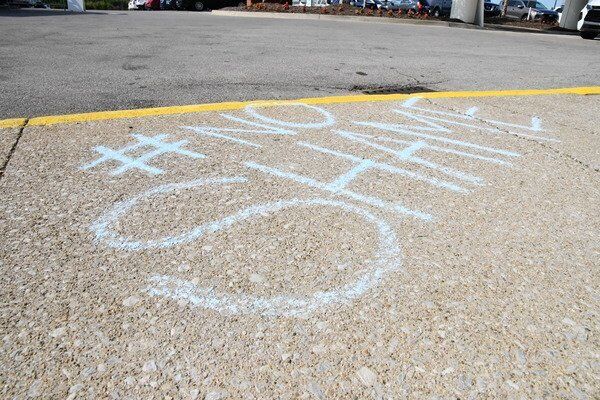 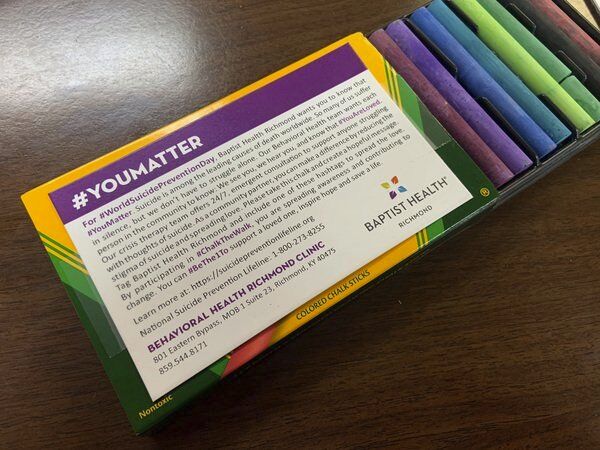 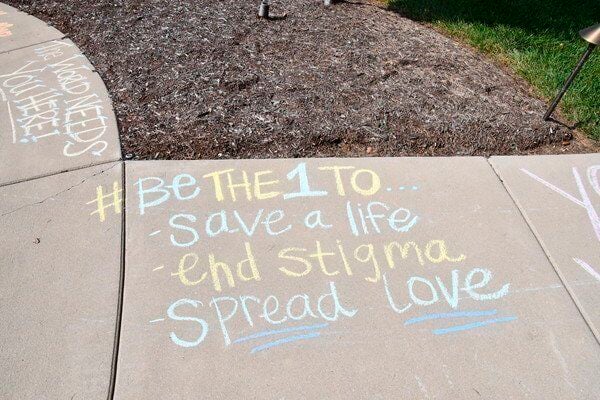 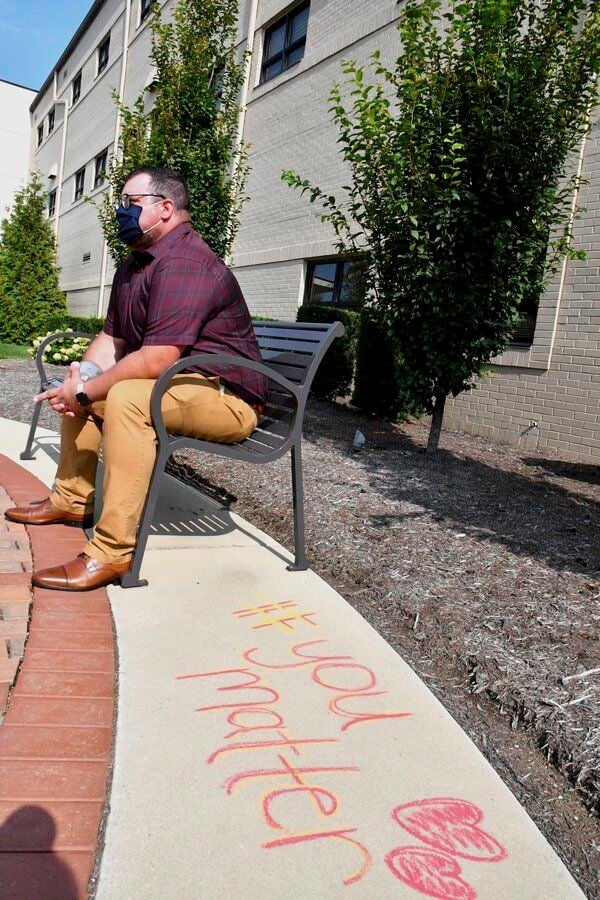 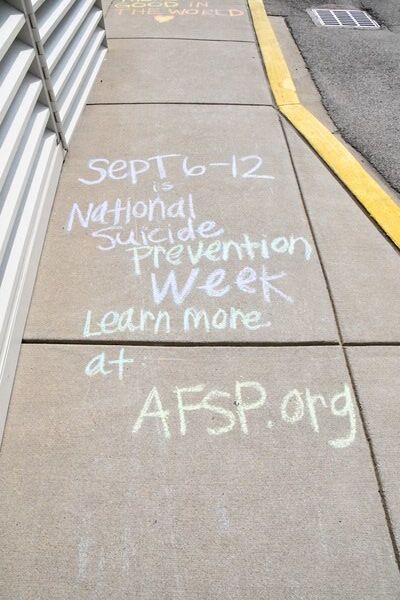 Art made along the Challk Walk event. 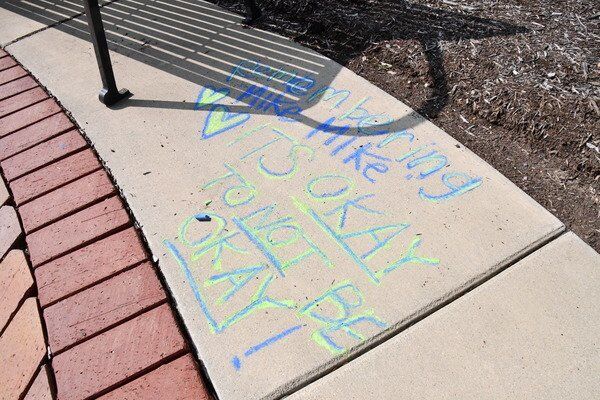 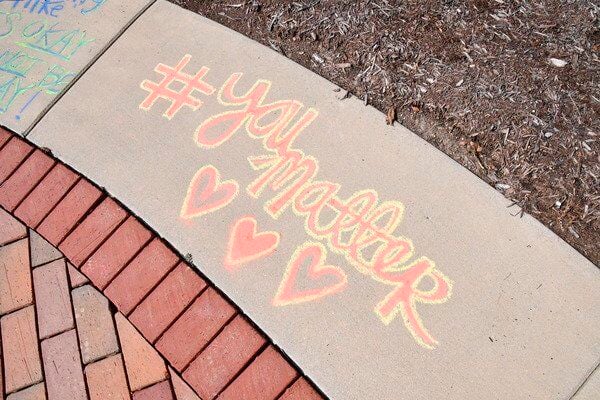 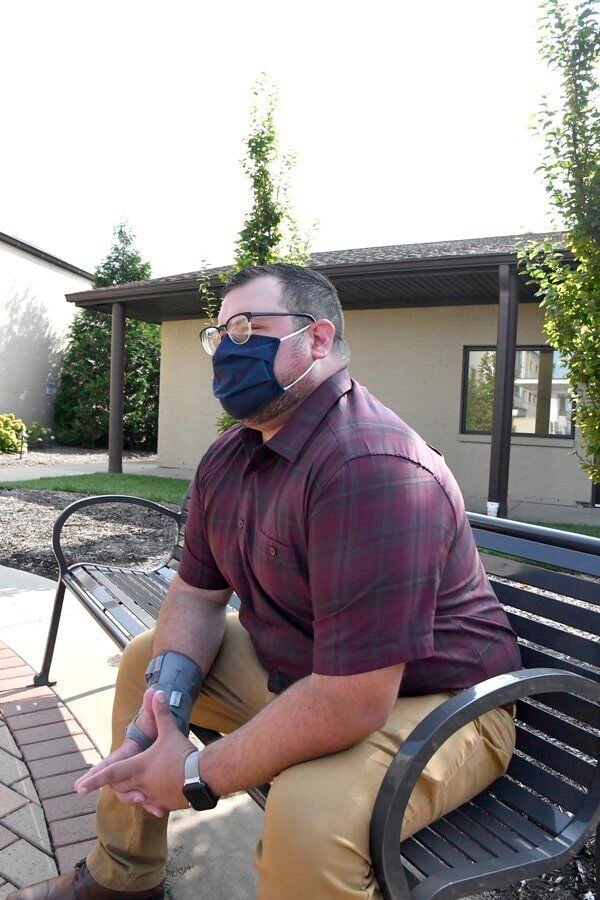 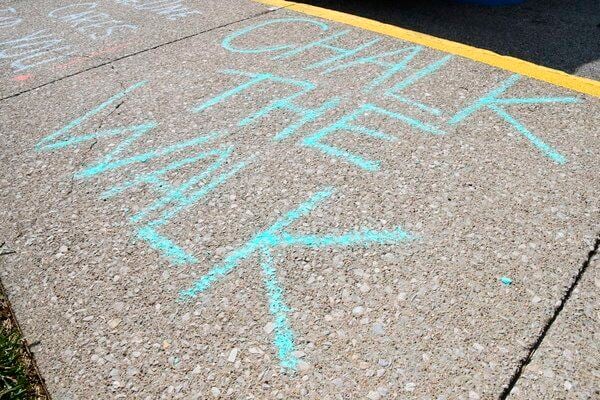 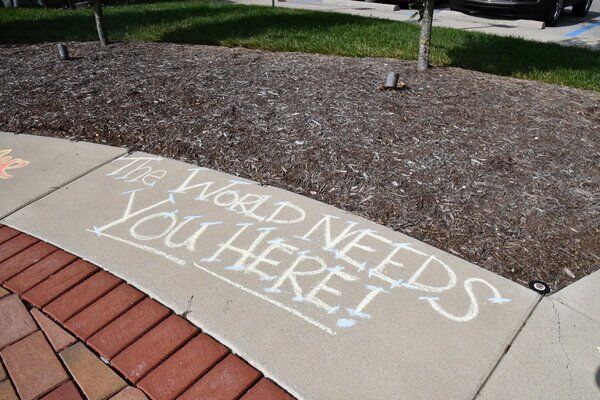 Art made along the Challk Walk event.

Nate Sandiford, a radiologic technologist in the cardiac catheterization lab at Baptist Health Richmond, sat on a bench in the hospital's healing garden in the bright sunlight Thursday morning.

He was surrounded by chalk messages of hope that just 30 minutes prior were written on the sidewalks as part of Baptist Health Richmond's 2nd annual Chalk the Walk event that promotes suicide prevention and awareness.

It was World Suicide Prevention Day and among the messages of healing and hope, Sandiford recalled his own personal story of suicide.

In 2017, Sandiford was out of town when he heard the news that his mother, Mary Ann, had taken her own life.

The news was shocking.

"My mother was a very happy, outgoing person on the outside. At parties and get-togethers, everybody always loved to see my mother. She was always just that glowing person in a crowd. When she walked into the room, everyone lit up and was happy to see her," Sandiford recalled.

"Unfortunately, my mom had a lot of issues with depression that she did not let many people know about. So there was a side of her that was always kept hidden," he said.

Sandiford said his mother internalized a lot of the pain, emotions and issues she was dealing with -- she was scared to speak openly about her struggles for fear of being judged.

"She never really wanted to get the proper treatment because she didn't want anyone to know that she was fighting depression. She was scared of what people would think if they found out," Sandiford added.

Unfortunately, after years of isolating that part of herself, Sandiford said it became too much.

"When it gets to the point where you feel like you have no where else to go, you just find some kind of outlet. For her, (suicide) was the only thing, I guess, that made sense," he said.

He wishes now that his family would have talked more openly about mental illness and encouraged his mother to reach out.

"She didn't realize how common depression and anxiety really are in our society, because no one likes to talk about it much… There is such a big stigma with any kind of mental illness. If I could go back, I would try much, much harder to help her seek treatment," Sandiford said.

Now, he said, his daughter will grow up with very few memories of her outgoing and wonderful grandmother.

"This has left a hole in our life and our family that will never be filled again. I wish she were still here," Sandiford said of his mother's loss. "It could've potentially been prevented. That's the hardest thing."

As part of the healthcare industry, Sandiford said he hopes society will continue to push for open, honest discussions about mental illness and treatment -- normalizing it as a medical condition that can be treated just like a wound or heart condition.

"Mental health issues are just as problematic as any other illness. It's absolutely just as serious as diabetes, heart disease, cancer or any other illnesses there is. It can also be treated. I wish my mother had felt more comfortable about getting treatment," Sandiford said.

The radiological technician said he is proud that Baptist Health Richmond is doing there part to spread awareness about suicide and mental illness.

"We offer all these different services and mental health is one of them. I think that's the way it should be. Its just as important to treat that of the mind, as is it is the body," Sandiford said.

"If we don't do things like we are doing today. Things are going to continue to go on the same way.

"How many more people are we going to lose?" he added.

Sandiford's story is why Katelyn Arvin, Baptist Health Richmond Behavioral Health clinical manager, said the hospital was determined to continue its Chalk the Walk event despite the pandemic.

"The purpose is to spark a community conversation about suicide and prevention and to acknowledge the losses in our community and how we can work together to help others struggling with mental illness and possibly prevent suicides," Arvin said. "No one should struggle in silence."

This year, the hospital held a virtual Chalk the Walk to allow for social distancing and offered members of the community free chalk to inscribe their own messages of hope or to honor a loved one.

According to Arvin, communication is key to reducing the stigma surrounding suicide and mental illness.

"It's extremely important to have these discussions. As a clinician that does a lot of crisis intervention, I know a lot of people tend to stuff their feelings and emotions or hide them for fear of being judged. It's so important that people know that asking for help is not a weakness, specifically when we are talking about suicide or suicidal thoughts. We as a community need to foster an environment where people feel free to openly discuss their issues and society responds rather than reacts," Arvin explained.

Arvin said she hopes society will start to normalize conversations about mental health.

"All of us have a brain and a heart. There is a huge physiological connection between physical health and mental health. At Baptist Health, I'm proud of our behavioral health services. We want to provide the best care and treat the entire person," Arvin said.

According to the clinician, Baptist Health Richmond has four therapists on-call 24 hours a day to help patients who need help.

That work is important more than ever, Arvin said as the pandemic has led to more isolation and anxiety in many.

"We want people to know we are here and that they are not alone during this. There are many resources online and many national hotlines people can reach out to, but we want the community to know that there are also resources here locally they can use," Arvin explained. "In this time, I think people really need that connection to another and that can be done right here in Richmond."

According to Arvin, local mental health resources like the behavioral clinic at Baptist Health Richmond has been shown as great protection against suicide.

The other, is open and safe discussions.

"My hope is that we, as a society, start to shed more light on mental health and wellness. We want people to feel comfortable and to normalize the subject of mental health," Arvin said.