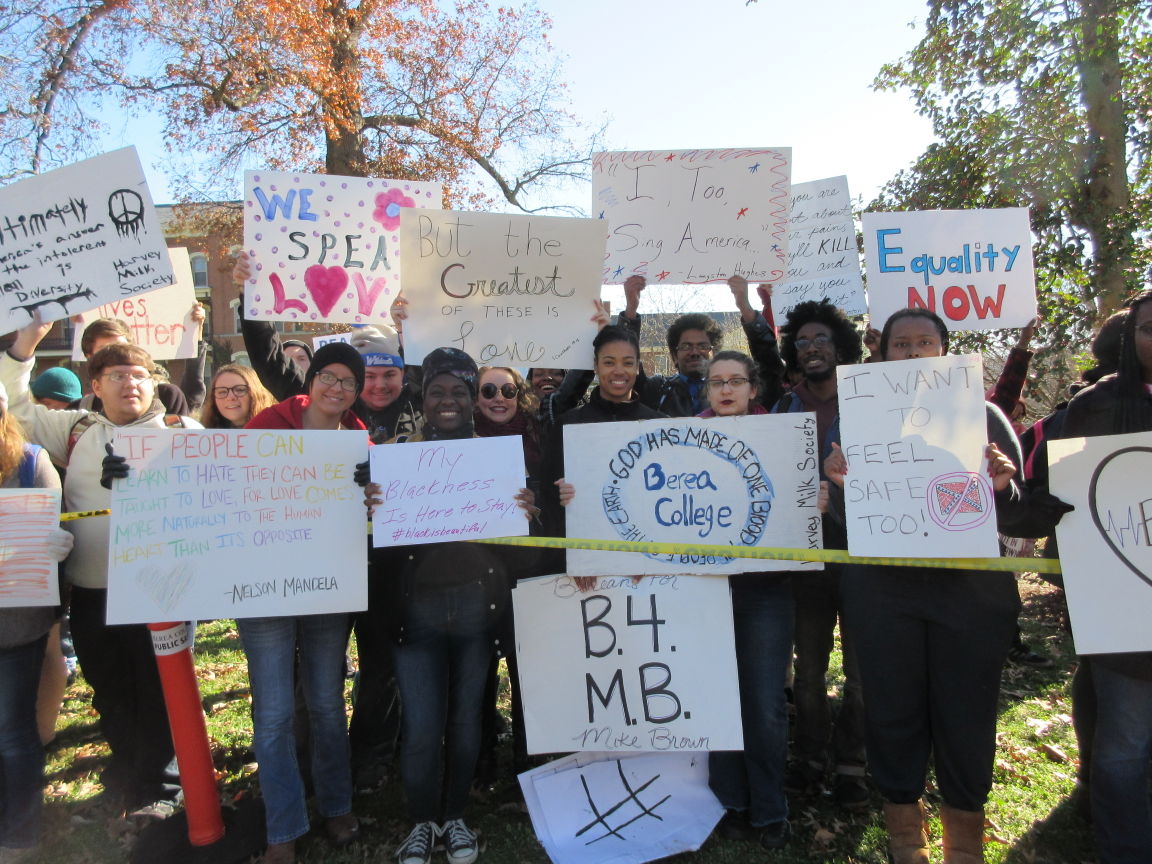 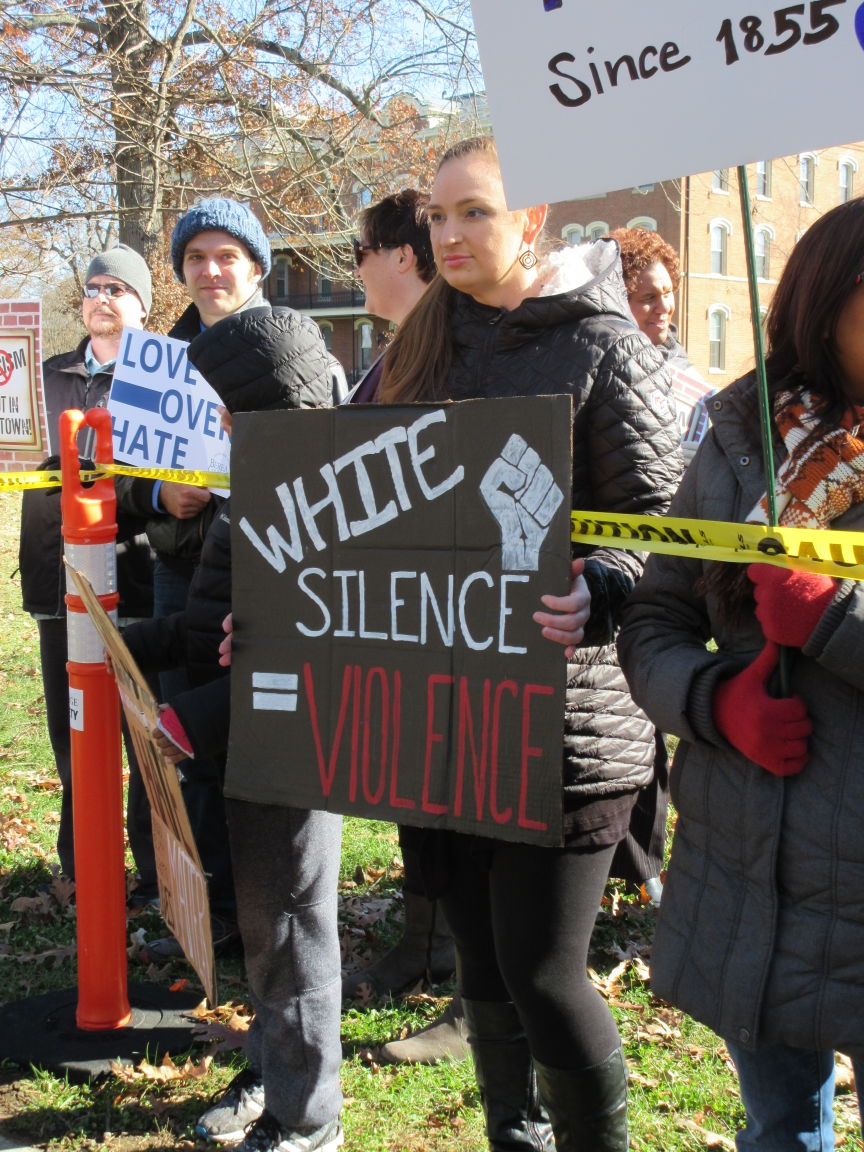 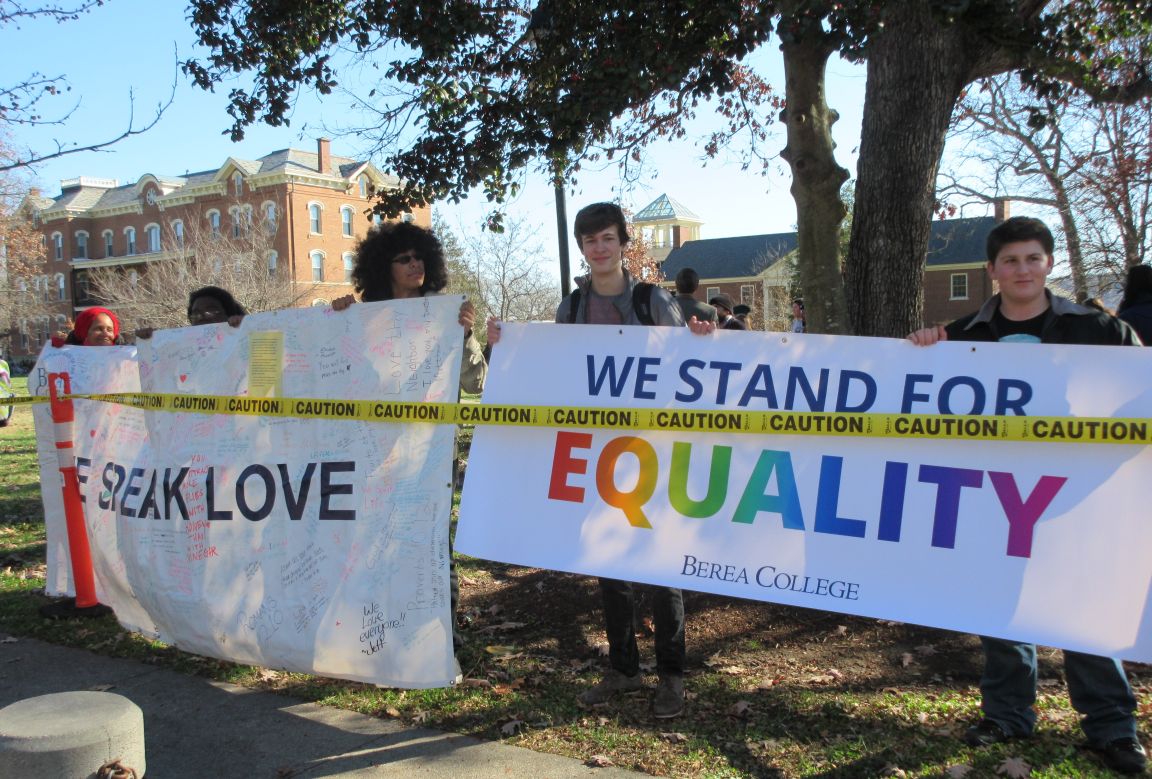 On Monday at Berea College, President Lyle Roelofs came together with his students and the community in the form of a peaceful demonstration. The event was in response to recent harassment incidents targeting students of color and LGBTQ students that have been occurring around the college since homecoming night.

Participants were lined up in front of the President’s home on the south side of Chestnut Street and held signs that represented the scriptural motto that the college was founded on “God has made of one blood all peoples of the earth.” Some were chanting messages like “All People,” “Hands up, don’t shoot” and “Our streets.” Some were singing and some were silent, but they were all making the same stand.

“We believe that standing together in a public way against harmful and hateful behaviors directed toward anyone in our community is a way for everyone to show support for all its members and to demonstrate our strong disapproval of those who would try to make anyone feel unwelcome and/or unsafe on our campus or in our town,” Roelofs stated.

While Roelofs doesn’t know if the event will impact the perpetrators, he said that if he was in their shoes and saw a whole community rise up in indignation, it would have an effect on him and he hopes it does on them.

A largely diverse crowd attended, including parents with their children like Jennifer Roberts and her son Jaren who are new to the city of Berea.

“I heard about the recent events that were disturbing and unsettling. We support what President Roelofs said in his statement and that’s why we are out here today,” said Roberts.

“When a community is confronted with small minded people that try to enhance their inadequacies by cartoonish behavior, the proper response is to do something that promotes the civilized side,” said Berea Mayer Steven Connelly. “To not lash back or engage in a low brow argument, but to celebrate what is really important. And that is human dignity, freedom, democracy and impartial love.”

Anna Loveless, President of Bereans for Mike Brown, feels that the demonstration has helped empower the survivors of the harassment.

“It gives them a platform to say this is not okay, and the community supports me,” Loveless said.

Even a group of Berea Community High School (BCHS) students were among the demonstrators.

BCHS junior Malcom Davis said, “We just came to join the event, show our support, and stand for what we believe in.”

The students were accompanied by Amy Neugebauer, a student intern of the counseling department at BCHS.

While the main goal in Neugebauer attending was to keep her students safe, “I think we should try to promote tolerance and diversity in our school. Coming here is an extension of that,” she added.

Whitney Owens, a Berea College Peace and Social Justice Graduate, passed out lyrics to the song “Lean on Me” to the crowd. This action was spurred after her husband had a dream the other night of the crowd singing together.

“The event shows that a lot of people are on God’s side or opposing the status quo. They are saying that a lot of the horrendous actions that occur in society aren’t what most people believe in,” said Owens.

Public safety was on hand to make sure everyone was safe and secure. Berea City Police Chief David Gregory was also on the campus.

“We live in a society where this shouldn’t happen. It has been really very shocking to me,” Gregory said of the harassment incidents. He was however disappointed to see that some of the signs being held up had statements on them about police brutality. “Unfortunately, it does happen across the country, but as far as Berea Kentucky and my own department, we have core values that we live by. It doesn’t happen here,” Gregory added.

According to one demonstrator, Sara Jo Jacobs, a tan SUV drove by displaying the confederate flag but they did not cause any distress.

The issue of harassment had been brought to President Roelofs attention after four students spoke to college officials, the county attorney’s office, and with the Berea City Police about what they had experienced. The students reported having soda cans thrown at them, being called the N-word among other slurs, and vehicles with the Confederate flag driven up and down Chestnut Street.

“Some of the incidents have been described, by some of the students involved, as threatening,” Roelofs said. “Similar incidents (have) occurred from time to time in the last several months..., but the incidents during homecoming weekend were more egregious.”

There have been no arrests made at this time.