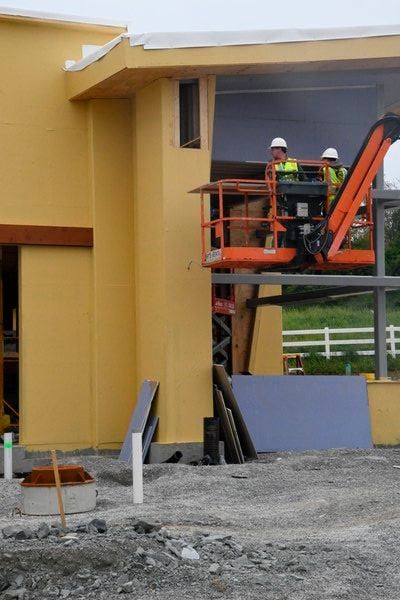 Workers construct the outside structure of what will be home to LaRosa's Pizza in Richmond Centre. 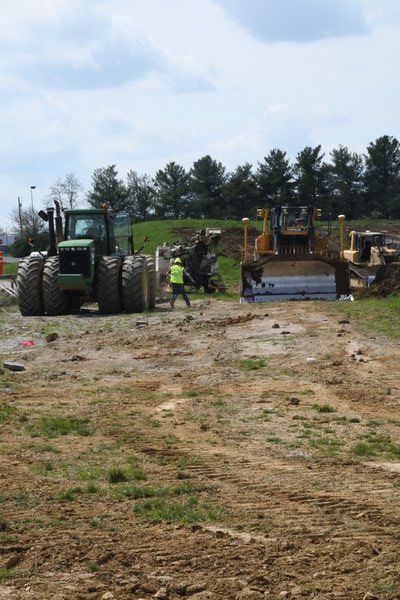 Work also resumed recently at a site on Big Hill Avenue that will become a Richmond's location for a Menards home-improvement chain. 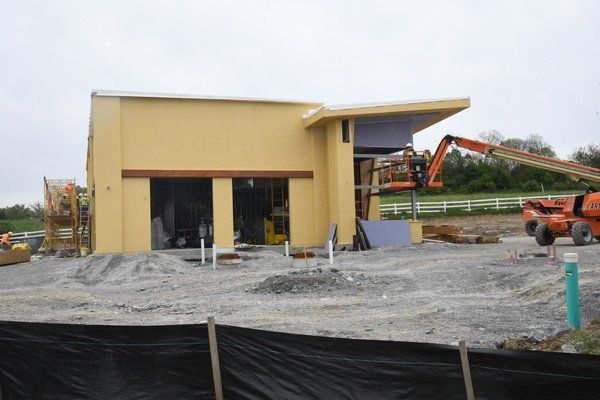 The site of a future LaRosa's Pizza. 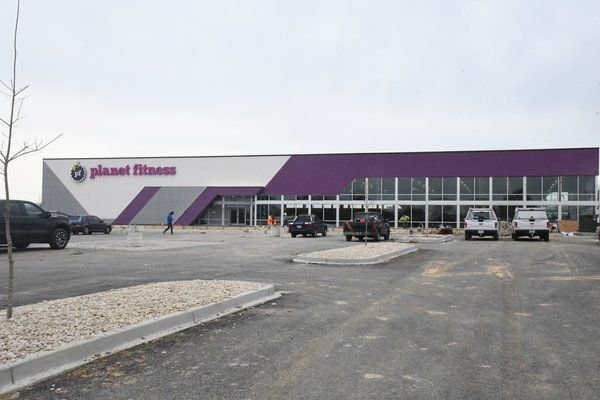 An almost completed Planet Fitness is scheduled to be opened sometime late in the summer. Only work remains to be done to the inside.

Workers construct the outside structure of what will be home to LaRosa's Pizza in Richmond Centre.

Work also resumed recently at a site on Big Hill Avenue that will become a Richmond's location for a Menards home-improvement chain.

The site of a future LaRosa's Pizza.

An almost completed Planet Fitness is scheduled to be opened sometime late in the summer. Only work remains to be done to the inside.

With people off the roads and staying indoors, a lot of space has been freed up for construction workers to continue to update roads and projects throughout both cities and Madison County.

Seeing the most hard hats and fluorescent vests hard at work is the city of Richmond, with many new businesses being built, as well as street improvement projects.

One longtime road project — for which multiple attempts have been made to set right — is Water Street, which City Manager Rob Minerich said should be completed in two weeks.

“I am excited. It has been a long time coming for the citizens of Richmond to see Water Street fixed and fixed correctly,” he said.

All that remains, Minerich said, is the installation of four trench drains that will catch running water and drain it to the storm drains. He said this portion of the project explains the hefty metal covers along the now smooth road of the street.

Once that is completed, all that will remain for the project is to paint the stripping.

It is after this maintenance repair that things can make way for a major project on the books: the West Main Street Project.

This, Minerich said, is a sidewalk and street repair project to be done in four phases that will widen sidewalks making them more accessible, install a bike lane and move utilities out of sight from the road.

According to him, phase one will take place from Water Street to Lancaster Avenue, then up West Main Street. Phase two will extend between Parrish and Sunset avenues. Phase three and four will go from Sunset Avenue all the way up to Bennington Court, which goes past Arlington.

He expects construction would begin on the first phase of the project in late summer after the first rounds of a state funding through a Transportation Alternatives Program (TAP) grant is received in the amount of $1 million.

The city has a local match of 25% for each million dollars received, paying around $250,000 per phase.

Once phase one is completed, the city can apply for the grant for phase two and so on. There is no determined completion date for the project.

In terms of businesses, Minerich told The Register the popular pizza chain LaRosa’s was finding a home in Richmond at the Richmond Centre with the structure already up.

Although it is being built, there isn't currently a projected date for opening. First Watch, a breakfast and brunch chain, will also be set to open next to the pizzeria, even though construction has not begun.

“I would hope by next fall that both are up and running,” he said.

Most notably, and receiving the most attention from residents, is the announcement of construction resuming for Menards, a home-improvement chain.

It was announced early this month by Minerich himself that construction will begin again after a fatal incident occurred on the site nearly three years ago.

“In my time as city manager, that is probably the question I have received the most often, ‘When is Menards opening? When are they going to start back on Menards?’” he said.

According to a spokesperson with Menards, Jeff Abbott, construction has began, but with “everything going on,” it is unknown when it will be completed. Previously, he said he had hoped for the site to be finished at the end of summer.

“It is up in the air,” Abbott told The Register.

Also, a Planet Fitness being built on Boggs Lane is nearing completion to the outside of the building, but still has the entire inside to construct.

Additionally, old facilities out at Lake Reba are receiving a little tender love and care, including the rebuilding of the old playground to be all-inclusive, with new wheelchair swings and areas designed to accommodate those with disabilities.

“This is going to be a wonderful thing,” Minerich said. He added the playground should be finished by the end of May.

Also at Lake Reba, the basketball courts are being redone, and Adventure Falls is getting new turf on all of their putting greens.

In the city of Berea, one project that was being looked forward to was that of the Berea Bypass expansion.

This project was listed as one of six originally recommended as a priority by the state Transportation Cabinet, as part of its six-year priority roadway plan.

The bypass project consists of four-lanes for a total of $23.72 million, with work originally slated to begin in 2020. This project is paid for entirely through state and federal funding.

Originally, the project was scheduled for a later date to begin construction. In February, it was announced at Berea’s State of the City Address that it had been moved up.

As of Friday, Berea City Administrator David Gregory said he had not received any update on the project, but knew the state is working on a list for Richmond Road and are correcting major areas that need to be addressed.

Gregory said currently, the city of Berea will begin very soon on a sewer project near Holly Hill Drive as well as public works fixing an area located on Lynne Drive, which will focus on a large section of pavement that needs repairs due to a water line burst.

One of Berea’s biggest project announcements throughout the 2019 year was their plans to construct a multi-use pavilion, which Gregory says is still in the design phase.

According to two preliminary estimates, the multi-use pavilion could cost about $500,000, however, the city is hoping to receive a matching grant from the Governor's Office of Agricultural Policy in the amount of $240,000.

The pavilion would be located on Chestnut Street in the empty parking lot next to the Tolle Building. It would be about 25,000 square feet in size and would have 70 parking spaces. In describing the pavilion for commissioners at a prior tourism meeting, Fraley said the venue could also serve as a place for concerts and other community events, and it could be an important economic gateway into the community.

"It would be a great asset for our community, and it would be a multi-use facility," Fraley told council members previously.

Madison County officials were contacted, but were not able to comment by the time the article went to the press.