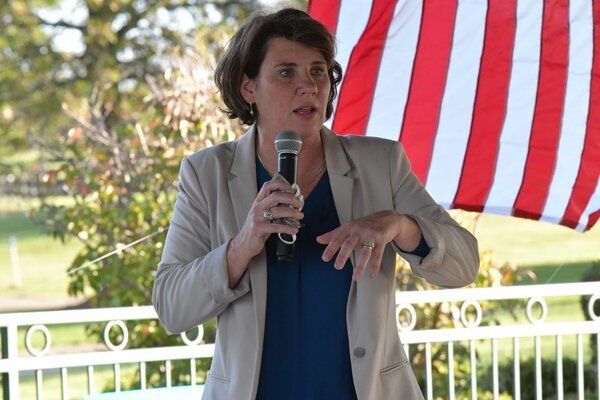 Amy McGrath speaks to a crowd gathered at Lake Reba during a campaign stop in Richmond on Wednesday. 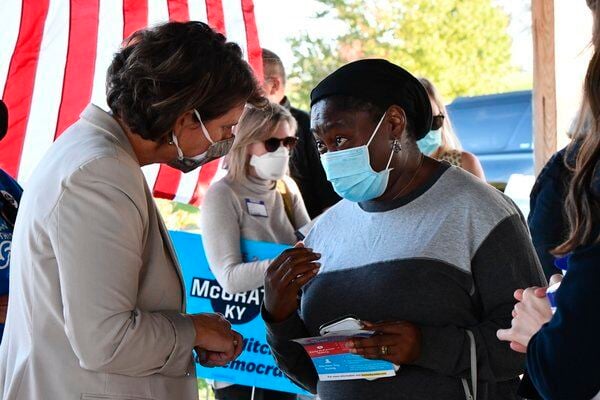 Democratic senate candidate Amy McGrath speaks with a voter on Wednesday during a campaign stop in Richmond.

Amy McGrath speaks to a crowd gathered at Lake Reba during a campaign stop in Richmond on Wednesday.

Democratic senate candidate Amy McGrath speaks with a voter on Wednesday during a campaign stop in Richmond.

Speaking to a large gathering at Lake Reba, McGrath outlined her vision for the future of Kentucky while also taking swipes at McConnell -- who has served 36 years in congress and is the longest-serving senator in Kentucky history.

McGrath told the crowd on Wednesday, the debate showed the Republican senator's focus has drifted while in office; accusing him of being out-of-touch with what Kentucky needs.

"You have somebody that talked more about Washington D.C., New York, California, Puerto Rico -- for some reason -- than he talked about Kentucky. He is totally disconnected with what we need right now in this state," McGrath said.

McGrath also alluded that McConnell has prioritized the Supreme Court over the lives of Kentuckians in desperate need of stimulus relief funds as Congress has deadlocked on a deal.

During the debate, McConnell blamed House Speaker Nancy Pelosi for the inability to pass a stimulus relief bill promptly.

"Look, I know how to make deals. I made three major deals with Joe Biden during the Obama era. What the problem is here is the unwillingness of the Speaker to make a deal," McConnell said during the debate on Monday.

On Wednesday in Richmond, McGrath said the senator was just making excuses and eschewing responsibility.

"We need leadership. Look around, we have one of the worst trajectories on the planet. We have significant job losses in the state, we have COVID cases on the rise, and we have Senator McConnell in office right now, who is still playing partisan games and not doing what is right for America and for his constituents in Kentucky," McGrath said.

The democratic candidate also pointed out McConnell's now-viral chuckle when the coronavirus pandemic was brought up in the Monday night debate.

"The most important issue of the day is coronavirus, it's what we are all dealing with. The only important job the senate has right now, that is critical for the American public and critical for constituents in Kentucky, is getting the aid that we need to get through this... He starts laughing. This is a man that has been there so long, he thinks this is all a political game… It's not, it's people's lives and livelihoods… He's been part of the problem so long, he doesn't even see what the problem is anymore," McGrath said.

While speaking to voters on Monday, McGrath said the need to put partisan politics aside is crucial in getting through the coronavirus pandemic.

"I'm a proud Democrat, but I'll tell you now that I will never put party over country. I didn't do it when I served in the military and I won't again if I serve as your senator," McGrath said.

For months, McConnell has crisscrossed the state touting the $13 billion share for Kentucky from the more than $2 trillion virus-relief package passed by Congress in March. It included aid to state and local governments, hospitals, schools and businesses and payments to individuals.

In late summer, McConnell unveiled a slimmed-down version of another relief package totaling about $500 billion, which stalled amid partisan wrangling over its size and scope. A $3 trillion bill passed by the Democratic House in May, he said, was "too much, too soon, and we needed to wait a little bit and see what we had already done, see how it affected the country."

McGrath said she would work to provide immediate aid to those affected by the pandemic in forms that help regular people who might have lost their jobs to shutdowns or have had to quarantine due to virus outbreaks.

The candidate also stressed the lack of a clear plan on how to deal with the pandemic.

"There is still not a national testing and tracing program and the resources to do that. All these other countries have been able to mitigate the coronavirus, with a plan to make sure that people are safe and schools can reopen and people can get back to work. Why haven't we been able to do it?" McGrath said, noting the highly partisan wrangling of the relief bills in Congress.

McGrath told voters a plan was crucial if Kentucky and the nation are to move forward.

Once the COVID-19 pandemic is under control, McGrath outlined her plans to rebuild Kentucky.

McGrath said the state needed a leader that would ensure Kentucky has the resources it needs and prioritize the allocation of money to areas and local governments that have been ignored far too long.

"Widespread broadband is the new electricity," McGrath said of her plan to shore up the availability of internet in rural locations. "Back in the day, we worked together as a country to ensure places like Kentucky had electricity. They didn't wait to see if some private corporation could make money off of it. They worked together because it was a necessity. When I was a kid in school, all you needed to succeed was a pen and some paper. Today, you need a computer and internet. Not only is broadband access essential for our school children and schools, it is also a necessity for businesses as we move forward in the future. We need to create a Kentucky that is attractive to businesses and we need to have the resources for them to work."

"We did it once before as a country, we need that same kind of commitment again," McGrath added.

The candidate said she welcomes more debates with McConnell in the future as the weeks narrow to Election Day.