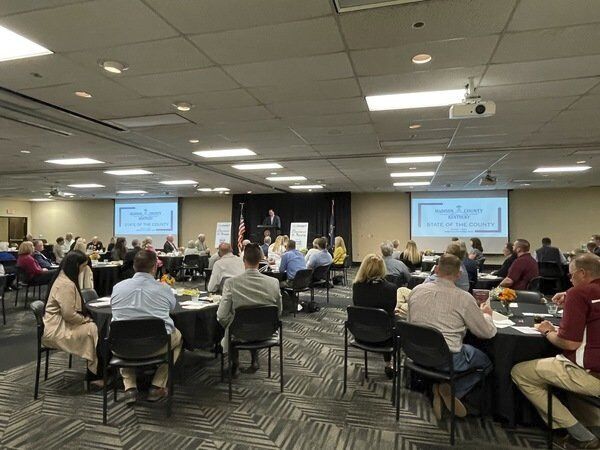 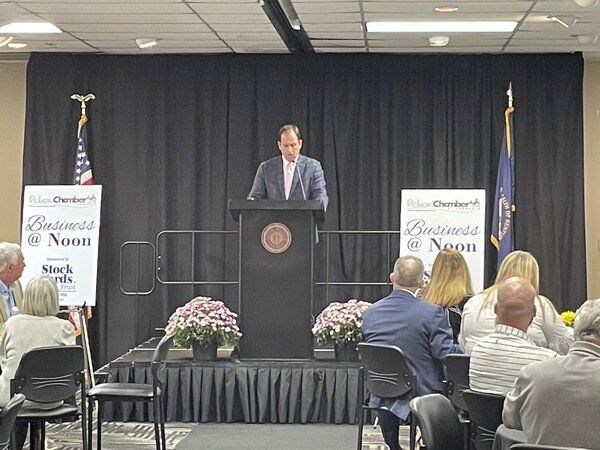 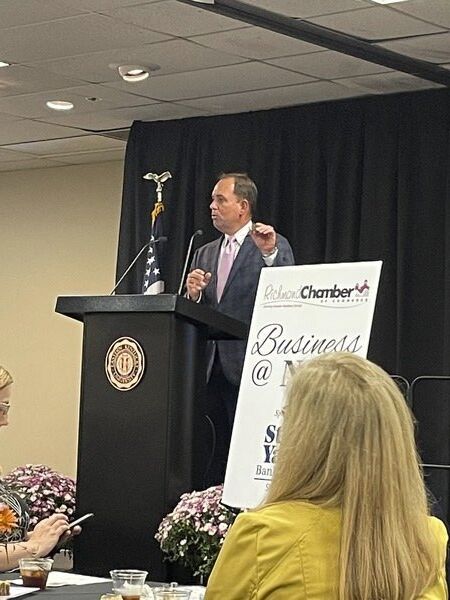 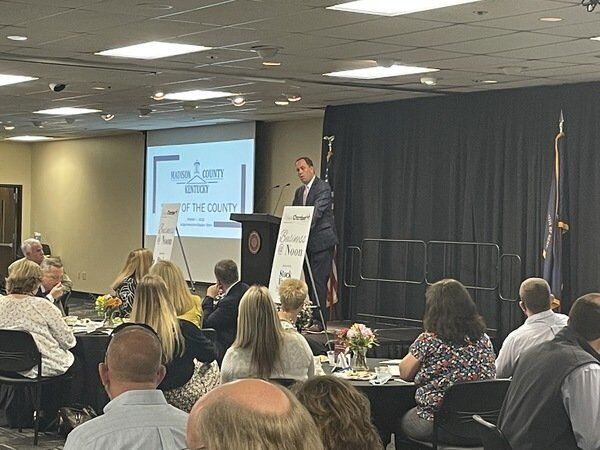 Madison County Judge Reagan Taylor announced he is running for re-election as judge executive in the 2022 Election at his State of the County Address on Thursday. Taylor has served in the seat for seven years and presently is the President of the Kentucky Association for Counties.

Taylor began his career as an entrepreneur starting his own construction and real estate company prior to shifting to a career in public service.

In 2018, he won his second bid for judge running unopposed in both the primary and the general election. In his speech before announcing his decision, he referenced a coin he carries in his pocket each day.

"Service above self," he read from the coin. "Everyday I walk around and feel this coin hit my pocket knife and I remind myself of how I want to run my administration: service above self."

He stated at the end of his speech, Madison County has a promising future which he was proud to lead and hopes to continue to do so.

"When I first decided to run for Judge, I told all of you — I felt called to do so — I wanted to improve Madison County and make it a better place for my family and yours," he said. "I am all in."

During his address he stated he was happy to be back in front an in-person crowd and give the State of the County. The last time he did so was 29 months ago in 2019, before the pandemic occurred. He brought up issues such as the drug epidemic, jail overcrowding, post-CSEPP and broadband infrastructure.

In regards to the detention center, the judge said Madison County was growing, and as a realist, it can have positives and negatives.

"I’m always quick to brag on our county and its accomplishments, but I’m also not going to give anyone a false perception of the state of our county," Taylor said. "I’m not afraid to tell you the truth, and I think I have proven that."

He said most of the audience knew the financial hardship the drug epidemic has taken on the county with an allocation of an additional $3.6 million to the jail and $1.5 million to the sheriff's office — an increase of 104% since Taylor took office.

As of Thursday, the county is responsible for 521 inmates in a jail designed for 184, he shared.

"This is a problem that is only continuing to present challenges – but one we are preparing to tackle," he said. "And while some may think that is merely a Fiscal Court issue... I’d argue, you are wrong... addressing our drug epidemic and jail overcrowding is a community issue and we need your help."

Several implementations have been made under his administration including the rocket docket, additional drug dogs at the sheriff's office, and the road to recovery program in the jail to reduced the recidivism rate which is consistently more than 80%.

Many in this community share the vision I have long discussed of getting more of our citizens into rehabilitation rather than incarceration – but we need more.

"Our coroner, Jimmy Cornelison has told anyone who will listen, how bad the drug epidemic is and the increase in drug overdose deaths in our County is already 61 confirmed for 2021, compared to 33 in 2016. As the great philosopher, or at least my kind of philosopher, Dr. Suess once said, “Unless someone like you cares a whole awful lot, nothing is going to get better,” ---- I think that is true for our drug problem. We need every citizen to care about the problem, a whole awful lot," Taylor shared.

In addition, he referenced an opioid settlement in which he was one of the first to sign on an multi-state Opioid Class Action lawsuit. Over the next several years, the county will recieve funds from the settlement to combat the drug epidemic through substance abuse treatment and prevention.

"I don't have to tell this group that I have spent my seven years in office screaming from the rooftops about how the drug epidemic has crippled our community. I promise you this...there isn’t a person in Frankfort who also hasn’t heard my cry," Taylor began. "....It has been the root of so many issues in Madison County: our detention center overcrowding, the impact on our first responders, demand on our health care system, the impact on our workforce, and the fracture of homes and families, to name a few. I have worked tirelessly to ensure Madison County gets its fair share of the settlement funds."

Another challenge Taylor has faced in his seven years, is fast approaching.

Since 1992, Madison County has been working toward the destruction of the chemical weapons at the Bluegrass Army Depot. Taylor said the amount of resources, jobs, infrastructure and money that has been infused into Madison County as a result of CSEPP – is mind-blowing.

"I have said many times, my desire is for the CSEPP program to leave a positive impact on our community when it’s over – we now know the end is nearing as they’ve already destroyed 33 percent of the munitions – there are so many things that the County, our cities and all of our institutions and community partners have had the ability to do as a result of CSEPP funding. In the coming year, this will be a huge priority for me and my team --- working alongside our other community partners, agencies and leaders to create a roadmap for a post-CSEPP Madison County. We will focus on recruiting industry and finding ways to replace the loss of 1,400 hundred high paying jobs."

Taylor is a chair member of the Kentucky Chemical Demilitarization Citizens' Advisory Commission (CAC) and the Chemical Destruction Community Advisory Board (CDCAB) and addresses some of these issues alongside Craig Williams, also at the meeting.

Another hot topic of the address was in regards to the courthouse renovation. It was at a former state of the county address just two years ago, Taylor announced this project. Thursday, he gave an update.

"As many of you may remember, the General Assembly authorized the Administrative Office of the Courts (AOC) to fund a critically needed Courthouse Renovation project. We worked diligently with Judge Logue to address the safety and security for judges, lawyers, citizens, and inmates; accessibility for citizens and efficiency measures that would greatly improve maintenance costs," he said.

In June 2020, the AOC informed Taylor due to cuts during COVID-19, they would not have the money in the budget to fund the project as was outlined in the budget bill. The project was halted.

"Fortunately for us, we don’t quit – or take NO for an answer. Fortunately for us, our legislative leadership listens. With the help of Senator Jared Carpenter and State Representative Deanna Frazier, we were able to secure a direct appropriation in the state budget for a $12 million dollar renovation.

Since that time, many of you have asked, “What is the county doing with the Chase Bank Building?”

The judge and KACo president was pleased to announce that all along the purchase of that building has been to serve as the temporary location for the court system during the construction. In addition, all renovation expenses and lease payments will be paid for by the AOC, meaning there are NO local tax dollars being utilized.

The Courthouse Renovation project kicked off this week with the first project meeting. The project is slated to be complete in the Fall of 2023.

"We are excited to maintain the beautiful history of one of the oldest historic treasures in our county while providing judges and citizens the safety and security both required and deserved," he said.