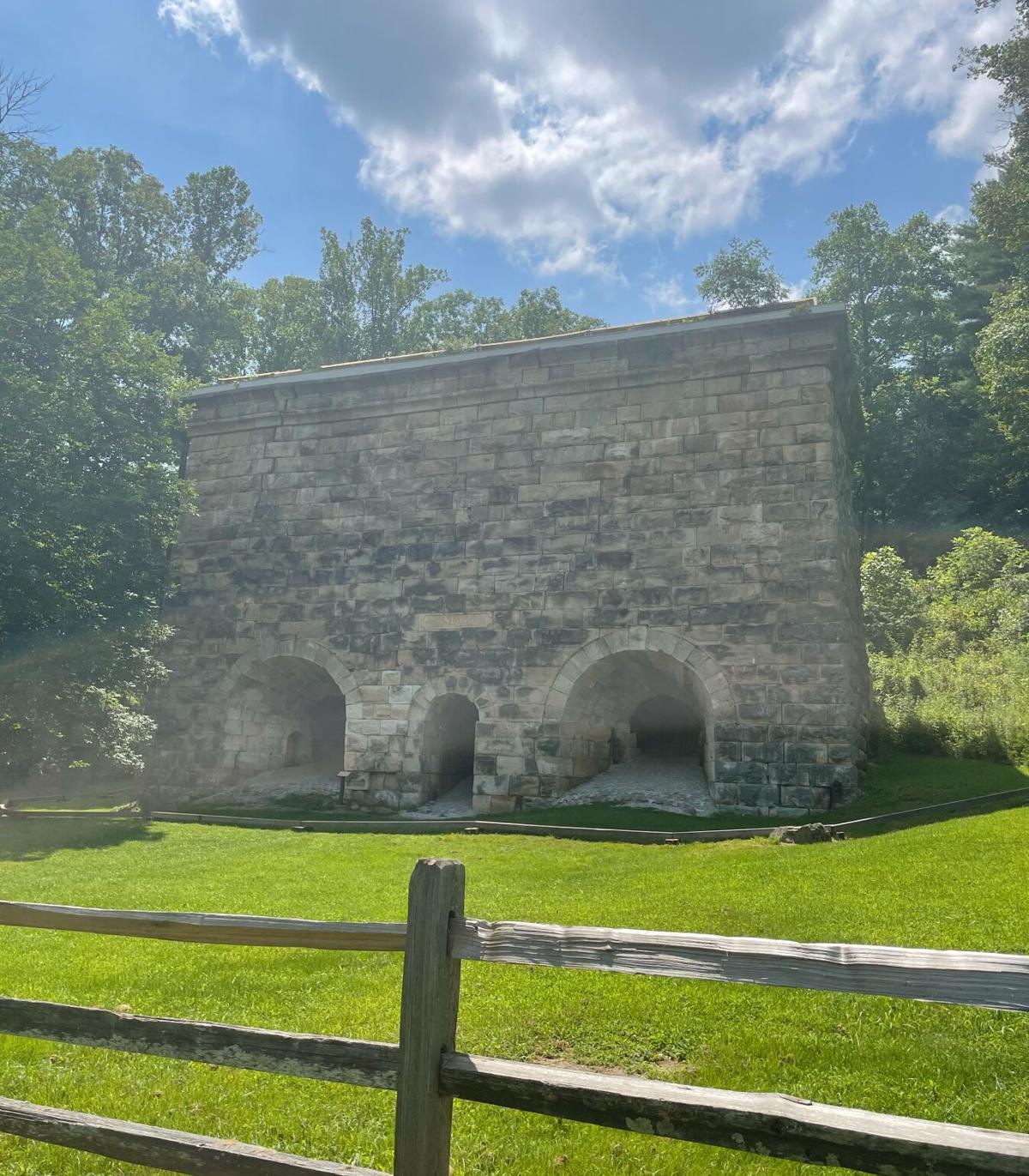 The Fitchburg Furnace was built in 1869 at the height of the iron industry. 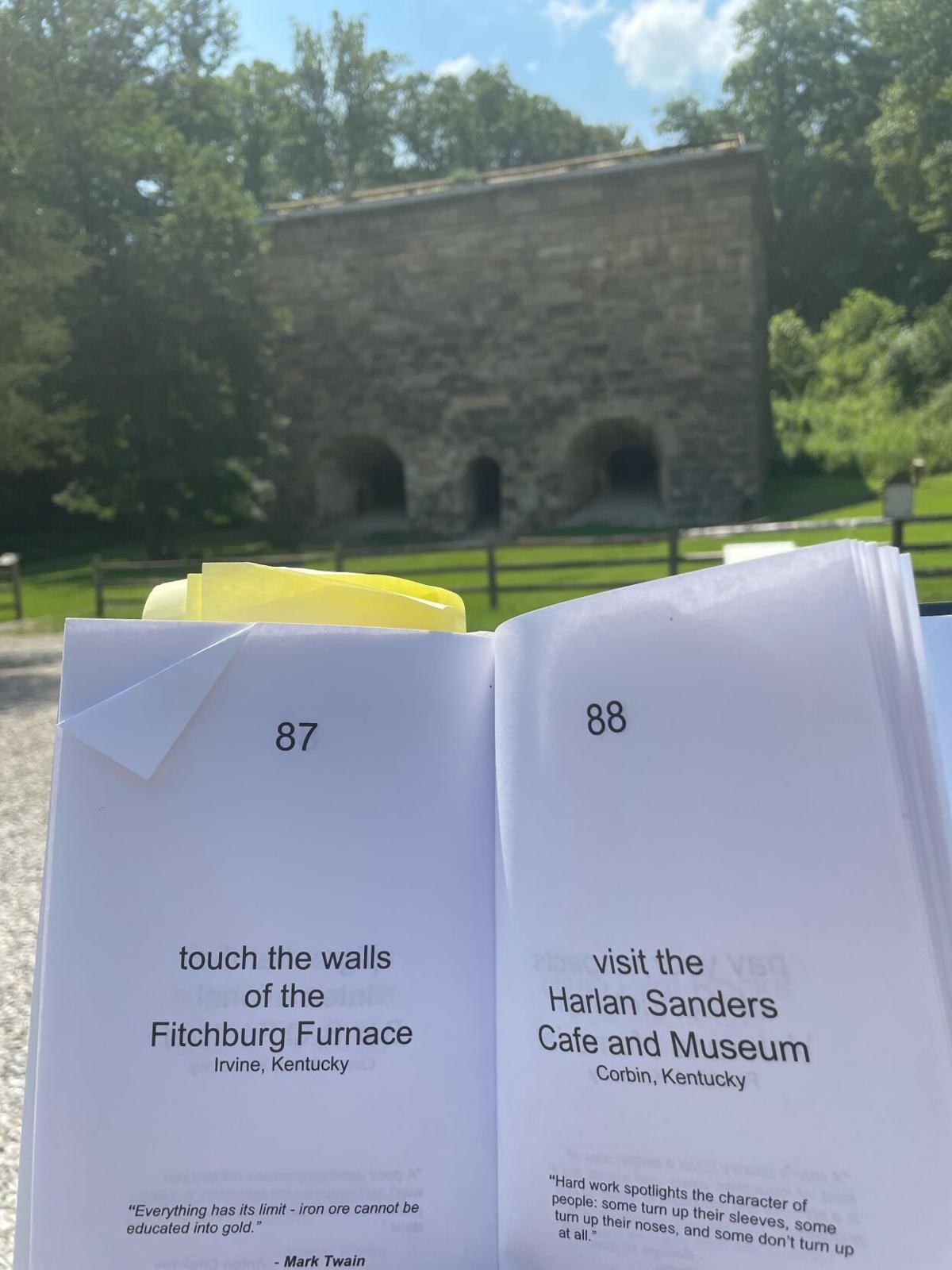 Item number 87 on the Kentucky Bucket List was to touch the walls of the Fitchburg Furnace in Irvine, Kentucky.

The Fitchburg Furnace was built in 1869 at the height of the iron industry.

Item number 87 on the Kentucky Bucket List was to touch the walls of the Fitchburg Furnace in Irvine, Kentucky.

“Everything has its limit — iron ore cannot be educated into gold.” — Mark Twain

This is the quote written underneath item number 87: Touch the Walls of the Fitchburg Furnace, featured in the “Kentucky Bucket List” by Michael Crisp.

For my first task for my column, I stayed close to home by traveling to Irvine, just 30 miles down U.S. Highway 52 towards Daniel Boone National Forest.

According to the United States Department of Agriculture Forest Service’s website, the historic Fitchburg Furnace was constructed in 1868 by Fred Fitch and construction was completed in 1869 by Sam Worthley — just in time for the peak of the iron industry.

It was the last charcoal iron smelting furnace built in America. Standing 81-feet-tall, the furnace is considered the largest charcoal furnace in the world. Its intricate architectural design places it among the top 25 dry-stone masonry structures worldwide.

Ambitious entrepreneurs began construction in 1868 and celebrated the first blast in 1870. According to the website, Fitchburg was part of the larger Red River Iron Manufacturing Company, previously Red River Iron Works. Its owners utilized new technology, developing a hot blast furnace that used boilers to build up gas pressure for higher temperature. Fitchburg is the world’s largest dual-stack furnace. In 1870, with 250 men, Fitchburg produced 900 tons of pig iron. Its venture was cut short in 1875, costing out-of-state investors more than $1 million at that time.

The marker in the historical site, stated the structure helped establish the Fitchburg Furnace Community, which was once a part of a bustling settlement nearby the town, which included mills, shops and homes for more than 100 families. All of whom engaged in the smelting of iron ore.

The marker shares this about the furnace’s demise, “Little by little, the fires in the old furnace flickered out, never to blaze again. Thus, writing the final entry in the journal of iron-making industry at Fitchburg. Fitchburg Furnace, once a scene of a bustling iron industry, now stands silent. Where long ago fire belched out of the stone chimneys, moss has now taken root. The shouts of the iron workers have given way to the cries of birds and insects. The old furnace had its day and then faded into the long years of oblivion, awakening as a modern-day attraction.”

Which brings me to my experience.

I visited the furnace on Saturday, July 24, 2021. Myself, and my partner in all things Kentucky Bucket List experiences and life adventures, Isaac, joined me (Also, my car was on the fritz and I enlisted his help to do this column, so major kudos to him).

He helped deliver not only a check mark for completion in the book, and for sure an adventure.

More importantly, he helped me learn a valuable lesson about patience and perseverance.

We left Richmond around lunchtime, right as the Kentucky summer heat and humidity was setting in. With the windows down and no AC, we set off to Estill County listening to 50s oldies.

We both had burgers with the works and seasoned fries. We cooled off with a crisp, refreshing Ale-8-One (number 32 on the list).

Afterwards we set off to Fitchburg Road where the adventure and lesson both began. The furnace itself was a little more than 12 miles out from downtown Irvine, about 20 minutes.

We put the address listed on the forest service’s site into the GPS and were taken to what was not our intended destination, but someone’s home.

Without service, limited gas, and both of us covered in sweat due to lack of AC, we decided to turn around to get bearings on directions, and to fill up on gas to either go home, or try again.

At this point both of us were hot, irritated and I was being a “negative Nancy” about the situation to put it lightly. However, Isaac encouraged me to go back and go farther on the road to hopefully find the site. He helped me practice patience, and not give up so easily.

Sure enough, we did arrive and the structure was larger and more captivating than the photos do it justice. We were the only people in the area and we read the interpretive signs, then ventured inside the furnace which was damp, dark, and sadly, tagged with some graffiti.

However, it was amazing to admire the large stone bricks (which were larger than my wingspan), and imagine what once was a booming business in the hills of Irvine.

We looked through every space, and pictured how strenuous, and unbearably hot it would be to shovel coal into a towering furnace for a wage of $2 per ton produced.

Once we had seen all we could, we hopped back in the Jeep, and headed home to Richmond. It was a great experience I am glad we saw through to completion.

As of now, the plan is to head to Eastern Kentucky this weekend to Prestonsburg/Pikeville area. There are several items on the Kentucky Bucket List which are located in Floyd County which include seeing a Spring Warbler in Jenny Wiley State Park, as well as visiting the grave of Randall McCoy from the infamous Hatfield and McCoy feud.

Thank you dear reader for going with me through this journey throughout the state of Kentucky! I can’t wait to share my next adventure with you.

Editor’s note: This column is an ongoing series inspired by the Kentucky Bucket List book written by Michael Crisp. You can purchase the book online at Amazon.