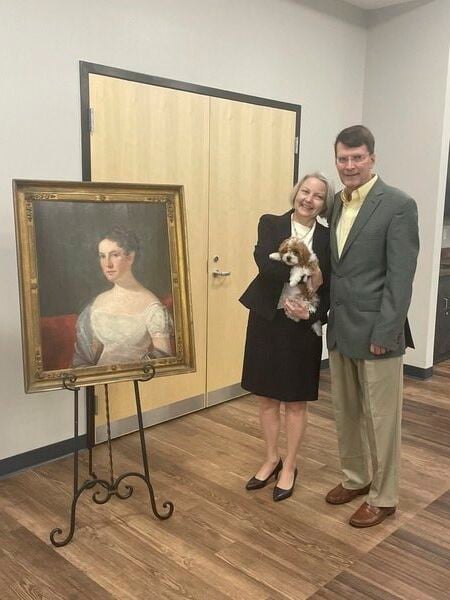 Sharon and Mack Cox stand alongside one of nine paintings they own of The Redd Family Portraits. 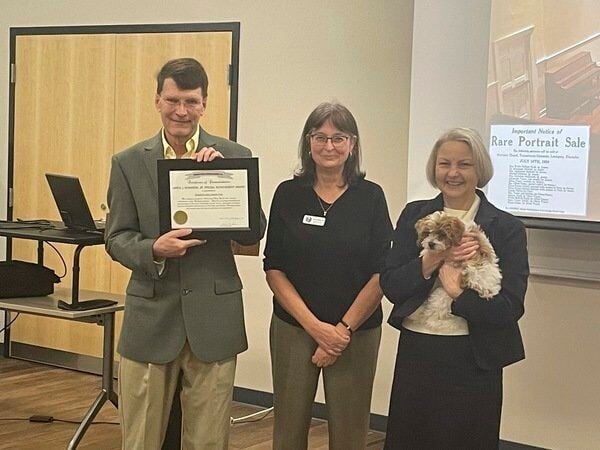 Sharon (right) and Mack Cox (left) were honored with an award by the Madison County Historical Society presented by President Sharon Cox. 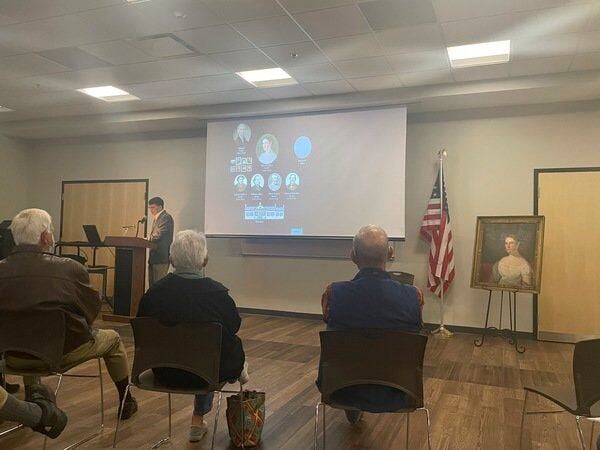 Mack Cox gives a presentation about the The Redd Family Portraits. 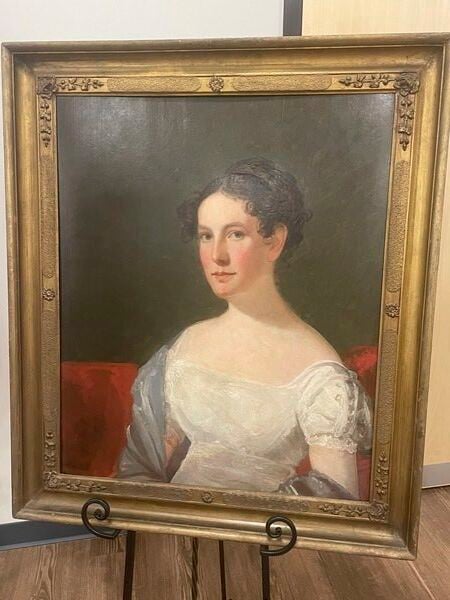 Rebecca Allen Redd was the sister-in-law to Matthew Harris Jouett.

Sharon and Mack Cox stand alongside one of nine paintings they own of The Redd Family Portraits.

Sharon (right) and Mack Cox (left) were honored with an award by the Madison County Historical Society presented by President Sharon Cox.

Mack Cox gives a presentation about the The Redd Family Portraits.

Rebecca Allen Redd was the sister-in-law to Matthew Harris Jouett.

The Madison County Historical Society had a special guest at their November program presentation.

The woman arrived at the Richmond Branch of the Madison County Library adorned in a 19th century white gown. Her brown hair was pinned back in a bun with curly tendrils hanging loose.

She was carried in by Kentucky Historians Sharon and Mack Cox, who own her portrait, painted by the famous Matthew Harris Jouett. Thursday evening, Mack Cox and his wife Sharon brought the painting and displayed it for the historical society members before giving an in-depth history of: "An American Story: The Redd Family Portraits."

The Cox couple own this historic painting, as well as eight others from famous Kentucky artists, Jouett and Oliver Frazer.

"As you know Sharon and I are collectors, and any time we find objects, we research," Mack Cox said to the audience. "Sometimes research can turn into an epic journey and that was the case of this painting of Rebecca Redd."

Matthew Harris Jouett was Kentucky's most celebrated artist, according to Cox. Jouett was also the brother-in-law to Redd, who plays a large part in the family's story.

Oliver Frazer, who was a generation later, was the most important Kentucky artist of his era, he said. Jouett's niece wed Frazer, and their daughter wed Jouett's nephew. They lived at Eothen, a Federal home located in Lexington where they assembled family paintings of both artists which hung at Eothen from about 1905 until 1934 and are called the Redd Family Paintings, an American art gallery featuring the work of two important southern artists.

The Cox's graphics-rich lecture told the story of these paintings from their creation to the present.

The Redd Family Portraits tell the story of the marriages, mentorship and geography that entwined the lives, Jouett (1788-1827) and Oliver Frazer (1808-1864), and their descendants. Cox told the stories, travels and adventures of these paintings as they moved from the first owners to the present with the backdrop of war, financial crises and cultural revolutions in American history to return to their original creation space in Kentucky.

The story begins with Jouett, born in Mercer County, in April of 1788, the second son of Captain John "Jack" Jouett, Jr. (Paul Revere of the South) and his wife Sarah "Sally" Robards.

According to Mack Cox, Jouett was educated at Transylvania College in Lexington. Following his graduation from Transylvania, Jouett studied law under George M. Bibb, Chief Justice of the Appellate Court of Kentucky. Jouett returned to Lexington about a year after beginning his studies with Bibb and began to practice law. Not long after he came to Fayette County, he married Margaret "Peggy" Henderson Allen on May 25, 1812.

That same year, a war was declared with England and Jouett entered the Third Mounted Regiment of Kentucky Volunteers enlisting as a 1st Lieutenant in the 28th United States Infantry Regiment, ultimately attaining the rank of Captain. He held this rank until his resignation from the army on January 20, 1815, according to the Jouett House Historic Site.

The already established painter returned to Lexington and in 1816, left for Boston to study portrait painting under the noted portraitist Gilbert Stuart.

Shortly after his studies began, Jouett was recognized as the best portrait painter west of the Alleghany mountains. Jouett maintained several studios including one in Lexington on Short Street, between the Northern Bank and the residence of the late D.A. Sayre. However, in 1825, Jouett relocated his Short Street studio to North Upper Street. It was in this North Upper Street studio where the Marquis de Lafayette sat for Jouett when he made his grand tour through the United States, according to the Jouett Historic Site website. In addition to this painting, some notable portraits painted by Jouett are those of Henry Clay, Alexander John Mitchell, Jr. and Martha Bell Mitchell (children), Dr. Horace Holley, Major Morrison, Governor Letcher, John J. Crittenden, Isaac Shelby, and a full length portrait of the Marquis de Lafayette, now owned by the Commonwealth of Kentucky and on display in the Old State Capitol in Frankfort, Kentucky.

Jouett also painted portraits of many of his family members, including his wife, two brothers, a sister and his mother.

Jouett was succeeded as a painter by Oliver Frazer (1808-1864), the most celebrated of his generation. They were related through Jouett's wife, Peggy Allen (1795-1873), who had two sisters. Elizabeth Allen (c. 1792-1840) wed Dr. A. J. Mitchell, and their daughter, Martha Bell Mitchell (1816-1903), grew up to wed Oliver Frazer, according to The Decorative Arts Trust. Jouett painted Martha and her brother (his niece and nephew) in 1826, but died before its completion. She was painted again in 1849 by Oliver Frazer (her husband) along with two of their children.

Jouett and Frazer lived on small neighboring farms just north of Lexington with their homes about 1,000 feet apart. Frazer bought his home from Jouett's other sister-in-law, Rebecca Allen Redd (1803-1866). Jouett painted all three Allen sisters and gave a landscape painting of his home to Rebecca Allen painted about 1818. Jouett had two studios, one in Lexington and one at his home, which was in the ell projecting from the left side of his home in the painting. It was a large room, open to the rafters with a dormer and large windows for lighting.

With both families in the home, their collection of paintings was one which earned the Eothen home a special artistic mystique.

Rebecca Allen Redd was married to Captain William Allen Redd and her four sons moved to Lafayette County, Missouri in 1857. During the Civil War, her son Oliver Frazer Redd became a captain in the Confederacy, serving as the aide de camp to General Jo Shelby. Shelby's wife Nancy Elizabeth and their son Orville lived with Mrs. Redd for much of the war.

All throughout the families' lives, the paintings were sold off, passed on after deaths and through marriages -- but were always encouraged by the family to keep the portraits that bound the families -- together.

In a nearly hour-long presentation, Cox spoke about the family, the portraits, each artists' style of painting, and how each piece went coast to coast, and found their way back together, and in the possession of the Cox family.

Before the Cox family acquired the portraits, they were handed down to Rick Han, a descendant of the Redds who lives in California.

"In his own words, Rick was raised to believe that the Redd portraits were apart of his heart and soul, and was approving under the eyes of his grandparents, and his great, great grandparents," Cox recalled.

When Han was to receive the paintings, they were being shipped on Sept. 11, 2001, barely missing the terror attacks on the World Trade Center. The portraits arrived safe in California to Han. However, he thought about the future, and how he wanted the Redd Portraits together in Kentucky and in the public eye.

Fishing for that person, he made a post on Ebay in 2011 with impossible terms. Mack Cox saw the post, and offered alternatives to his post, and asked if he had any other items from Kentucky.

He did. He had four portraits and wanted to speak with Cox. After Han googled Mack Cox's name, he found an article which showed the Cox family already owned a painting his cousin had sold. It was a painting of his grandparents, who had always taught Han to "Keep the portraits together."

"He believed our Ebay encounter was divine intervention," Cox said Thursday. "We came to terms and the paintings were returned to Kentucky in a wooden box."

Since the paintings arrived in Kentucky, the Cox family has made it their goal to share the art with the public eye. The paintings have been shared inside the Hopewell Museum in Paris, the Bluegrass Trust and Antiques Garden Show, Colonial Williamsburg in Virginia, Speed Art Museum, Jack Jouette House, and finally, the Madison County Historical Society.

"The Redd Paintings speak louder as a group than they do individually," Cox said. "So we have pursued them and now have nine. The family of Matthew Harris Jouett and the personal art of Oliver Frazer --two important Southern artists-- they have travelled from the Bluegrass to the Midwest, to the Mid-Atlantic to New England. From coast-to-coast to California and Kentucky. They have experienced war, and peace. They have swirled around a magical place called Eothen, the home of Oliver Frazer and neighbor to Matthew Harris Jouett. From 1905 to 1934, they were assembled there by descendants of both artists. It was a place so picturesque, the visitor upon first seeing it was struck with its appropriateness as the abode of an artist."

While the members of the board were in awe of the Rebecca Redd portrait, they were equally impressed with Cox's presentation. MCHS board member Donna Dodd Terrell said she was moved to tears.

"This moved me to tears," said Terrell. "I was sitting back here (wiping her eyes), I am glad I am in the back row. It was lovely, just lovely."

Sharon and Mack Cox were also recognized before the presentation with the James J. Shannon Award from the MCHS.

The Cox Family are both natives of Kentucky and graduated from EKU. They live in Madison County after retiring in 2017. Over many years, they have collected and documented early Kentucky antiquities with their collection having been described as one of the finest assemblages of Kentucky Antebellum material.