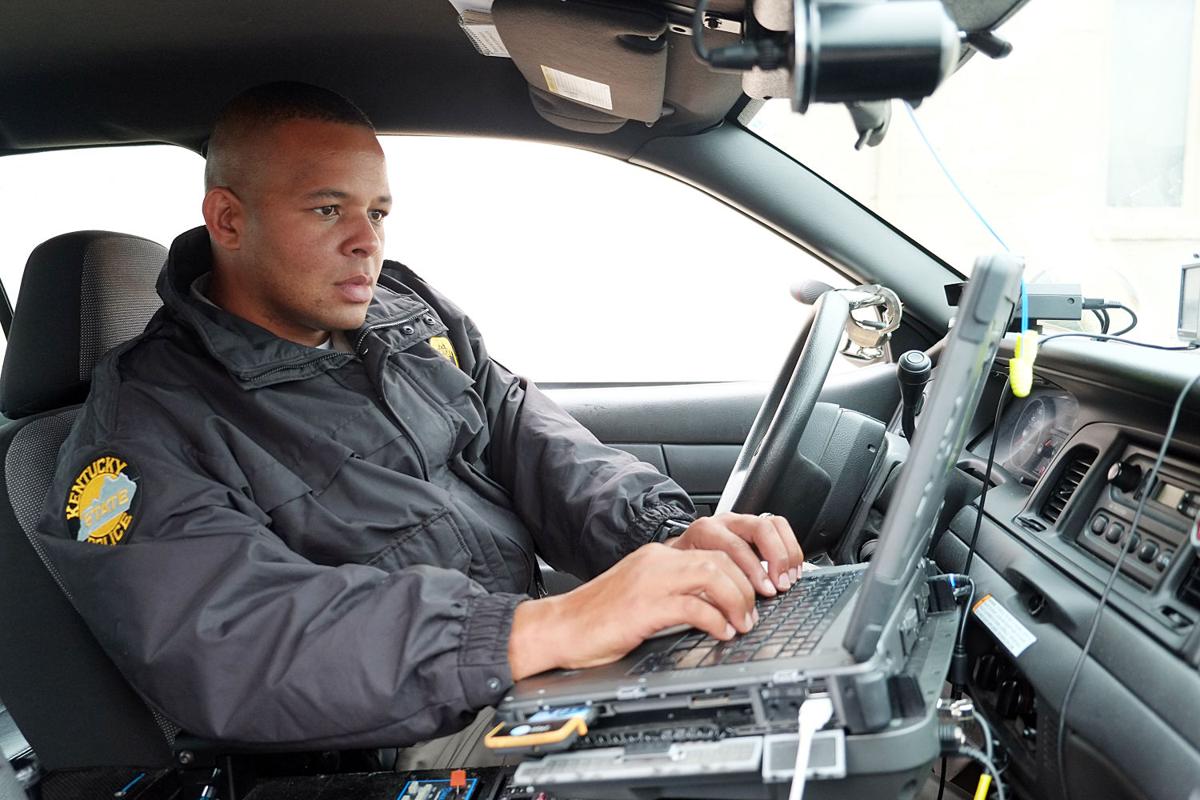 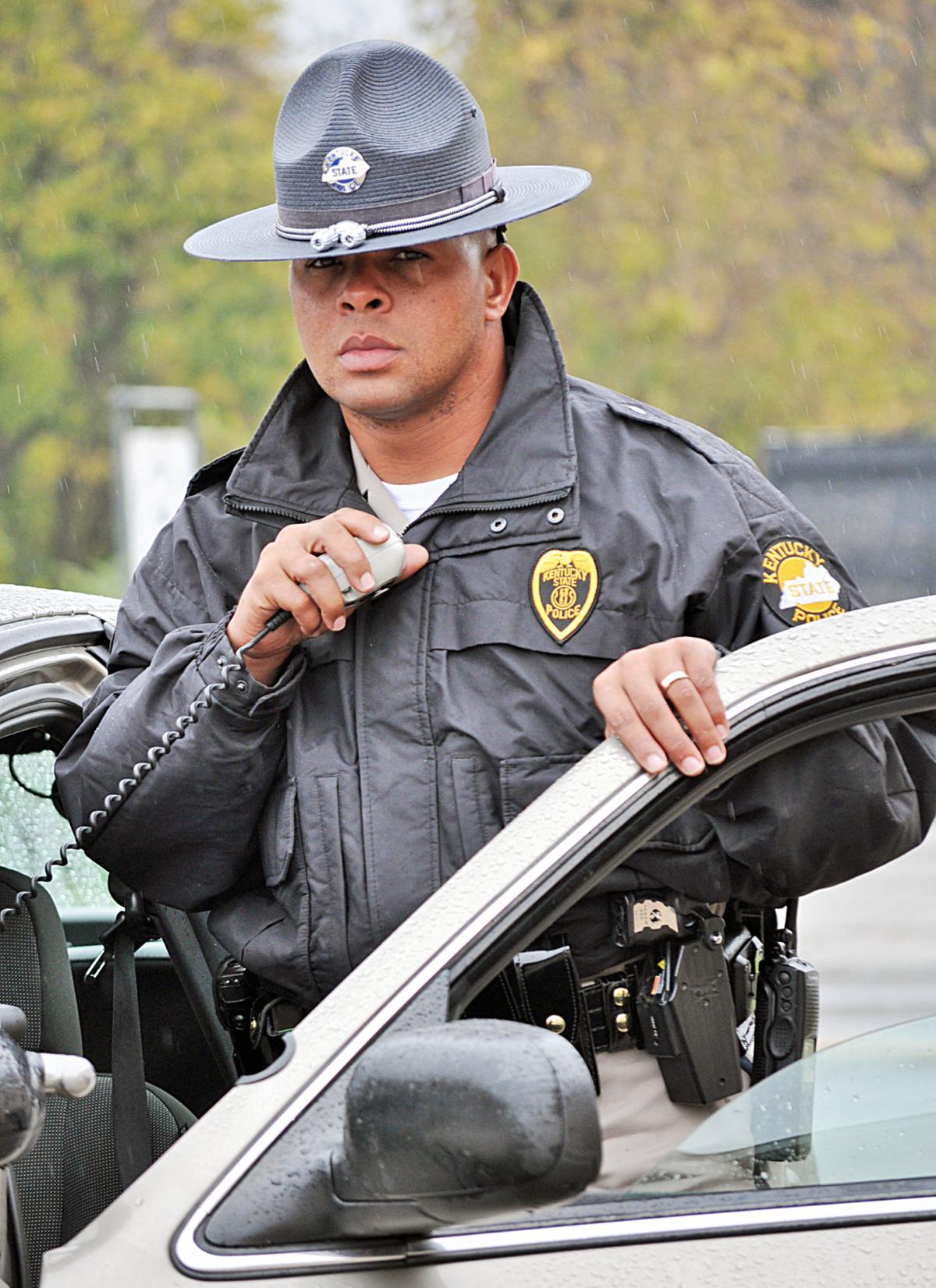 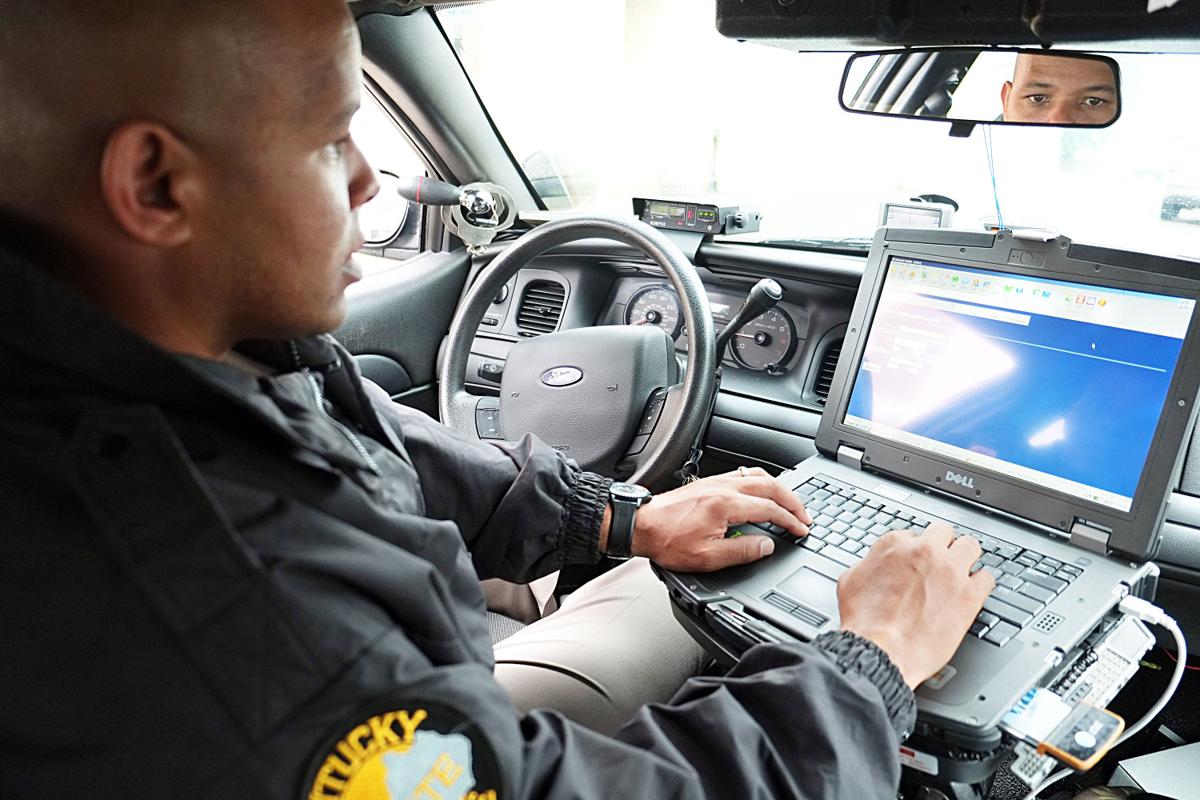 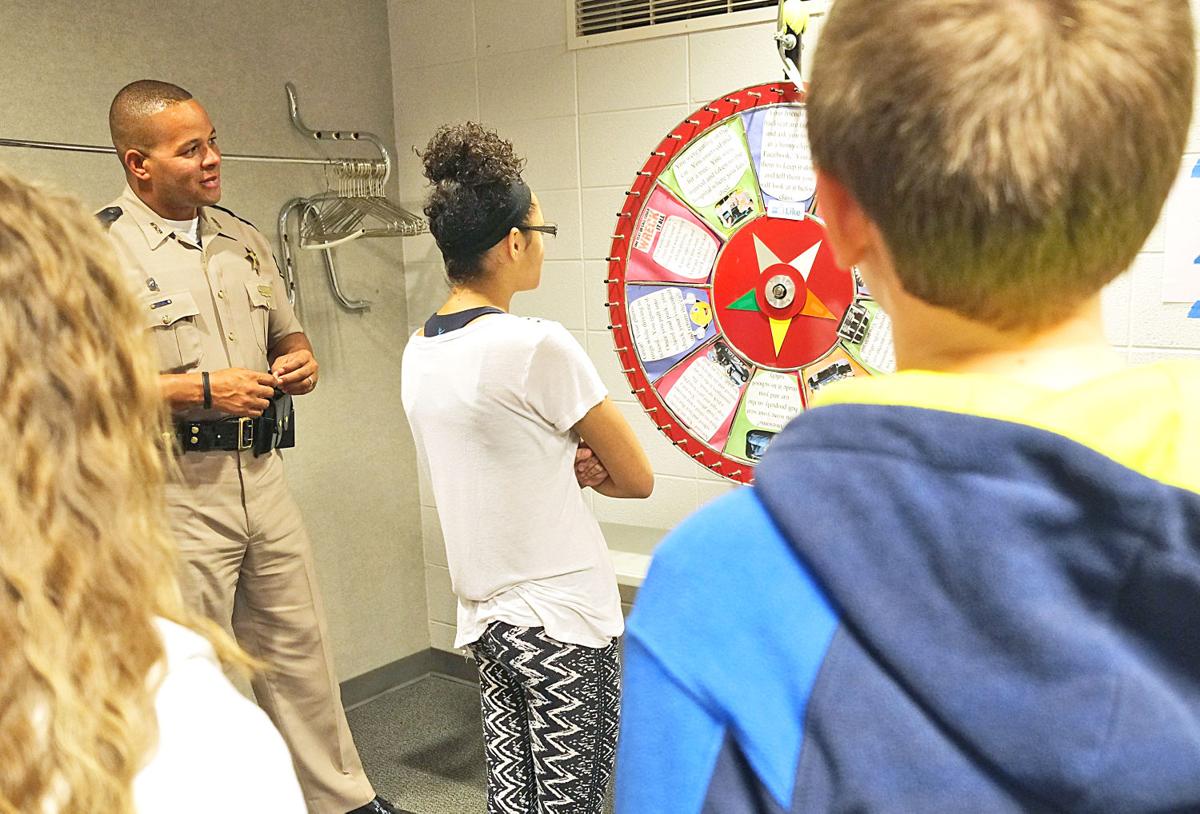 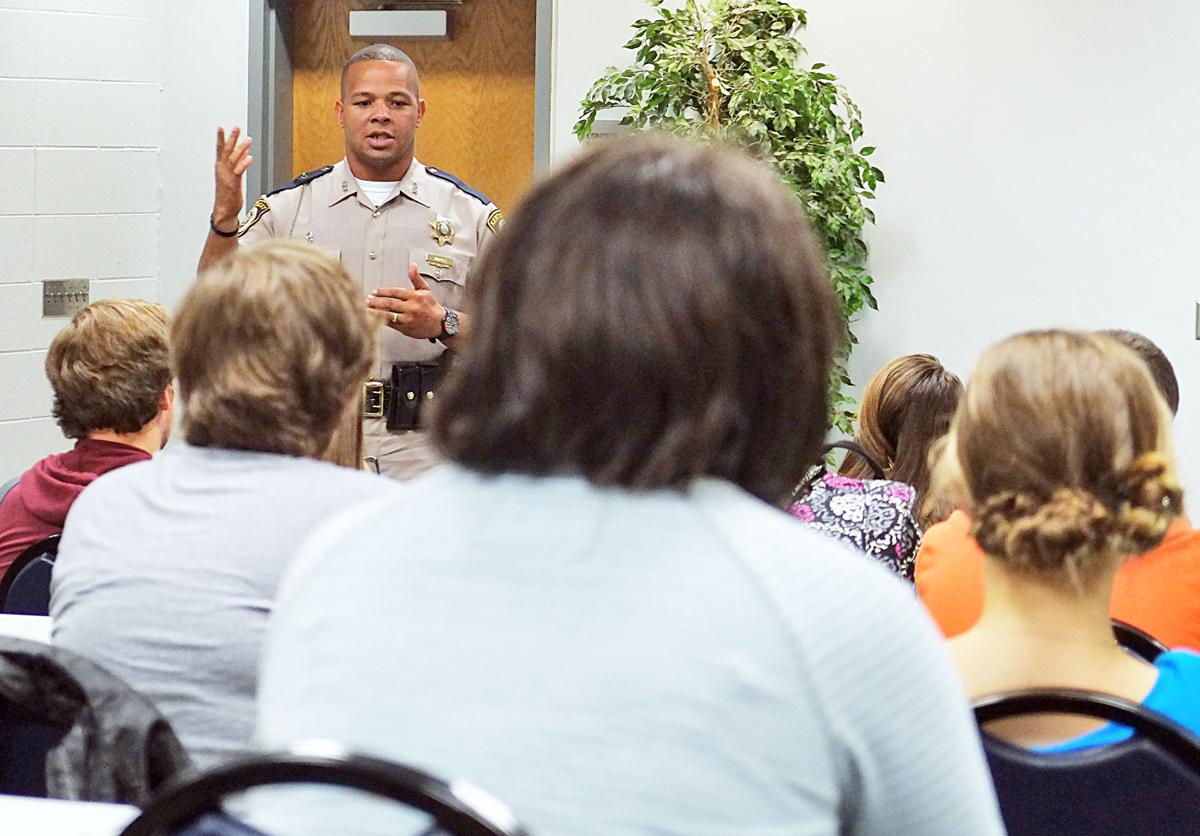 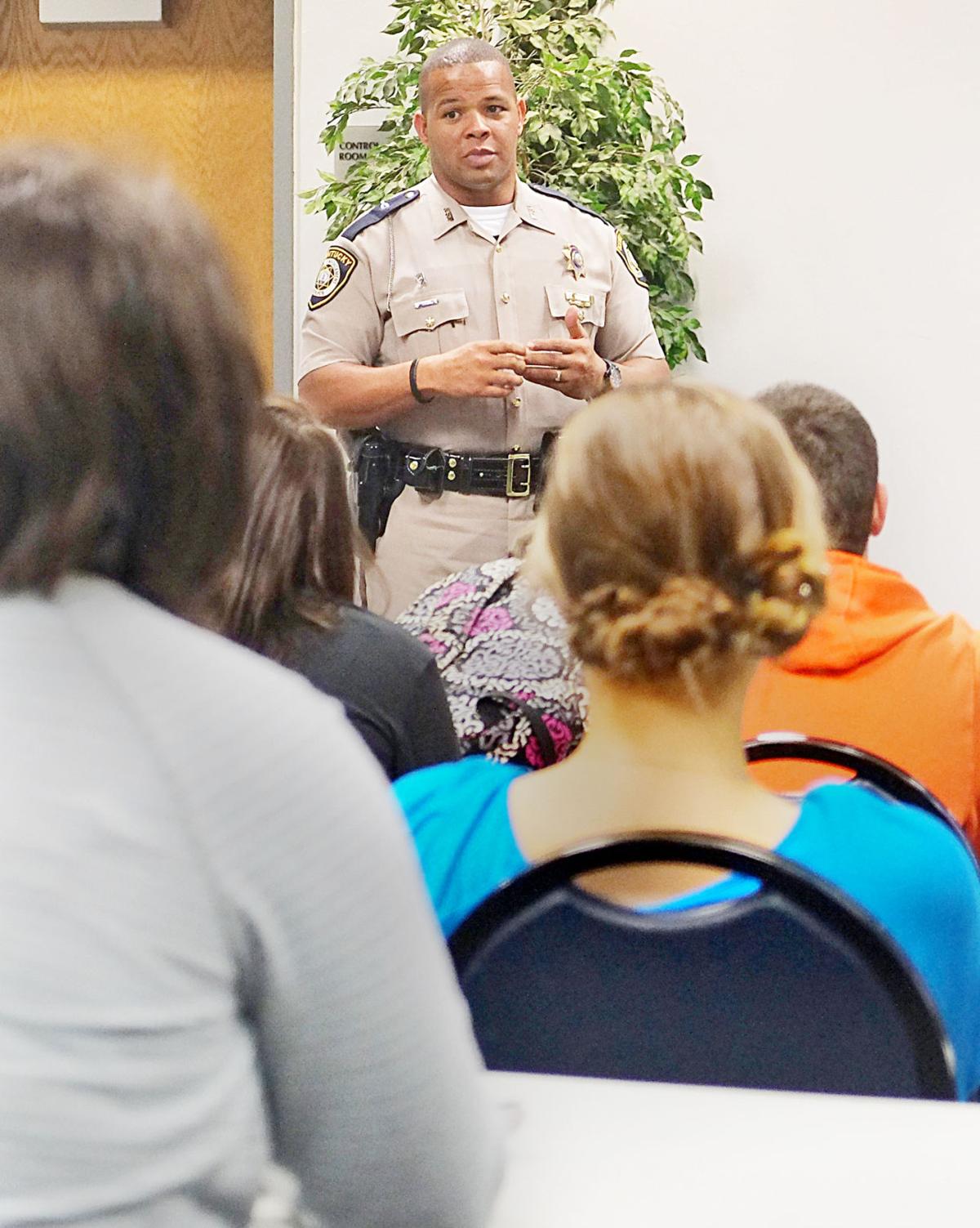 “Fair, firm and consistent” are three words that Charles Tinsley, a Kentucky State Police commercial vehicle enforcement officer, says he tries to apply in every phase of his life.

That ranges from his law enforcement career to volunteering as a football coach at Foley Middle School and the raising of his own children.

Tinsley, a law enforcement officer since 2003, began working for Kentucky Commercial Vehicle Enforcement before it was merged about six years ago with the Kentucky State Police.

Prior to becoming a police officer, he served for three years as a corrections officer after taking a swing at playing professional baseball.

“I’ve kind of seen both sides of the fence as a corrections officer and then a police officer,” Tinsley said.

He grew up in the small Harlan County town of Cumberland, the son of a coal miner and a homemaker.

“In my family, hard work was a way of life,” Tinsley said, “and I try to bring those values to my own job and my life.”

He said role models, in the form of family friends and others in his formative years who worked in law enforcement, had a positive influence on him and sparked his interest in a career in the profession.

A graduate of Cumberland High School, he studied police administration at Eastern Kentucky University, where he also played football.

In addition to working the Kentucky highways as a commercial vehicle enforcement officer, Tinsley is also public information officer for his agency’s Region 5, based in Morehead, that includes the Richmond and Ashland areas. When he’s not ensuring that big trucks are in compliance with state and federal regulations, Tinsley deals with the media, providing information about commercial vehicle enforcement activities, including accidents involving commercial vehicles. He also works on his agency’s public service projects. It’s a role he’s played for about six years.

“I try to provide accurate information to the media as quickly as possible when there’s a matter of media interest involving commercial vehicle enforcement,” he explained.

Tinsley was recognized for his efforts this fall when he was named 2014 Kentucky State Police Commercial Vehicle Public Affairs Officer of the Year.

He was cited for his “unparalleled dedication and support of Trooper Island Camp,” a summer camp for economically disadvantaged Kentucky children ages 10 to 12. It was noted that Tinsley personally sold 550 raffle tickets to help provide funding for the camp.

When discussing the award, Tinsley is emphatic about sharing credit.

“My name might be on it, but (the award) was a team effort, and there are so many other people – the men and women I work with – who deserve to share the credit. I always say “We” won the award. There’s no “I” in it,” Tinsley said.

Trooper Island, really is an island, a 34-acre island, on Dale Hollow Lake in south-central Kentucky. It provides a free week-long camping experience for children selected by state troopers from the state’s 120 counties. The children who attend include not only economically disadvantaged youth, but those who are vision or hearing impaired and those who are medically at-risk who might not otherwise get the opportunity to attend a summer camp.

The program is intended to help develop campers’ self-image, build their bodies through nutritious food and exercise, develop mental capabilities through classroom study and develop a respect for the law and pride in their communities.

Tinsley noted that no state funds are spent on the operation of Trooper Island. All phases of the operation are funded through tax-deductible contributions from individuals, industries, civic and business groups, and state police personnel.

While some may assume that campers are kids who have been in trouble with the law, that’s not the case, Tinsley said. It’s simply an opportunity for kids who may never have the chance to go to summer camp.

“Really, it gives kids a chance to see our good side,” Tinsley said of state police troopers and officers. “For some of these kids, the only time they see us might be when we’re called to their homes on official business. The camp lets them see a more positive side. In fact, during the camp we wear our uniforms only once. The rest of the time they just see us as people in plain clothes.”

He has found that working with the kids on Trooper Island, which serves about 700 campers each year, is a two-way street.

“I think that since I’ve been going to the island, I’ve been getting as much, if not more out of it than the kids do,” he said, citing the good feelings and sense of satisfaction he gets when working with the kids.

To learn more about Trooper Island, go to www.kentuckystatepolice.org.

Tinsley has a love of athletics which has been evident throughout his life. Upon graduating from high school, he was recruited by the Philadelphia Phillies and played minor league ball as an outfielder in both Clearwater, Fla., and Martinsville, Va., spending a year in each town.

He also played football as an outside linebacker at EKU.

His enthusiasm for sports and working with young people has also manifested itself in his dedication as an assistant football coach at Berea’s Foley Middle School. He started coaching when one of his sons was on the team, but which he has continued for several years after his son graduated.

In addition to writing news releases and facilitating media inquires as part of his public information officer position, Tinsley also presents programs on the dangers of drunk and distracted driving and proper use of seat belts at local high schools he also uses his expertise as a certified child safety-seat technician to educate parents on the proper installation and use of the seats at venues such as stores, churches and schools.

As for his vehicle enforcement duties, Tinsley wryly noted that because his vehicle and those of fellow officers are marked “Commercial Vehicle Enforcement,” some drivers wrongly assume that his jurisdiction is limited only to commercial vehicles. As a sworn officer, his duties extend to enforcement of all traffic and other laws.

“Sometimes non-commercial drivers zip by us like we’re standing still because they don’t think we can ticket them, but they soon learn differently,” Tinsley said.

Not to worry, though. As in all other aspects of his life, Officer Charles Tinsley Jr. enforces the law in a “fair, firm and consistent” manner!