Dramatic skies show a storm moving through the Moore, Oklahoma area Wednesday night. Vehicles were flipped and buildings were damaged in what was believed to be a tornado. 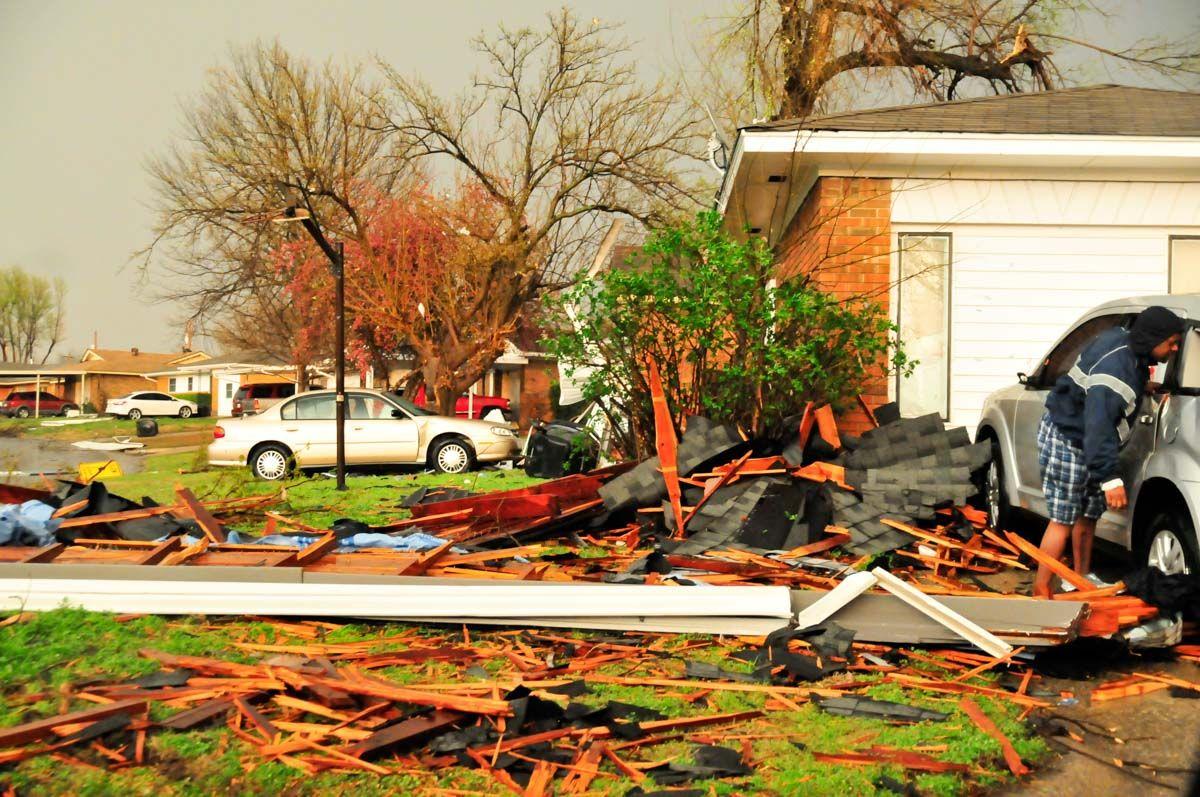 Homes sustain damage after a tornado that passed through Moore, Oklahoma Wednesday, March 25, 2015.

Dramatic skies show a storm moving through the Moore, Oklahoma area Wednesday night. Vehicles were flipped and buildings were damaged in what was believed to be a tornado.

Homes sustain damage after a tornado that passed through Moore, Oklahoma Wednesday, March 25, 2015.

MOORE, Okla. -- Severe storms blew through Oklahoma on Wednesday night, killing one person in a mobile home park near Tulsa and causing damage in the town of Moore, which was devastated by a deadly tornado less than two years ago.

No rating has been assigned yet to what was believed to be a weak tornado that briefly touched down in Moore, flipping vehicles and damaging buildings.

“There was a tornado but there is no rating. That's pure speculation,” said Kevin Brown, National Weather Service meteorologist. “We don't determine a tornado rating until the damage is assessed. What we've seen so far is very minimal, but we need to get boots on the ground.”

The storm downed power lines and prompted public school officials in Moore to cancel classes for Thursday. About 36,000 people in the metro area -- including Oklahoma City, Mustang, Warr Acres and Yukon -- were without electricity Wednesday night, according to OG&E officials.

The storm also caused problems on area roadways; a three-vehicle accident on Interstate 35 southbound involved a semi truck, which overturned. There were no injuries reported. Oklahoma Highway Patrol Trooper Jeff Cummings said that all three drivers said the wreck was a result of the wind, which they believed to be from a tornado.

More than 100 miles to the northeast, in the town of Sand Springs outside Tulsa, one person was killed when the storm struck a mobile home park, according to the Tulsa County Sheriff's Office. It was not known late Wednesday whether the damage was caused by a tornado or straight-line winds.

In Moore, people seeking care and medical staff at the temporary Moore Medical facilities are safe and accounted for after the tornado reportedly touched down in the area. Safe rooms to accommodate staff and patients during inclement weather were constructed as part of the temporary emergency services established after the Moore Medical Center was destroyed in the May 20, 2013 tornado. That storm killed 24 people, including seven elementary school children, and injured 377 other people.

“We had some damage to the awning and some other slight damages, but all patients and staff are safe and we are open for business,” said Richie Splitt, Chief Administrative Officer of Norman Regional HealthPlex and the Moore Medical Center. “We never missed a beat in caring for those in need.”

Jim Thomas at Southgate Pentecostal Church said that he could see the tornado coming and was trying to hold the door shut but the wind became too strong. Thomas ran back inside of the church and both doors blew open. Thomas reported that winds he believed to be 35 miles per hour blew through the hallway. The event was over in about two minutes, he said.

About 20 people were gathered in the church for fellowship.

Along Janeway Avenue, evidence of tornado damage included missing roofs and debris. Crews were on scene to clear the roadways and power was out.

Details for this story were reported by The Norman (Oklahoma) Transcript. The Associated Press contributed to this report.

Severe storms blew through Oklahoma on Wednesday night, killing at least one person near Tulsa and causing damage in the town of Moore, which …